Setting up network routes: the choice of connection used for the Internet; simultaneous use of multiple connections for different purposes

1. How in Linux to choose the connection used for the Internet

2. How to simultaneously use multiple connections for different purposes

3. Using OpenVPN for all connections except for certain IP addresses, networks or sites

4. Setting computer as a network gateway

I already talked about ‘How to switch between Internet connections in Windows’, now we will consider the same question for Linux. In addition, I'll show you how you can use both connections to the Internet at the same time, for example, through one you can scan, and through another you can simply surf websites. And also I will show a couple interesting tricks.

How in Linux to choose the connection used for the Internet

A computer can be simultaneously connected to several networks and any one of them can be used for Internet access. In order to access the global network, in fact, only one network is used, and the other (or others) are in reserve. The operating system selects the connection that has the best characteristics. If you want to switch between Internet connections without disconnecting from the one that is used by default, that's what I'm going to show now.

If you followed the link I gave just above (switching between Internet connections in Windows), then you know that for each network interface there is a so-called default route - through this route all traffic that does not correspond to other routing rules pass. If your computer is connected to several networks, the system keeps several default routes at once, but assigns them the so-called metrics - the rating of the connection quality. The lower this value, the higher the connection priority.

To see the default routes, use the command:

An example in my case (I'm connected to two networks):

It is seen that I have two default routes for the network interface wlo1 and wlp0s20f0u1. And the first metric is 600, and the second metric is 601. Since the first value is less, the first connection has priority.

In order the system to start using wlp0s20f0u1 and wlo1 keep in reserve, we need to set the metric for wlp0s20f0u1 to any value lower than 600.

In subsequent commands, replace the interface names with their names on your system - they may differ. Also adjust IP addresses.

You cannot change the route, so we will delete the default route of interest, and add exactly the same, but with the new metric. Pay attention to the peculiarity - both my routes have the same IP address of the gateway (router), so that the system understands exactly what we want from it, will also indicate the name of the interface.

Delete the default route for the wlp0s20f0u1 interface:

Add the default route for the interface wlp0s20f0u1 (also specify the router’s IP):

The metric for wlp0s20f0u1 is changed:

Checking the external IP address also shows that now the Internet connection is performed via wlp0s20f0u1. By the way, the Wi-Fi level indicator in NetworkManager began to show the signal for the network on wlp0s20f0u1.

The changes you make will disappear when you reboot your computer. Or you can return everything as it was again deleting the route for one of the interfaces and adding it again with the previous metric value.

How to simultaneously use multiple connections for different purposes

This can be done by specifying routes. Routes are rules that answer the question: a request to this IP on which interface to transmit?

You can see the available routes with the following command:

Example in my case:

The meaning of the first two lines with default via string was considered a bit higher - these are the default routes. Consider the other two:

wlo1 is already the default route, so we do nothing with it.

Now, for testing in practice, we look at the values of the transmitted and received data for network interfaces: 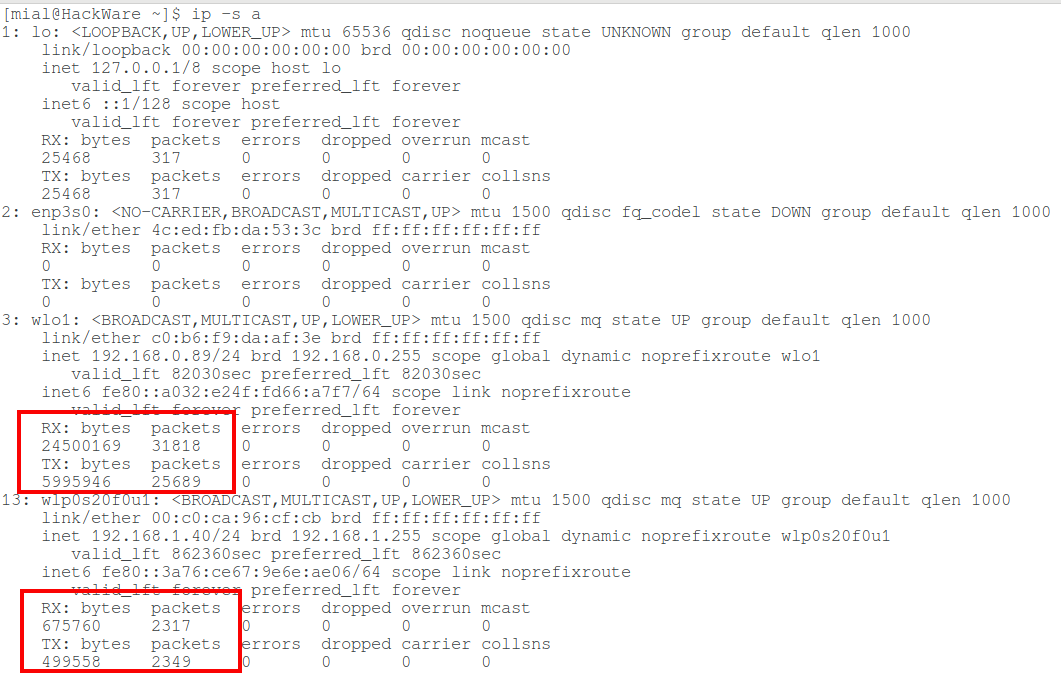 I will open a website, for example miloserdov.org. Again we look at the statistics: 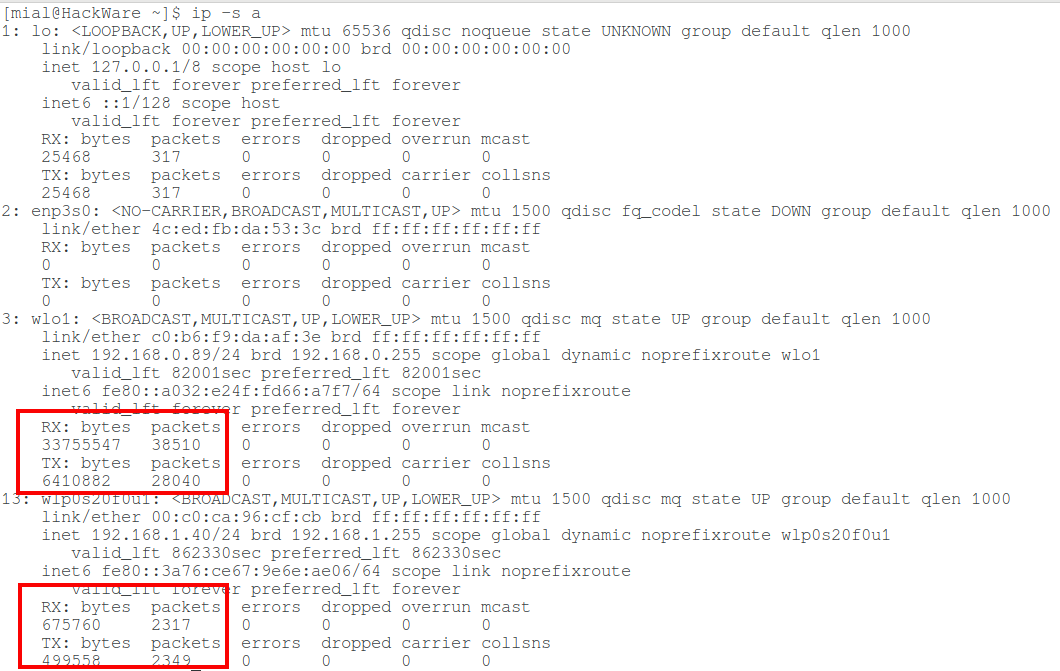 For wlp0s20f0u1, the values have not changed. 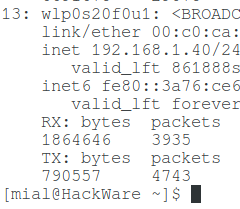 You can add any number of routes. You can also add one IP address (not subnets):

Using OpenVPN for all connections except for certain IP addresses, networks or sites

If you access the Internet through OpenVPN, then when establishing a connection to OpenVPN server, a new default route is created, for example:

I think you already guessed that if we want to connect to a site or subnet bypassing OpenVPN, then it is enough for us to create a new route with a lower metric. In this case, you do not need to touch the route with interface tun0. As a result, it turns out that all connections will be made through OpenVPN, but when accessing the sites for whose IP the special route was set, the connection will be performed bypassing OpenVPN. By the way, the metric need not be lower - because the default route is used only in those cases when there is no special rule. That is, if you created a special routing rule for the IP address 185.117.153.79 with a metric of 500, then in the case of accessing address 185.117.153.79 such a rule will take precedence over the default via 10.8.0.5 dev tun0 proto static metric 50 rule, since it is a certain rule, and the default route leaves only those packages that did not leave earlier by any special rule.

Setting computer as a network gateway

You can configure other devices on the network so that they will not use a router as a gateway, but a specific computer on the local network. Traffic transmitted to this gateway-computer can be analyzed, or, for example, transmitted to the outside world via Tor or VPN. This is a bit like a man-in-the-middle attack. The difference in the methods of achieving the result: with MitM attack, manipulations with the ARP cache are performed. Here we just set up another computer to use our computer as a gateway.

I will show you the example of two computers running Linux.

On the first, I enable routing of incoming traffic:

The previous command is a complete analog of this command:

In addition, on the first computer, I run Wireshark to monitor traffic. As the filter I input icmp. The ICMP protocol is used for ping, tracing, and through this protocol errors are transmitted, such as ‘host unavailable’, ‘network unavailable’ and the like.

On the second computer, I trace route to the site:

I turn to the first computer and see that the traffic really went through it. 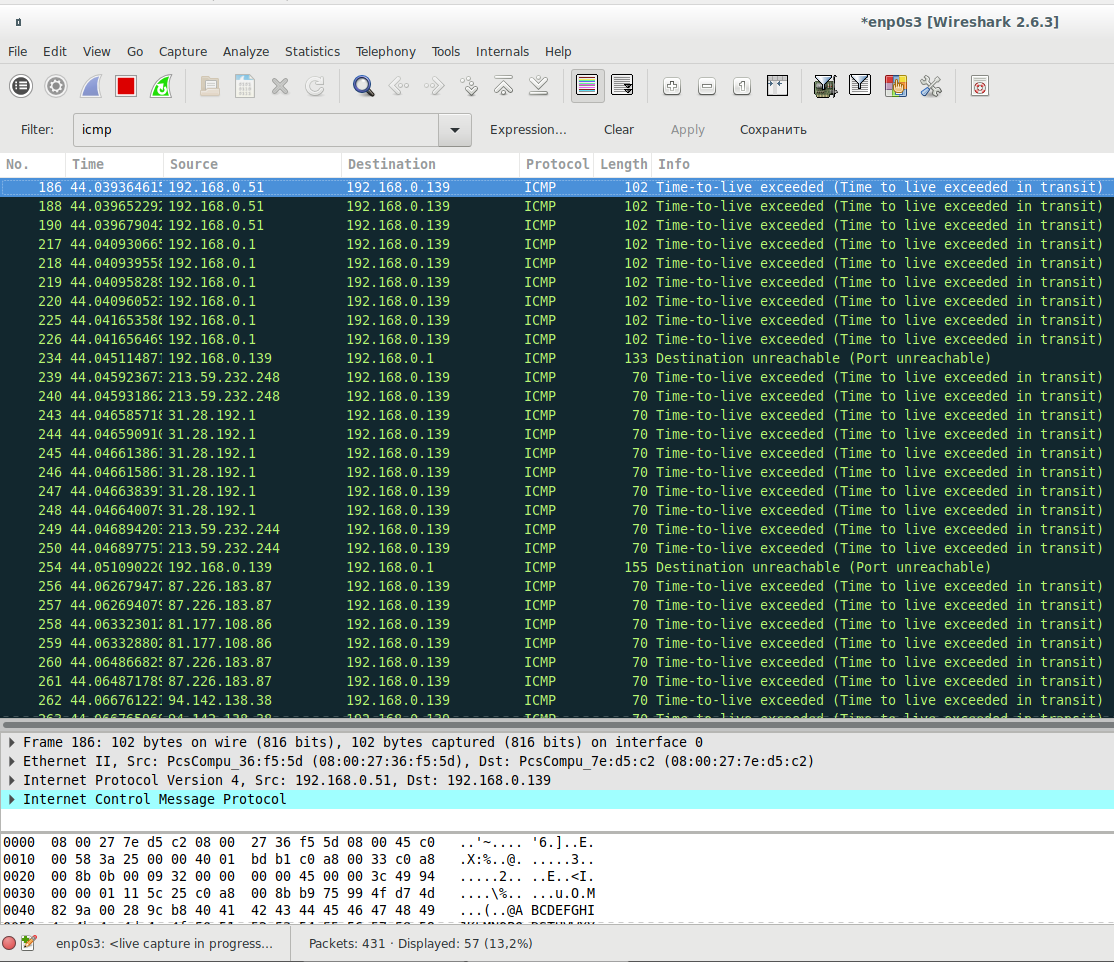 On the second computer I run ping:

On the first computer as a filter I set

This filter means showing only pings:

This works not only for the ICMP protocol, but also for other traffic. For example, on the second computer in a web browser, I open a website, and on the first computer I use a filter 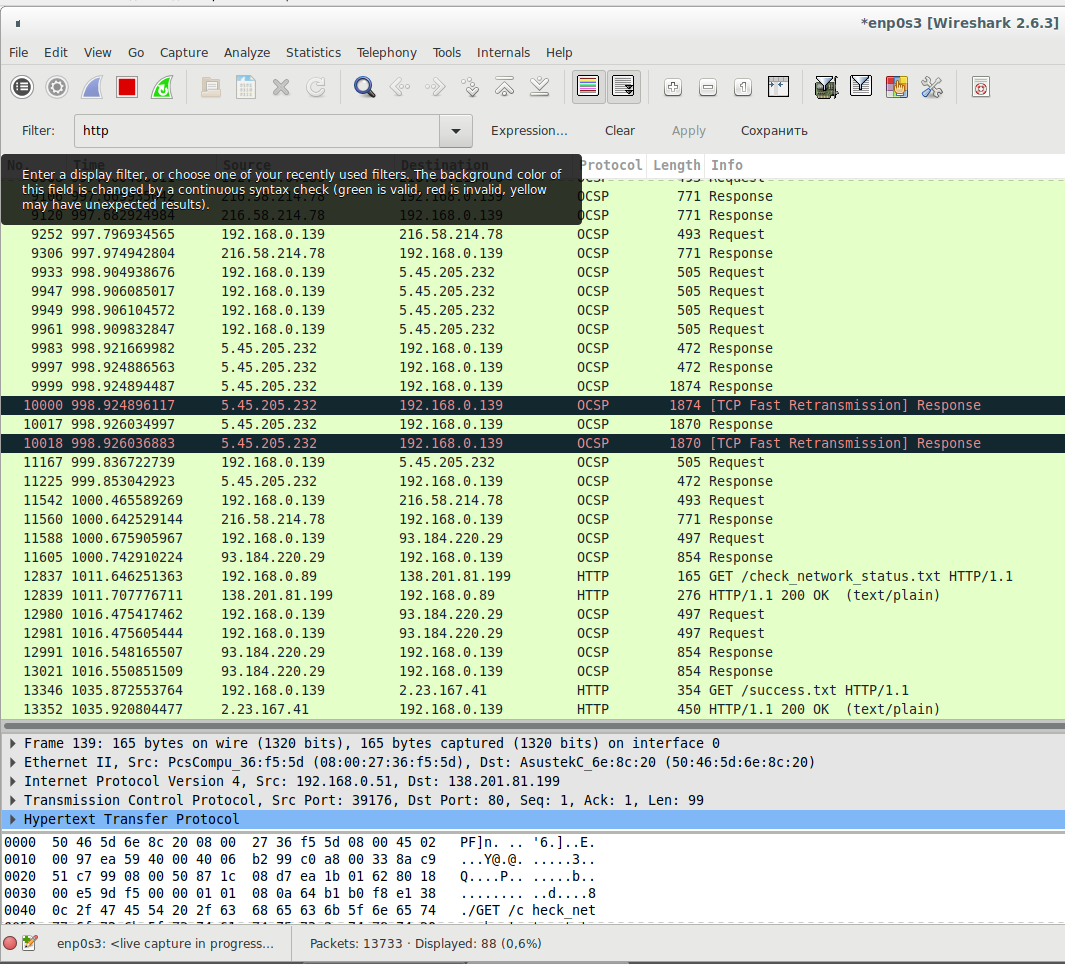 You can see the web traffic for which the destination and the source address is 192.168.0.139, this is the IP address of the second computer.

Understanding how network routes work, you can very fine-tune the use of any network interfaces in your system.

These same principles for creating routes (and even these same commands) also work in routers.

If you want, you can turn one of the computers into a router (including plugging the Internet provider’s wire into it) and use it to analyze traffic, or very fine-tuning the rules that may not be available for your router.

For Windows systems, you can also configure routes for individual networks and IP by using the ROUTE command. With it you can set not only the default route, but also for networks and addresses, instead of 0.0.0.0 MASK 0.0.0.0, it is enough to specify specific IP addresses and network mask.