How to switch between Internet connections in Windows

2. How to change the default route in Windows

3. How to set the metric for network connections in Windows

4. Features of the route CHANGE command in Windows

5. Creating persistent routes that persist after a reboot

If you have Linux, see the article ‘Setting up network routes: the choice of connection used for the Internet; simultaneous use of multiple connections for different purposes’ In it you will find additional tricks for manipulating network routes that will work on Windows also.

If you go online, how does the operating system choose which of several connections to use? The system acts very wisely - it does not neglect any of the connections. And in case of one of them fails, it uses another connection.

But after all, in any case, OS needs to choose which connection to use at the moment! And the system again operates wisely - it uses the best connection. To find out which connection is best, the so-called Metric (a conditional value that takes into account several parameters at once - network speed, packet loss, and so on.) is calculated for each of them.

Let's consider a real example. My computer is connected to two Wi-Fi networks. To learn the characteristics of the routes, open the Windows command line, for this press Win+x, and select Windows PowerShell (Administrator). In the command window that opens, type the command 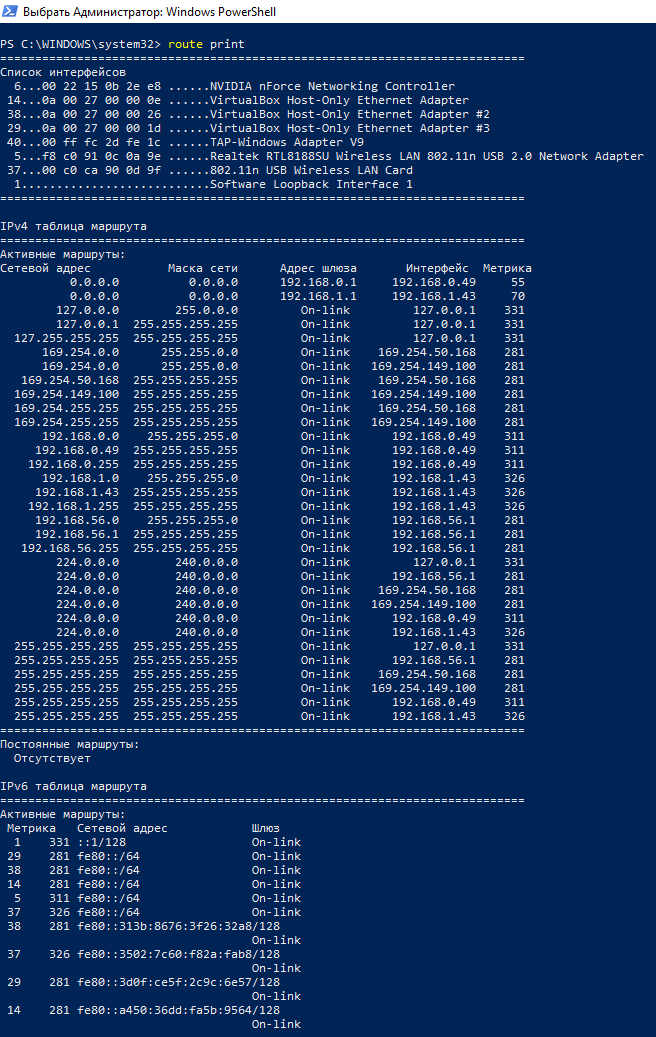 Pay special attention to the lines:

The network address is 0.0.0.0 and the netmask 0.0.0.0 is designation for the default route. The default route is the route to which traffic is sent, for which there is no other certain route.

For example, there we can see the line

But requests to any other IP that is not in the table (i.e., for which no certain route is specified), then it will be sent by default route - this is what is specified for the network 0.0.0.0 with the mask 0.0.0.0. The most typical traffic sent by default route is Internet traffic (as well as traffic to other local networks to which your computer is not directly connected - but for home networks this is a rare situation).

How to change the default route in Windows

Let's return to the previously received information about default route:

Let us verify this in several ways. Let's remember our IP addresses, as external services see them. For this I use to https://suip.biz/?act=myip:

So, there are several ways to change the default route. For example, you can change the metric value so that another route becomes a priority. The second option is to delete the other routes, leaving only one.

How to set the metric for network connections in Windows

To be clear, I will show you a concrete example. I have two network interfaces with IP addresses:

To do this, I delete all default routes:

Now I add the one I want to make the default route by a command of the form:

In it, the GATEWAY must be replaced with the IP address of the gateway (router) of the interface through which you want to go online. For me it:

At this stage, the Internet connection has already returned and if one connection is enough for you, then you may stop here.

However, I want the second connection to be active as a backup, but it should not be used by default.

To add it, use the following command:

Note that instead of the GATEWAY, you need to enter the IP address of the gateway of the ‘backup’ interface. In addition, the value is not absolute, but relative!!! Remember, that the specified value ADDS to that value of the metric that the operating system calculates. The value of 100 can be changed to another (for example, 50). But choose it so that the value in total with the calculated metric was greater than the metric of connection that we want to use by default.

Let's check the IP in the browser https://suip.biz/?act=myip:

At the Windows command prompt, I do the following:

Features of the route CHANGE command in Windows

It should be noted a couple of points in the behavior of the route command, which are counterintuitive (we are waiting for one result, but we get another, unexpected result).

It is not necessary to delete/add routes, including the default route, it can be modified using the route CHANGE command. But remember the peculiarity of this command, if you have two or more default routes: it will delete ALL routes and set new one that is specified with this command! At first glance this is not obvious, but if you think about it, it becomes clear why it acts in this way.

Although this has already been said above, the value of the metric is RELATIVE! The value that you set for the metric is added to the value calculated by the system. At the same time, it constantly floats: that is, the system regularly recalculates the metric values, but adds to each received number the one that you specified with the route ADD command.

Creating persistent routes that persist after a reboot

By default, all set routes, including metric values, will be reset when the computer restarts.

Using the -p switch, you can create persistent routes that will be saved after a reboot.

Example of adding a permanent route:

Part if <interface_ID> is optional for all commands.

The interface numbers can be seen by the route print command (at the very top of the output):

The interface numbers stay in the first column - before the MAC addresses.

In addition to the -p option, the route command has a few more options, consider them.