Successfully captured handshake can be hacked by various programs. If you manage to configure proprietary video card drivers, then, of course, it is recommended using Hashcat to brute-force passwords. The speed of cracking will be much higher.

If you want to brute-force WPA PSK passwords with only the power of the CPU, then Aircrack-ng is one of the suitable programs. Disadvantage of this way it does not use a video card. Another big disadvantage is the lack of support for masks, rules and other brute-force options. Although the last drawback is leveled by the fact that Aircrack-ng can be paired with other programs that support these masks, rules, and password generation on the fly.

Another advantage of the program is that it works fine under Windows.

The easiest way to use Aircrack-ng is:

Although the command is simple, we explain that:

So, my dictionary is located in the /home/mial/2ndHDD/newrockyou.txt file, the access point is named dlink, and the handshake file is called dlink-02.cap and is located in the current working directory, then I compose the command: 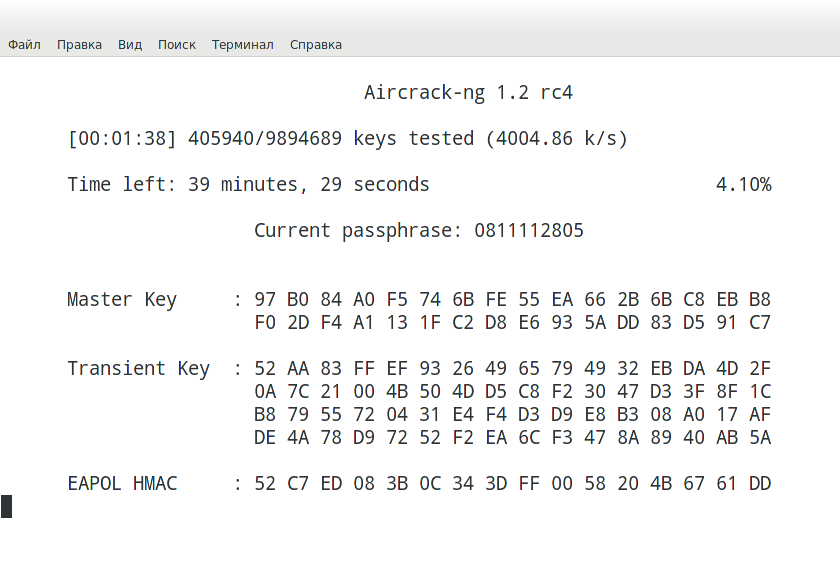 As you can see, all eight cores of the CPU are fully loaded: 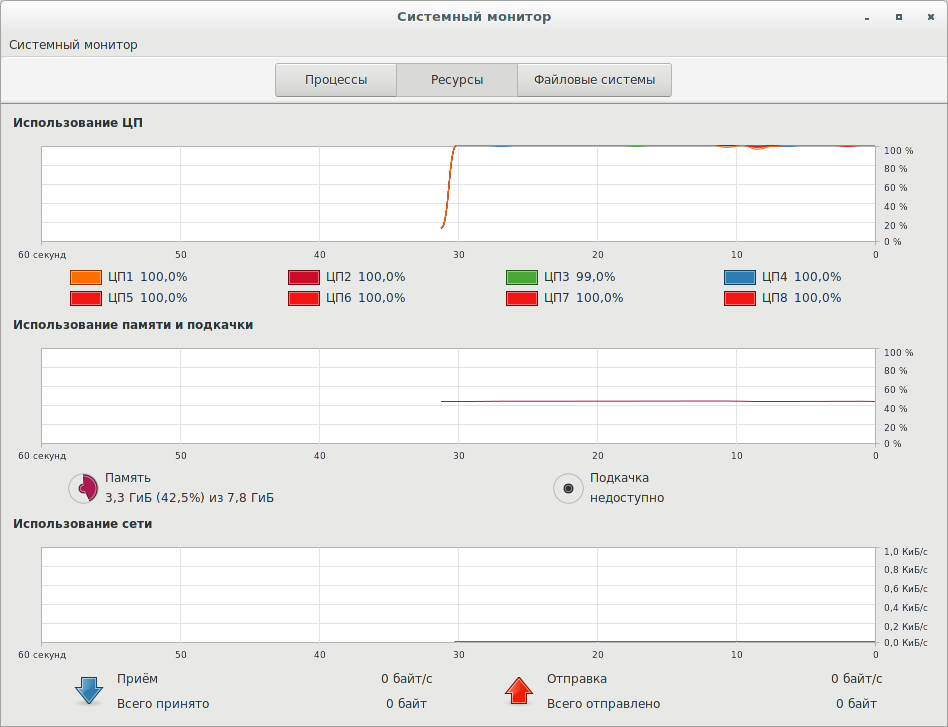 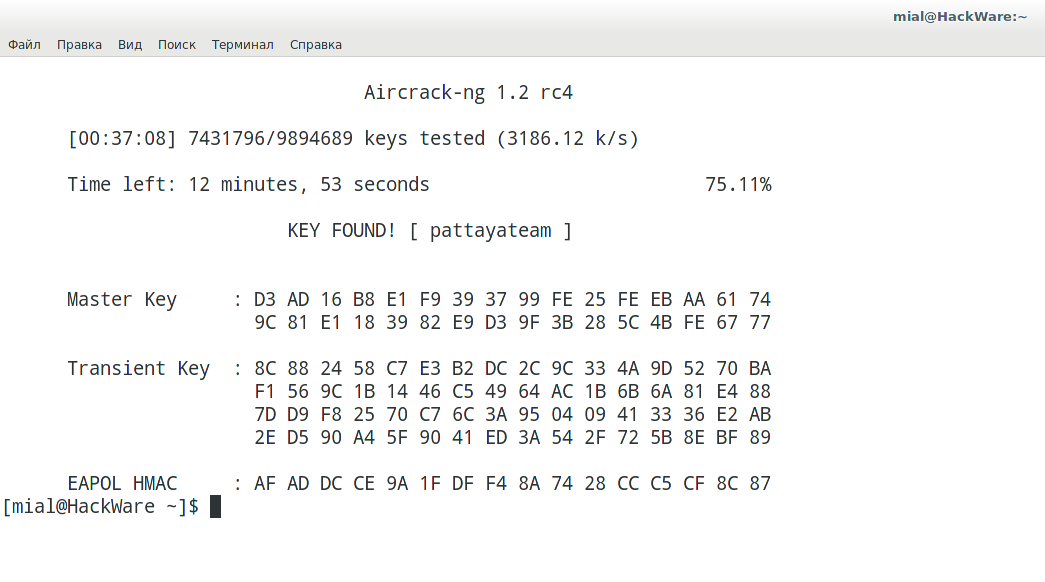 This is what the KEY FOUND! inscription tells us.

Using passwords created in other programs in Aircrack-ng

Aircrack-ng can work with any programs that output passwords to standard output. To do this, use the same -w option, but instead of specifying the path to the dictionary, you need to put a dash (-). And pass the passwords themselves via a pipe (|) from the generator program to Aircrack-ng. In general, the command looks like this:

In order not to crack passwords, but only to show candidates, Hashcat has an option --stdout

We also need to specify the hacking mode (option -a) and the mask itself.

As a result, the command to display passwords looks like this:

The command to transfer generated passwords from hashcat to aircrack-ng for my data looks like this:

The maskprocessor program is part of the hashcat package. Its purpose is to generate candidates for passwords by mask. Using maskprocessor is even easier than hashcat itself, which without the necessary dependencies will not even start on some systems.

The command syntax is very simple:

For example, for my matched password, the mask could be pattaya?l?l?l?l. Check: 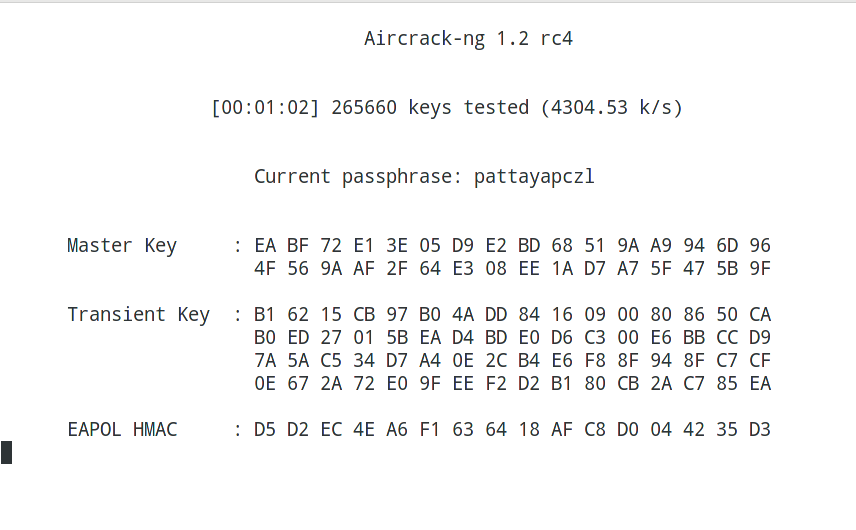 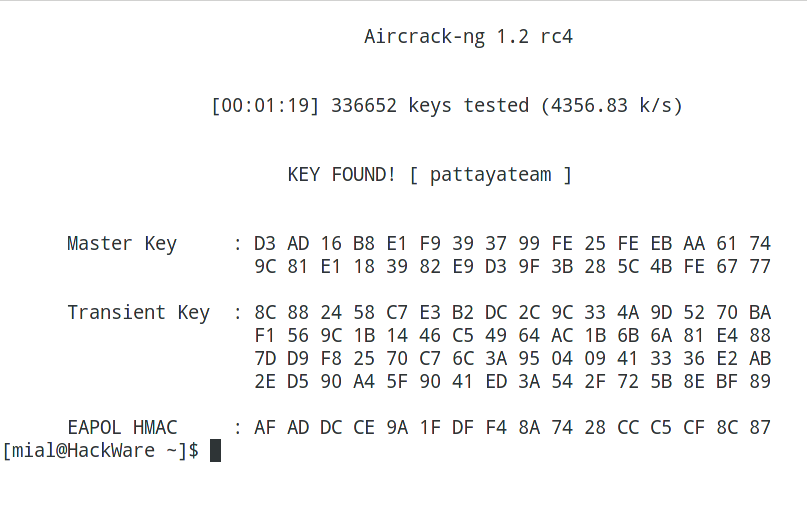 Crunch is a dictionary generator with passwords in which you can define a standard or specified encoding. Crunch can create a list of words with all sorts of combinations and permutations in accordance with specified criteria. The data that crunch prints can be displayed on the screen, saved to a file, or transferred to another program.

A simple example of use:

In general, Crunch is a very flexible program, and in order to use it 100% you need to study its options and familiarize yourself with the examples. You can find various examples of crunch usage on the page: https://en.kali.tools/?p=182

For my case it would be possible to do this:

Hacking Wi-Fi Passwords in Aircrack-ng with John the Ripper

John the Ripper supports the output of candidates (option --stdout), as well as various rules for generating passwords. John the Ripper has its own syntax, but in general, you can achieve the same result as with the programs already reviewed. Therefore, if you are more familiar with John the Ripper, you can use it in commands like this:

Since the Aircrack-ng package is cross-platform, it is possible to hack WPA handshake in Windows. Go to the official website, download the version for Windows, unzip the downloaded archive.

Change to the directory where the executable file aircrack-ng-avx.exe is located (your path will be different):

An example of starting hacking: 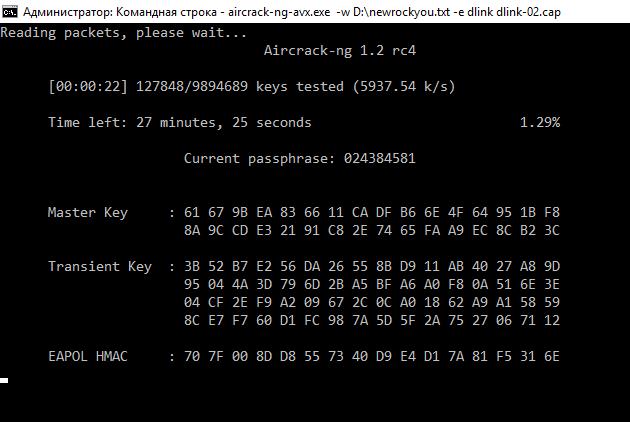 By the way, you will find three similar files:

Try them all - they will have different performance, and some may not start.

Aircrack-ng combines well with password generators and can work under Windows. However, much greater results can be obtained by cracking the password using a graphics card (GPU cracking).