Wireshark has a huge variety of different filters. And there is a huge documentation devoted to these filters. This documentation is not easy to understand. I have compiled the most interesting Wireshark Filters for me - for novice users this can become something like a reference for Wireshark filters. By the way, here in the comments you can share filters that you like - I will add them to this list.

Remember that Wireshark has display filters and capture filters. Here I consider the display filters that are entered in the main window of the program in the top field below the menu and icons of the main functions.

To fully understand the importance of filters and their meanings, it is necessary to understand how the network works.

Some filters are written here in a general form, and some are made as literal examples. Remember that in any case you can substitute your data, for example, change the port number to any one of your interest, and also do the same with the IP address, MAC address, time value, etc.

Filters can have different values, for example, it can be a string, a hexadecimal format or a number.

If an inaccurate entry is sought (better suited for non-numeric values) then contains is used. For example, to show TCP packets containing the string hackware you need the following filter:

Operators are used to find exact values. Consider them:

As you can see, there are two versions, for example, if we want to indicate that the filter value is equal to something, then we can use == or eq.

Filters using logical operands can be used to build rather complex structures, but apparently, usage of the same filter with comparison operators is buggy. For example, as here in an attempt to filter not one port, but the range of ports:

But actually the filter value (in this case, tcp.port) is overwritten by the last value, so as a result, instead of the expected behavior, we get the result of only the last part, in this case it is

Keep in mind this bug!

When using with == (equal), this bug is missing.

Logical operators allow you to create detailed filters using several conditions at once. It is recommended to use brackets additionally, because otherwise you may not get the result you expect.

Show all traffic except ARP, ICMP and DNS:

Show packets only sent or received on the wlan0 interface: 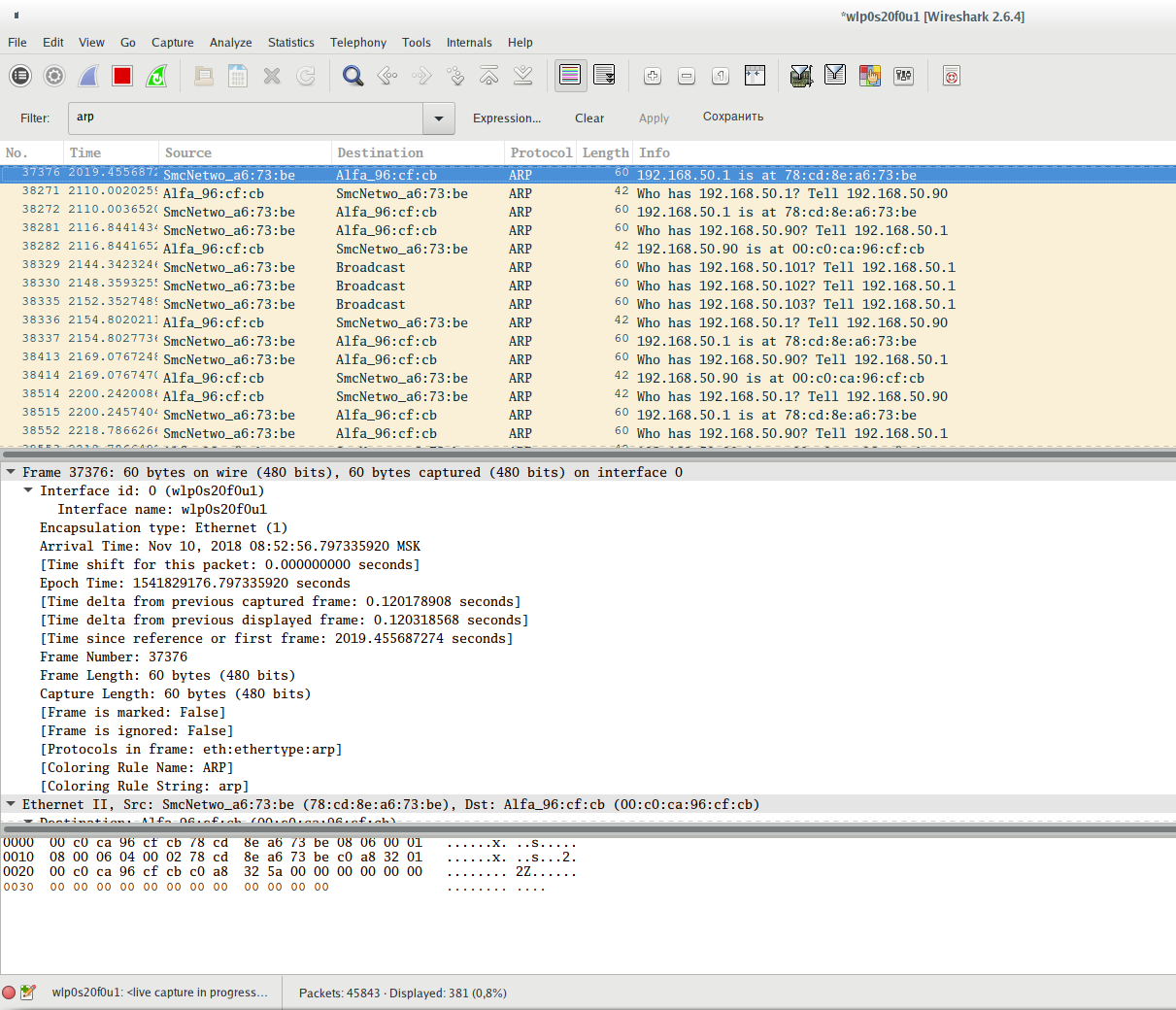 Show ARP protocol frames sent to a device with a MAC address 00:00:00:00:00:00 (this address is used when the protocol tries to find out the target MAC address. Another popular address that can confuse you is ff:ff:ff:ff:ff:ff, this is broadcast address, that is, messages with this address are for all devices on the local network):

Show frames (in general, all frames, not just ARP, as it was in the previous examples) sent from a device that has the MAC address 00:c0:ca:96:cf:cb:

Show IP traffic (this includes TCP, UDP, as well as application layer protocols DNS, HTTP - that is, almost everything except the data link layer protocols that do not use IP addresses for data transmission (in local Ethernet networks they use MAC addresses)):

Show traffic associated with a specific IP address (enter it instead of x.x.x.x). Packets will be shown in which this IP address is the source of the data OR the recipient:

Show traffic associated with these two IP addresses. According to the only possible situation, one of these addresses is the source, and the second is the destination address.

You can specify a subnet instead of a single IP address:

Filtering traffic sent from a specific IP range. If you need to filter out traffic whose source is the subnet, then use a filter of the form:

Filtering traffic destined for sending to a specific IP range. If you need to filter traffic whose destination is a subnet, then use a filter of the form:

Please note, IP protocol operates with IP addresses, but does not operate with ports. Ports are part of the TCP and UDP protocols. IP protocol is only responsible for routing traffic between nodes.

Filtering by IPv6 Address. To filter by IPv6 address, use the filter:

You can specify a subnet for filtering instead of a single IPv6 address:

If you need to filter out traffic originating from a specific IPv6 address:

If you need to filter traffic sent to a specific IPv6 address:

Filtering traffic sent from a specific IPv6 range. If you need to filter out traffic whose source is the subnet, then use a filter of the form:

Filtering traffic destined for sending to a specific IPv6 range. If you need to filter traffic whose destination is a subnet, then use a filter of the form:

Filtering ICMPv6 (Internet Control Message Protocol of the sixth version) in Wireshark is done by the filter:

How to filter ARP packets for IPv6 in Wireshark? For IPv6, ARP is not required, since its role is played by the Neighbor Discovery Protocol (NDP) using ICPM6.

To see packets that act as ARP for IPv6, use a filter:

Other filters with an IP address are similar for IPv6 and IPv4.

To see only TCP traffic:

Show traffic whose source or destination port is a specific port, for example, 8080:

Show the traffic that is sent to the service listening on port 80:

Show TCP packets with the SYN flag enabled and the ACK flag disabled:

Similarly for other flags:

You can also use syntax like tcp.flags == 0x0XX, for example:

To show packages containing any string, for example, the hackware string: 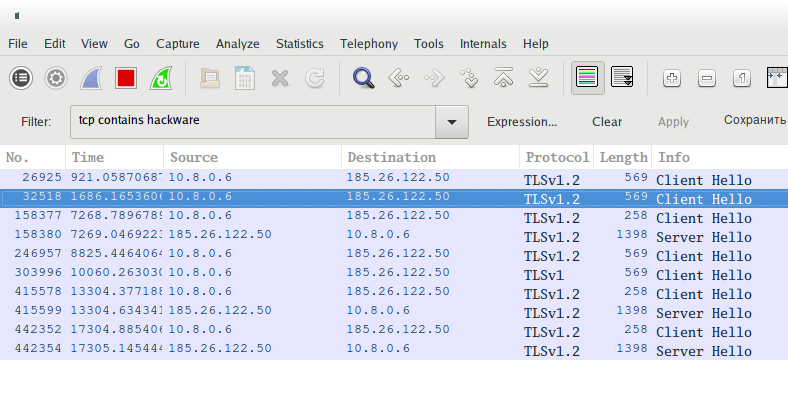 This filter displays problematic packets (lost segments, transmiting, etc.) TCP Keep-Alive packets pass this filter, but they are not an indication of problems.

Filters to assess the quality of a network connection.

The following specifications apply to TCP frames. Moreover, they are not based on frame headers – the considered characteristics (data omission, duplicates) are assigned by the Wireshark program based on the analysis.

The filter displays information about frames with the ACK flag, which are duplicates. A large number of such frames may be a sign of communication problems:

Show frames for which the previous segment is not captured:

This is normal at the beginning of data capture – because the information is not intercepted from the very beginning of the session.

To display frames that are retransmission (resend):

Show frames that are not received in the correct order:

To see only UDP traffic:

Flags are not used for UDP. For this protocol, you can only specify the port.

Show the traffic that is sent to the service listening on port 53:

A UDP packet containing a specific string, for example, a hackware string:

To see only ICMP traffic:

Show all answers to ping: 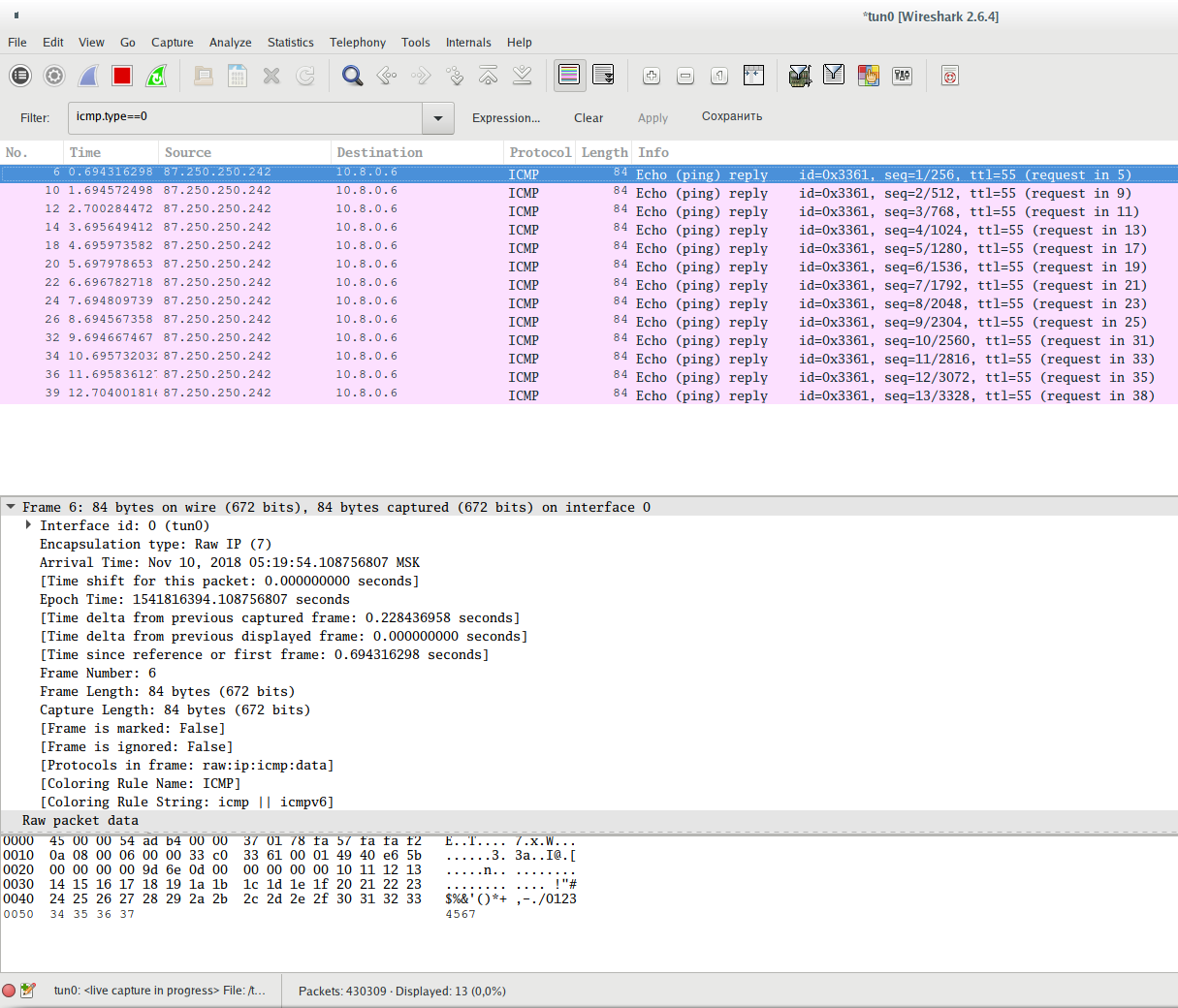 An example of using the CODE value, the following filter will show messages about the port unreachable:

For the application protocols of HTTP, DNS, SSH, FTP, SMTP, RDP, SNMP, RTSP, GQUIC, CDP, LLMNR, SSDP there are filters that are called like the protocols themselves, but are written in small letters.

For example, to see HTTP traffic:

To see the traffic of the new HTTP/2 protocol:

Remember that when deciding which protocol the transmitted data belongs to, the program considers the used port number. If a non-standard port is used, the program will not be able to find the necessary data. For example, if you connect to SSH on port 1234, the ssh filter will not find SSH traffic.

A filter that shows only the data sent by the POST method:

A filter that shows only the data transmitted by the GET method:

Search for requests to a specific site (host):

Search requests to a specific site by part of the name:

Filter for outputting HTTP requests in which cookies were transmitted:

Requests in which the server has set cookies in the user's browser.

To search for any transferred images:

To search for certain types of images:

To search for files of a specific type:

Search for requests for files of a certain type. For example, to search for transferred ZIP archives:

You can also filter requests that contain a specific HTTP REFERRER header value. For example, to search for queries in which the referrer is ru-board.com:

Search requests with any authorization. Similarly, with the help of contains you can search for certain types of authorization:

Search for files in the HTTP stream:

To see which HTTP data is delayed, use the following construct:

It will show traffic received after 1 second.

To investigate problems, you can analyze the status of HTTP response codes. For example, the following filter will show traffic for which a 404 Not Found error was received (page not found):

The following filter is very interesting. Firstly, it shows which complex structures can be built from separate filters. Secondly, it allows you to explore HTTP requests and overall web activity, eliminating unnecessary data. With this filter you can view high level web activity. The rules inside the brackets exclude images, JavaScript files and style sheets — everything embeded the page requests within itself. If the examined pages contain other embedded objects, exclude them in a similar way:

To see all DNS queries and answers:

To see which DNS queries took a lot of time:

The answers that came more than a second after sending the request will be shown.

This filter shows which dns requests cannot be correctly resolved:

Show requests and responses in which the IP for google.com is searched:

Show DNS requests and responses for A record:

Show requests with a length of more than 25:

Show DNS server responses for which recursion is available:

Show DNS server responses for which recursion is not available:

Is recursion desirable (if the requested DNS server does not have host name information, should it query other DNS servers for this information):

Whether to accept unauthenticated data (0 means do not accept, 1 means accept):

To see how IP addresses are assigned by DHCP:

SMB filter. This filter in the Info column shows the entire tree (ball) of connections, open directories and open files in the trace.

Show all at once: EAPOL, beacons, Probe Response:

Show wireless frames for a specific device with the BSSID MAC address:

Show only the first message of the handshake:

Show frames for access points with a speed (Data Rate) of 1 Mb/s:

Show frames for access points at speeds above 10 Mb/s:

Filters associated with the presence of an antenna on a device: