How to intercept and analyze traffic in open Wi-Fi

Is it dangerous to use open Wi-Fi networks

Internet access via Wi-Fi is currently very popular. There are Wi-Fi hot-stops in apartments, in workplace. When using wireless access, it is important to maintain the security of your Access Point. Nowadays, public Wi-Fi networks are very popular as well. They are in restaurants, gyms, in shopping malls, in the subway, in hotels, in private hospitals and clinics, in apartments and condos - they can be found almost everywhere where quite a lot of people gather.

These networks have a feature - often they are open Wi-Fi networks for connecting to which no password is required. Are there any additional security rules for working with such networks?

Yes, when using an open Wi-Fi network, you need to be aware that:

But open access points do not encrypt traffic. This means that if you use an open access point and visit a website that runs on the HTTP protocol, then your data is transmitted in the clear form and anyone near you can capture and save it. If you open a site on the HTTPS protocol, then this data is encrypted, however, you can still see exactly which sites you opened (although ones don’t see which pages you visited, which comments you left).

So: you need to remember that open wireless networks are subject to interception of information.

Next, I will show an example of data interception, from which it will become clearer what exactly an attacker can see.

For a successful attack, you need a computer on Linux (for example, with Kali Linux or with BlackArch), as well as a Wi-Fi card from this list.

Let's start by looking at the names of the wireless interfaces: 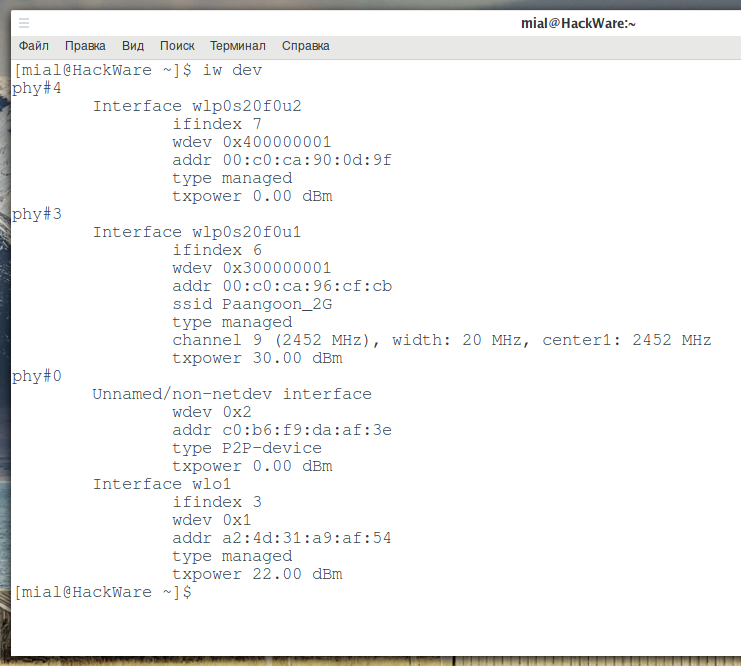 As you can see, I have several wireless interfaces, I will use wlp0s20f0u2.

In previous commands, instead of INTERFACE, you need to enter the name that the wireless interface has on your system. For example, for the wlp0s20f0u2 commands look like this:

My interface is called wlp0s20f0u2, so I run the following command:

An example of the obtained data: 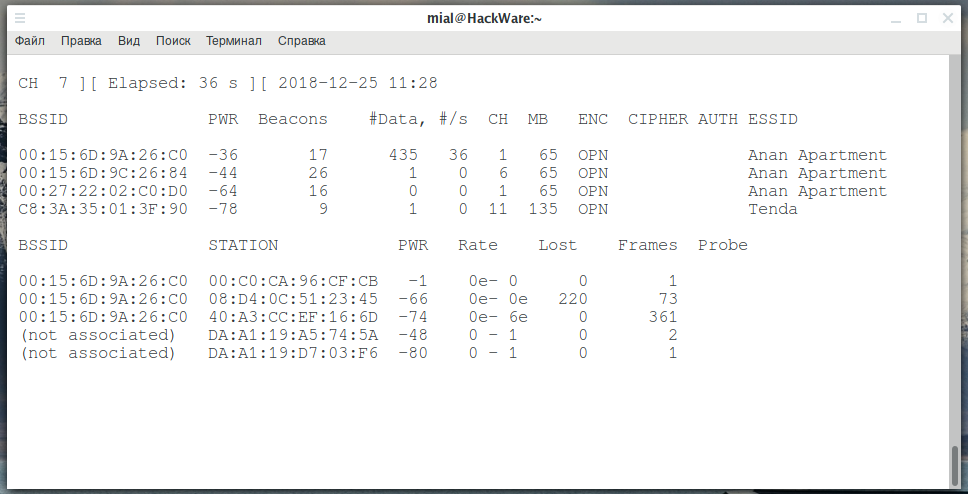 As you can see, there are several open Access Points at once. You can choose any of them to intercept data, but you need to remember that: for successful data analysis, it is important to capture the transmitted data from both the AP and the Clients. That is, I can choose to capture data from a remote TD and, probably, I will capture most of its wireless frames, but the fact is that Clients usually have less powerful wireless transmitters. Clients can also be located further away from me than the Access Point itself. For this reason, it is better to choose the closest AP. The higher the PWR value, the better the signal (just in case I remind you: negative numbers are closer to zero, the more they are). For example, in my situation, I choose the AP with a -35 signal.

Directional antennas can significantly improve the quality of a wireless connection if directed in the right direction. As for data capture, it is better not to use a directional antenna, as AP may be in one direction, and its Clients - in others. It is advisable to use a large external antenna.

It doesn't matter if the AP is a hot spot with authorization on the web interface (Captive Portal) or simply open Access Point - the described interception method works the same for any of these options.

To capture data, run airodump-ng again, but with a command like this:

For example, I want to listen to the AP that works on the first channel, for this I want to use the wlp0s20f0u2 wireless interface and save the captured information to a file that starts with openap, then my command is as follows: 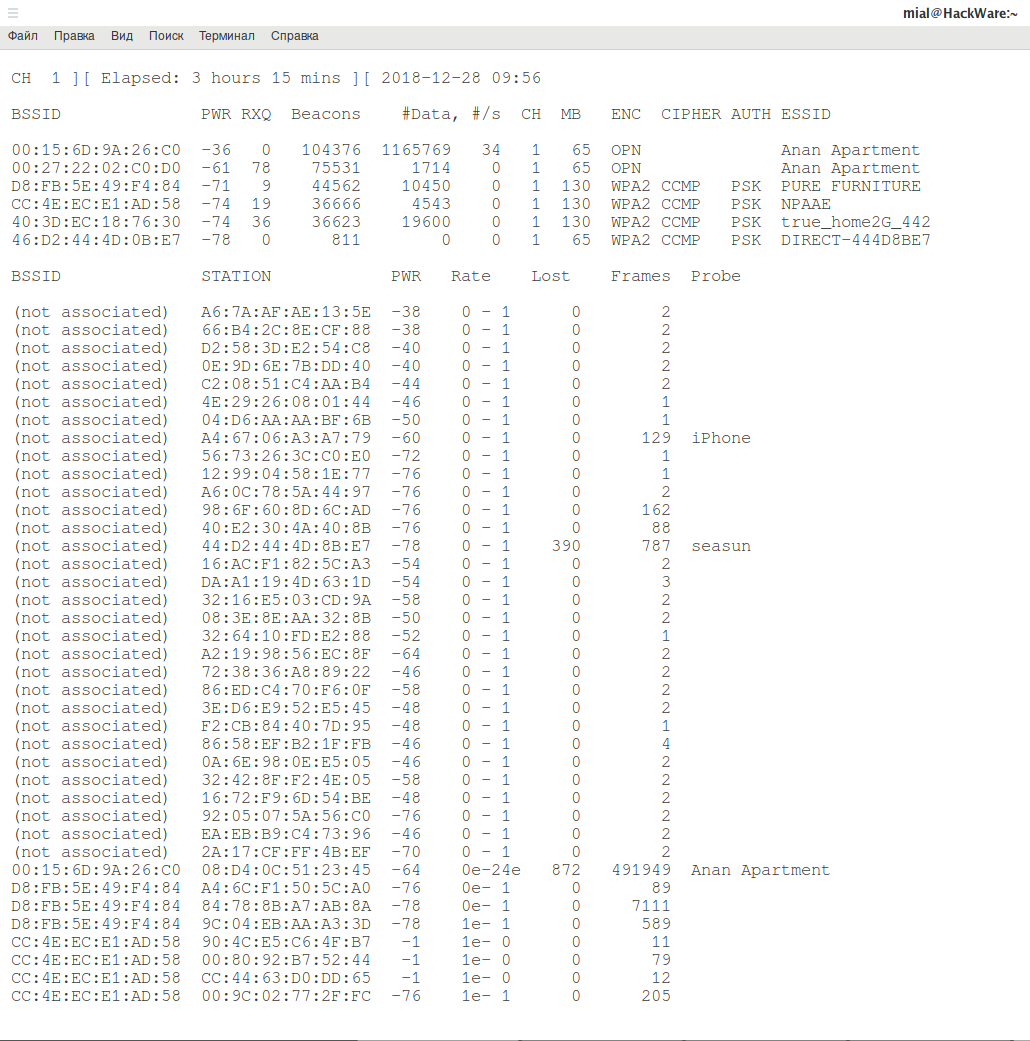 Next, wait for enough data to be collected. You can analyze the data during the process of capturing - without stopping airodump-ng.

As a result of airodump-ng running, a file with the .cap extension will be created, for example, openap-01.cap.

To analyze the data, you can use different programs, I will show the analysis of wireless traffic with Wireshark.

Open the file with the captured data in Wireshark.

To extract different data, we will need Wireshark filters. Here I will show an example of using only some filters, it is recommended to study a large selection of useful Wireshark filters here.

To assess the quality of capture, you can start with filters that display the results of the TCP protocol analysis. 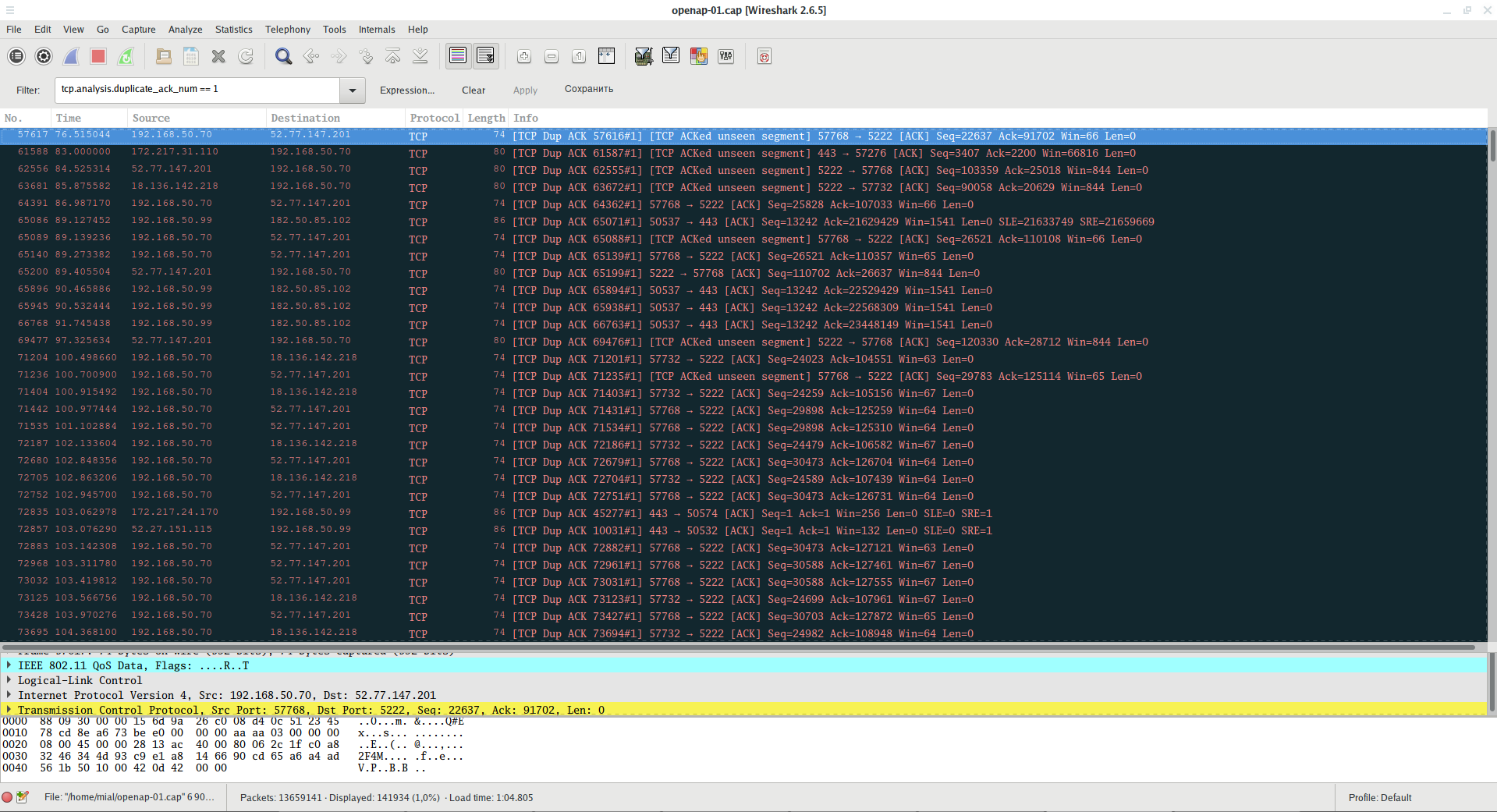 This filter displays information about frames with the ACK flag, which are duplicates. A large number of such frames may indicate communication problems between the Client and the Access Point.

Filter showing frames for which the previous segment is not captured: 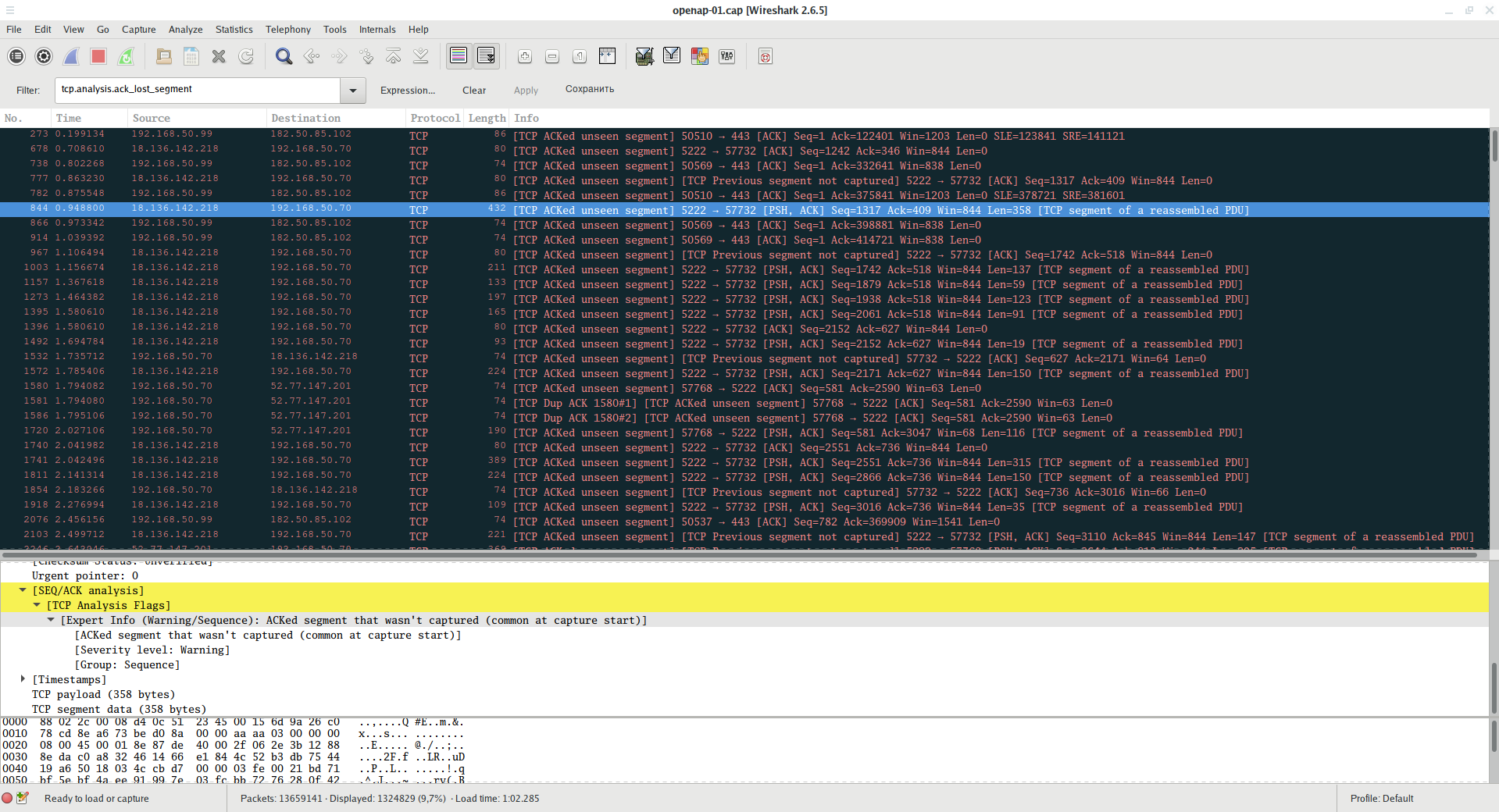 This is normal at the beginning of data capture - because the information is not intercepted from the beginning. But if this error often occurs later, then you are too far from the Access Point or Clients and you do not capture some of the data that they transmit.

To display frames that are retransmission (resend): 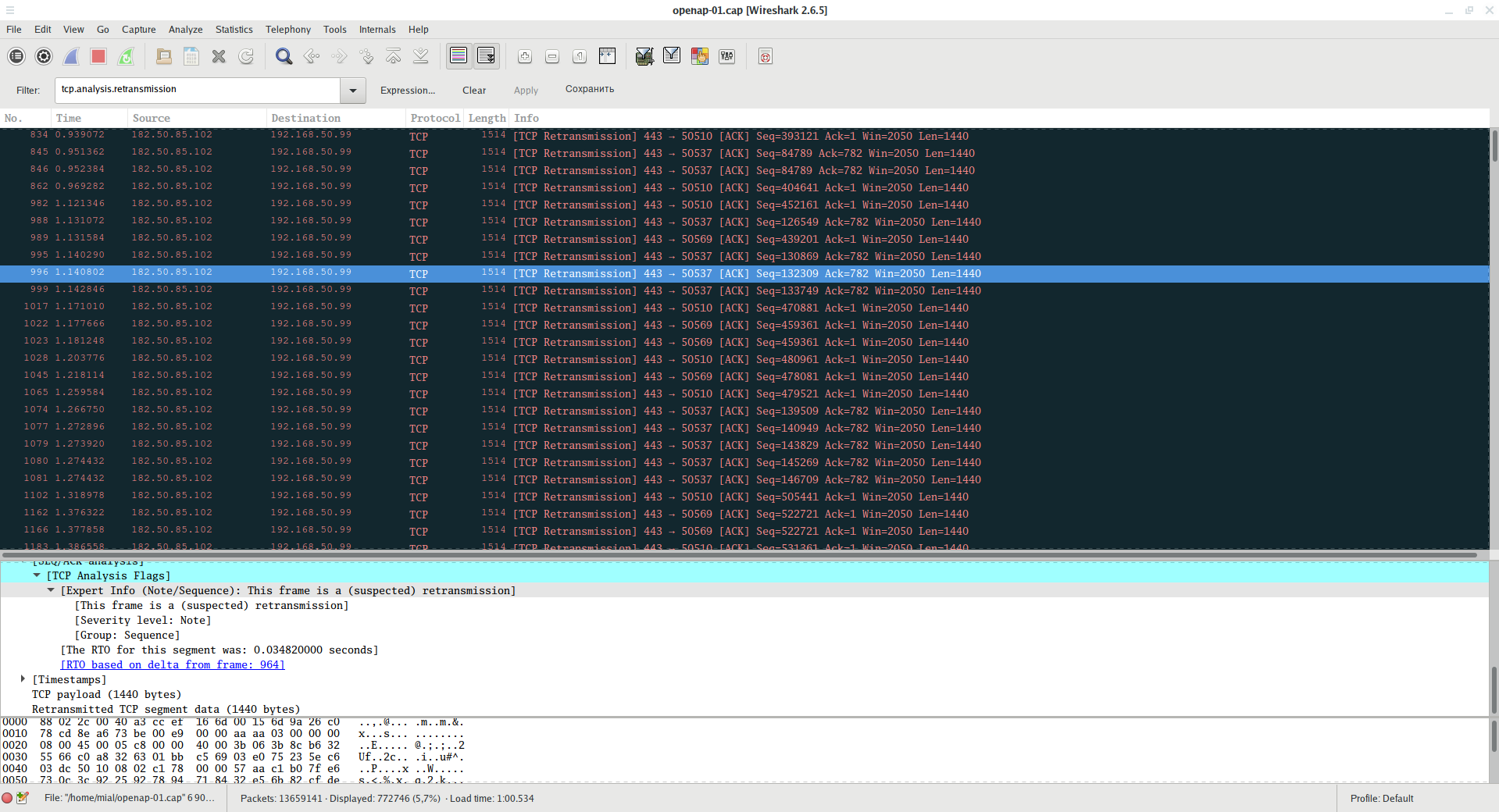 A large number of such frames may indicate that there is a poor connection between the Client and the AP and they often have to send the same data again. 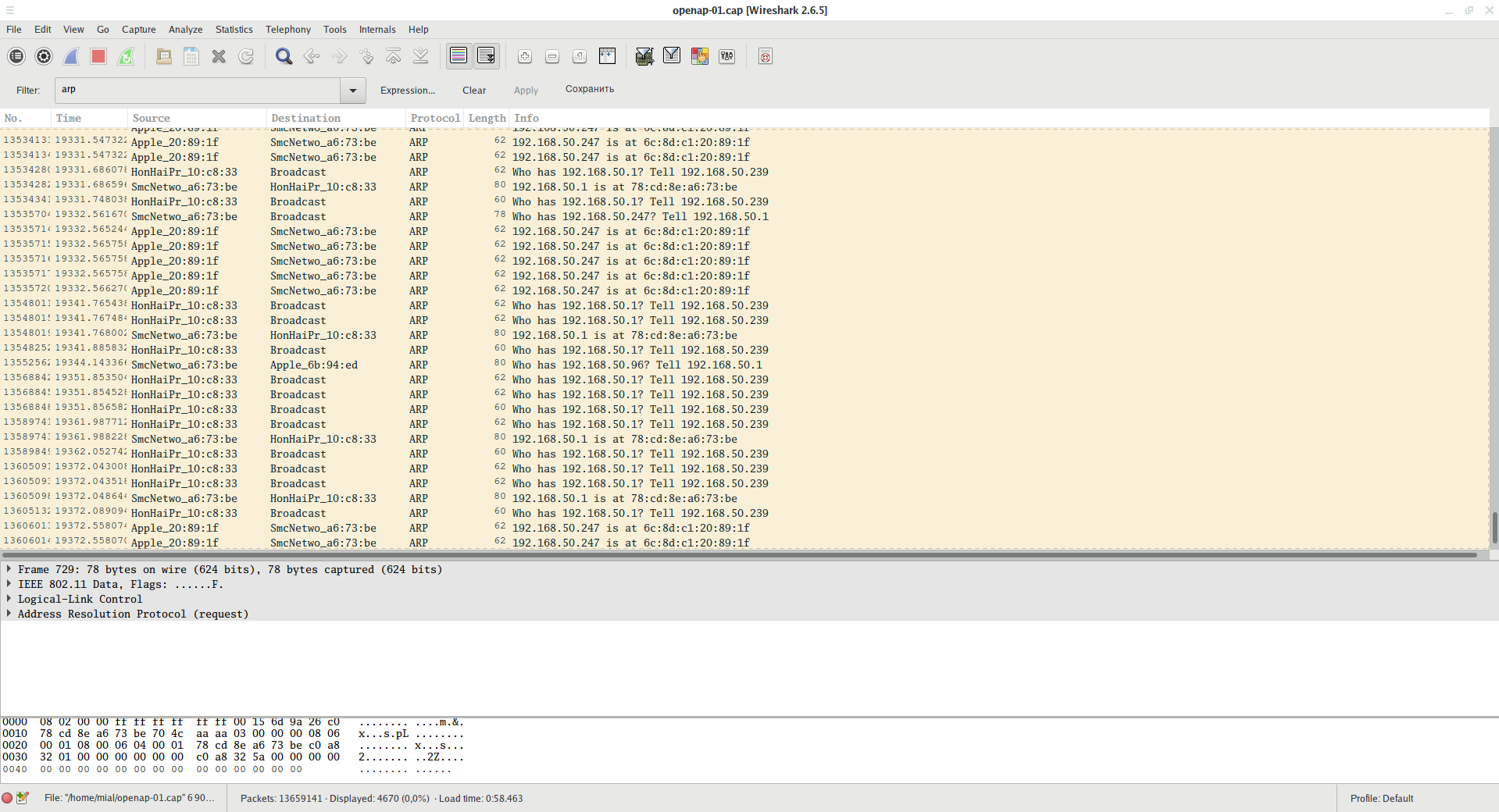 You can see the ARP traffic - with its help, it is convenient to analyze how many devices are currently connected to the local network, what IP addresses they have and what MAC addresses. Knowing the MAC address of the device, you can find out its manufacturer.

you can see all sent DNS requests. 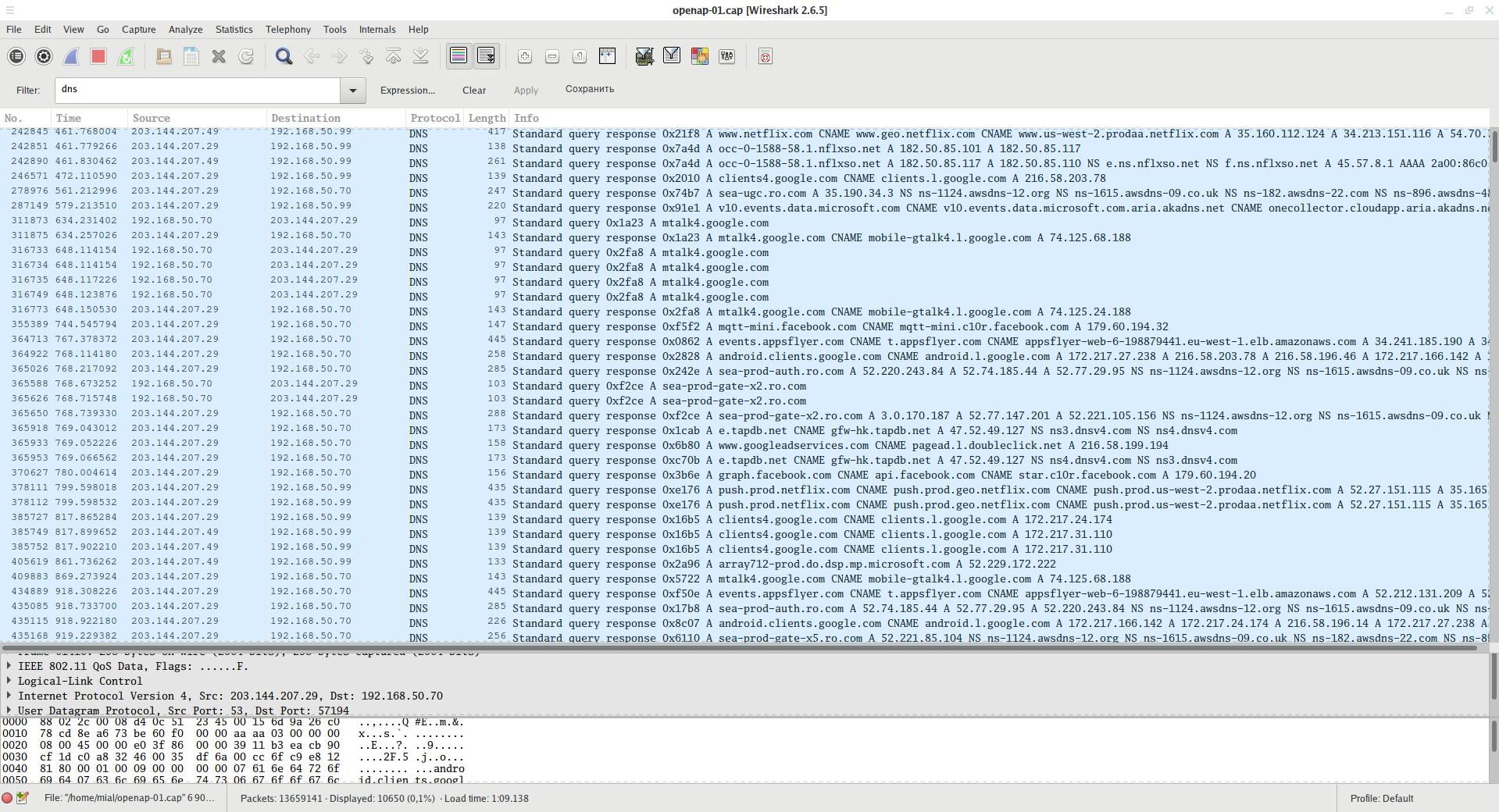 Thanks to these requests, you can find out which sites users have visited (even if these sites use HTTPS!), As well as which online services have been made to requests.

For example, in the screenshot you can see the addresses of the online cinema Netflix, Facebook, various Google services.

Here you can find a lot of interesting information. For example, you can see requests for services and data transmitted, including API keys, device identifiers, and so on: 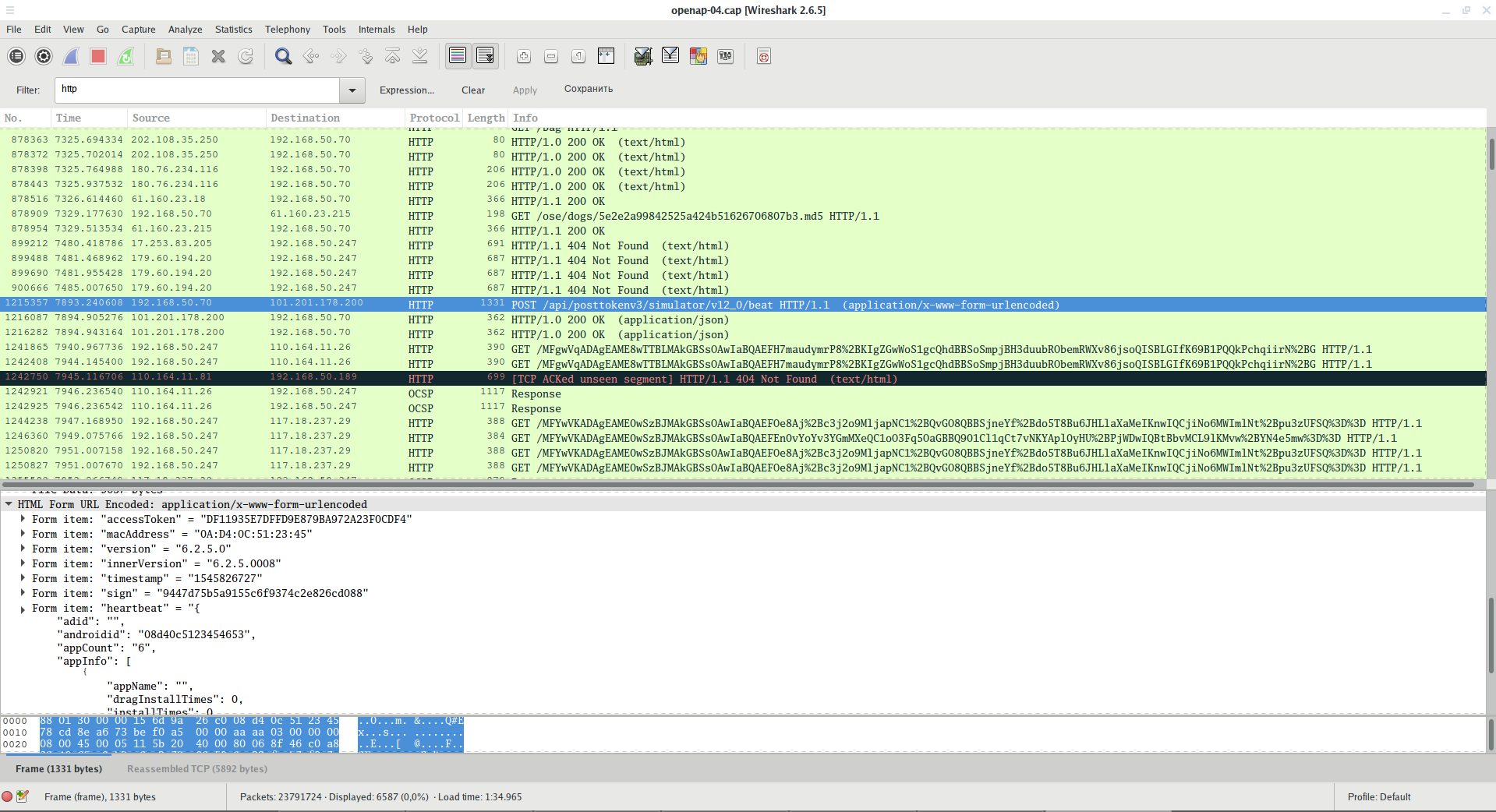 You can see the visited URL address with all the parameters passed: 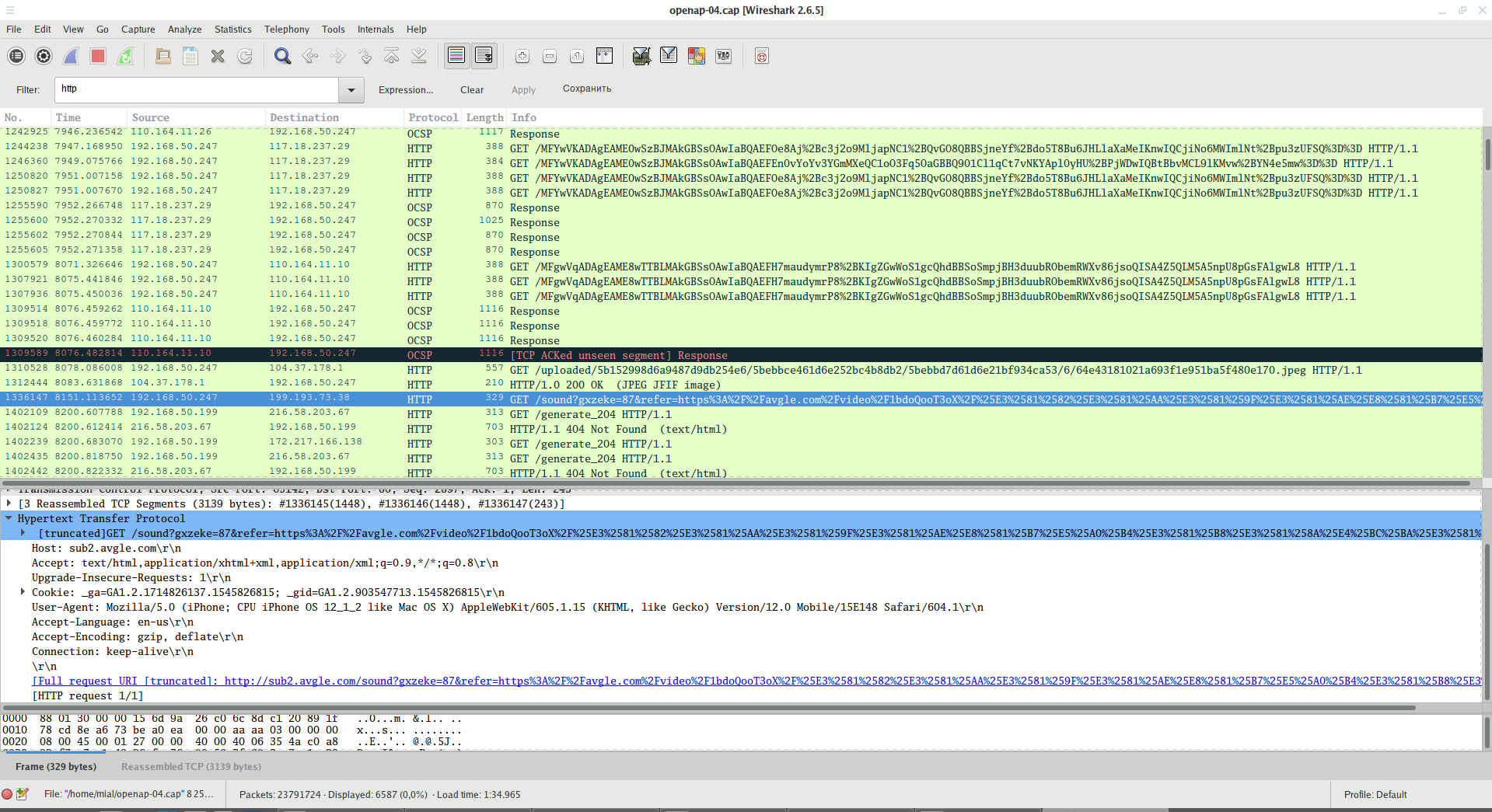 The authorization information used when sending data is visible: 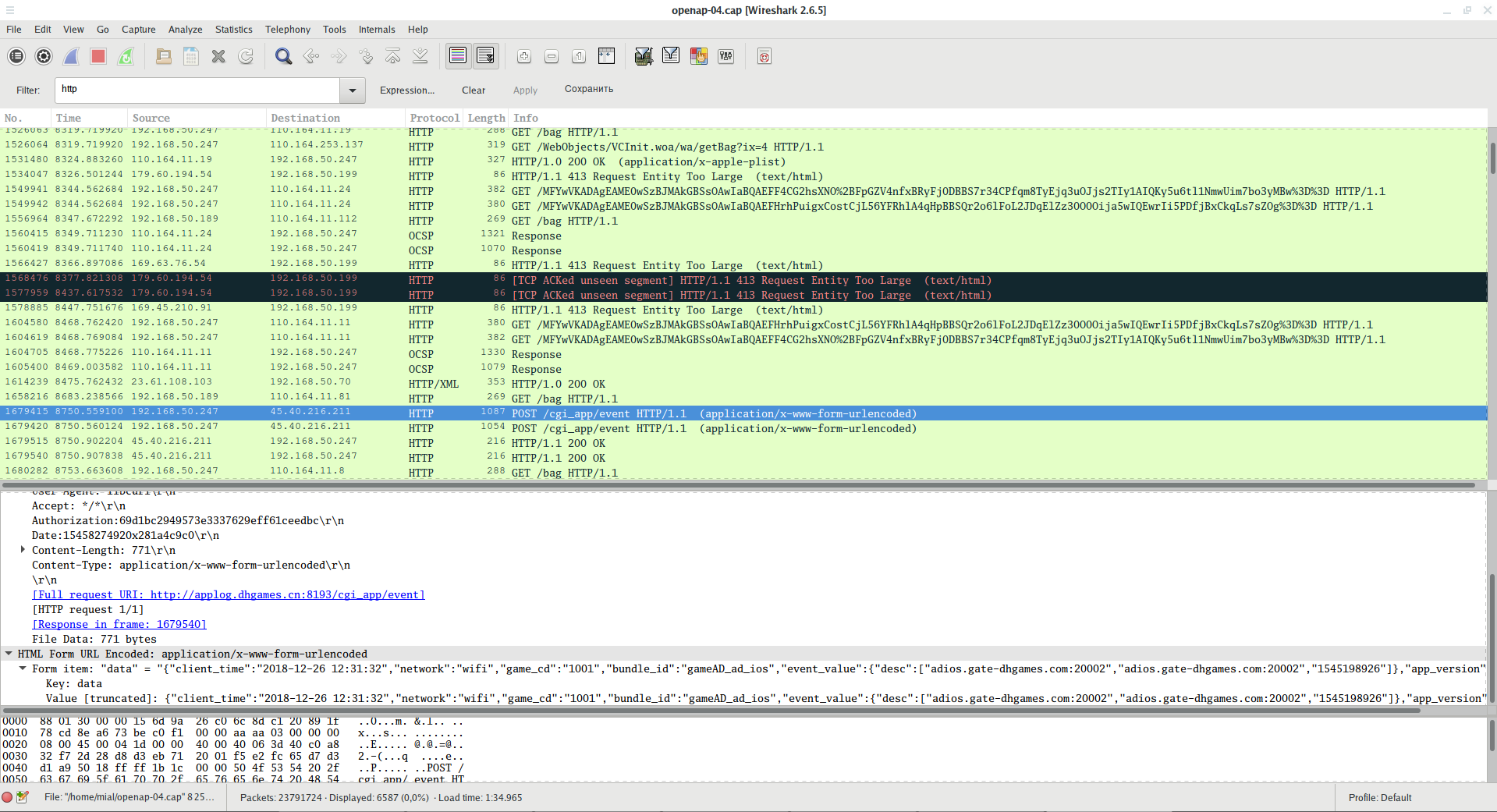 You can see the files uploaded and opened on the Internet: 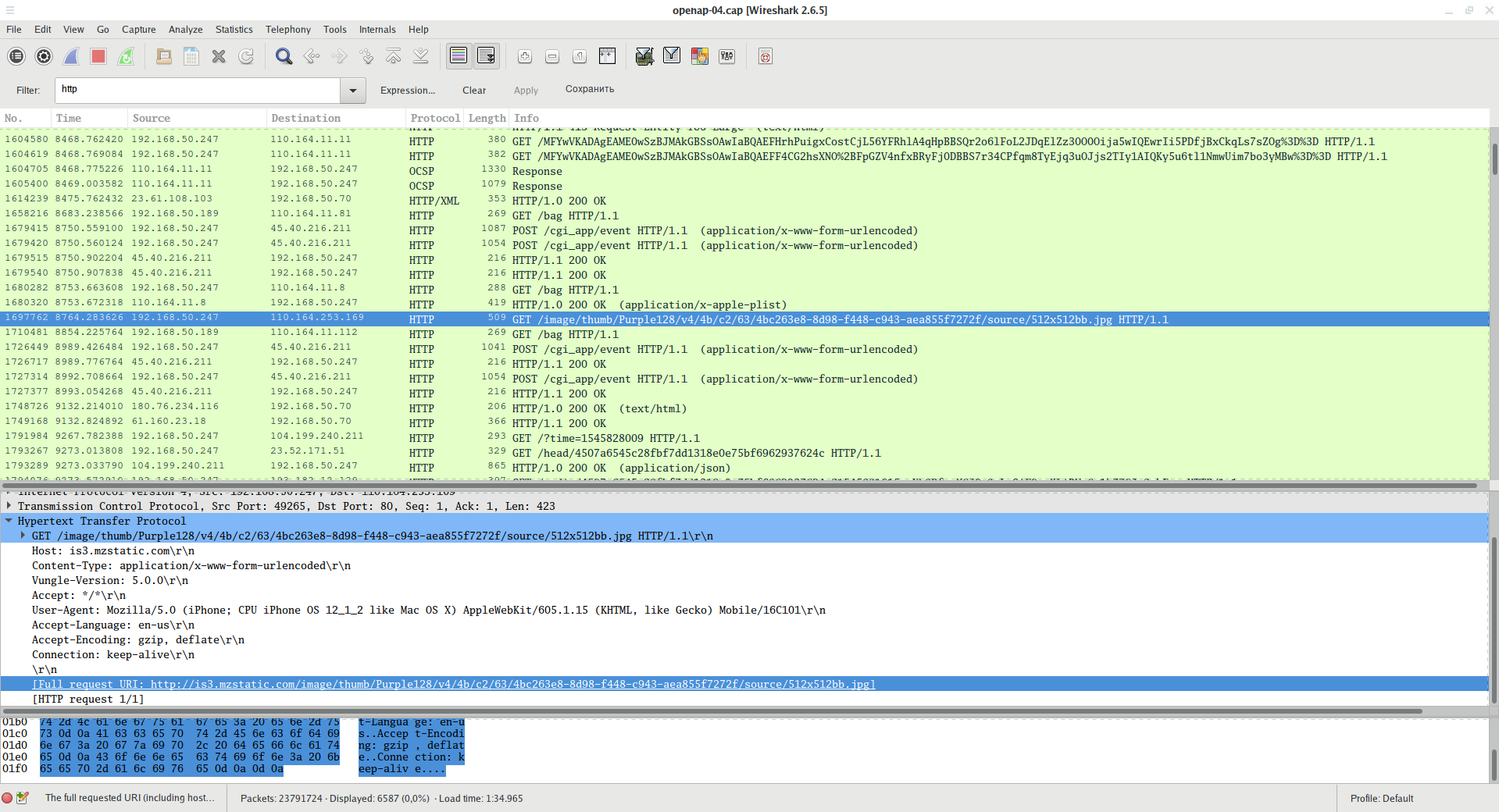 You can save any transferred file. To do this, use the mouse to select the package that contains it (1), then in the middle pane, which contains detailed information, scroll to the bottom to find the data field and right-click on it to bring up the context menu (2), context menu, select Export Selected Packet Bytes (3): 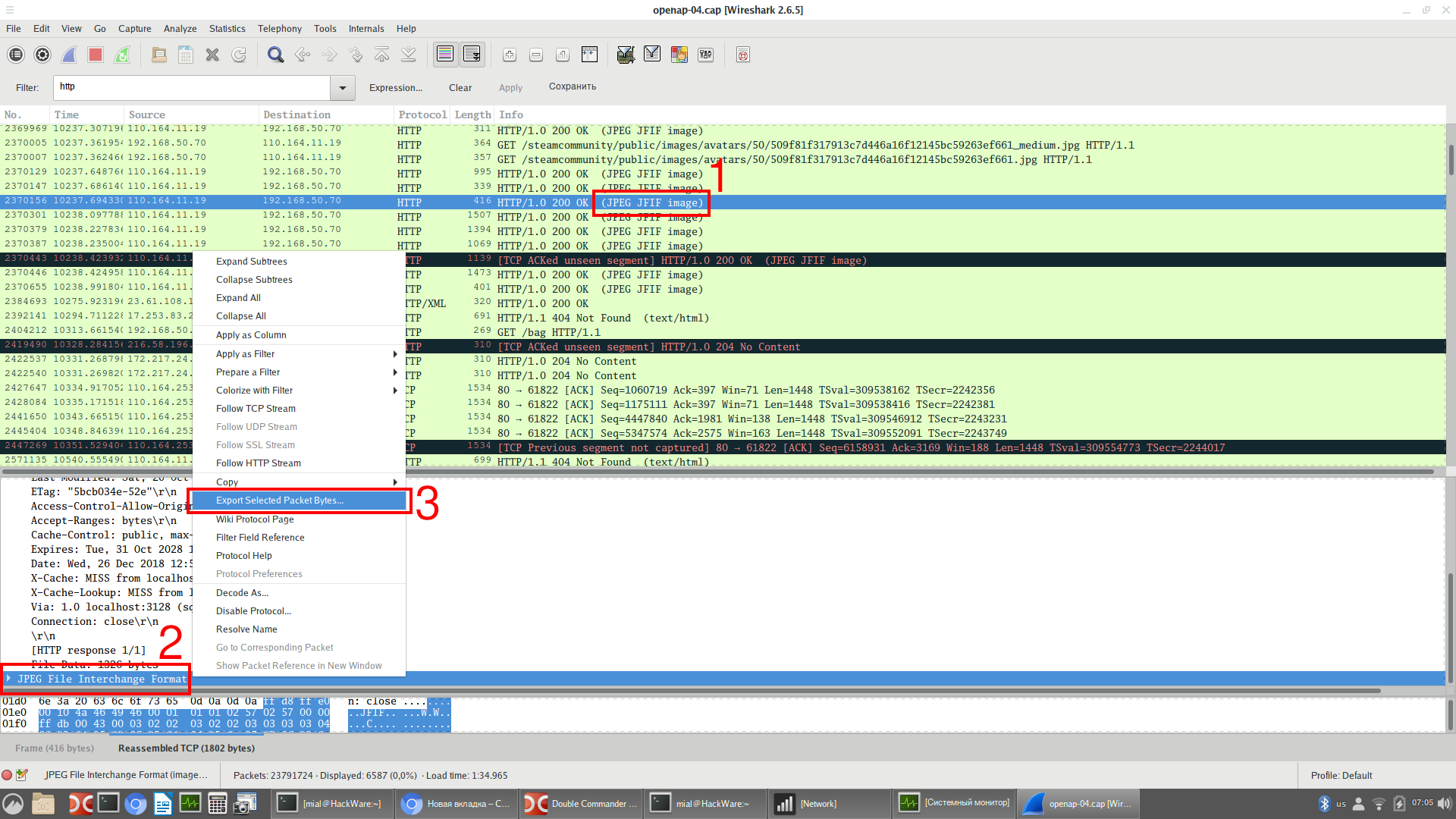 Enter a file name, select a location and save it. 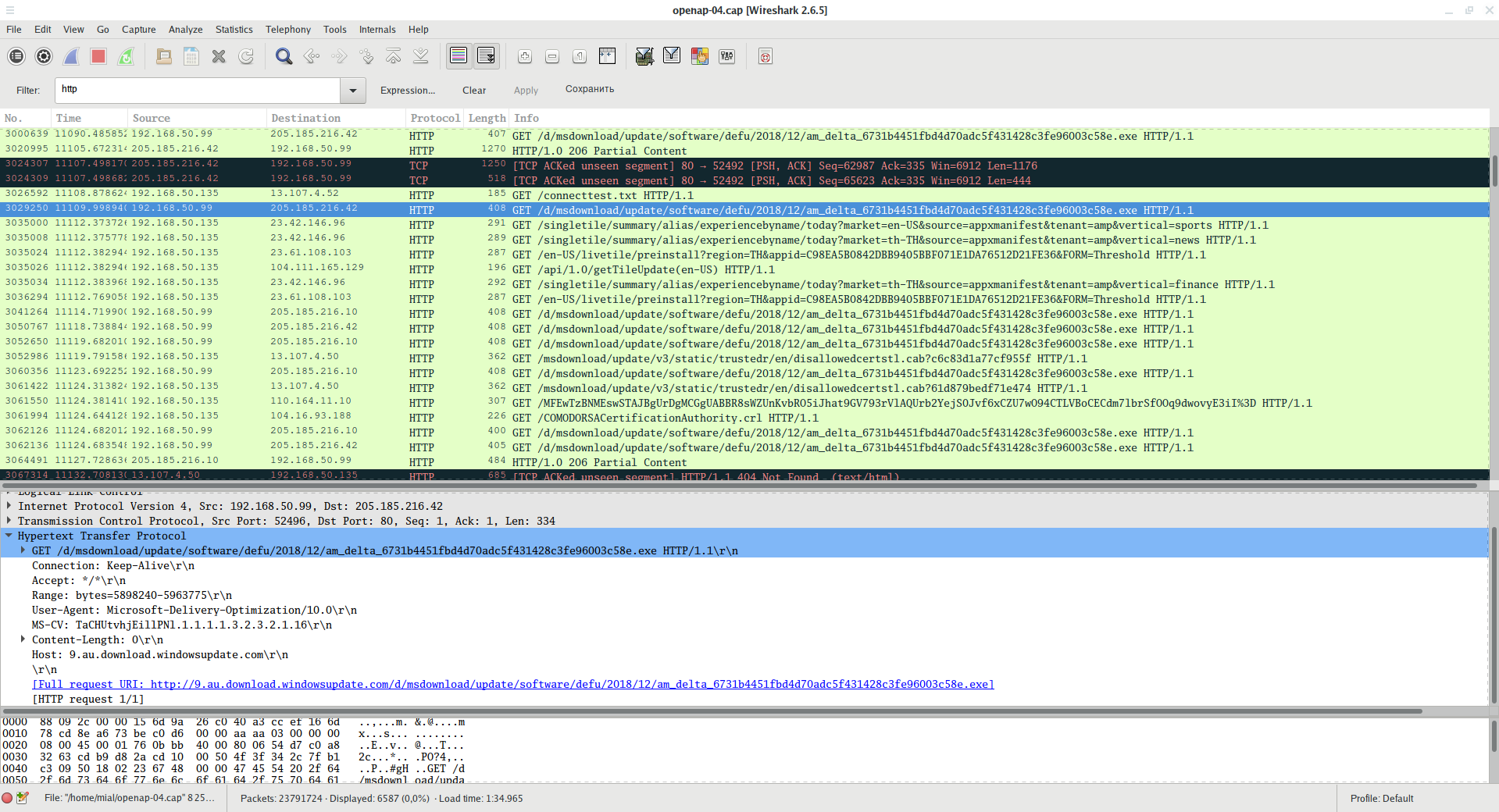 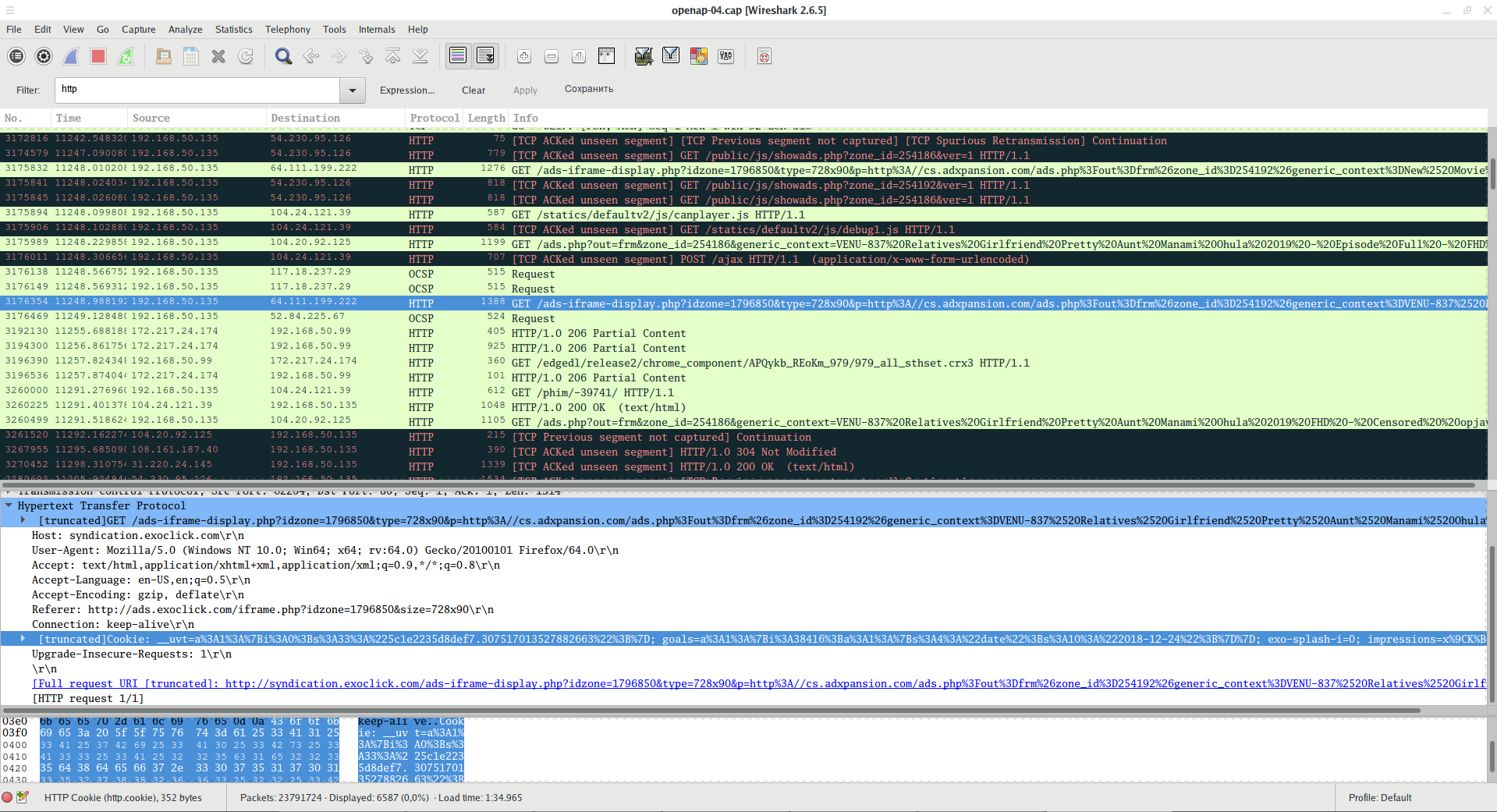 you can see HTTP requests in which cookies were transmitted.

And using the filter

you can see the requests in which the server has set cookies in the user's browser. 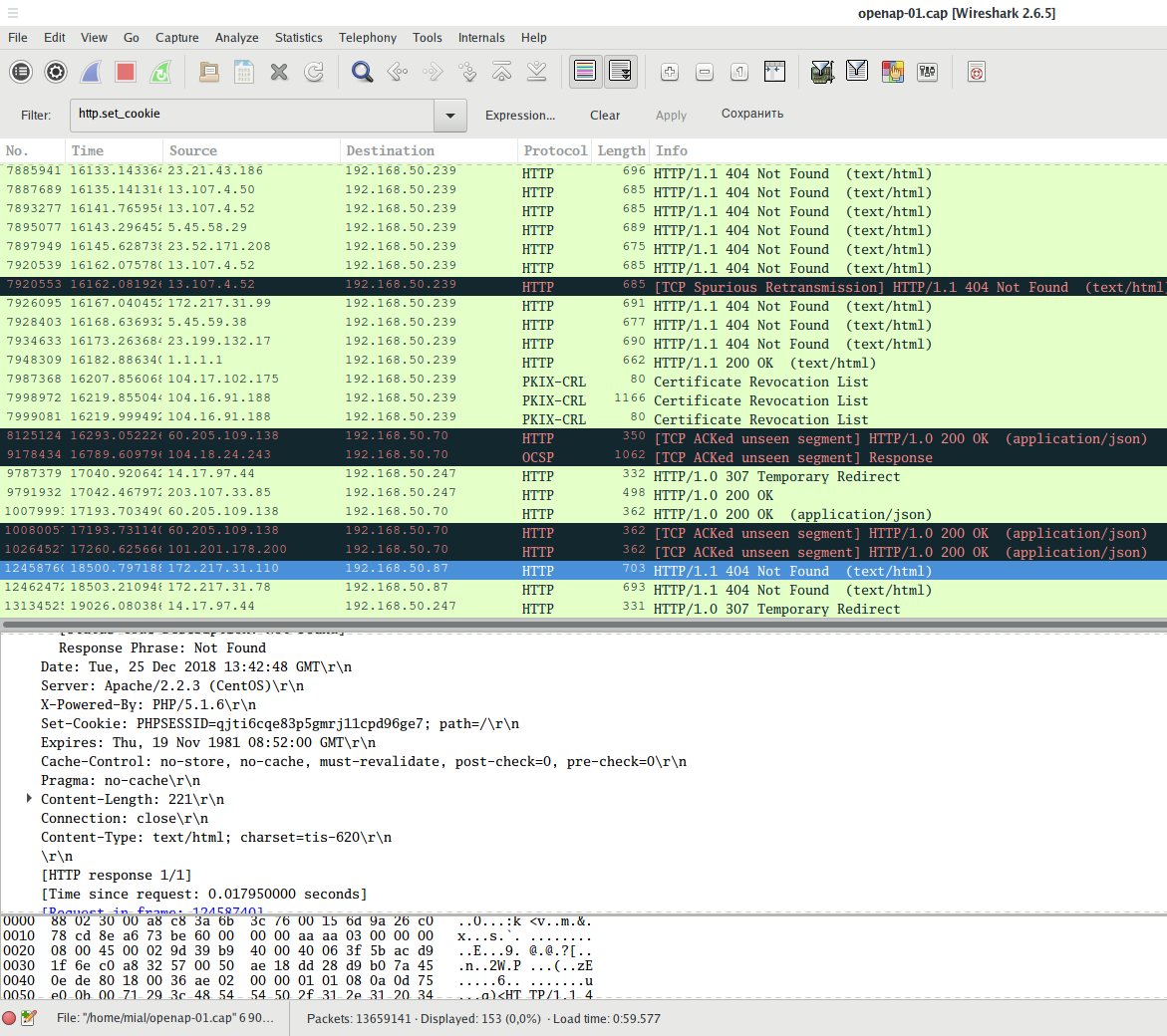 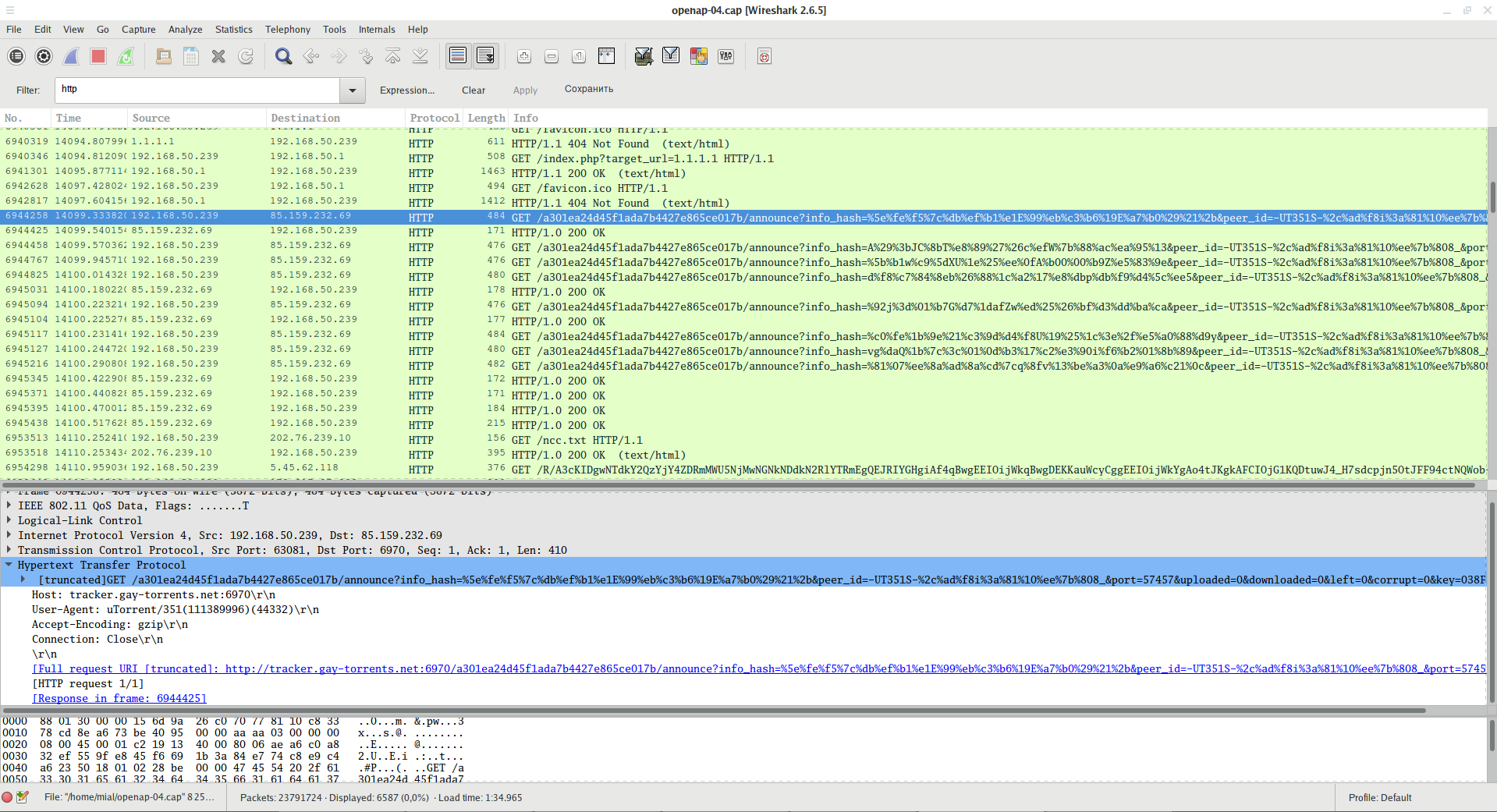 The data sent by the POST method is also visible: 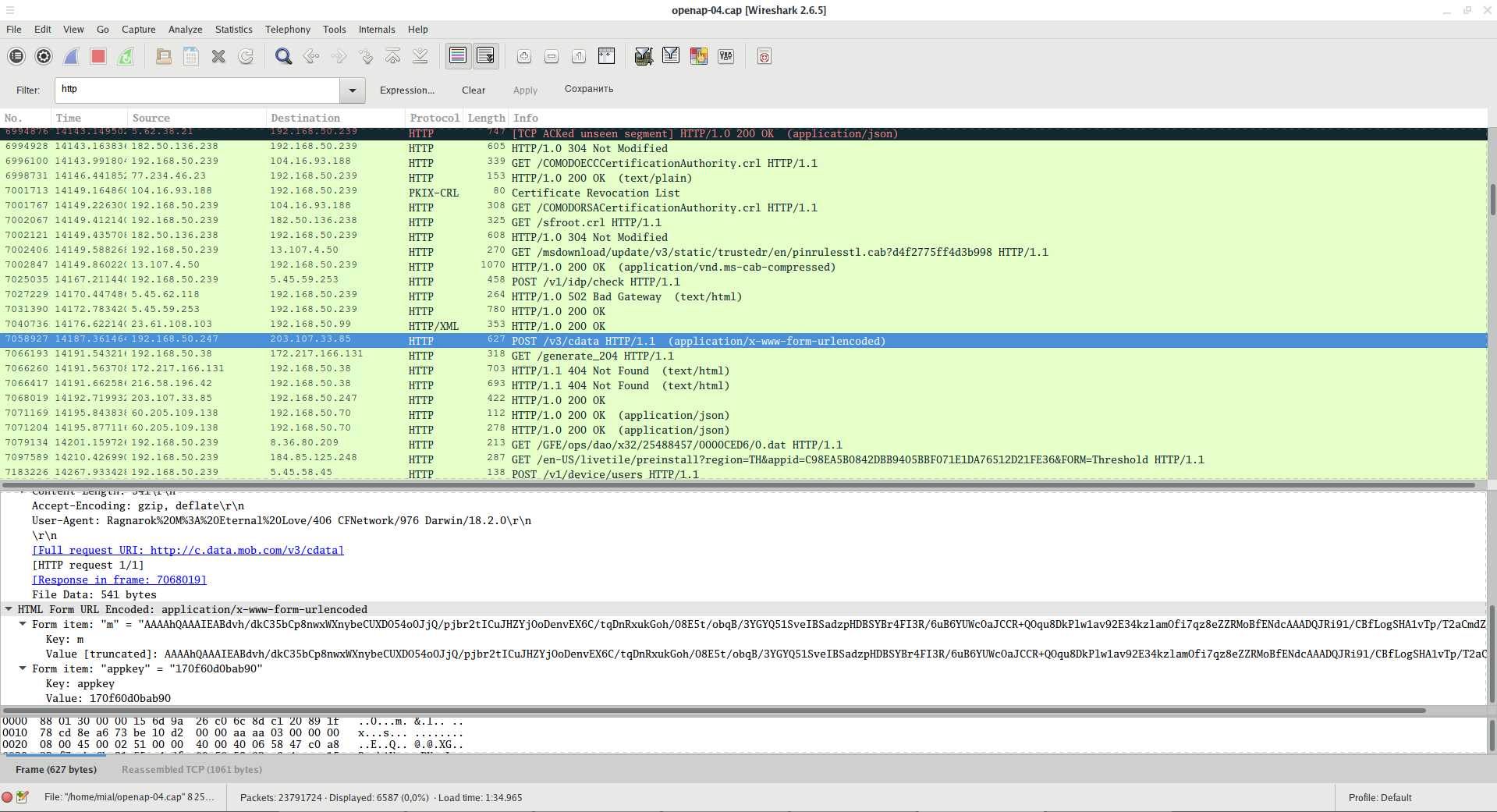 To search for any transferred images: 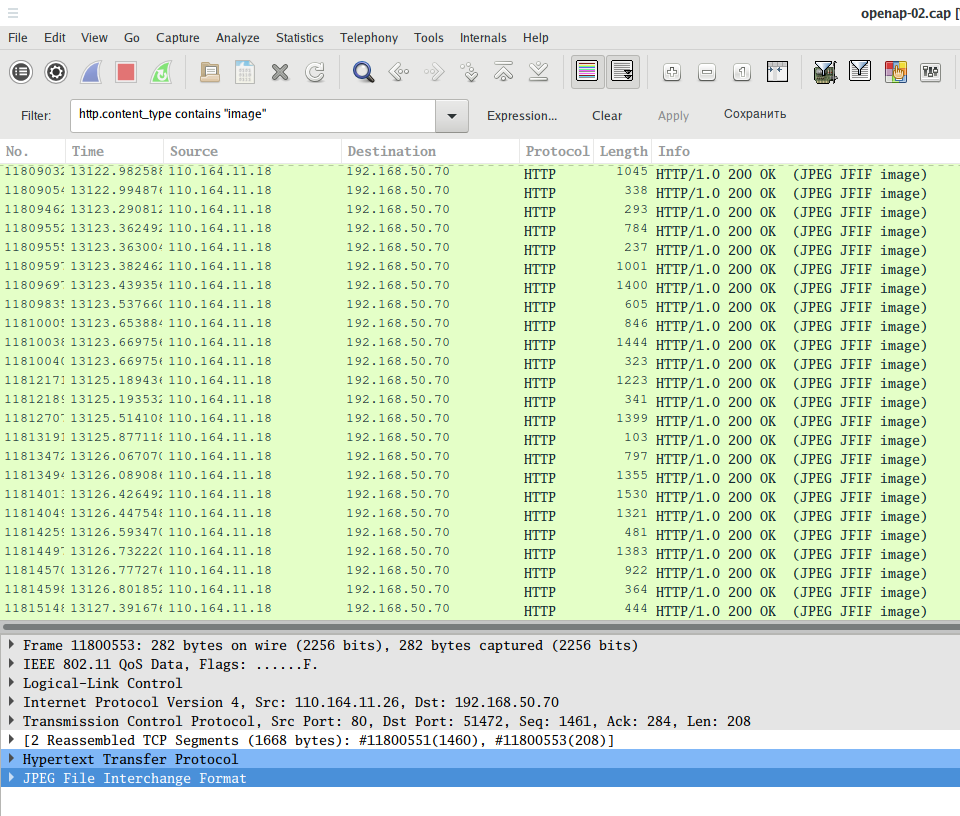 To search for certain types of images:

To search for files of a specific type:

Wireshark filters to extract files of a certain type. For example, to search for transferred ZIP archives: 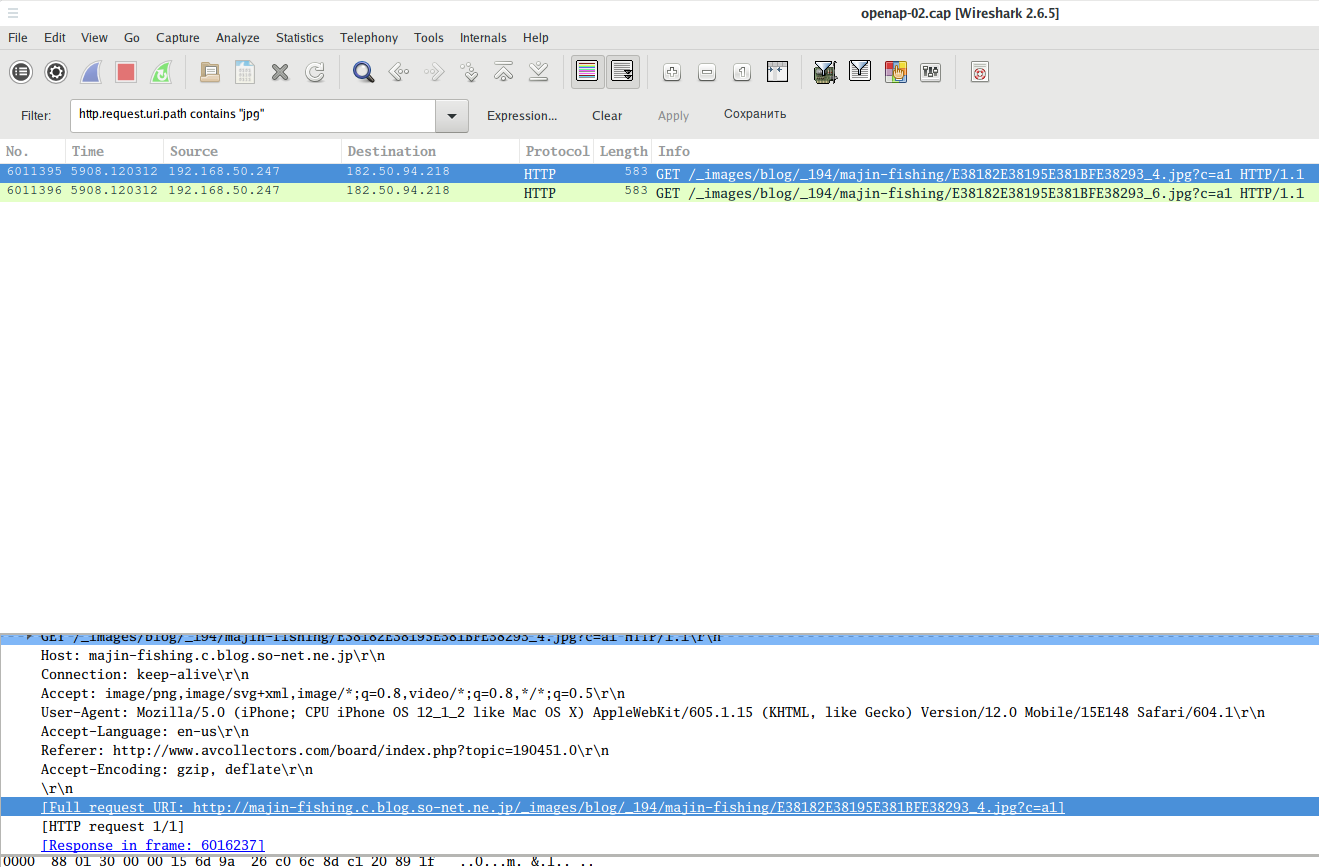 A filter that shows only the data sent by the POST method: 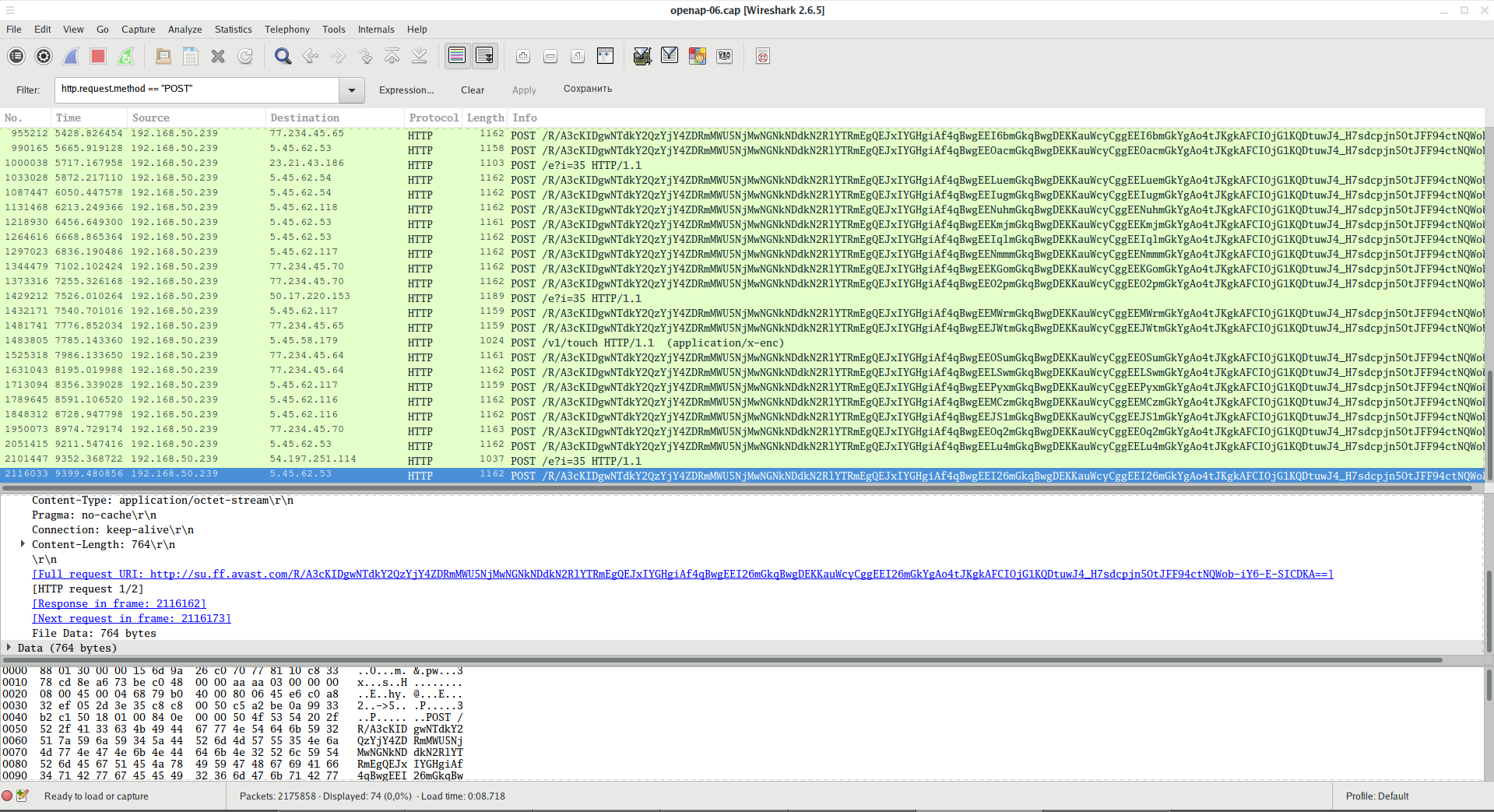 A filter that shows only the data transmitted by the GET method:

Search for requests to a specific site (host):

Search requests to a specific site by part of the name:

Now the number of applications and sites that do not use encryption is rapidly decreasing. Therefore, the danger of such interception decreases every year. Nevertheless, it still exists.

Even websites that use HTTPS can inadvertently give out data. For example: 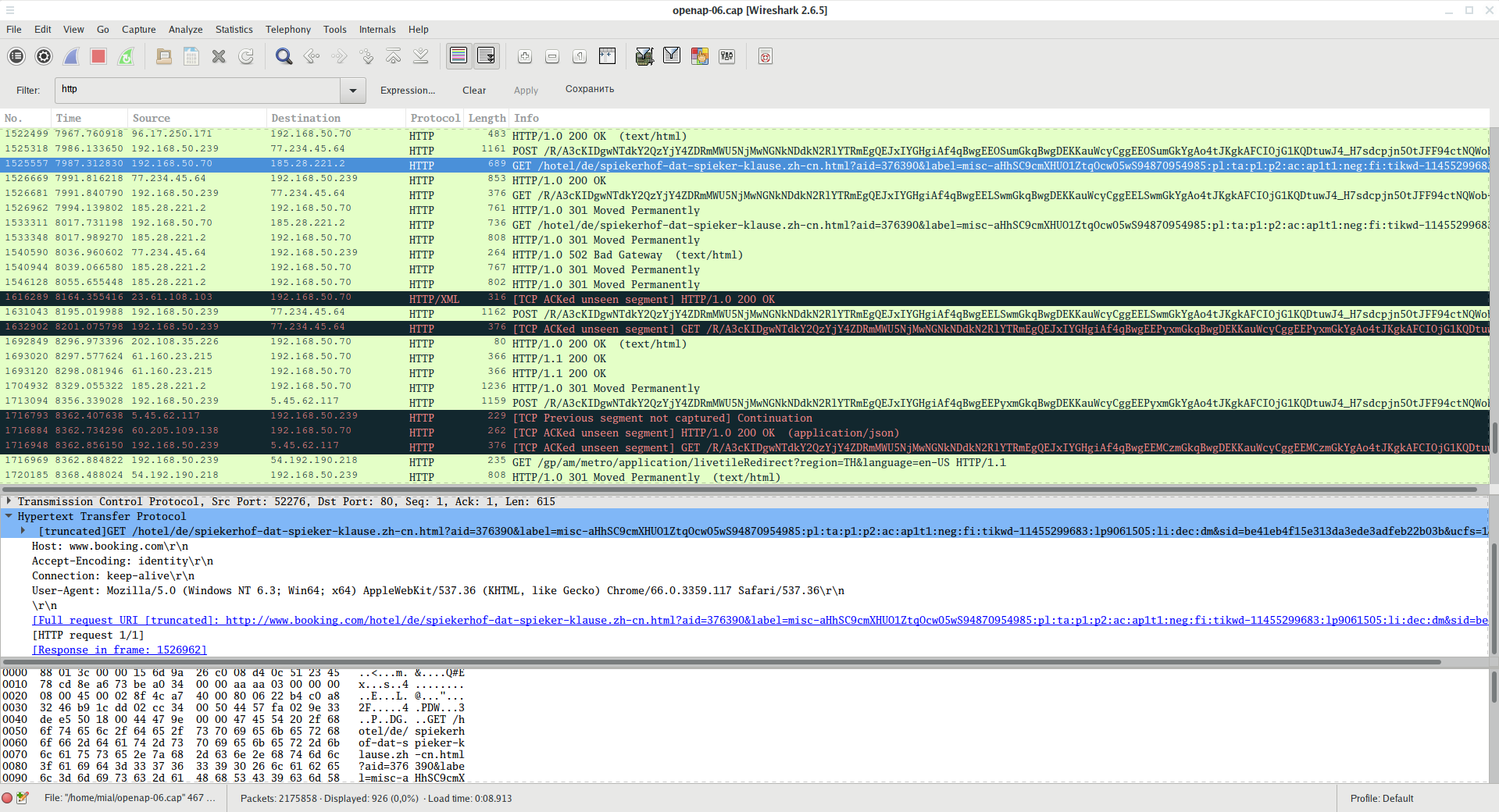 It can be seen that the data on booking.com is transmitted from the user in an unencrypted form, so you can intercept this link.

The iPhone application constantly downloads some (audio?) files without using a secure connection: 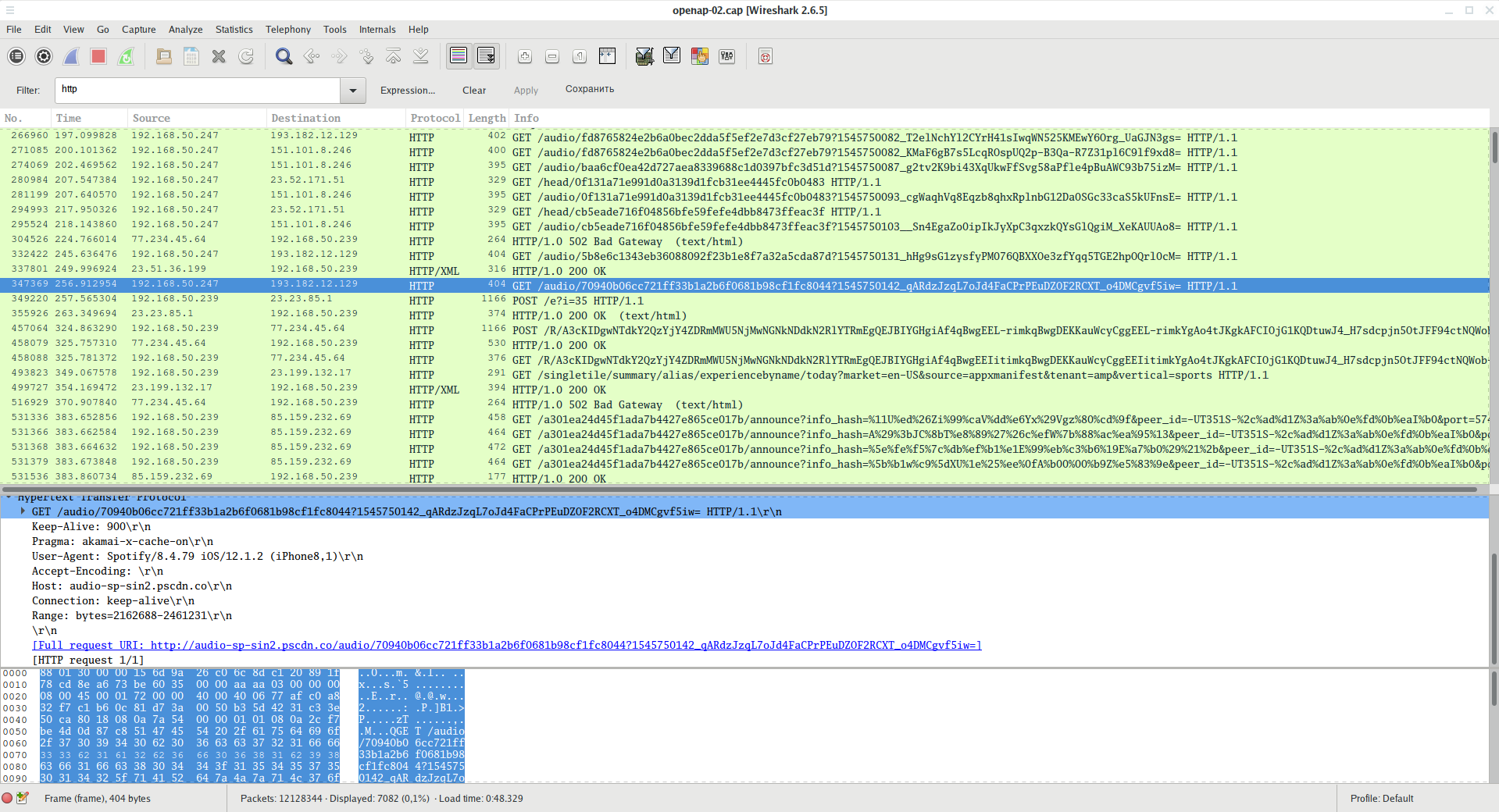 Popular (in some regions) qq.com either does not use encryption, or uses its own algorithm: 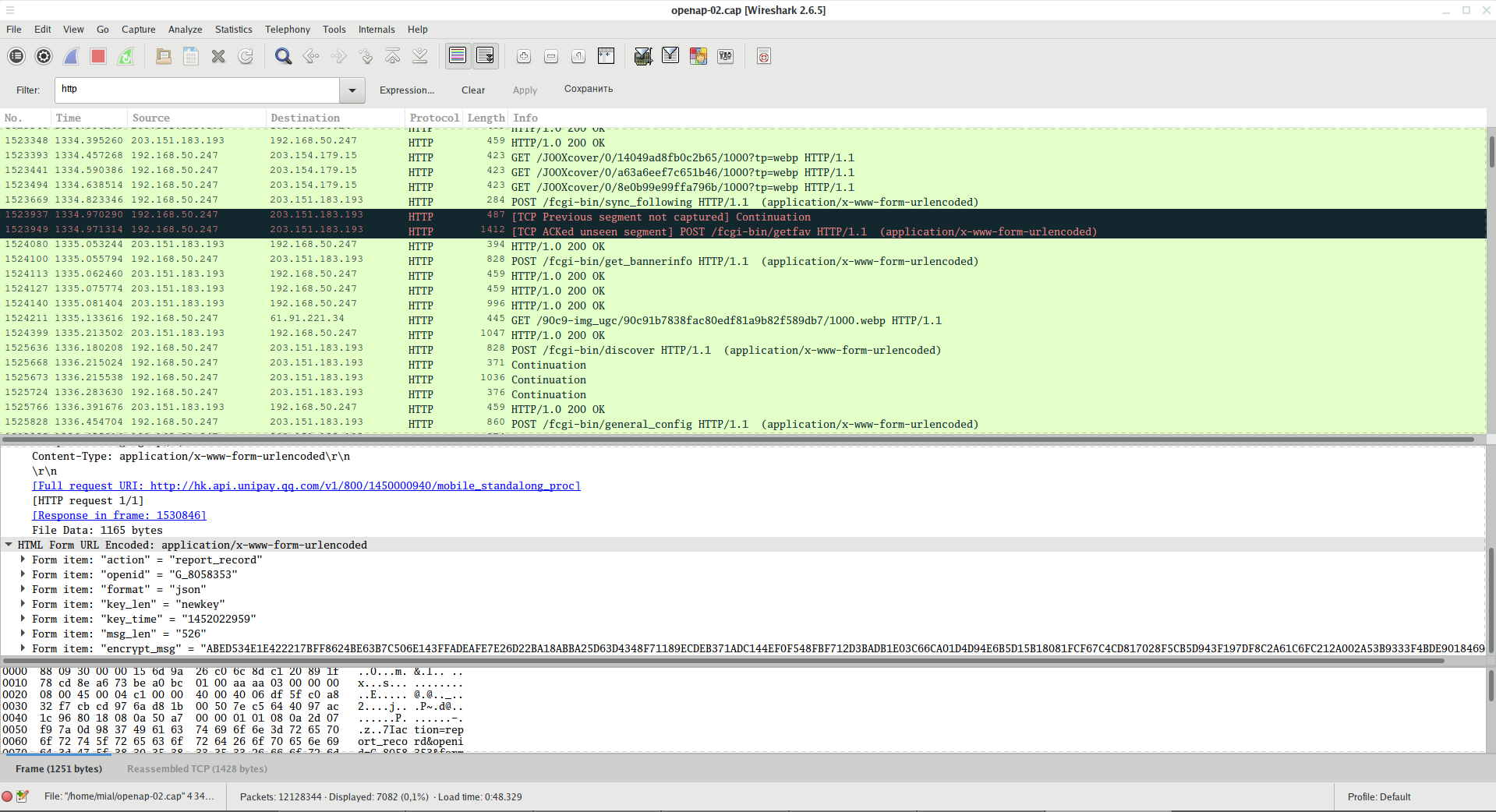 Guaranteed protection against such interception is the use of a trusted VPN service. Reliable VPN service can be considered the one that you set up by yourself, or VPN of your corporate network.