2. How to install Commando VM

4. How to update programs in Commando VM

5. How to hack computers in Windows example

What is Commando VM?

For penetration testers looking for a stable and supported Linux testing platform, the industry agrees that Kali is the go-to platform. However, if you’d prefer to use Windows as an operating system, you may have noticed that a worthy platform didn’t exist. As security researchers, every one of us has probably spent hours customizing a Windows working environment at least once and we all use the same tools, utilities, and techniques during customer engagements. Therefore, maintaining a custom environment while keeping all our tool sets up-to-date can be a monotonous chore for all. Recognizing that, we have created a Windows distribution focused on supporting penetration testers and red teamers.

Born from our popular FLARE VM that focuses on reverse engineering and malware analysis, the Complete Mandiant Offensive VM (“Commando VM”) comes with automated scripts to help each of you build your own penetration testing environment and ease the process of VM provisioning and deployment. This blog post aims to discuss the features of Commando VM, installation instructions, and an example use case of the platform. Head over to the Github to find Commando VM.

Penetration testers commonly use their own variants of Windows machines when assessing Active Directory environments. Commando VM was designed specifically to be the go-to platform for performing these internal penetration tests. The benefits of using a Windows machine include native support for Windows and Active Directory, using your VM as a staging area for C2 frameworks, browsing shares more easily (and interactively), and using tools such as PowerView and BloodHound without having to worry about placing output files on client assets.

Commando VM uses Boxstarter, Chocolatey, and MyGet packages to install all of the software, and delivers many tools and utilities to support penetration testing. This list includes more than 140 tools, including:

With such versatility, Commando VM aims to be the de facto Windows machine for every penetration tester and red teamer. For the blue teamers reading this, don’t worry, we’ve got full blue team support as well! The versatile tool sets included in Commando VM provide blue teams with the tools necessary to audit their networks and improve their detection capabilities. With a library of offensive tools, it makes it easy for blue teams to keep up with offensive tooling and attack trends.

How to install Commando VM

Like FLARE VM, we recommend you use Commando VM in a virtual machine. This eases deployment and provides the ability to revert to a clean state prior to each engagement. We assume you have experience setting up and configuring your own virtualized environment. Start by creating a new virtual machine (VM) with these minimum specifications:

Once the Windows installation has completed, we recommend you install your specific VM guest tools (e.g., VMware Tools) to allow additional features such as copy/paste and screen resizing. From this point, all installation steps should be performed within your VM.

Make sure Windows is completely updated with the latest patches using the Windows Update utility. Note: you may have to check for updates again after a restart.

We recommend taking a snapshot of your VM at this point to have a clean instance of Windows before the install.

Go to the following URL and download the compressed Commando virtual machine repository to your virtual machine: https://github.com/fireeye/commando-vm/archive/master.zip

Unzip the downloaded archive to the root of the C drive, that is, the files should be on the path C:\commando-vm-master\: 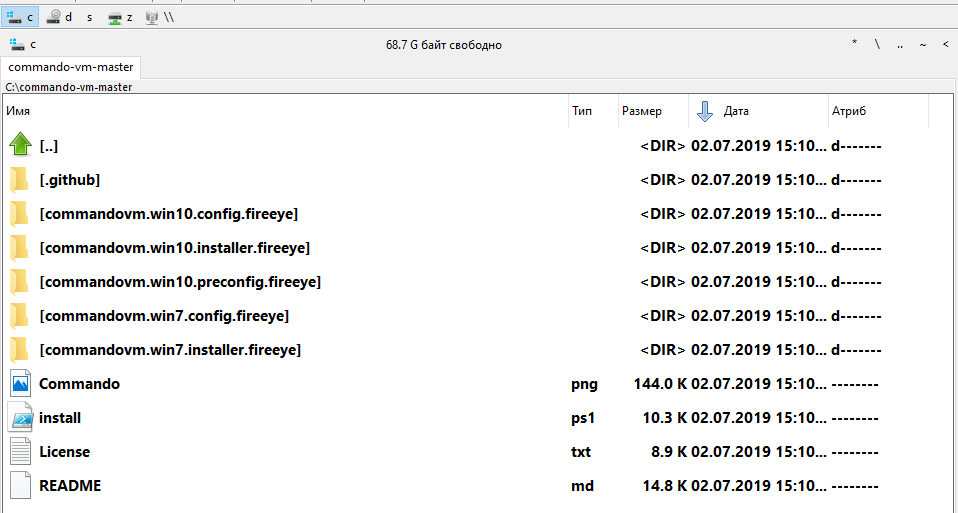 Open the PowerShell console, to do this, click Win+x and select Windows PowerShell (admin) in the list that opens: 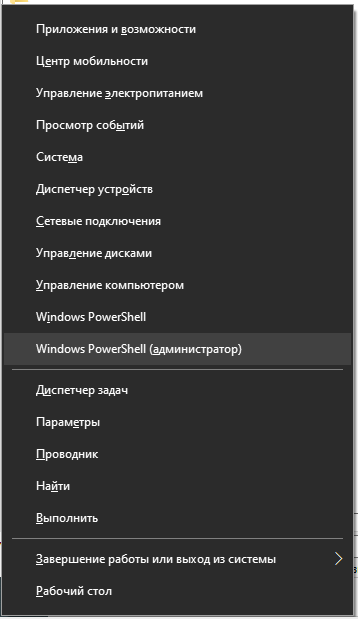 In the console, enter the command

Now we need to change the PowerShell execution policy to unrestricted, to do this, run the following command:

Run at the command prompt:

The script will ask the password of the current user – it is needed in order to automatically log into the system during reboots that are performed during installation. You can also pass the password in advance using the option ‘-password <current_password_password>’:

By the way, if your user does not have a password at all, then just press ENTER during the request.

At the very beginning, the program will do a dependency check: 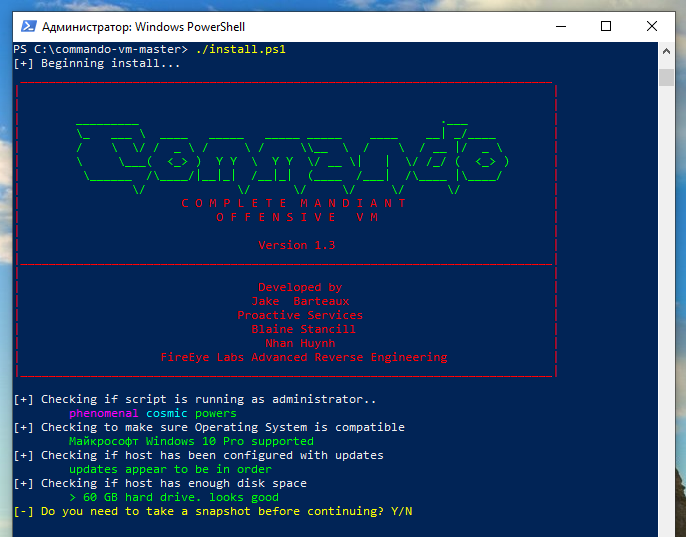 The rest of the installation process is fully automated. Depending on the speed of your Internet, the entire installation may take from 2 to 3 hours (in practice, I had to leave the computer turned on for the night, because by that time the installation had already been going on for about 6 hours). The virtual machine will restart several times due to the numerous software installation requirements. 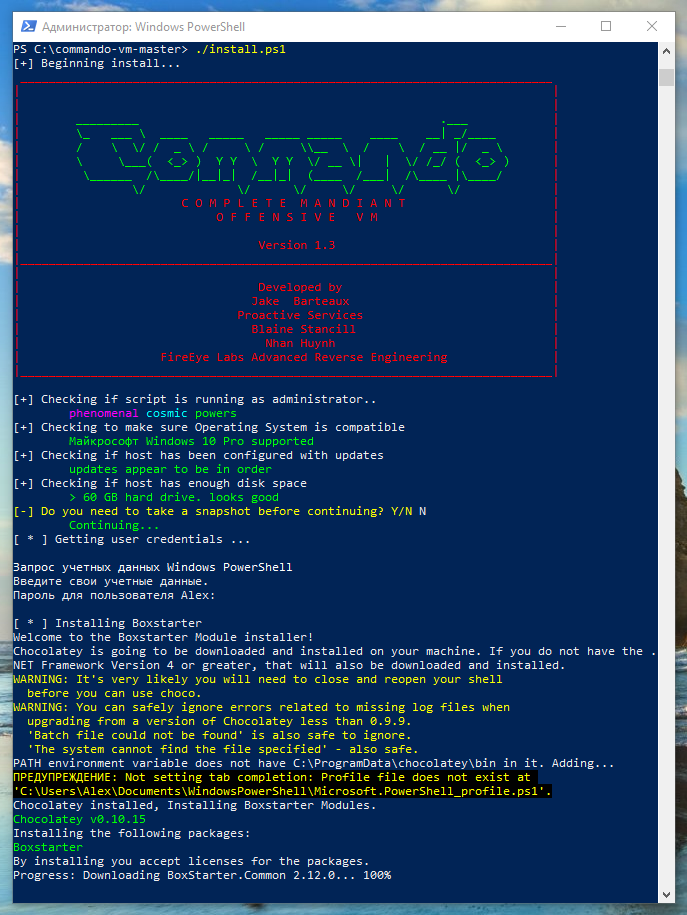 Installing Commando VM is on the way: 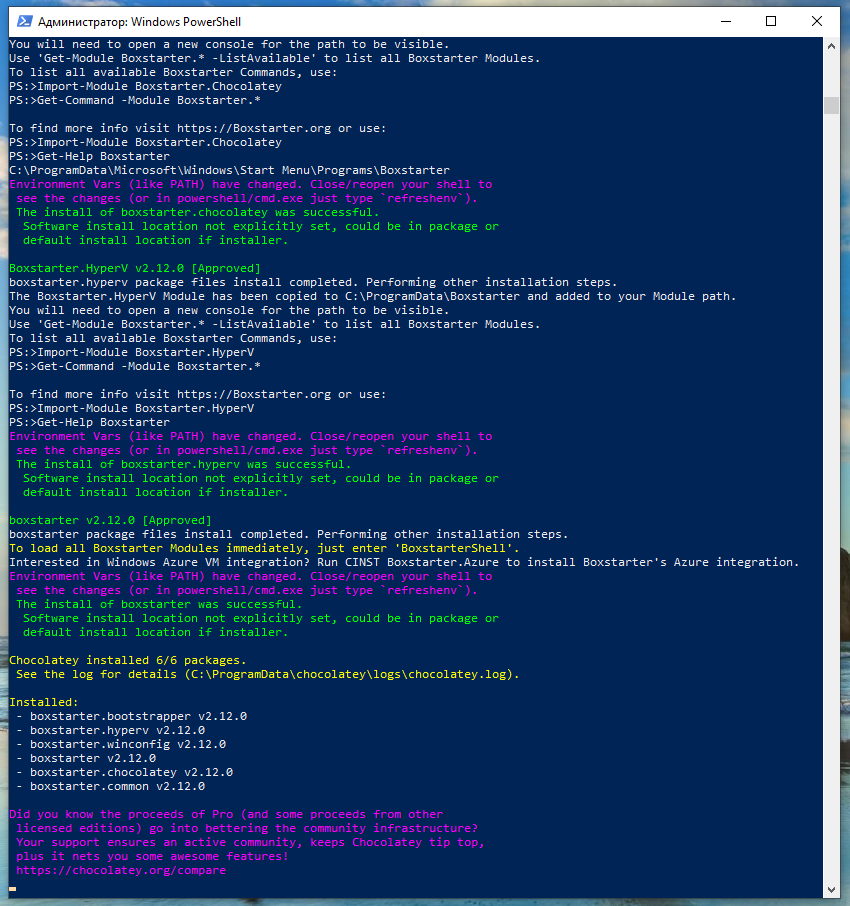 After the installation is complete, the PowerShell prompt remains open, waiting for any key to be pressed before exiting. 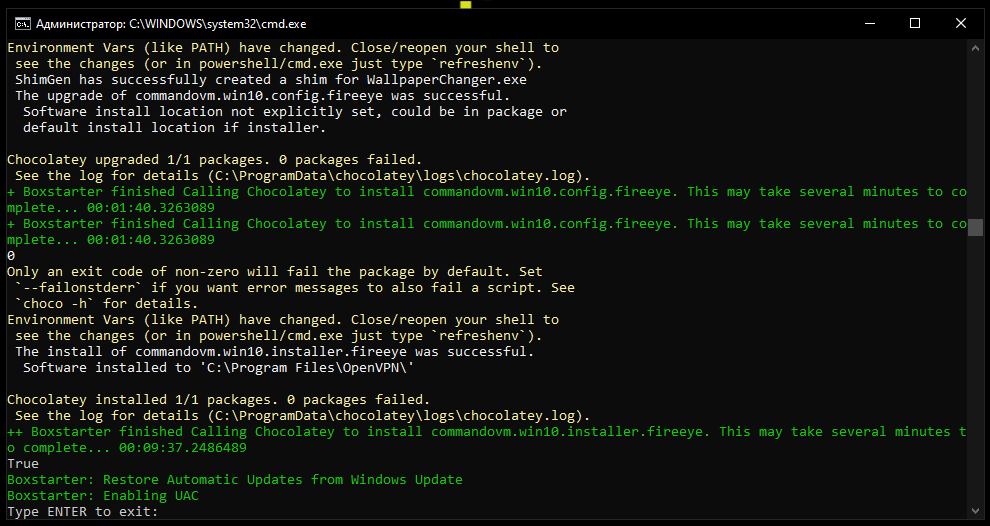 After the installation is complete, you will see the following working environment: 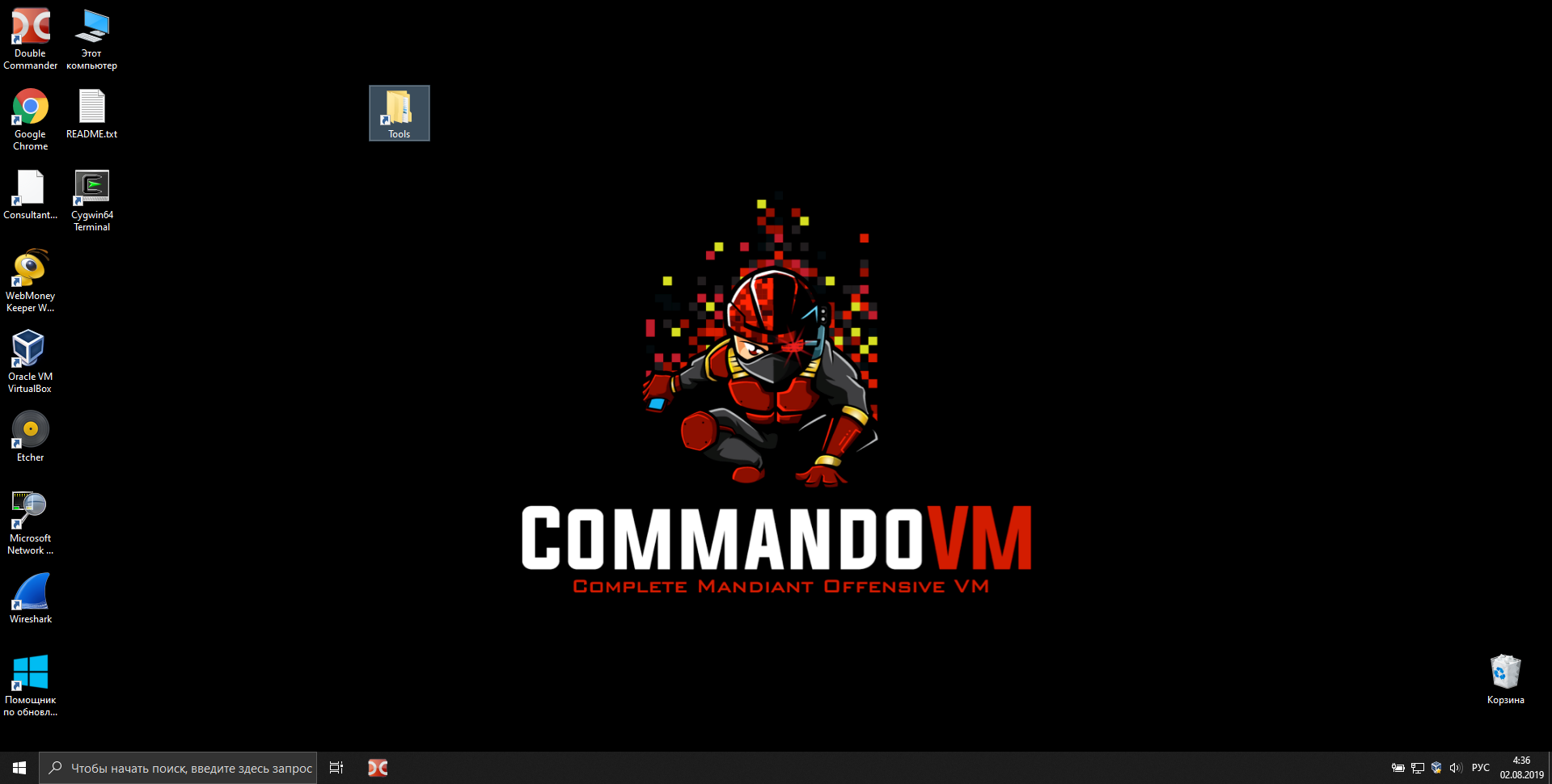 At this point, it is recommended that you restart your computer for the change to take effect. After rebooting, you will have a successfully installed Commando VM! It is recommended to turn off the virtual machine and take another snapshot of the system using virtualization software (that is, in VirtualBox, for example) in order to maintain the clean state of the virtual machine for use in future projects. 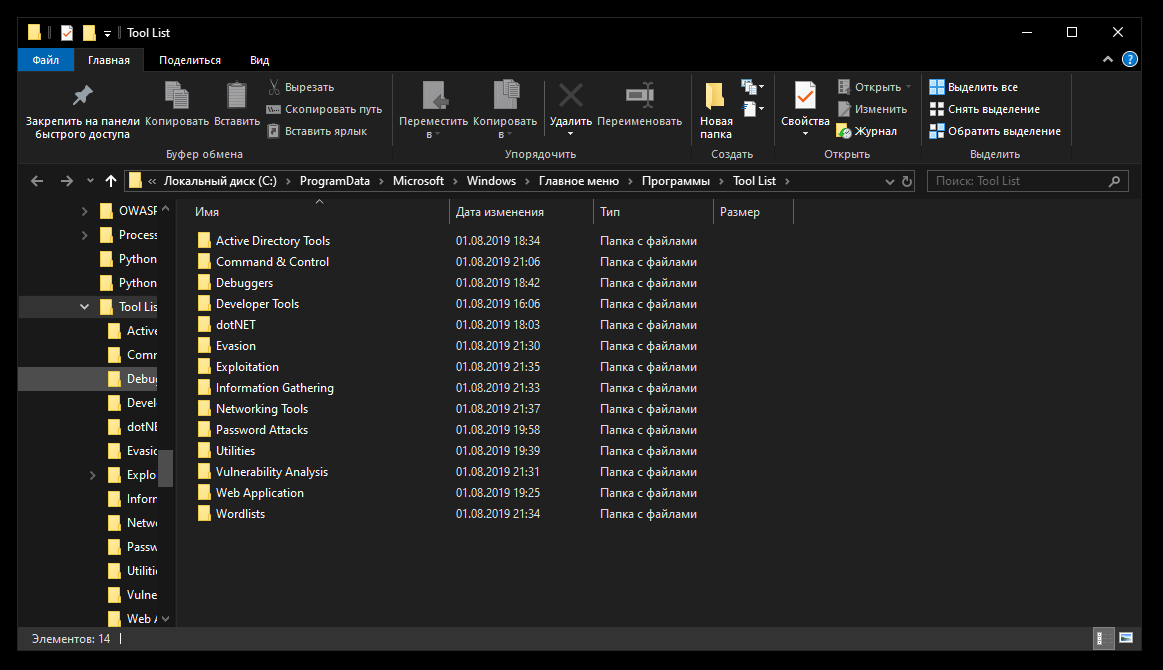 How to update programs in Commando VM

Enter the following command to upgrade all packages to the latest versions: 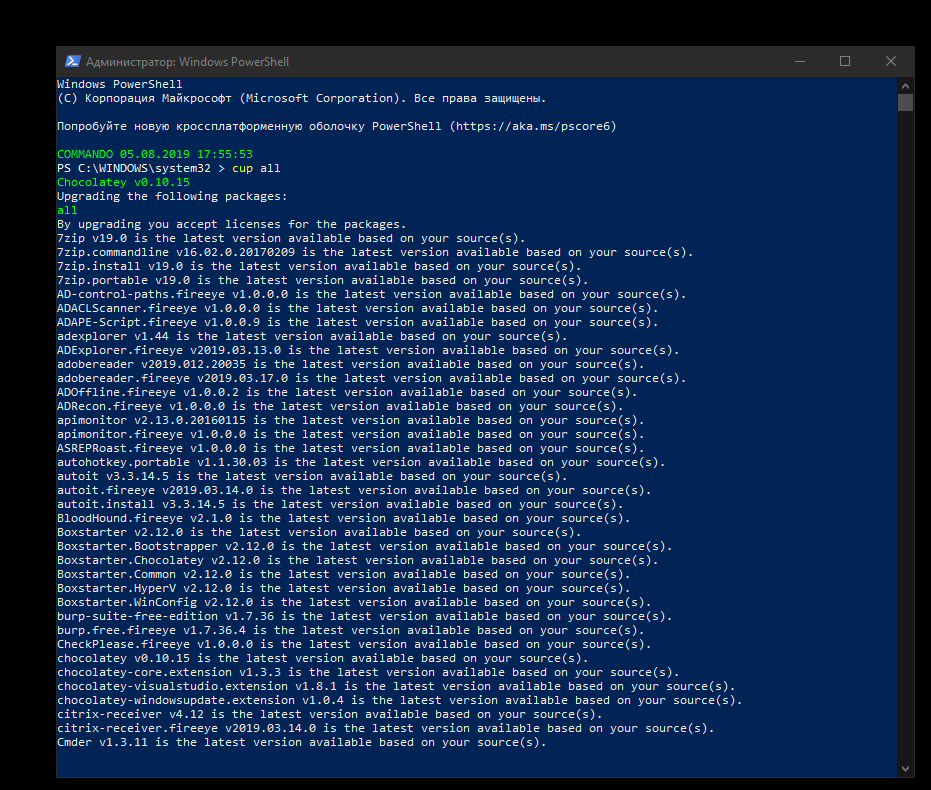 Each package will be checked sequentially and if a new version is found, it will be updated. This takes some time, but much less than during installation. 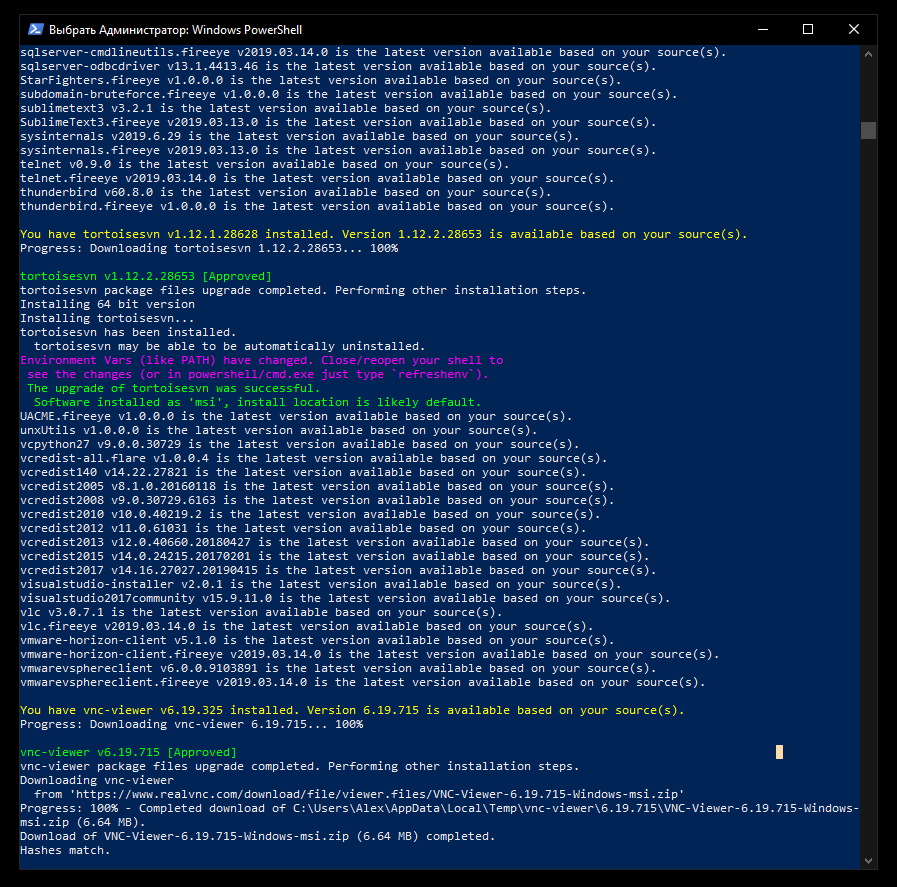 How to hack computers in Windows example

Commando VM is built with the primary focus of supporting internal engagements. To showcase Commando VMs capabilities, we constructed an example Active Directory deployment. This test environment may be contrived; however, it represents misconfigurations commonly observed by Mandiant’s Red Team in real environments.

We get started with Commando VM by running network scans with Nmap.

Looking for low hanging fruit, we find a host machine running an interesting web server on TCP port 8080, a port commonly used for administrative purposes. Using Firefox, we can connect to the server via HTTP over TCP port 8080. 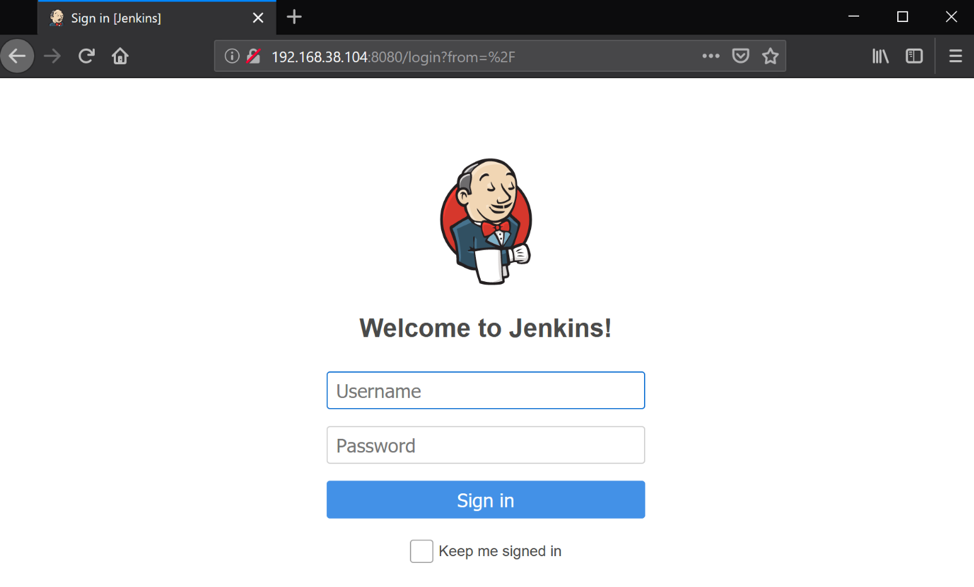 Let’s fire up Burp Suite’s Intruder and try brute-forcing the login. We navigate to our Wordlists directory in the Desktop folder and select an arbitrary password file from within SecLists. 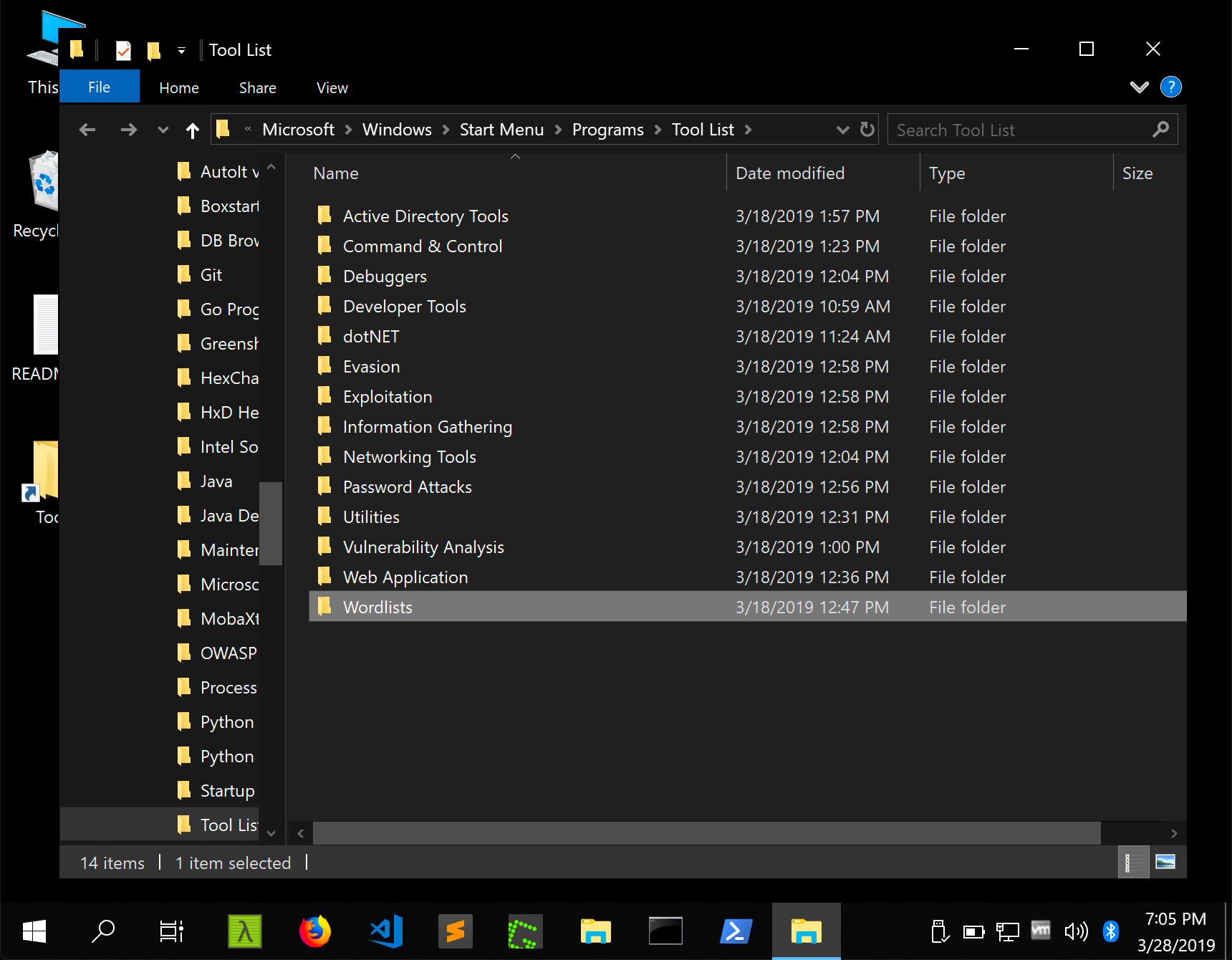 After configuring Burp’s Intruder and analyzing the responses, we see that the password “admin” grants us access to the Jenkins console. Classic.

It’s well known that Jenkins servers come installed with a Script Console and run as NT AUTHORITY\SYSTEM on Windows systems by default. We can take advantage of this and gain privileged command execution. 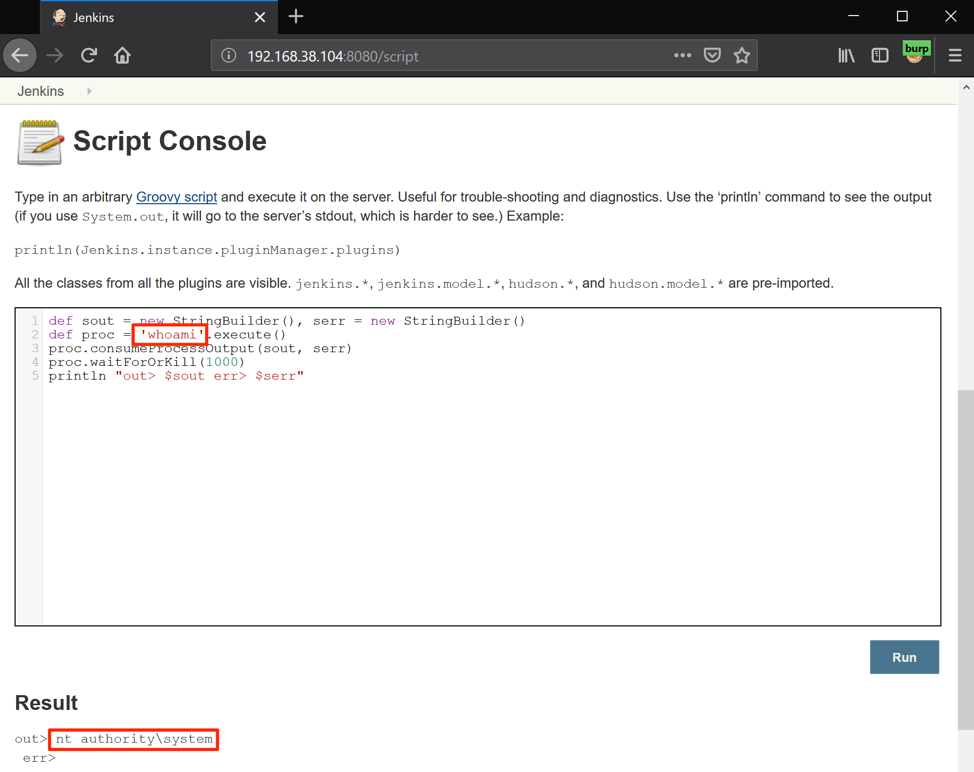 Now that we have command execution, we have many options for the next step. For now, we will investigate the box and look for sensitive files. Through browsing user directories, we find a password file and a private SSH key. 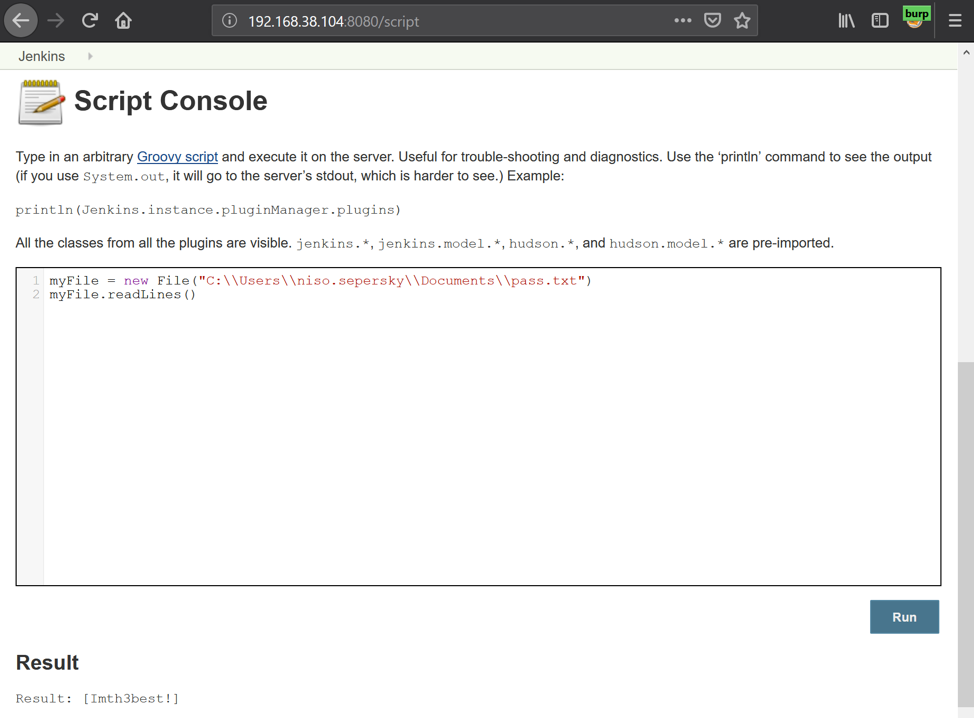 Let’s try and validate these credentials against the Domain Controller using CredNinja.

Excellent, now that we know the credentials are valid, we can run CredNinja again to see what hosts the user might have local administrative permissions on.

It looks like we only have administrative permissions over the previous Jenkins host, 192.168.38.104. Not to worry though, now that we have valid domain credentials, we can begin reconnaissance activities against the domain. By executing

and entering the password, we will have an authenticated command prompt up and running. 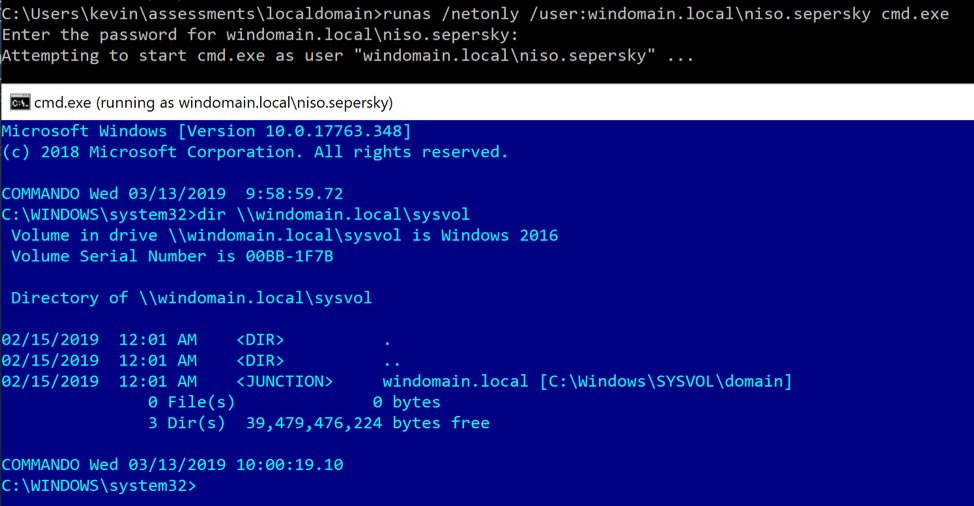 The previous screenshot shows that we can successfully list the contents of the SYSVOL file share on the domain controller, confirming our domain access. Now we start up PowerShell and start share hunting with PowerView.

We are also curious about what groups and permissions are available to the user account compromised. Let’s use the Get-DomainUser module of the post-exploitation framework PowerView to retrieve user details from Active Directory. Note that Commando VM uses the “dev” branch of PowerView by default.

We also want to check for further access using the SSH key we found earlier. Looking at our port scans we identify one host with TCP port 22 open. Let’s use MobaXterm and see if we can SSH into that server. 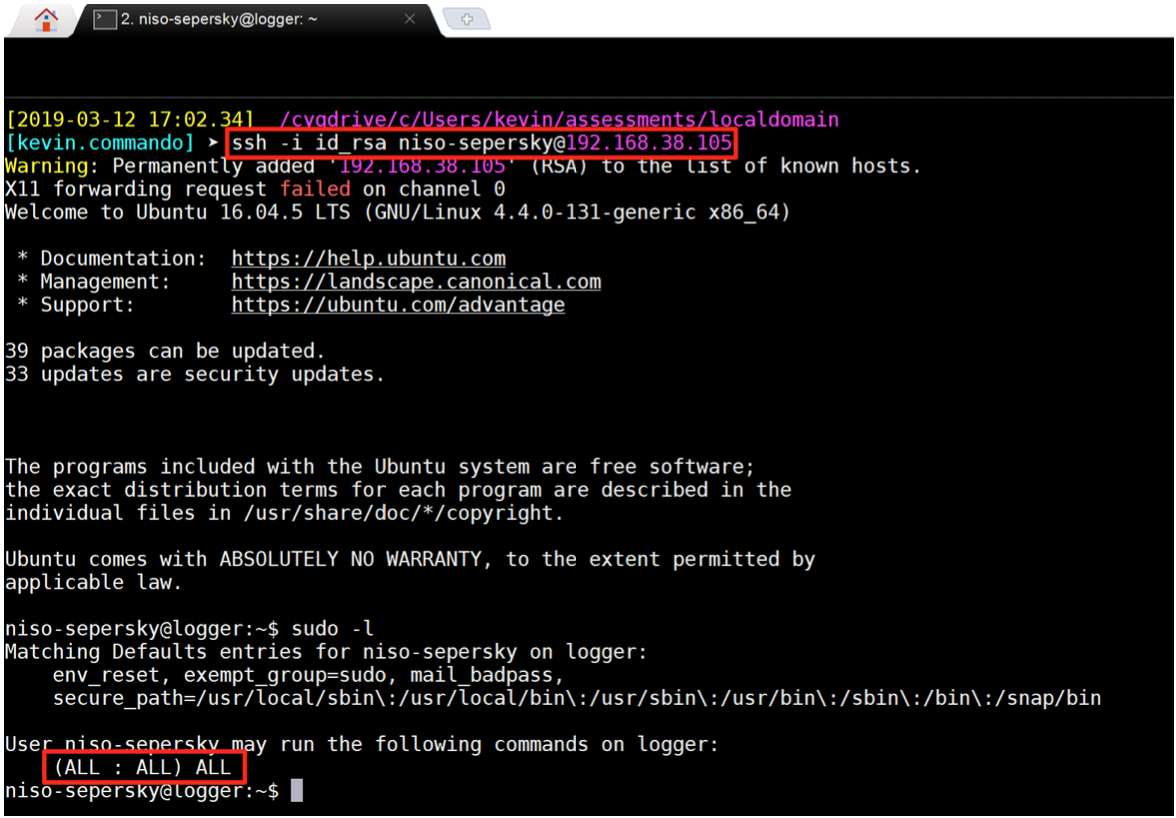 We access the SSH server and also find an easy path to rooting the server. However, we weren’t able to escalate domain privileges with this access. Let’s get back to share hunting, starting with that hidden Software share we saw earlier. Using File Explorer, it’s easy to browse shares within the domain. 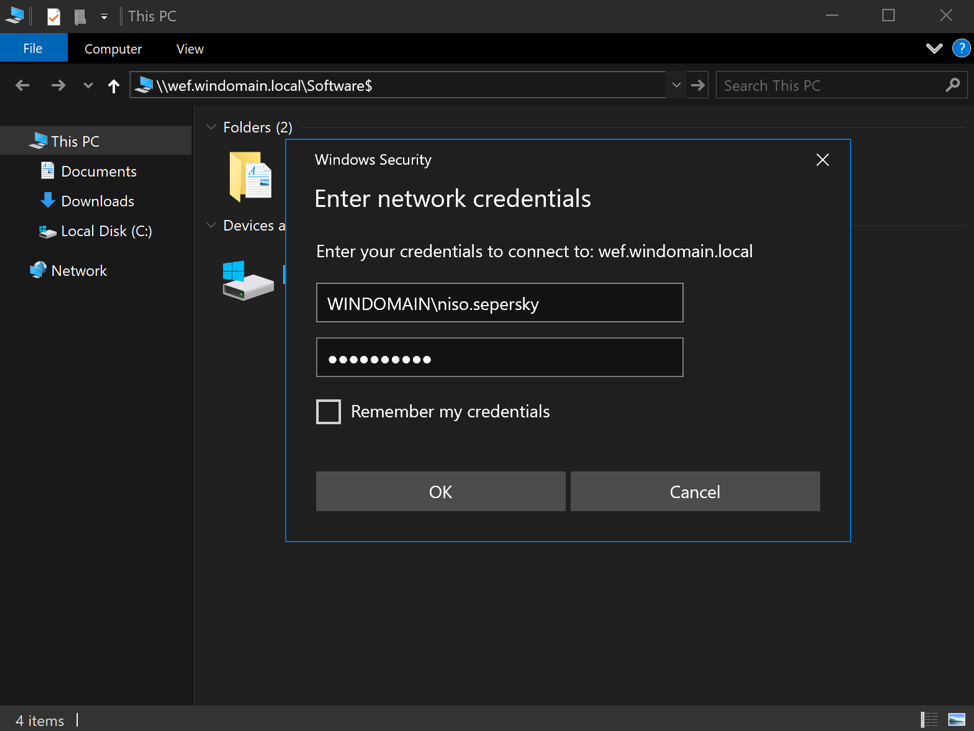 Using the output from PowerView’s Invoke-ShareFinder command, we begin digging through shares and hunting for sensitive information. After going through many files, we finally find a config.ini file with hardcoded credentials. 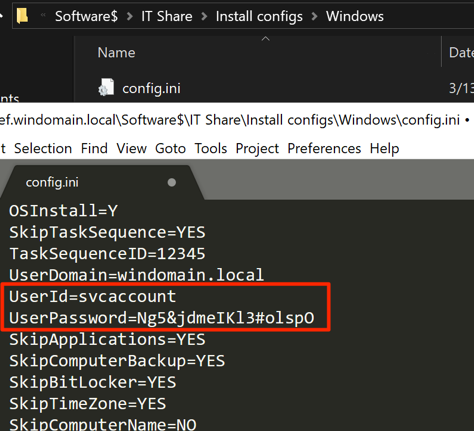 Using CredNinja, we validate these credentials against the domain controller and discover that we have local administrative privileges!

Lucky us, we’re a member of the “Domain Admins” group!