Generation and modification of word lists according to the given rules

To generate word lists, there are very flexible maskprocessor and Crunch programs. They can create any word lists based on complex rules or specific patterns.

You can come up with a huge amount of options, but somehow they come down to a description of which position which symbol should be.

If we take more abstract constructions, for example:

To perform such tasks, the Mentalist program was created. Mentalist is a graphical tool for custom wordlist generation. It utilizes common human paradigms for constructing passwords and can output the full wordlist as well as rules compatible with Hashcat and John the Ripper.

It knows how to build chains of actions – you can set any logic for processing ready dictionaries or modifying a given string. The program has a graphical user interface, and it also works on both Linux and Windows.

How to install mentalist

Installation is quite simple, regardless of whether you decide to use a compiled binary file or build from source codes.

Go to https://github.com/sc0tfree/mentalist/releases and download the latest version for Windows, that is, a file of the form Mentalist-v*-Win.zip. Unzip the archive and double-click the Mentalist.exe file.

How to use mentalist

To understand the work of Mentalist, you must consider the basic concepts of the program.

Mentalist generates wordlists by linking together nodes, which form a chain. The first node in a chain is always the Base Words node. When the chain is processed, each Base Word passes to the next node in the chain, which might modify the word, leave it the same or create more variations of it. Finally, the results are written to an output file as either the full wordlist or rules to generate the equivalent list.

There are 5 types of nodes. Each type has its own set of attributes, which can be added in any combination. A node's attributes determine its function. Furthermore, attributes within the same node are mutually exclusive from each other.

Some nodes may produce more than one output word for each input word. In such cases, only the set of unique output words for a Base Word is passed on to the next node. In other words, each node performs de-duplication on each base word.

Each node has the ability to perform one or more actions on the input words. These actions are specified in each node's attributes. Attributes within the same node are mutually exclusive of each other and, as a consequence, a node can have no duplicate attributes.

If a word does not match criteria for substitution, it will be output unchanged.

Note: Replace First Instance and Replace Last Instance are not compatible with Hashcat & John rules. If attempting to output rules using one of these attributes in your chain, Mentalist will ask if you would like to replace these attributes with the Replace All Instances, which is a supported rule.

One at a Time substitution will only substitute one specified character at a time.

All at Once substitution will substitute all characters at once.

This option outputs the entire wordlist, as specified by the chain. The estimated number of words and filesize can be found in the top menu of Mentalist.

Note that the First and Last Substitution attributes are not compatible with Hashcat/John. When a chain contains these attributes, saving to Hashcat/John will warn that First or Last will be changed to All in the rules output.

This output option allows you to output the base words into a single file to be used with your rules. This is useful if you have multiple sources of base words (multiple Base Word attributes).

Mentalist is able to save chain files for future use. To save a chain file, go to Load/Save→Save Chain, which will then prompt you where you'd like to save the file. For organization, saved Mentalist chains should have the extension .mentalist, which is enforced in the application on most OSes.

Mentalist is able to load chain files by clicking on Load/Save→Load Chain. If the chain file refers to a user-specified file that is not present on the current system, Mentalist will put a red box around that file attribute and will prevent processing. To fix this, click on the Fix... button next to the file and specify a local file in its place.

Examples of use Mentalist

Then click the “+” sign next to “Base Word”, select “Custom File…” and specify the dictionary you want to change. 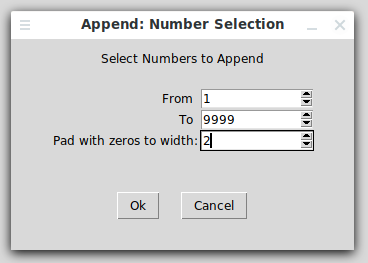 Then click the “+” sign next to “Substitution”, then select “Replace All Instances…” and then “User Defined…”, put the necessary check-boxes and switch to “All at Once”. 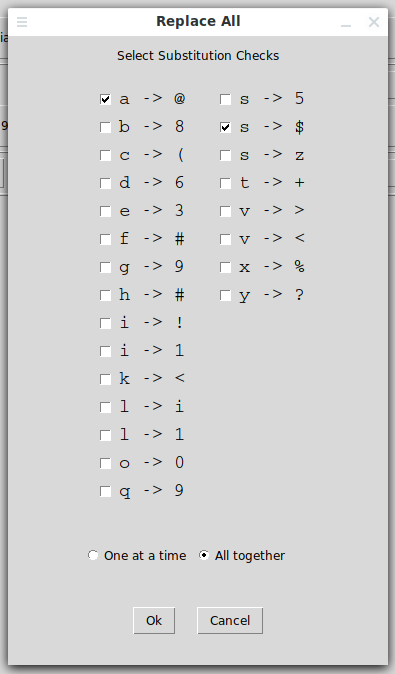 Please note that if you select “One at a Time” instead of “All at Once”, then the first character will be replaced first and then the word will be sent further along the pipeline, then the second character will be replaced and the word will be sent again along the pipeline. That is, the “One at a Time” option increases the number of new words by a factor – in accordance with the number of replacements.

To save a new dictionary, click “Process”, then select “Full Wordlist”.

Suppose now we need to create a dictionary based on female names in which the letters “a” are replaced by the symbol “@”. Moreover, it is necessary that both the original name and the name with the replacement of characters are preserved. Then after the name comes a dash. Then the date is inserted in the DDMMYYYY format.

Click the “+” sign next to “Substitution” again, then select “Replace All Instances…” and then “User Defined…”, put the necessary check-boxes and switch to “All at Once”.

Then click the “+” sign next to “Substitution”, then select “Replace All Instances…” and then “User Defined…”, put the necessary check-boxes and switch to “All at Once”.

Then click the “+” sign next to “Append”, then select “Special Characters…” and put a check-boxes in front of the “-” symbol: 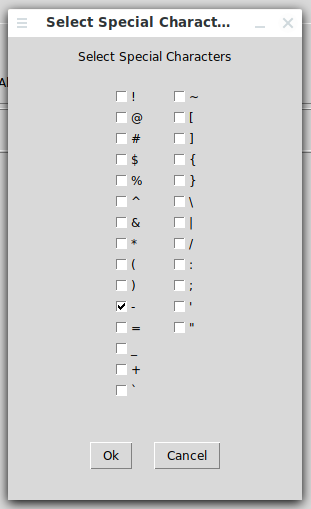 Now again press the “+” sign next to “Append”, then select “Numbers” and then “Dates…”. Set the desired range and format: 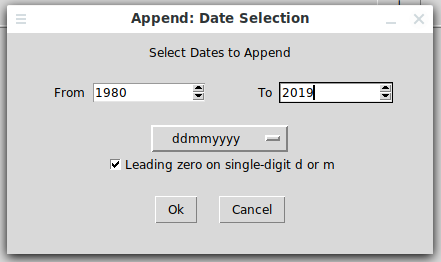 We get the following result, pay attention to the approximate number of words in the new dictionary and the size of the dictionary in megabytes: 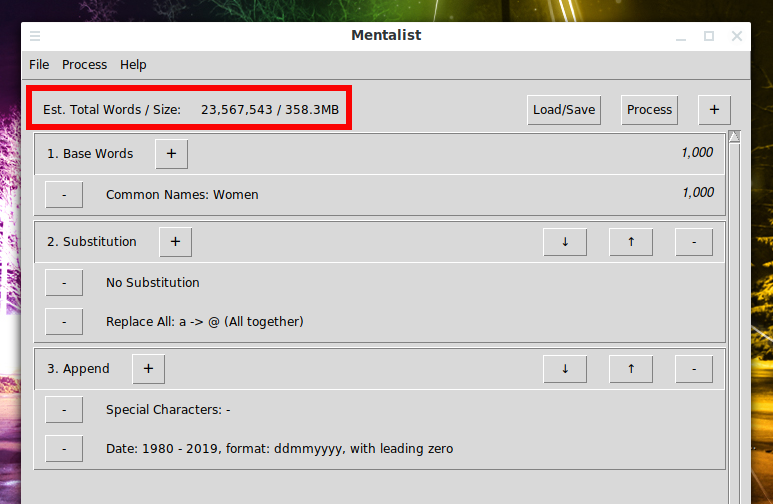 To save a new dictionary, click “Process”, then select “Full Wordlist”.