The default TX-Power of wireless is set to 20 dBm but you can increase it with a little trick to 30 dBm but let me warn you first that it might be illegal in your country, so use it at your own risk. Moreover some models will not support these settings or wireless chip may state that it "can" transmit with higher power, but the device's manufacturer probably did not place the appropriate heat sink in order to accomplish this.

In different countries, legislation and technical standards varies, including in relation to Wi-Fi. In some countries it is not allowed to use the frequencies of some Wi-Fi channels (for example, channels 12, 13 and 14 can not be used in the USA). In most countries, a Wi-Fi signal power limit of 20.0 dBm is set. But there are countries in which there is a limitation of 30.0 dBm. You can take advantage of this loophole (make your wireless thinks it is located in a country where 30.0 dBm is allowed) and raise its TX Power to a value of 30.0 dBm.

Regulatory domains (or "regdomain") is the country in which this device is supposed to work. There is also an accompanying database, in which are prescribed the permitted frequencies and the allowed power.

In theory, the described method should work for many wireless cards, but in practice there are the following limitations:

To check capabilities of your wireless adapter issue the command:

For example, the following frequencies and power are allowed for the US: 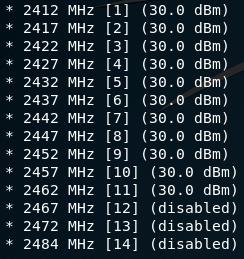 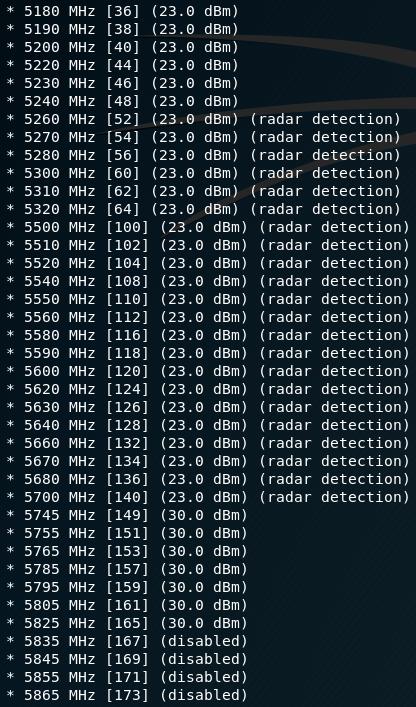 You can examine the full current database in pain text here.

Countries where allowed channels 1 through 13 on 30.0 dBm power are (for instance):

Note that for channels at 5 GHz they have different values (different list of allowed frequencies and powers).

Next, I'll show the power increasing of Alfa AWUS052NH

in Kali Linux. The old guides tell to install additional packages, but currently this is not necessary. Everything you need is already available in Kali Linux!

To find out which region is currently configured, run the command:

The string country 00 indicates that I have not set any value and the default settings was applied.

To insure the setting was applied run the command:

At the same time, you can look at the new features with the command: 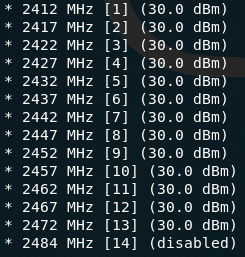 To view the name of the wireless interface and its current status, use the command:

Next, increase the power (replace wlan0 with the actual name of your wireless interface): 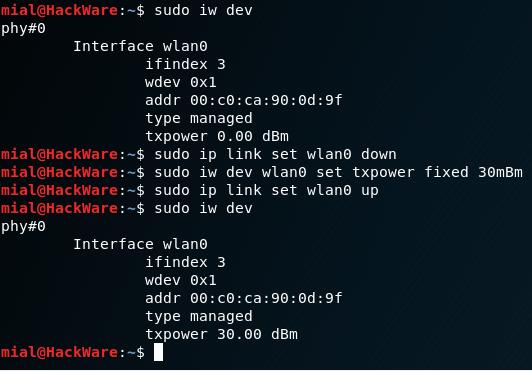 The line txpower 30.00 dBm indicates that we have succeeded.

The above commands have no effect for AWUS036NHA

. The driver of this adapter ignores regulatory domain value.

If you have Alfa AWUS036NHA or any other that ignores settings of regulatory domain, this is no reason to give up.

We are able to change database of the world regulatory domain.

First let's check which country your wireless card is made for: 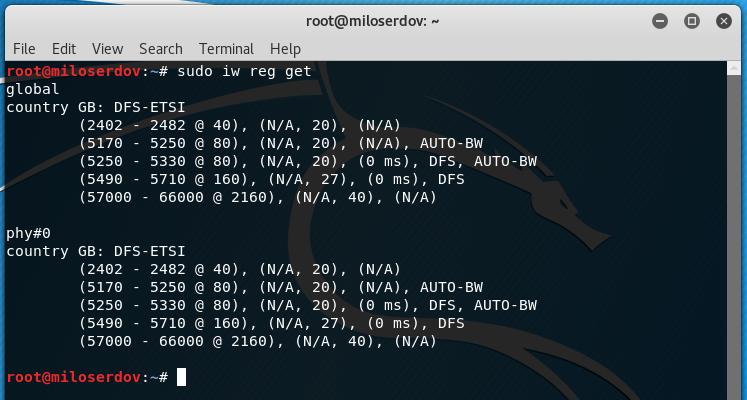 In my case, the country GB line indicates that the adaptor was produced for the country that is named GB in the database.

My method differs from other tutorials, where the wireless-regdb and crda packages are manually installed. These packages should already be installed on your system (in Kali Linux is the default). The only thing we do is replace the database file.

Install the dependency required to compile the database:

We clone the source files:

Now we need to edit the database file:

In the file, find the country 00 line and replace line after it with something like that (correct it up to you):

Now I find and change the lines according to the country wireless made for, for me it is GB:

As a result, a binary file of the database (regulatory.bin) was created from the text file. We will use it to replace the file with the same name in the system.

We copy our modified database:

We copy the required public key (the database file is signed with a specially generated key for our user):

Now do not use sudo iw reg set BZ.

mean we are able increasing the power to 30 dBm.

After we patched the database, there is no longer any need to change the value of the regulatory domains for any wireless interface!

Changing value of regulatory domains lets to unlock some channels that might not be available in your country.