How to capture handshakes of Wi-Fi networks automatically

There are already several options available for automatically capturing handshakes from Wi-Fi access points, for example:

Hashcatch deauthenticates clients connected to all nearby Wi-Fi networks and tries to capture the handshakes. It can be used in any Linux device including Raspberry Pi and Nethunter devices so that you can capture handshakes while walking your dog. Hashcatch runs indefinitely until keyboard interrupt.

The Hashcatch script from time to time repeatedly scanning new Wi-Fi networks and add them to attack. That is, if you want to get a handshake in automatic mode, then this script can be run, simply put, not being in front of this AP, but when leaving the house. That is, the program will try to capture handshakes from all Access Points that will meet along the entire route of your way. It is clear that you need to move slowly enough, stopping in front of possible places of Wi-Fi networks congestion.

How to install Hashcatch on Kali Linux

Creating the necessary folders and files for the program:

Now you need to generate the configuration file, for this run the command:

The script will ask you for the name of the wireless interface, if you do not remember it, then use the command:

In the future, if you need to choose a different wireless interface to use, then run the command again:

Or simply open the /etc/hashcatch/hashcatch.conf file with any text editor and enter the name you need. 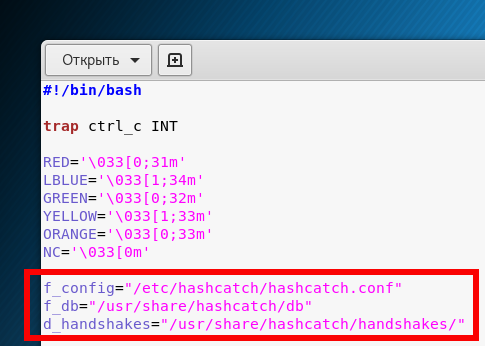 If you wish, you can edit them to more convenient locations:

To do this, replace the values of these variables:

If you have only one Wi-Fi interface, it is recommended to close programs that may affect it:

If the interface is down, set it to up (replace wlan0 with your interface name)

The Hashcatch program puts the interface in monitor mode a little unusual, as follows:

This command does enable monitor mode, but also perform checks whether the Wi-Fi card supports wireless injection. If the test fails, then Hashcatch will quit and write that it could not be put into monitor mode. Therefore, each launch of Hashcatch requires some time and, if it did not work out the first time, it makes sense to try to launch it several more times.

Immediately after this, it will begin to search for wireless networks, then to deauthenticate clients of these networks and will try to capture handshakes.

The program will run continuously until you press CTRL+c. During operation, as well as after completion, it will be written exactly how many hashes were captured:

Access points for which handshakes are captured, Hashcatch writes to the /usr/share/hashcatch/db file to view the contents of this file:

Values are separated by commas. By latitude and longitude, you can search on Google maps: https://www.google.com/maps/, just enter these two numbers, for example:

You can also add an ‘ignore’ field to mention the WiFi networks you want hashcatch to ignore while running.

If you have already captured handshakes for some wireless networks, then it makes sense to ignore them. Another example of the use of ignore list: I launched Hashcatch, put the laptop in my backpack and went for a walk, see how many handshakes I could get. In order for the computer to be constantly connected to the Internet, I created a Wi-Fi hot spot on my mobile phone and connected to it from my laptop with a second (built-in) Wi-Fi card. I needed this so that Hashcatch is able to receive coordinates for APs.

In order not to attack some APs, open the configuration file /etc/hashcatch/hashcatch.conf:

And add the ignore directive there and list the APs that do not need to be attacked. For example, I have this AndroidAP:

If you want to exclude several APs, then separate them with a comma. It's okay if the names of the AP contain spaces, but there should not be spaces next to the equal sign (=) and between commas, for example:

You can view the list of handshakes with the command:

Each handshake is placed in a separate file.

To verify them, you can run the following command: 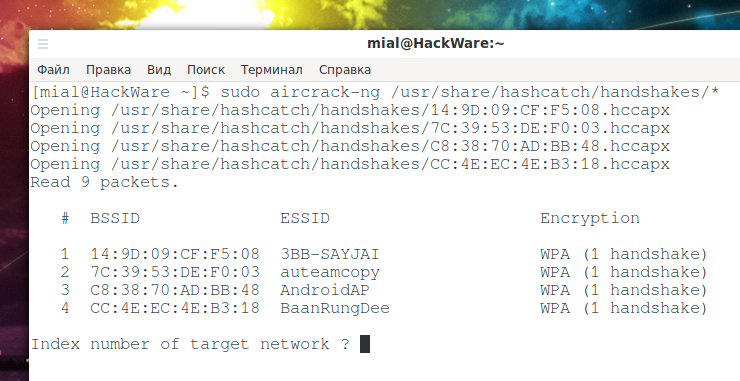 You can brute-force password for captured hashes by different programs, the fastest of them is Hashcat.

To start dictionary attack against Wi-Fi hash, a command of the form is used:

To start mask attack against Wi-Fi hash, a command of the form is used:

For example, with the following command, I launched an attack against the 14:9D:09:CF:F5:08.hccapx hash using the mask 6?d?d?d?d?d?d?d?d. This mask means 9 characters, the first of which is the number 6, and the rest can be any numbers – these are typical phone numbers for places where the handshake is captured:

Hacking was successful, the found Wi-Fi password is in the line:

Means that you need to run the program with the --setup switch and then specify the name of the Wi-Fi interface.

It means that the program cannot: 1) set the interface into monitor mode; or 2) cannot successfully complete the wireless injection test. If your adapter supports both monitor and wireless injection, then try starting up again.

It means that: 1) the Wi-Fi interface is not specified in the configuration file, or 2) the specified Wi-Fi dongle is not plugged to the computer at the moment. Therefore, plug the wireless adapter or run the program with the --setup switch to specify the name of another interface.

Please note that in BlackArch, where the program is installed from the standard repository, each update of the program deletes all previously captured handshakes, deletes the /usr/share/hashcatch/db file and erases the configuration file!

In general, the script is quite simple, but the task of capturing handshakes is quite simple as well, so it copes with it. I especially like the fact that each captured handshake is saved in a separate file – it is very convenient, you can immediately proceed to password brute-force.

In one of the following articles, I will talk about another excellent program for automatically capturing handshakes while constantly monitoring the emergence of new Wi-Fi networks with the addition of them to attack. In addition, that program also automatically captures PMKID!