Automatic handshake and PMKID capture from all access points

This tutorial is devoted to a program that can collect handshakes and PMKIDs from all access points near your in the access range. The program can work in a fully autonomous mode:

If you missed and do not know what PMKID is, then see the article “Hacking Wi-Fi without users” - there is an explanation.

In the current manual we will consider bettercap. The second version of the program received a lot of changes and new features. The program is under active development and is constantly gaining new features. For an overview of the bettercap basic usage, see the article “bettercap 2.x: how to install and use in Kali Linux” and I strongly recommend starting the acquaintance with that article.

The referenced article already mentions working with Wi-Fi networks, but, firstly, since then a lot has been added specifically for the wifi module, and secondly, this tuturial focuses on Wi-Fi capabilities of bettercap and it will show how to make an autonomous system, which itself will collect hashes for hacking Wi-Fi.

Let's start with a review of the new features. Added a new wifi.assoc command to perform an RSN PMKID attack, i.e. client-less attack.

As well added wifi.region and wifi.txpower parameters. They are responsible for the region in which the Wi-Fi adapter operates and for its power. You will find more details in the article “How to increase TX-Power of Wi-Fi adapters in Kali Linux”. These parameters are important not even because they can improve something, but because they can degrade! The fact is that I have ALREADY set up the desired region and the TX-Power has been increased to the maximum. But the bettercap program also has default values, after launch it sets the region to BO and tries to increase the power to 30. For my adapter, this does not work! That is, BEFORE launching bettercap, my Wi-Fi adapters operates at 30 dBm, and AFTER running bettercap, my adapters switch to 20 dBm… It is possible that you have a similar situation, so we will consider how to avoid problems with this.

New capabilities for parsing WPS and the wifi.show.wps command have been added. By the way, in general, collected the information looks like this: 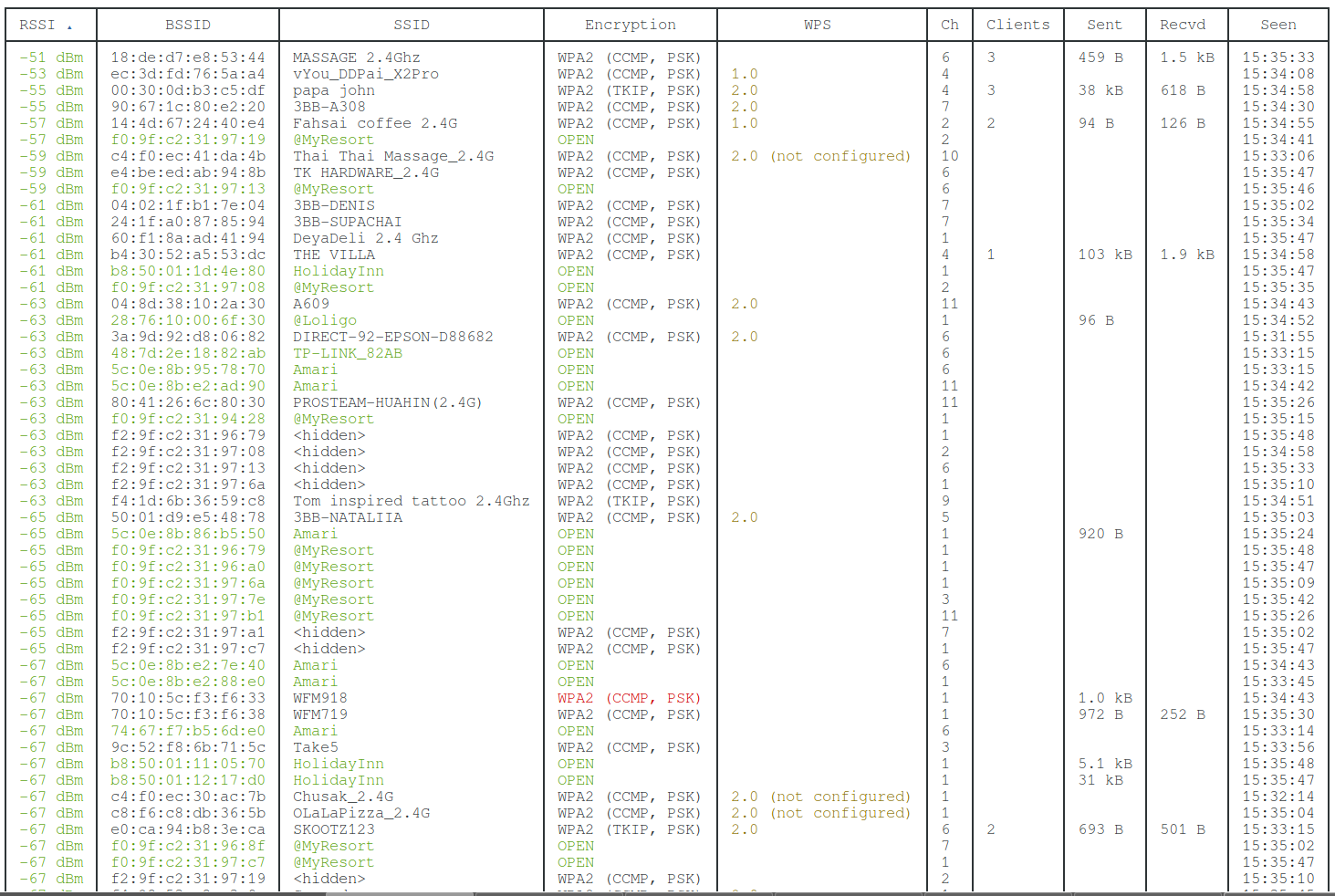 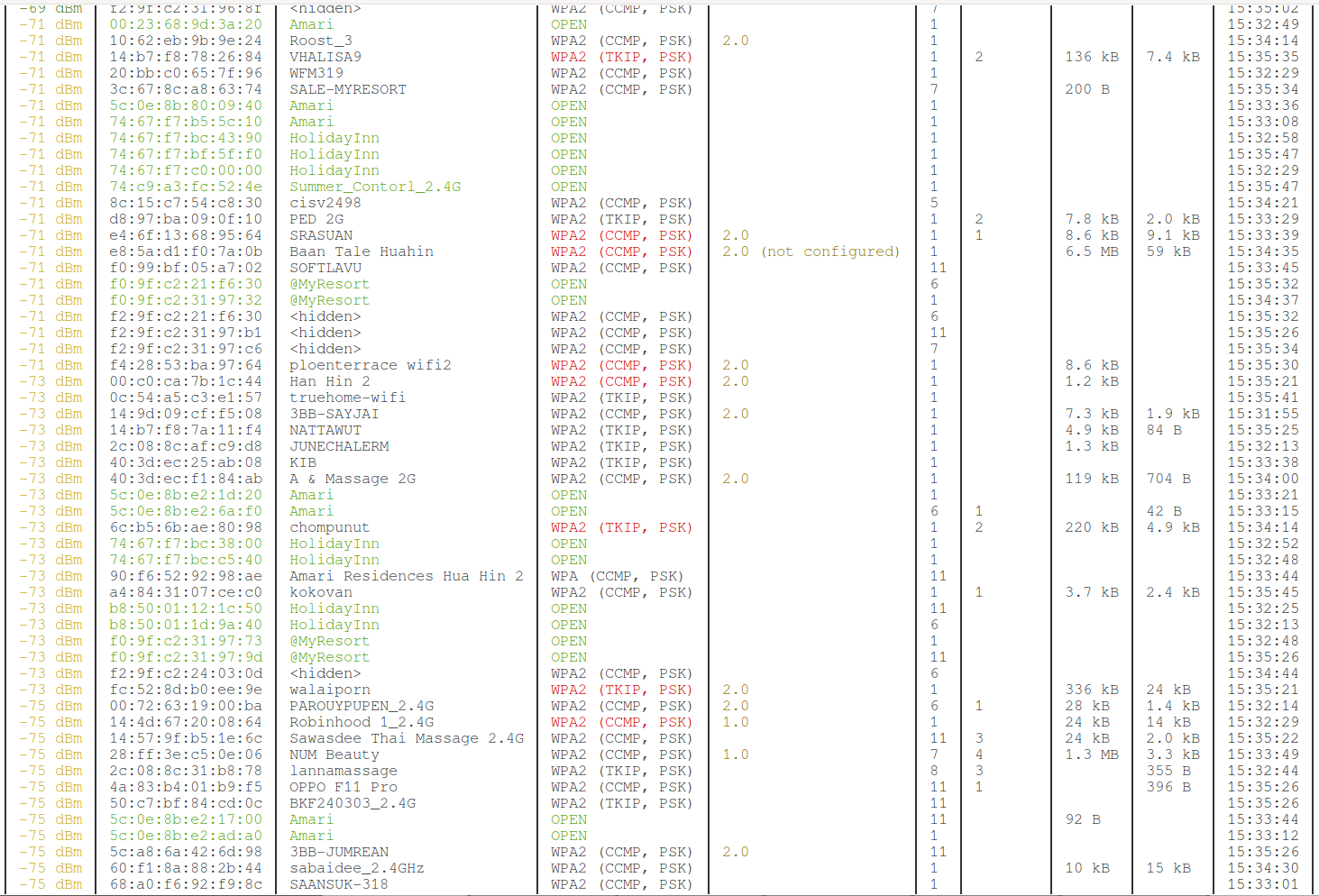 Other changes are less significant:

The bettercap program can set wireless interfaces to monitor mode and can set it from the down state to the up state, but I DO NOT like how it does it)))) Therefore, I will do it manually.

This is optional, but I prefer to stop the NetworkManager service:

We look at the name of the wireless interface:

I launch bettercap, specifying the name of my Wi-Fi interface:

I start collecting data on Wi-Fi in the district:

Data is displayed in a list as new devices are discovered:

To display the table, run the command:

To analyze only certain channels, you can set the value of the wifi.recon.channel variable as follows:

But the changes will not take effect immediately – you had to set them either before launching Wi-Fi reconnaissance, or restart the recon module:

Although personally for me, the settings of wifi.recon.channel does not affect anything – the dongle continues to scan all the frequencies that it supports.

What did we do to capture handshakes before? It was necessary to configure and run the sniffing module as follows:

Now this is NOT necessary!

The wifi module itself can save handshakes. By default, they are written to the ~/bettercap-wifi-handshakes.pcap file. This value can be changed by setting the variable wifi.handshakes.file:

Please note that ~ does not indicate the current user's home directory, but the root directory, since the program starts with sudo.

To capture the PMKID of a specific access point, run the command

where, instead of the BSSID, specify the MAC address of the target AP.

If you need to try to capture the PMKID of all APs around you, then do:

Similarly, with captures of a full 4-ways handshake – to attack the target AP:

To attack all APs:

The total number of captured handshakes will be shown by the command:

For a more thorough analysis, it is recommended to use aircrack-ng:

The author of bettercap, his name is Simone Margaritelli (evilsocket), has created a twitter account for pwnagotchi. The pwnagotchi device is an ARM computer with a battery and an electronic ink screen on which bettercap and custom software are installed. Pwnagotchi is able to independently collect PMKID and full handshakes from Wi-Fi networks. If I understand correctly, Simone has so far assembled only two of these devices. In replies to tweets, people wrote, “Yes, yes, they’ve already been waiting.” In principle, it is not necessary to wait – all the functionality is already in the bettercap itself, you just need to write a small caplet with commands, all this can be run on the laptop and you will get a pwnagotchi-godzilla. Well, or you can also buy an ARM board, a battery, a small screen and assemble your own prototype of pwnagotchi.

Let’s try to reproduce pwnagotchi functionality on our usual hardware. To do this, we need to create the pwnagotchi.cap file:

You need to start it like this (instead of wlp0s20f0u2, enter the name of your wireless interface):

Thus, I walked around with a laptop and, as bettercap assures me, I captured dozens of handshakes. But strict aircrack-ng is far from recognizing all of them suitable for cracking: 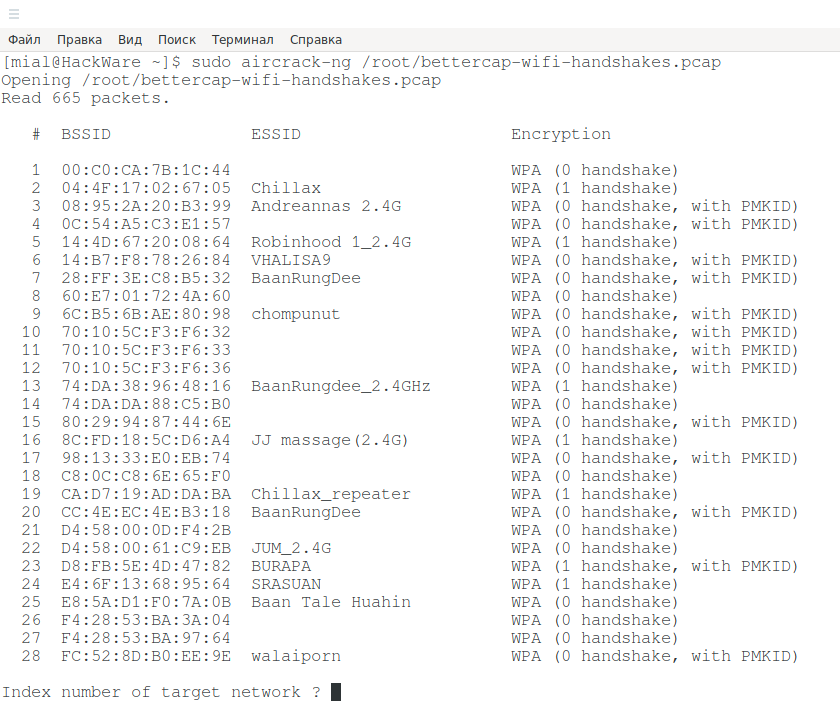 In this caplet, everything is pretty clear. Commented out lines:

do not work, you can uncomment them and, if necessary, correct them to your values. My wlp0s20f0u2 interface already has txpower set to 30.00 dBm. If you also set up increased power for your device and after starting bettercap the power drops, then look at the initial value of regulatory domain at which the txpower is normal:

And write as wifi.region. For more on the topic of power, see the article “How to increase TX-Power of Wi-Fi adapters in Kali Linux”.

sets the loop to repeat commands every 20 seconds.

And the command set for the loop is described by this line:

That is, wifi.show – shows a generalized table with the collected information. Then the wifi.assoc all command is launched to initiate a connection to all APs and collect PMKID from all access points. Then sleep 7 sets a pause of 7 seconds – I DO NOT know if a pause is really needed and how long it should take, try different timings. Then comes the wifi.deauth all command, which deauthenticates all clients – the remaining 13 seconds from a 20 second cycle are allocated to this command.

In this case, the collection of information about the AP and listening to handshakes are performed continuously.

You can try different timings and choose what will show the best results, especially when moving – share your observations in the comments! Although, it seems to me, everything is individual here – it depends on the density of Wi-Fi access points and speed of movement.

By the way, since all the collected data is dumped into one single file, you will first have to carefully study the article “How to extract all handshakes from a capture file with several handshakes” and, secondly, extract the handshakes you need almost manually, as described in that article.

For cracking the PMKID hash, see all articles on the pmkid tag. 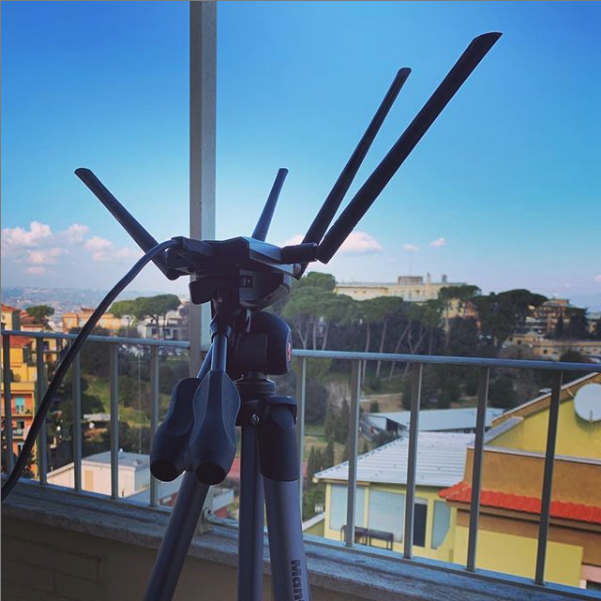