How to intercept SSH password. Man-in-the-middle attack on SSH

The SSH protocol allows you to connect to another computer to execute commands on it and transfer files. SSH uses strong encryption, so the transmitted network traffic cannot be decrypted or modified.

In SSH, you can use two methods to log in the remote computer:

If a password is used to authenticate, you can imagine the following attack scenario:

SSH MITM does exactly what is described above.

In its operation, SSH MITM uses the following tools (make sure that they are installed on your system):

There are two ways to redirect traffic for this attack on the local network:

DNS spoofing can be performed during a man-in-the-middle attack, or using a Rogue DNS server (in this case, the IP address of the Rogue DNS server will need to be set in the router or on the victim’s computer.

How to install SSH MITM

As an attacking machine, I will use Kali Linux. There are already programs tshark, ettercap, arpspoof, nmap and iptables. Therefore, we install the remaining dependencies and SSH MITM as follows:

Pay attention to the export LANG=en_US.utf-8 line – if you have operating system in English, you can skip this line. It is needed because the source code for SSH will be downloaded and its authenticity will be verified using GPG. But the fact is that GPG displays messages in the system language, and the check in the install.sh installation script is performed only for English. In general, if you do not execute this command, then the installation will not be completed due to the fact that the installation script will always stumble over the verification of the signature.

Also, closer to the end of the installation, the program will write: 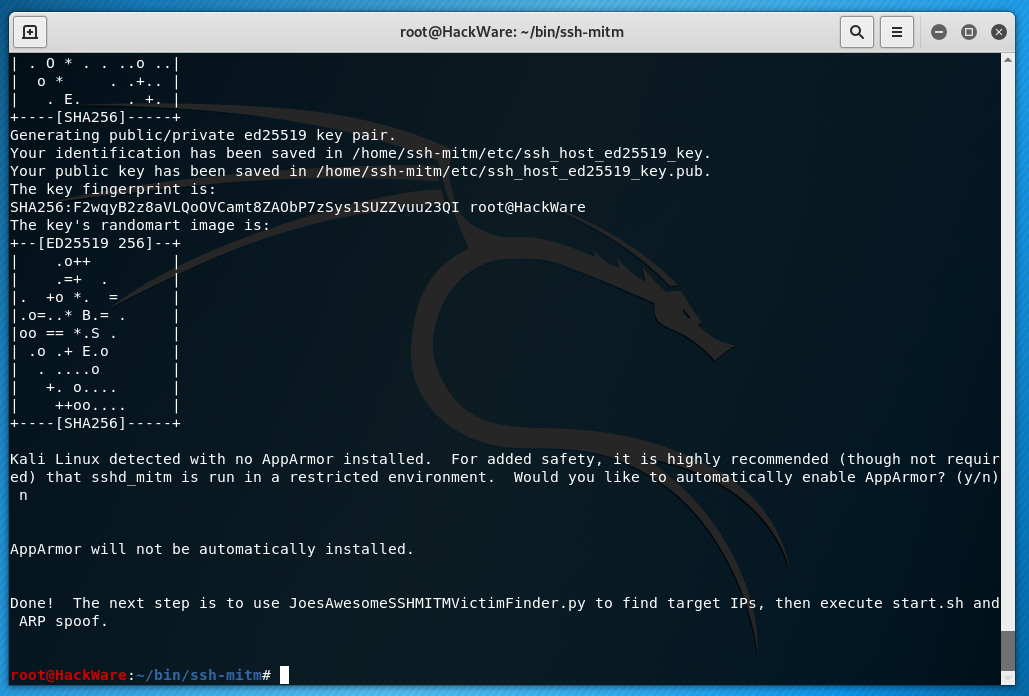 Search for SSH connections on the local network

A script JoesAwesomeSSHMITMVictimFinder.py is provided with the program, it makes finding targets on the local network very simple. It performs an ARP attack, spoofing IP blocks for a short time and sniffs traffic in search of SSH connections. IP addresses are not attacked simultaneously, but in small blocks – all blocks are processed sequentially, when the script reaches the last, then everything starts all over again. It will report all outgoing SSH connections from devices on the local network.

Nevertheless, there is a way to detect an SSH connection while it is connecting, since at the time of connection, fairly characteristic data is exchanged (which can reveal SSH) in plain text.

JoesAwesomeSSHMITMVictimFinder.py has another drawback – the program cannot recognize connections to the SSH server by IPv6 address, for example:

Tshark filters can work with IPv6 traffic, but script filters are not configured to recognize IPv6 addresses, so if the connection is made to standard 22 port, but using IPv6 protocol, the script will output something like the following:

Without leaving JoesAwesomeSSHMITMVictimFinder.py, you can run tcpdump:

As you can see, data is being exchanged with a remote server on port 22.

So that hosts and ports are not converted names, but displayed in their numerical value, add the -n option:

By the way, I started ARP spoofing only in relation to the IP protocol, and IPv6 traffic also began to pass through the attacker's machine – it will be necessary to study this issue in more detail, but for now we will not dwell on this.

Since JoesAwesomeSSHMITMVictimFinder.py is very convenient for running spoofing and searching for the most common SSH connection options, you can run it, but at the same time capture and analyze traffic using tcpdump or Wireshark.

Analysis of the captured data can be performed without stopping the capture of network packets.

To detect SSH connections that are made to the standard port, run the command:

To search for connections on a non-standard port, you can use something like this command (the string “@openssh.com” is searched):

If something is found, then for convenience you can continue in Wireshark using the following display filter

This filter will find the beginning of an SSH session – namely, frames in which the client and server exchange data in plain text.

By default, JoesAwesomeSSHMITMVictimFinder.py will perform ARP spoofing and sniff only 5 IP addresses at a time for 20 seconds before moving on to the next block of 5 addresses. These parameters can be configured based on the following compromise: the more IP is spoofed (attacked) at a time, the higher the chance that you will catch an outgoing SSH connection, but the load will also increase on your network interface, which is rarely suitable for such intensive work on home computers. Under too much load, your interface will start dropping frames, which will lead to denial-of-service (network problems) and greatly increase suspicion (which is bad). This default value should in most cases not lead to problems, although it will lead to a longer search for targets. For networks with low load, the block size can be safely increased.

Run a script to detect targets (devices from which an SSH connection is performed):

We ran the script on the eth0 interface and specified all 255 IP addresses of the local network as a block. The script has other options, for example, you can specify IP addresses for exclusion.

The script will output:

If SSH connections are found, the program will write: 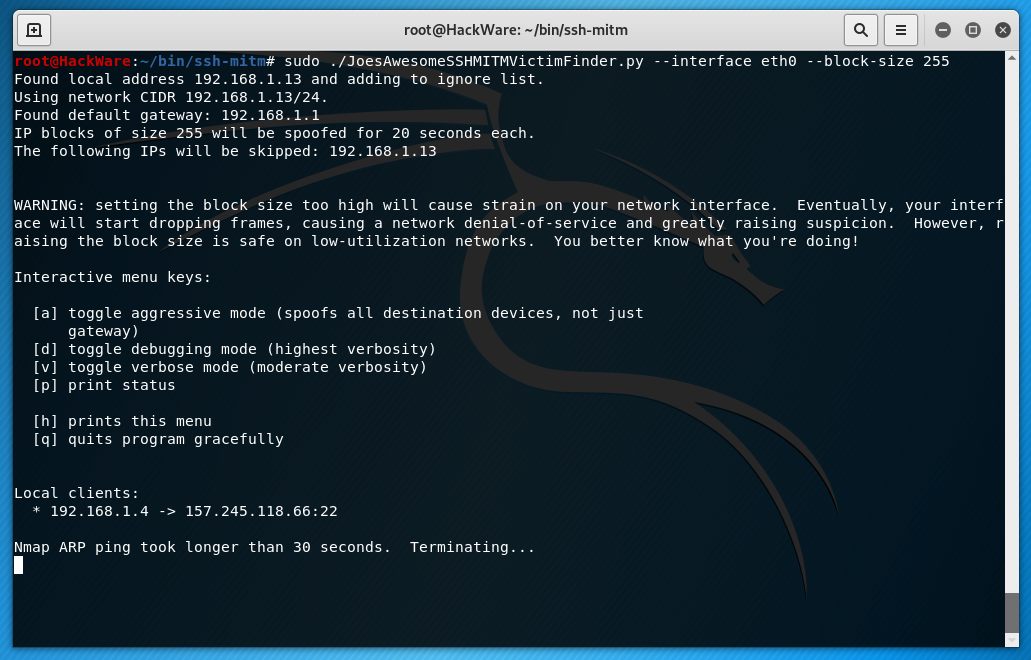 Upon exit, the program will summarize the findings:

In this information, we are primarily interested in the client address (192.168.1.4), and not the server. It is with respect to this client that we will again carry out an ARP spoofing attack and try to intercept the SSH session.

After you have completed the initial installation and found a list of potential victims (see above), execute the start.sh script from root:

Alternatively, you can use the ettercap tool:

If you are not familiar with these programs, then refer to the article:

You cannot intercept an already established SSH connection – you can intercept only the session started during an attack. That is, you need to wait for a new connection from the client. If you want to rush things, then forcibly close the SSH connection, you can use the tcpkill command:

Now we return to the victim’s computer and try again to log into the server via SSH. The SSH protocol has built-in protection against the attack scenario being implemented – it saves a server fingerprint and, if the fingerprint changes, it displays the following warning: 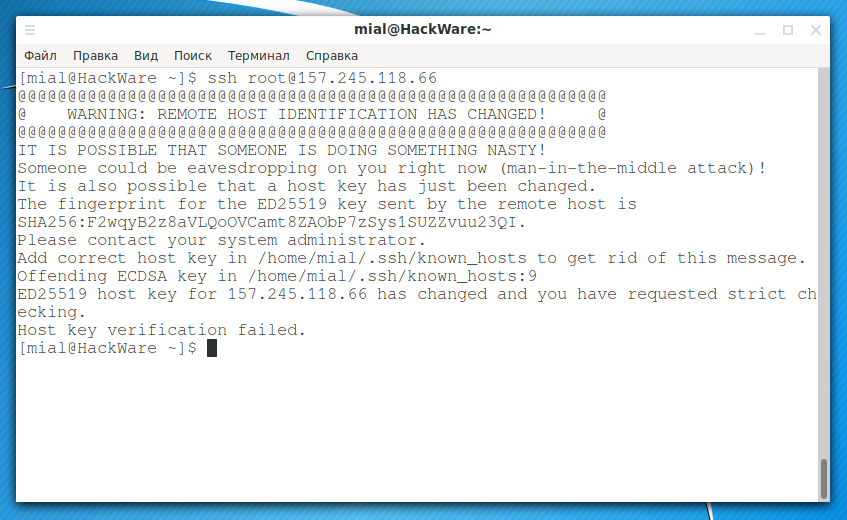 This terrible warning says that perhaps a man-in-the-middle attack is being carried out against us; and it is possible that the host key just changed – it is not known, in general. The fact is that the connection will not be made automatically. You need to open the ~/.ssh/known_host file and either enter a new fingerprint or delete the entry for this server and then add a new fingerprint when initializing the connection:

In general, connecting and executing commands go as usual, I did not notice any delays or other oddities: 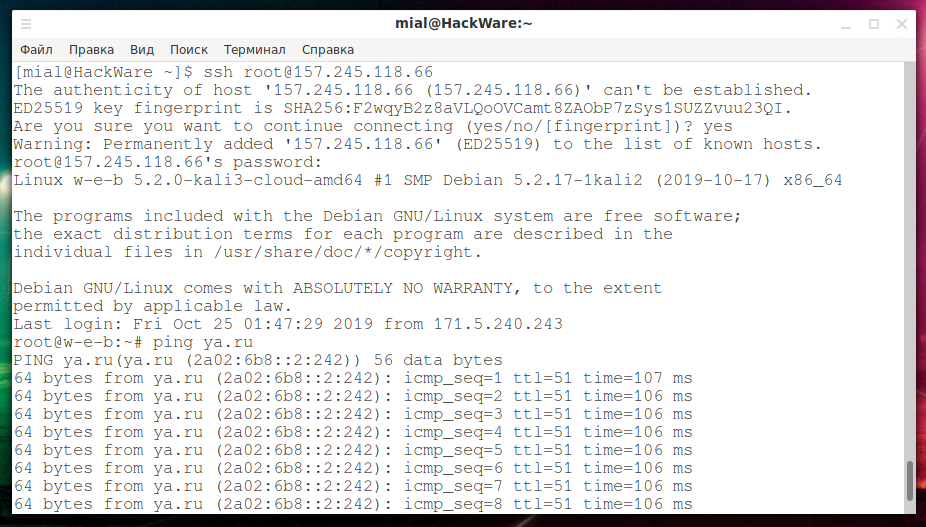 The authors of the program say that in case of a successful attack, the password will appear in the auth.log file:

If successful, the /var/log/auth.log file will have the following lines in which the password is written:

There are too many extraneous entries in the /var/log/auth.log file, so I did not find what I needed – it turned out to be easier to look elsewhere.

Each new session will have its own number, the very first session will be placed in the file /home/ssh-mitm/shell_session_0.txt: 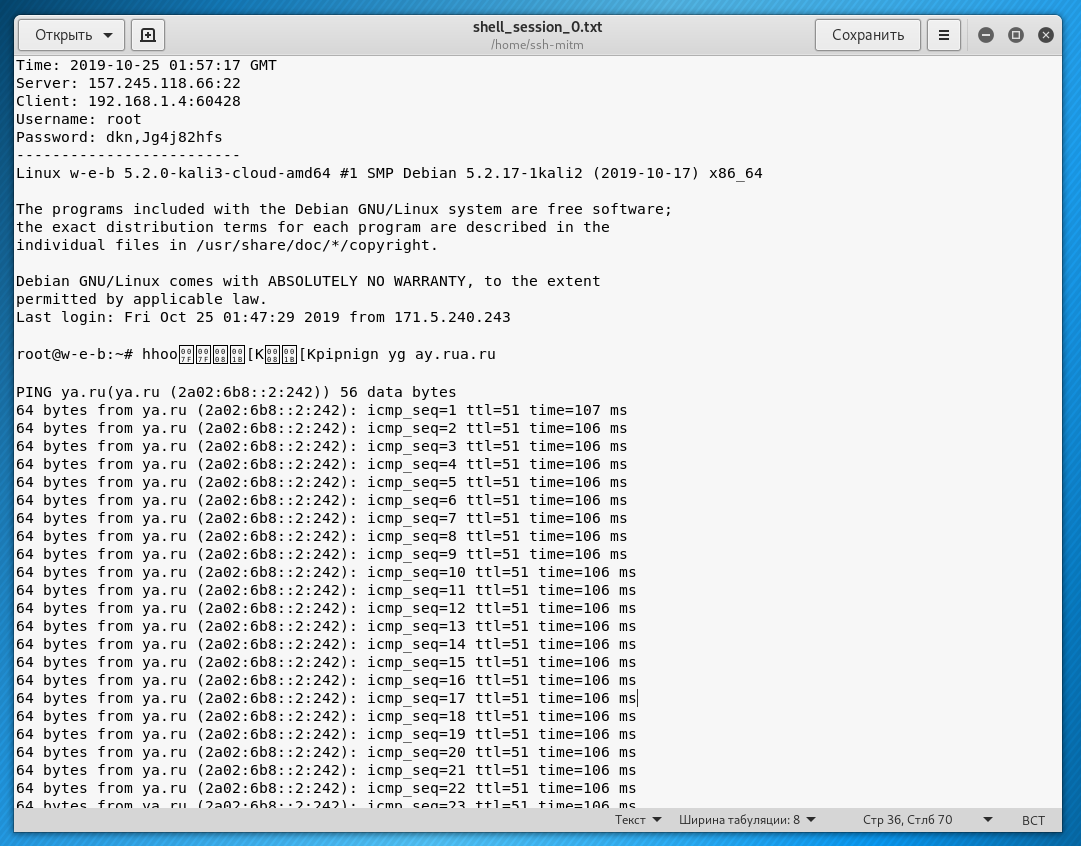 Please note that the username and password are written at the top. 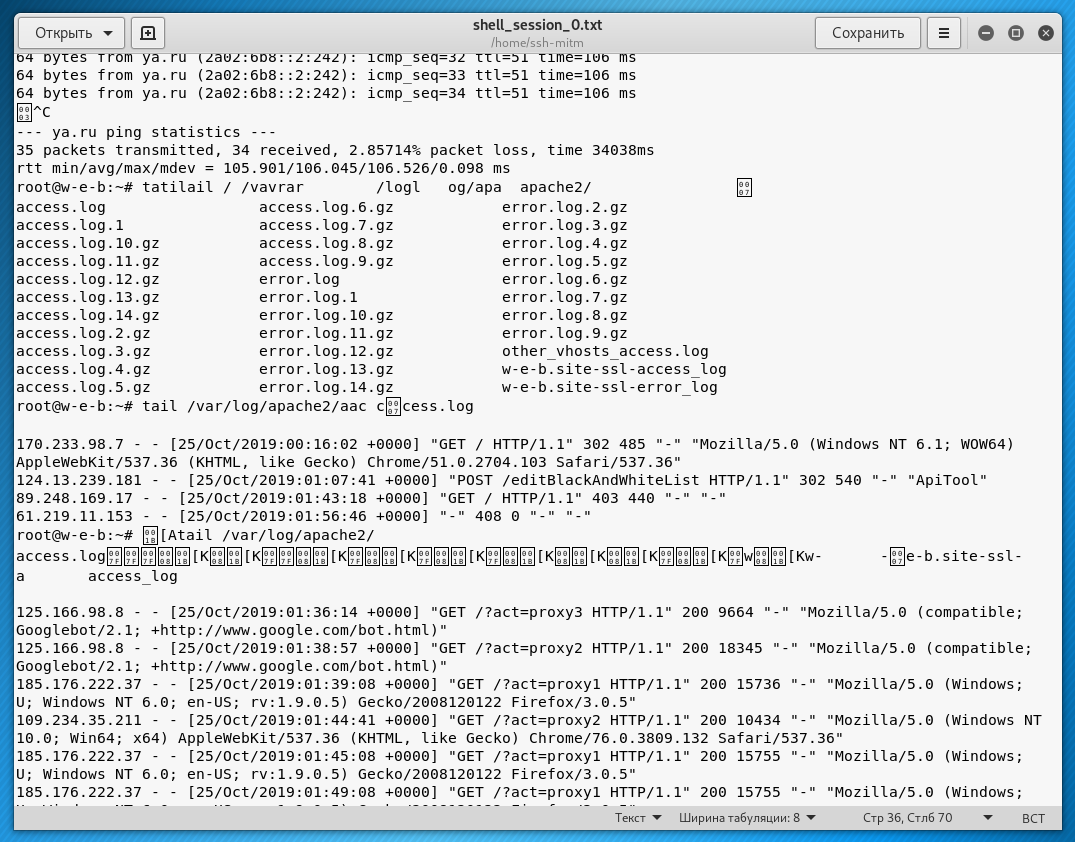 The SSH session of the victim itself is also recorded in full. 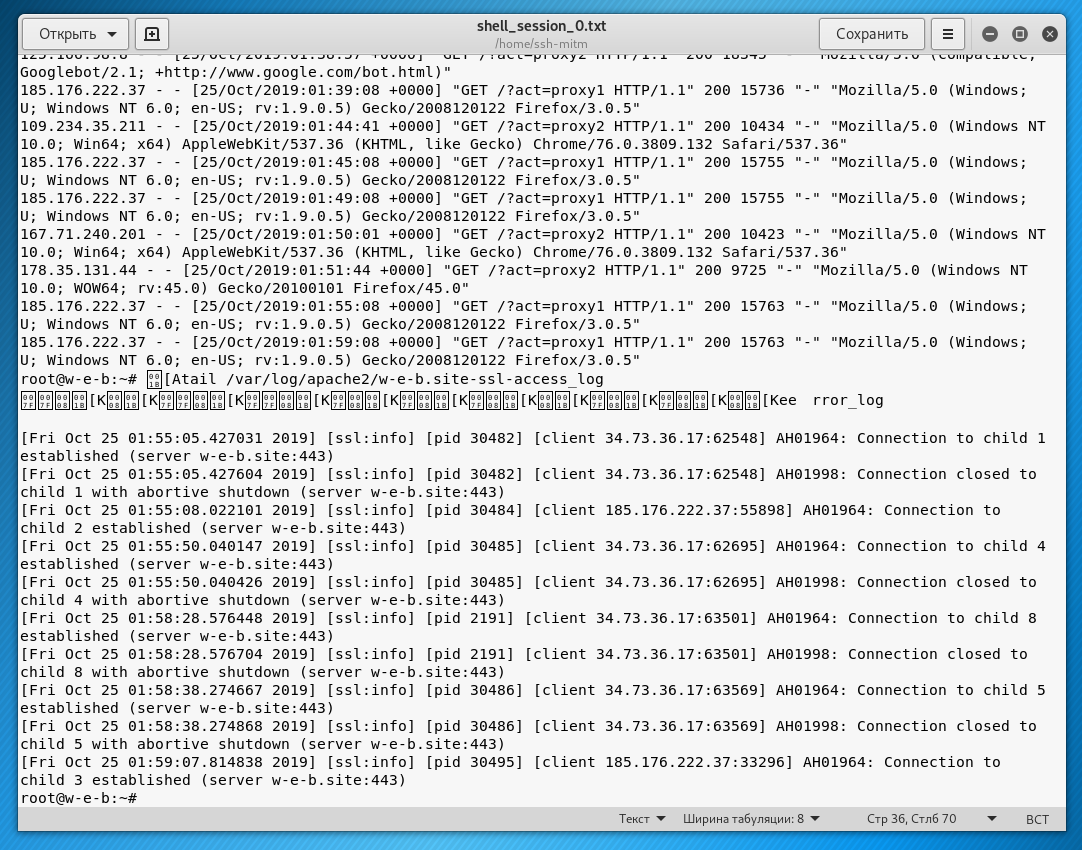 Special characters, such as tabs, may be unreadable.

If the user entered passwords in programs that do not show passwords, then such lines will be captured normally, without duplicate characters, since the remote server does not repeat them.

The article above shows how to identify SSH connections on a non-standard port. But what if a connection is detected?

Open the start.sh file and find the line there:

Instead of 22, you can enter the port on which the remote SSH server is running.

Unable to complete installation due to incorrect gpg key signature

During installation, you may encounter the following messages: 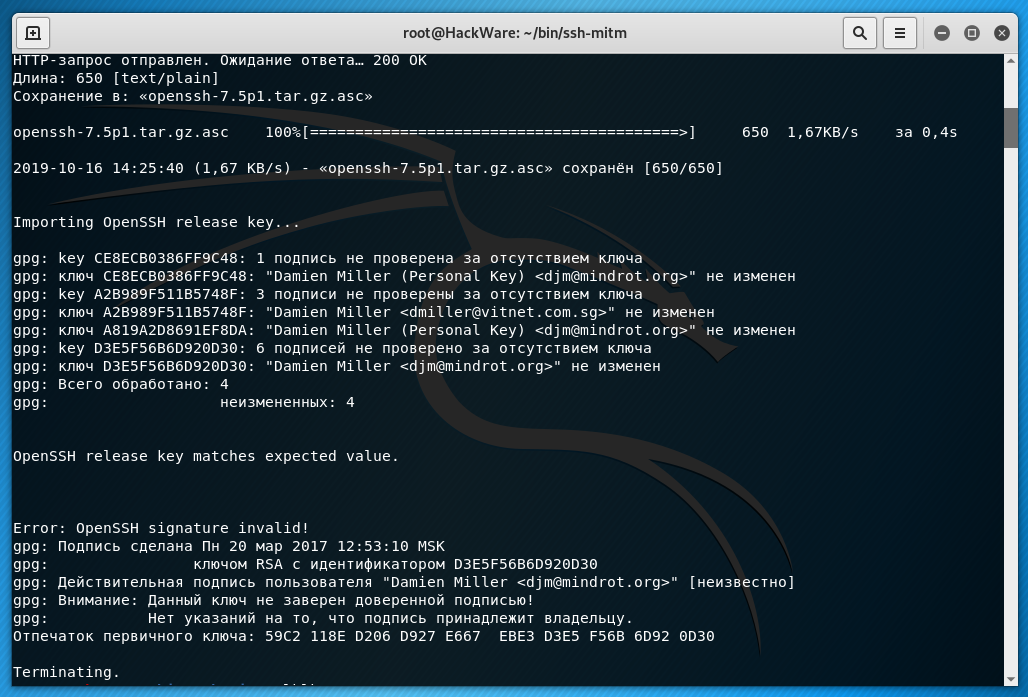 The easiest way to fix this situation is to temporarily change the locale to English, after which you can run the installation script:

SFTP sessions are also successfully captured and saved. Even transferred files are saved.

This function is not implemented and is unlikely to be ever implemented due to the reliability of public key authentication in SSH.