Introduction to IPv6 Addresses: How to Use and How to Explore the Network (Part 1)

Can routers and computers work simultaneously with IP and IPv6?

IPv6 is the new version of IP. IPv6 networks, IPv6-enabled hardware and software are already fairly widespread – at least in some countries.

When analyzing the network, for example, using Wireshark or tcpdump, you can skip half or even more traffic if you forget about IPv6! That is, as a filter for displaying packets in Wireshark, you will enter (a regular filter to display IP protocol traffic): 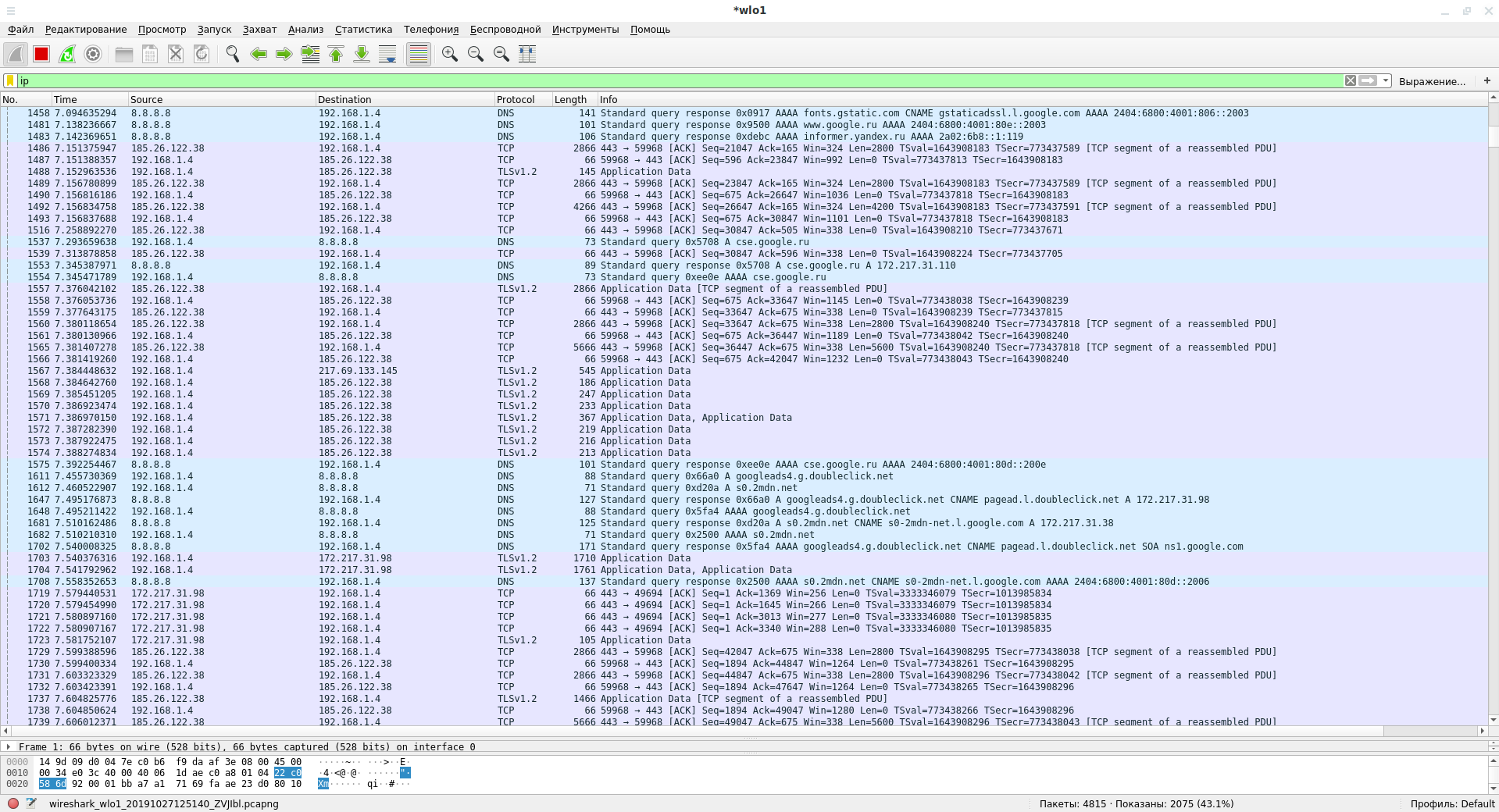 But if you enter such a filter

That picture will change dramatically (I pay attention that this is the same traffic), it turns out that the computer is also connected to completely different hosts: 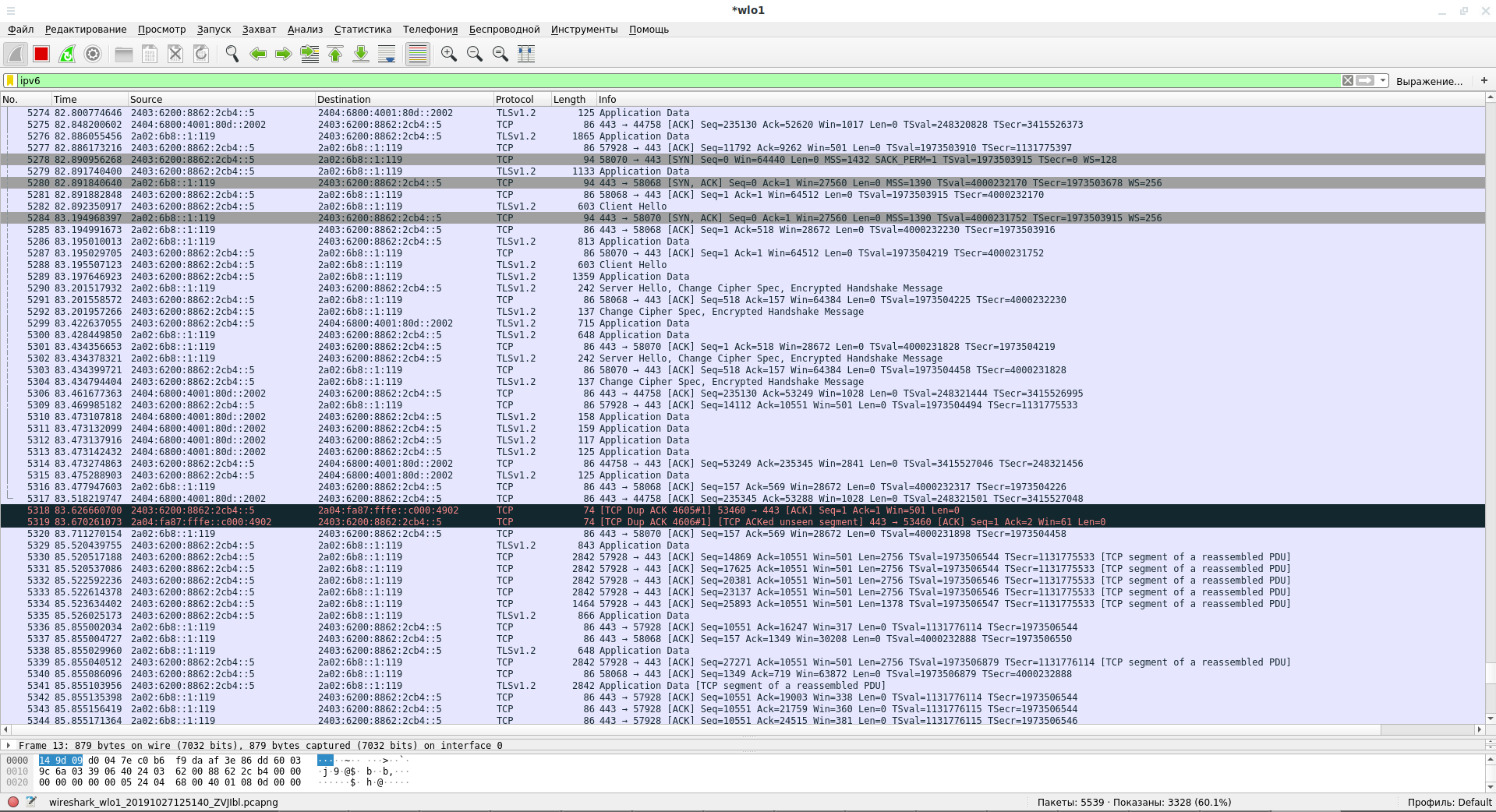 When analyzing the network, when configuring IP display filters, when performing attacks (for example, ARP and DNS spoofing on the local network), you need to remember about IPv6!

Once again: IP and IPv6 are two parallel networks that are not particularly connected to each other (although the same equipment can support both protocols). As a result, when setting up a network, for example, a firewall, you need to make settings for the IP protocol separately, and then do the same IPv6 settings. Since these are different networks, there is a chance that the system administrator has configured them differently, which provides loopholes for attack or bypass of restrictions using IPv6.

IPv6 addresses can be useful when researching the local networks of Internet service providers, it is worth trying to use IPv6 to bypass the Captive Portal and other network restrictions, you should remember about IPv6 when analyzing traffic on your computer and in local networks, or vice versa to increase the secrecy of your presence (in the hope that IPv6 is not mentioned in the traffic logging settings or that IPv6 geolocation is still in its infancy (at least in public databases)).

This article will help you take the first steps in using IPv6 addresses with popular programs.

The following are examples of valid IPv6 addresses:

They are, to put it mildly, different. Let's see how this is possible.

IPv6 addresses are displayed in full form as eight four-digit hexadecimal numbers (that is, eight groups of four characters), separated by a colon. Example address:

Hexadecimal numbers are written using numbers from 0 to 9 and with letters from a to f.

By the way, because IP addresses also support shorthand, for example, the following command will work just fine:

For IP addresses, groups of numbers are called octets (which means “eight” in some language) since each digit in the address contains eight bits of information, there are four octets in total for IP, that is, 32 bits are used for the address. By the way, that is why the number in each octet is limited to 255 – this corresponds to the amount of information that 8 bits can store, this is 28, that is, numbers from 0 to 255.

If the number in the group is 0 (that is, four zeros), then one zero is written.

An example of using these rules:

Let's go back to the addresses from the examples above:

Several sections with consecutive zeros are missing here. How much exactly? This can be found on the basis of the following rule: there should be 8 sections in total, and there are only 4 sections, which means that 4 sections are missing, that is, in full form the number should look like this:

There are 5 segments in this address, and it should be 8, so 3 is missing, the address record is in full:

Or along with all zeros:

There are 6 segments in this address, and there should be 8, therefore, a complete record of this address:

This address has 8 segments and there are no two colons in a row – therefore, this is a complete record of the address, except that the leading zeros are omitted:

Hopefully these simple exercises have helped you keep an eye on and learn how to recognize IPv6 addresses.

It is sometimes impossible to find out your external IP address without third-party services, since quite often clients of Internet service providers access the global network via several NATs. Therefore, you have to go to the ‘Show my IP’ services and web sites – these services look at which IP address the request came from and show it to you. But most likely, this is not exactly “your” IP address, since computers and phones in your local network have only local IP addresses, your router also has some local IP belonging to the network of the Internet service provider, and the IP that shows you on web sites, in fact, assigned to some kind of network device from the ISP through which you access the external network simultaneously with many other users.

With IPv6 addresses, in this sense it is simpler - there are so many of them that there is no need for NAT – it is possible to give each client a personal IPv6 address.

But here another difficulty arises. Let's take a look together. On Windows, to display your IP and IPv6 addresses on the command line, run the command: 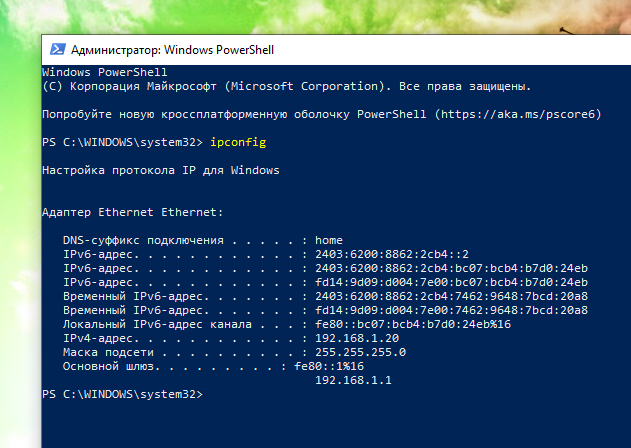 In Linux, to view your IP and IPv6 addresses, use the command:

Here IPv6 addresses along with subnet masks are listed in the lines:

We will look at the reserved ranges of IPv6 addresses a little later, looking ahead, I can say that global addresses can currently start only at 2 or 3 (others just haven’t been distributed yet). But even with this criterion, in the examples above, each operating system has two addresses that start with twos – which one is your external IPv6?

The easiest option is to check again using an external service, but you need to understand that if the site you are visiting to find out your IP address is not configured to work with IPv6, then it will only show your IP, but it will not be able to show your IPv6. The service on SuIP.biz and w-e-b.site have IPv6 support and will show your IPv6 address if your Internet service provider and your equipment (computer and router) support IPv6.

To find out if you have support and your IPv6 address, go to the page: https://w-e-b.site/?act=myip 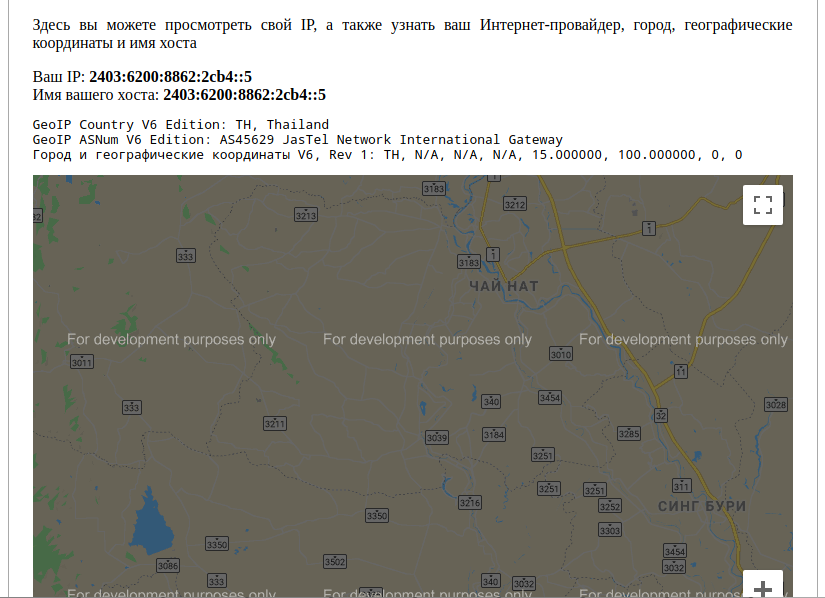 If you have IPv6, then it will be shown. If IPv6 is not supported, only your IP will be displayed.

In this section, we will consider ranges of IPv6 addresses for the intended purpose, so that we can immediately filter them out of the many IPv6 addresses of network interfaces.

As can be seen from the table, addresses that begin with zeros or with f are local or are intended for specific purposes.

This means that only IPv6 addresses that start with “2” or “3” are global now.

A single network interface can have many IPv6 addresses, by default, on Linux I have a maximum of 16:

Why is there so much IPv6 for one interface? Each IPv6 interface has a local IP address. If the interface can also exchange data with a larger network (for example, via the Internet), it also has a global address. These are at least two addresses. And if the host is behind a multihomed Internet connection, it probably has even more addresses.

In general, one computer can have many IPv6s – and that's the norm. Global addresses are those that start in two or three.

How to find out IPv6 site address

In Windows IPv6, the site address can be found with the nslookup command: 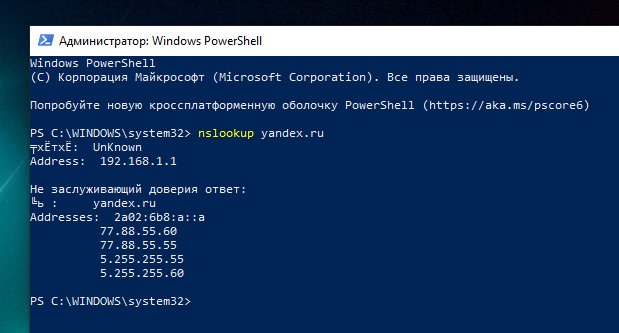 If the site has an IPv6 address, then it will be displayed along with the IP addresses.

On Linux, you can also use the nslookup command: 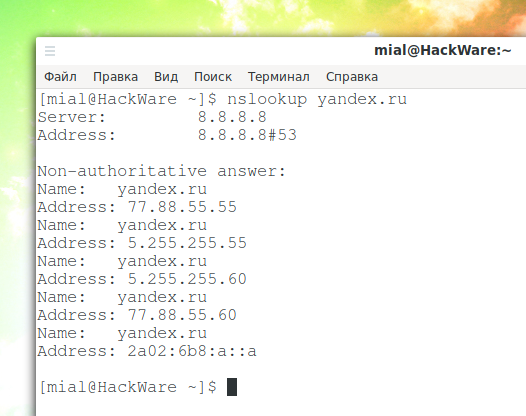 You can use the host command:

The dig command can also show IPv6 addresses, but by default it displays data only for an A record, so you need to specify the type of record explicitly:

Or configure the output of all DNS records for this domain:

If you don’t feel like messing with command line utilities, you can use online services that will show you all the IP and IPv6 addresses of any site: https://w-e-b.site/?act=dig

Now that we have learned how to look and recognize IPv6 addresses, let's learn how to use them in various applications and utilities.

Continuation of “Introduction to IPv6 Addresses: How to Use and How to Explore the Network (Part 2)”