Introduction to IPv6 Addresses: How to Use and How to Explore the Network (Part 2)

It is recommended to start acquaintance with the first part: https://miloserdov.org/?p=3727

How to open IPv6 in a web browser 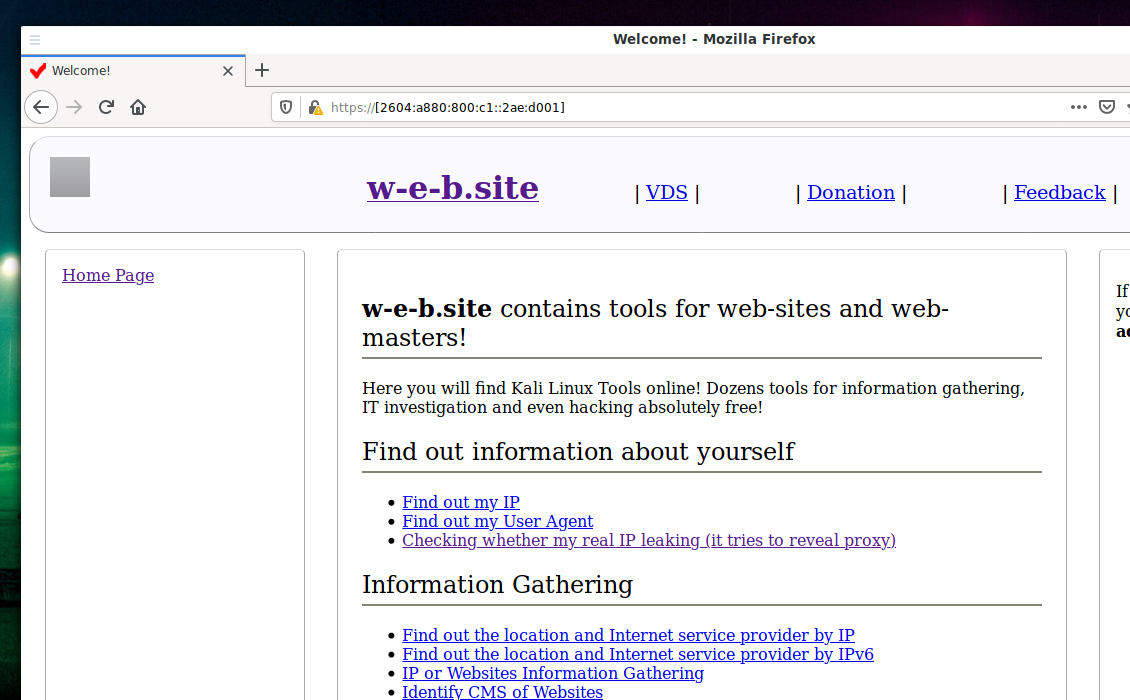 How to open IPv6 in cURL

To open IPv6 in cURL, the address must be placed in square brackets, examples of commands:

How to ping IPv6 addresses

The ping program can work with IPv6 addresses. It is enough to specify the address, and it does not need to be placed in square brackets: 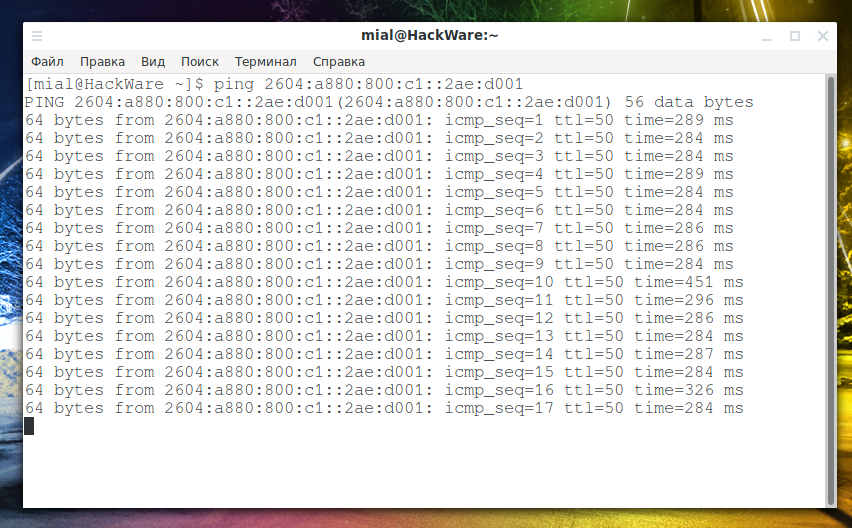 How to find out which organization IPv6 address belongs to. WHOIS IPv6 Addresses

The whois program supports IPv6 addresses and you can use it to get information such as:

Using whois to get information about IPv6 is very simple – just specify the address (putting it in square brackets is not required):

How to look at the ARP table in IPv6. Show neighbors in IPv6

To view the MAC addresses of devices in the local IPv6 network, run the command:

How to traceroute IPv6

To perform IPv6 traceroute, it is necessary that the computer from which you are tracerouting the IPv6 network, as well as the target host, have IPv6 addresses, that is, that they are connected to the IPv6 network.

To traceroutetraceroute, specify the IPv6 address of the remote host:

For best results, it is recommended to try different methods of tracerouting, see the article ‘Trace route tools and methods’ for details.

The traceroute program looks for hostnames for IP addresses, but for IPv6 addresses it is usually not possible to find hostnames, so the program simply duplicates the same addresses, which clutters the output and makes it hard to read. To prevent this from happening, as well as to significantly speed up the tracing process, it is recommended to use the -n option:

As a remote site, you can specify the site name. If you want tracerouting to IPv6 of this site, specify the -6 option, for example:

How to configure your system to work with DNS over IPv6

Even if your computer is connected to an IPv6 network, then most likely the fourth version of IP is listed as the DNS server. If you want DNS queries also to be made using IPv6, then in addition to the existing records, add the IPv6 addresses of DNS servers.

For Google DNS, these are the addresses:

You can check if DNS responses over IPv6 are coming normally: 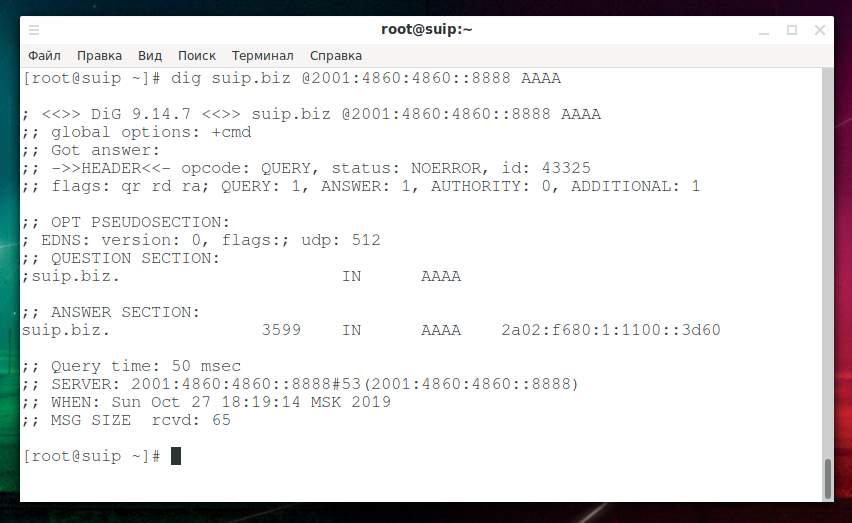 If everything is fine, then on Linux, to enable DNS via IPv6 at the beginning of the /etc/resolv.conf file: 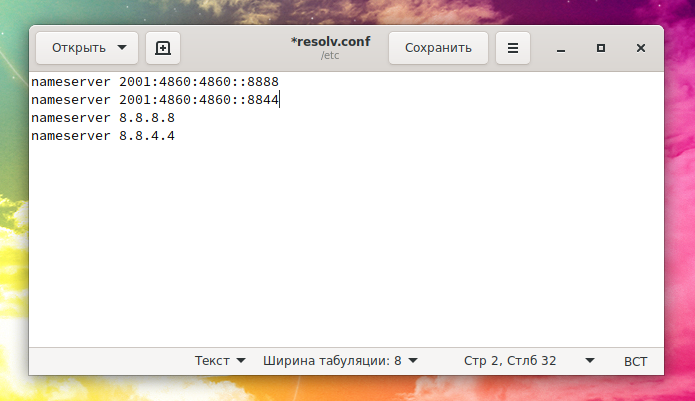 After that, DNS queries will be sent via the IPv6 protocol. 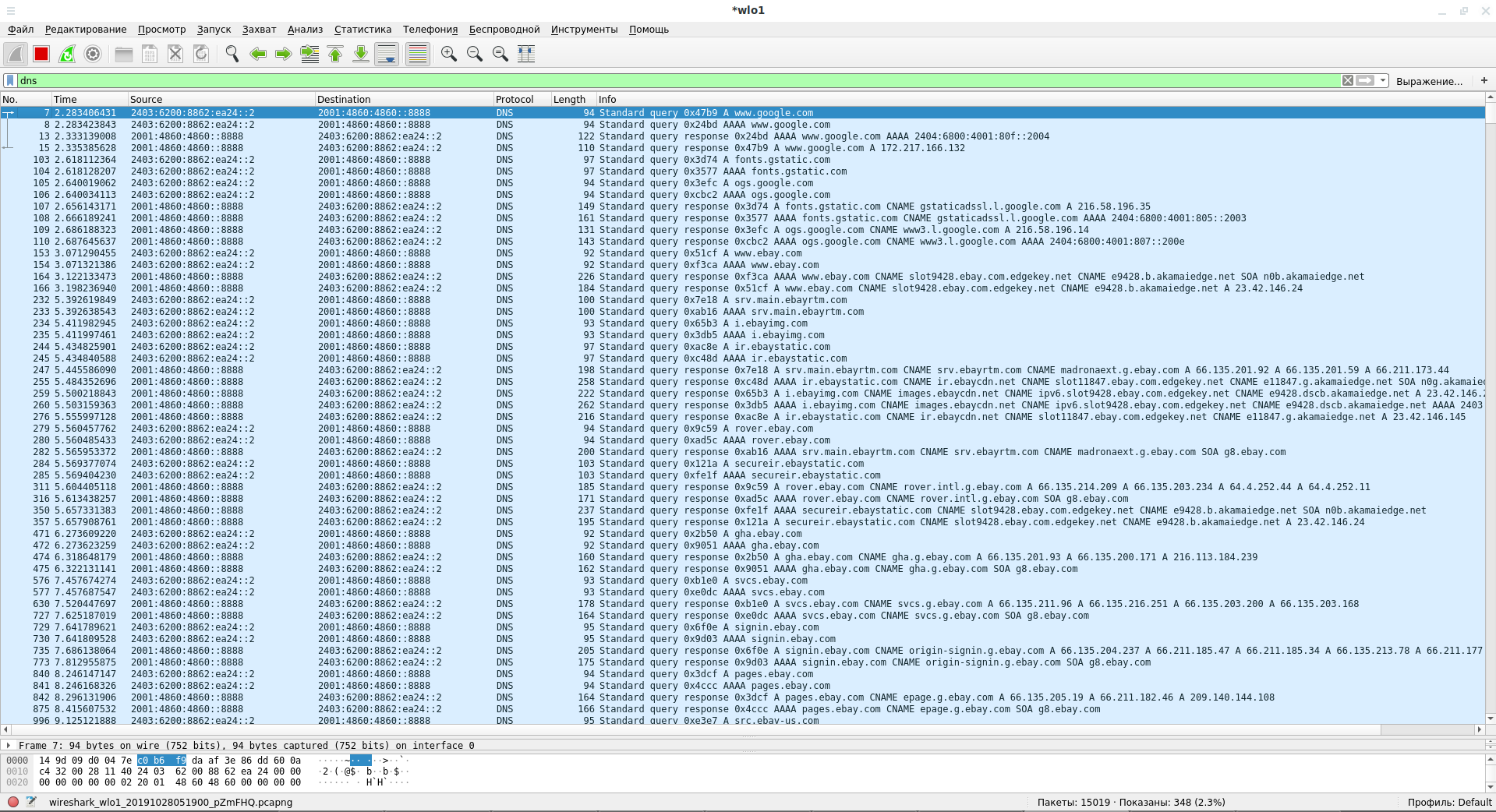 In addition to being “trendy and modern”, IPv6 has built-in IPsec support:

IPsec (short for IP Security) is a set of protocols for securing data transmitted over the IP Internet Protocol. Allows authentication, integrity checking and/or encryption of IP packets. IPsec also includes protocols for secure key exchange on the Internet. It is mainly used for organizing VPN connections .

Security in IPv6 is implemented using IPsec, which is required for this version of the protocol. Unlike SSL and TLS, IPsec will allow you to encrypt any data (including UDP) without the need for any support from the application software. And DNS queries (by default) are transmitted using the UDP protocol. That is, in theory, the transition from IP to IPv6 should improve security for DNS queries.

How to calculate how many IPv6 addresses in a subnet

Before moving on to examples of scanning IPv6 subnets, let's learn how to calculate how many IPv6 addresses are in a given IPv6 range.

This is not without meaning, we turn to the quote from Wikipedia:

“It is sometimes claimed that a new protocol can provide up to 5 · 10 28 addresses for every inhabitant of the Earth. Such a large address space was introduced for the sake of hierarchical addresses (this simplifies routing). However, an increased address space will make NAT optional. The classic use of IPv6 (over a /64 network per client; only unicast addressing is used) will make it possible to use more than 300 million IP addresses per inhabitant of the Earth”.

By the way, it's pretty easy to calculate how many IPv6 addresses are in total:

This is an unrealistically many!

You can calculate the number of IPv6 in a subnet using the formula:

I don’t know what this number is, but it’s definitely a lot of addresses. It’s pointless to start scanning such networks – scanning will never end.

How to scan IPv6 and IPv6 ranges

Nmap supports IPv6 addresses and can scan IPv6 ranges, although there are some limitations: not all types of notations that are available for regular IPs are supported. 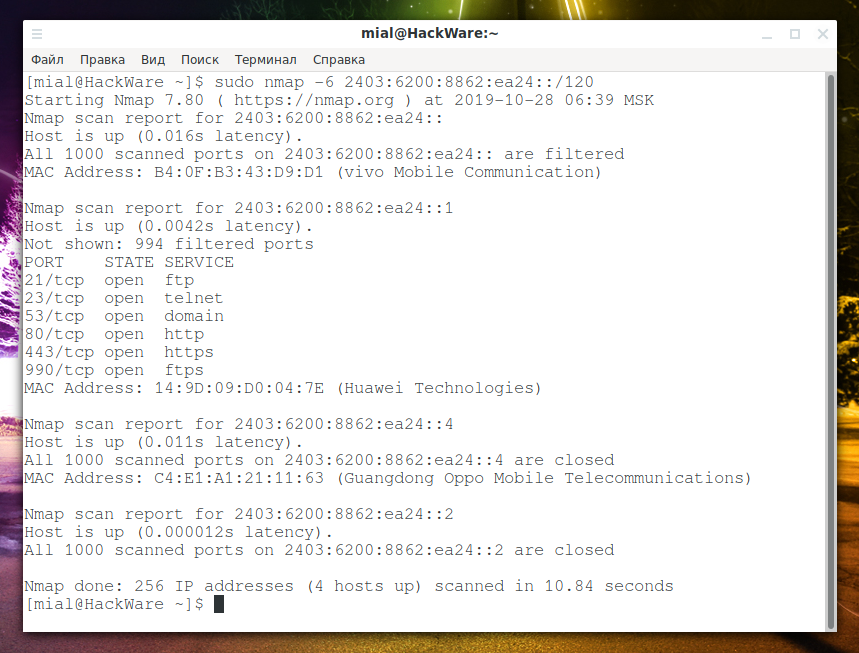 In fact, if you dig a little deeper and take a closer look at IPv6, we will find out that very large subnets are allocated to clients, and so many addresses are needed due to the nature of IPv6 routing. It may turn out that the clients are gathered at the beginning of large ranges and it makes no sense to scan the entire large range of IPv6 addresses entirely – it is enough to break the scan targets into the same subnets that the ISP allocates to clients and scan only the very beginning of each such range. As a result, the scan time should decrease dramatically. IMHO, there is room for optimization in scanning IPv6 networks, but this requires an understanding of the topology of a particular network and a deep understanding of IPv6 and its routing.

So, to scan IPv6 addresses or ranges, add the -6 option to the nmap scan command and specify:

Octet ranges for IPv6 are not yet supported.

Even if the IPv6 address is explicitly specified as the target, the -6 option must be specified, otherwise an error of the form:

All nmap options and capabilities are also supported for IPv6 addresses.

What is the difference between scanning IPv6 and IPv4? Do I need to additionally scan ports on IPv6?

IPv6 and IPv4 addresses of one remote host can be on the same network interface or on different ones. Even if both addresses are assigned to the same network interface, different ports can be opened for these addresses! For example, below I will show how to configure SSH to work only on the IPv6 protocol – in this case, if you restrict yourself to scanning the IPv4 protocol, then you will not even know about the existence of the SSH service on the target server! A similar statement is true for most other protocols and services, especially not intended for the general public: for example, a web server is unlikely to be configured to listen only to IPv6 address, since this restricts access to a large number of visitors, but “administrative” services to which it must only one person has access, or a small group of people, for example, SSH, Telnet, FTP, etc., may well be configured only to work on the IPv6 protocol.

To list IPv6 routes on Linux, run the command:

Or an abbreviated version of this command:

To show the default IPv6 route, run the command:

For more information about routes, see the article ‘Setting up network routes: the choice of connection used for the Internet; simultaneous use of multiple connections for different purposes’.

How to view IPv6 settings

The above shows how to find out your IPv6 address and IPv6 routes, but in addition to these settings, the system has many other IPv6 options for fine-tuning and enabling or disabling certain IPv6 functions.

To view the current IPv6 settings on Linux, run the command: 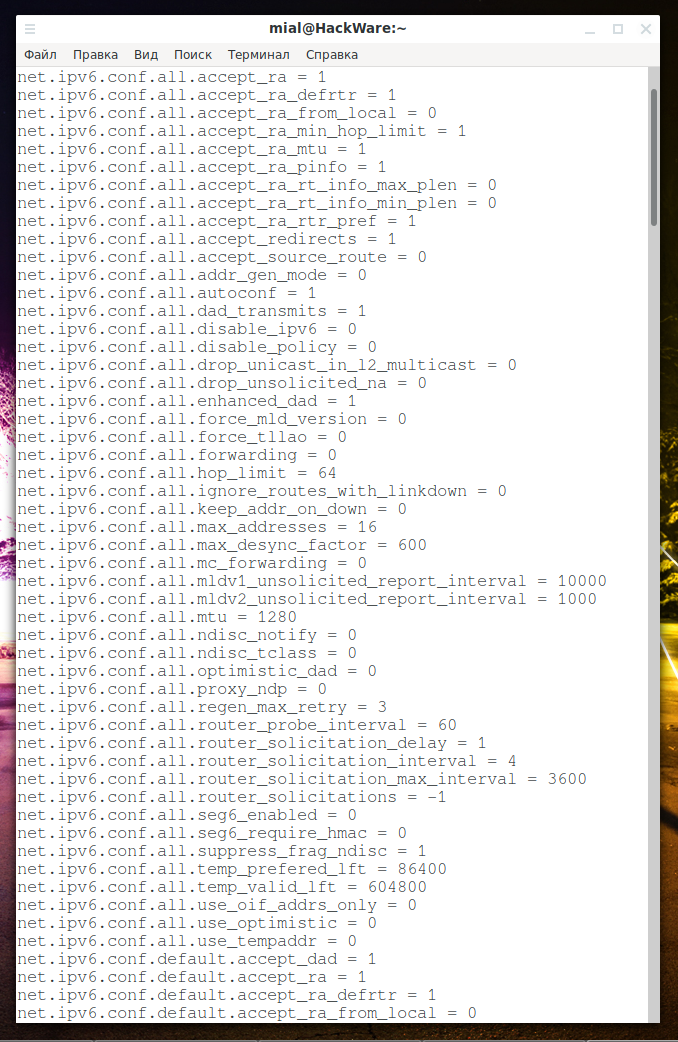 How to disable IPv6

To disable IPv6 on Linux, run the following commands:

Firewall configuration for the IPv6 protocol is performed by the ip6tables command.

Wireshark supports the IPv6 protocol and shows its packets by default. If you need to filter only IPv6 traffic, then use the display filter:

If you need only IP traffic, then use the filter:

Filtering ICMPv6 (Internet Control Message Protocol of the sixth version) in Wireshark is done by the filter:

How to filter ARP packets for IPv6 in Wireshark? For IPv6, ARP is not required, since its role is played by the Neighbor Discovery Protocol (NDP) using ICPM6.

To see packets that act as ARPs for IPv6, use a filter:

tcpdump supports the IPv6 protocol and shows its packets by default.

It is worth noting that filtering by IPv6 range, for example:

May result in messages of the form:

With other programs this problem usually does not occur, but tcpdump requires that the non-network bits are equal to zero. That is, the command with the following filter is correct for tcpdump:

When connecting to an SSH server, you can use the IPv6 address of the remote host, for example:

If you are connecting by the name of a host that has an IP and IPv6 address, then add the -6 option so that the IPv6 address is selected:

How to configure SSH to work with IPv6 only

The SSH server configuration is performed in the /etc/ssh/ sshd_config file.

The system can have several network interfaces with several IP addresses, by default sshd listens for them all, including IPv6 addresses:

If you remove the ListenAddress 0.0.0.0 entry, only IPv6 will be listened.

With the ListenAddress directive, you can also specify a specific IP that will be listened for while waiting for connections. And with the AddressFamily option you can choose to listen to all addresses, only IPv4 or only IPv6:

Why is it necessary to limit the listening addresses to IPv6 only?

Many automatic scanners by default only scan ports for IPv4 addresses, completely ignoring IPv6. There are still quite a lot of users, including hackers who do not have access to IPv6. If your ISP has IPv6 support, then switching to SSH with IPv6 protocol will significantly limit access to your SSH server for automatic scanners and drastically reduce the number of brute-force cracking attempts (password guessing).

How to connect to FTP on IPv6 in FileZilla

FileZilla supports IPv6 addresses that must be enclosed in square brackets.

The scheme with listening and connecting only over IPv6 should work, but this topic requires additional testing.

Classic ARP spoofing does not work for the IPv6 protocol because it uses a different protocol. However, there are similar attacks by Neighbor Advertisement Spoofing, Last Hop Router.

IPv4 and IPv6 are separate protocols, so attacking one does not directly affect the other. However, the methods for spoofing NA and ARP are very similar. If you have the opportunity to do one, you probably could do another.

Although Internet service providers support IPv6 not everywhere, you can easily rent VPS with IPv6. These VPS can be used over SSH or as a proxy for working with IPv6.

Examples of VPS with IPv6, where the system can be lifted with a few clicks: