How to use Hashcat to crack passwords containing non-Latin characters

If a password contains Russian, Chinese, Arabic characters or any other non-Latin (non-English) characters, then it can also be cracked in Hashcat, but it also requires an understanding how computers work with strings and encodings, especially when launching a mask attack.

We will consider two cases when the password contains non-Latin (in my example, Russian) letters:

I will crack the MD5 hash of the very short Russian word “нет”:

If you use echo to calculate the line hash, it is extremely important to specify the -n option, which prevents the addition of a newline character – otherwise each hash for the line will be incorrect! See also articles “Hash-generation software” and “How to identify hash types”.

This option is simpler than a mask attack – just make sure that the dictionary is in the same encoding as the cracked password was during the computing of the hash.

I got my hash in a terminal whose encoding is set to UTF-8, so my string was in UTF-8 encoding. 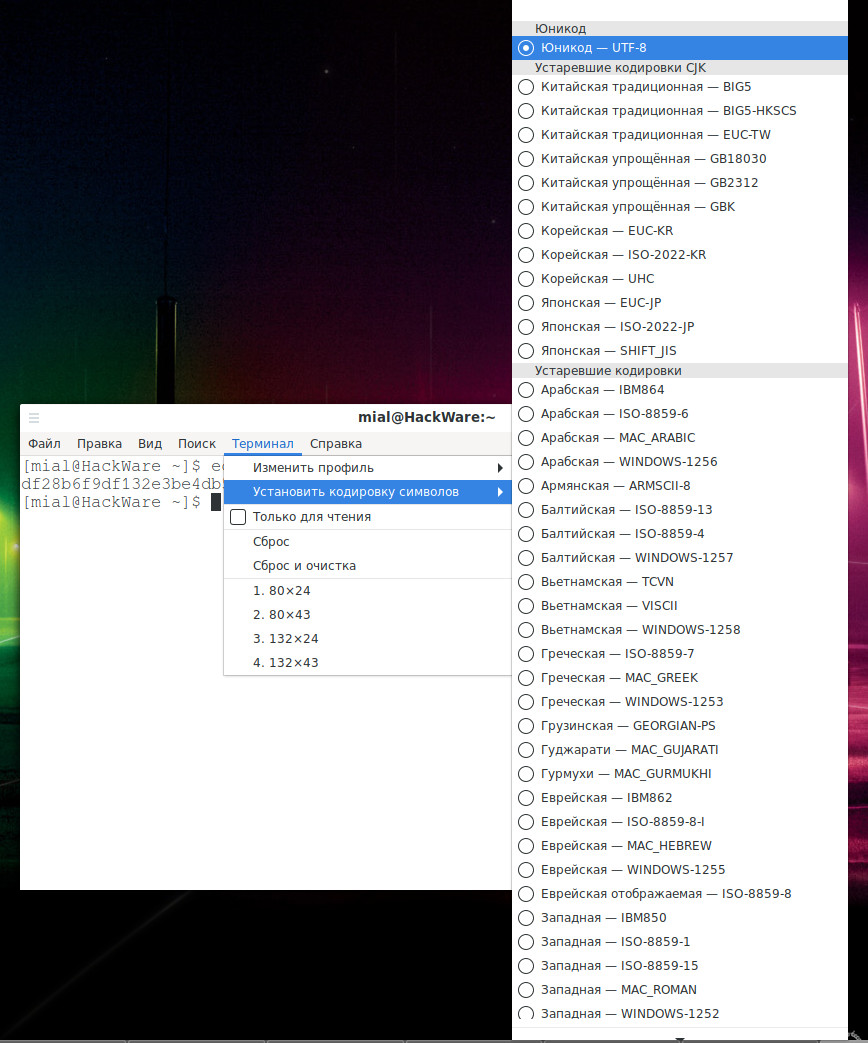 If the terminal were in a different encoding, for example, in Cyrillic WINDOWS-1251, then I would get a completely different hash. 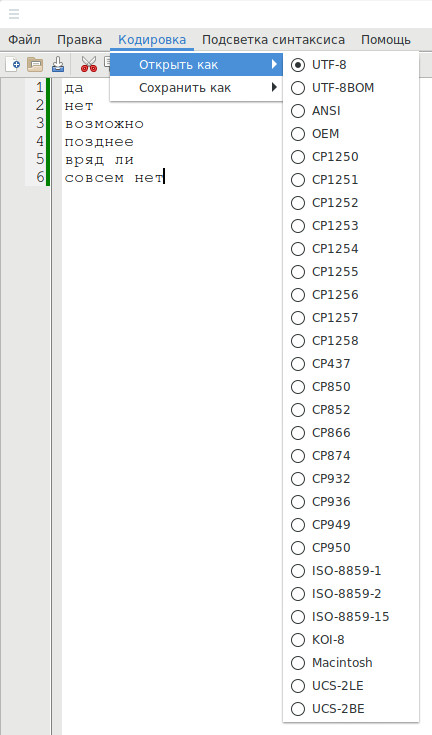 Now I run a dictionary attack: 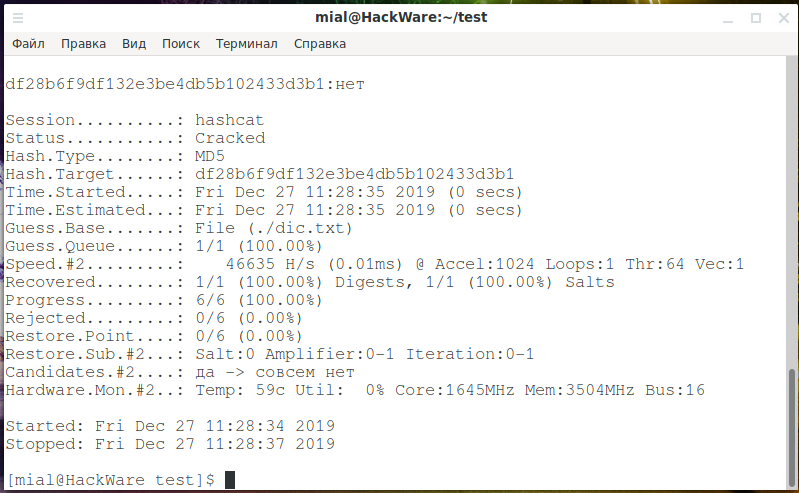 The password has been successfully cracked, this is indicated by the lines:

That is, dictionary attack is rather plain – the main idea is that the dictionary should be in the same encoding as the password during the hashing.

Since I am going to continue my experiments with the same hash, I delete the line from the file ~/.hashcat/hashcat.potfile

Otherwise, instead of launching a new brute force, Hashcat will verify that the hash has already been cracked and will not start enumerating passwords.

But now everything is a little more complicated. Intuitively, based on previous experience by mask attack, when the password contains only Latin characters and numbers, as well as characters from single-byte encoding (in other words, ASCII characters), you can compose the following command: 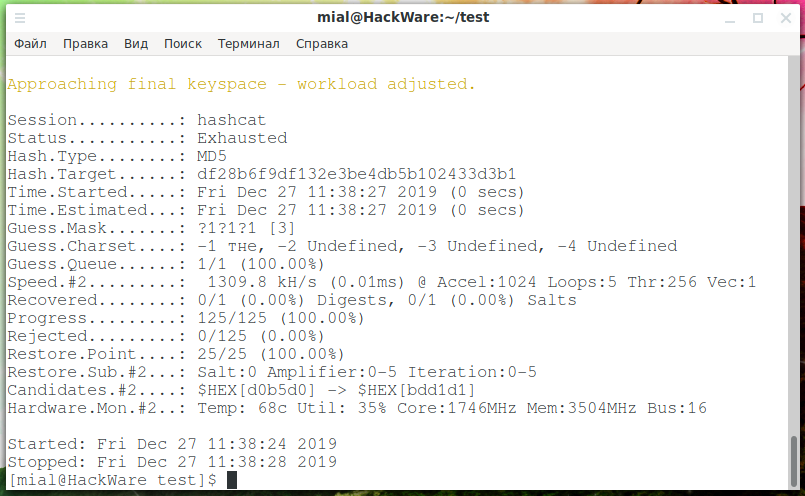 Password is NOT hacked. Pay attention to one interesting line:

To add even more mysticism, let's run the same command, but now instead of a mask of three characters, we’ll specify a mask of six characters (although we remember very well that we crack the hash of the word “no”, which has exactly three characters): 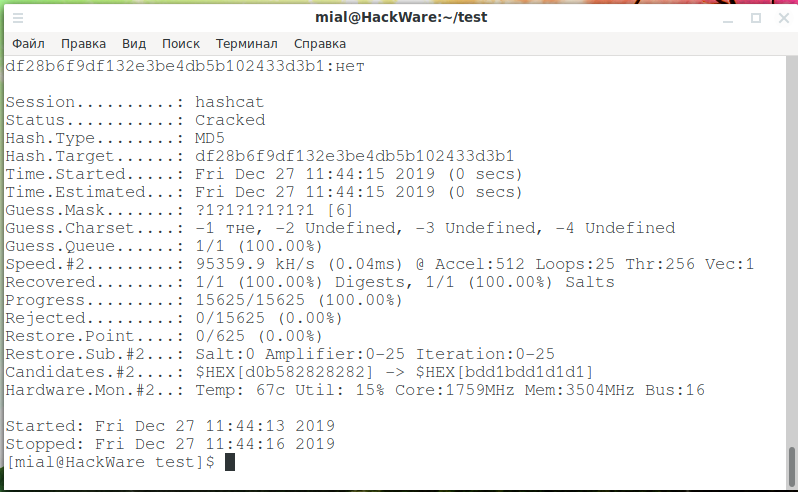 Suddenly, the hash is hacked!

Once again, clean up the ~/.hashcat/hashcat.potfile file as we continue our experiments.

The point is that password cracking programs (in fact, like hashing programs and many others) do not care about the used encoding – they work with bytes, with a sequence of bytes.

Each letter of a non-Latin character in UTF-8 encoding consists of two bytes. Therefore, when we specify a custom character set as follows: -1 тне, then hashcat instead of three Russian letters sees six bytes in this line, they are:

As you can see, two bytes are duplicate – this is D0. That is, there are five unique letters with a word length of 3 characters, so the number of all combinations is 53 = 125, just as much as we saw in the screenshot above, and it was sorted out.

When we specified a mask of three user characters, the generated password candidates were only three bytes long, although the word “нет” was six bytes long — that is why the six-character mask worked.

So, to launch a mask attack to brute-force a password containing non-Latin characters (double-byte encoding), you need to double the length of the mask. As for custom character sets, you need to consider the coding of the console, or save the characters of the custom sets in files with the desired encoding and specify these files with options -1, -2, -3 and -4.

Therefore, let's think about how to optimize the process. Let's look at a line that contains all the characters of the Russian alphabet:

This line consists of the following bytes:

Please note that in the first position there are only two options D0 or D1.

Let us return to our string “тне”. The following bytes are present in it:

That is, in the first position there will be only D0 or D1, and in the second position of bytes there can be 82, BD and B5. Create two custom character sets and explicitly specify the bytes in each of them. In order for hashcat to understand that we specified bytes, not English letters and numbers, you need to use the --hex-charset option. As a result, we get the following command: 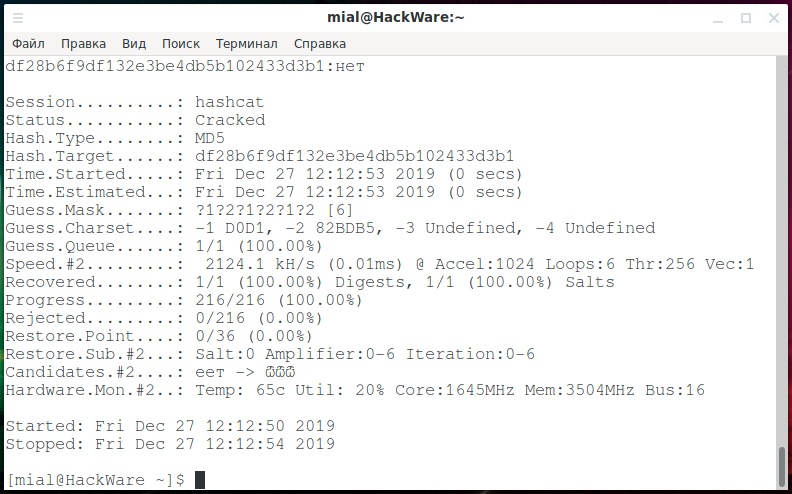 Let me remind you that in the previous command to launch hash cracking, when we specified a mask of six characters, 15625 candidates for passwords (56 = 15625) were tried – and this is only for a three-letter word, when all three letters are known… This is too bad.

Let's look at the line in the last run command:

Thanks to such a simple optimization, the number of candidates for passwords was reduced from 15625 to 216, that is, 72 times!

I think the essence of the idea is clear, consider a few related issues.

How to use hashcat files with alphabets in different encodings

Together with hashcat, files with the extension .hcchr are supplied – these are files with characters of certain alphabets in various encodings:

An example of Russian characters in various encodings:

They can be used, keep in mind to double the length of your masks for double-byte encodings. But you should NOT need to use them, since in this case brute-force will take place without optimization, and most of the password candidates will obviously be inappropriate, which will significantly increase the cracking time.

How do I know which bytes a character is encoded?

The following command (replace the word "нет" with the desired string or character) will show which bytes the string is composed of:

Using the iconv command, you can convert strings and files to the desired encoding:

If sponge is not found on your system, install the moreutils package.

You can use the online service, which will show the bytes from which the character or string is composed: https://w-e-b.site/?act=encoding-converter 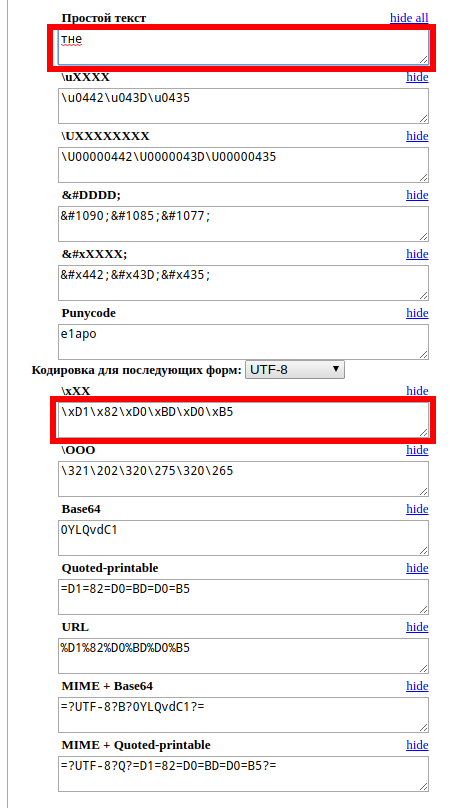