How to speed up the scanning of large networks ranges

The article “How to find out local IP addresses of ISP” discusses scanning ISP users on local networks such as 10.0.0.0/8, 172.16.0.0/12, 100.64.0.0/10. This is the only possible way to scan for hosts that are behind NAT. But the problem is that these networks are large – they have a lot of IP addresses and scanning, especially over Wi-Fi (and not over the wire), takes days. The article linked to shows some techniques for identifying the ranges of user congestion, which can speed up the process quite well.

In the article “Nmap usage tips” I added a new recipe “Fast scanning of huge networks in nmap”. The method source is referenced, of course I checked it before adding it. And it showed unexpectedly good results. I used it in tandem with Router Scan – so we'll compare the scan time with just one Router Scan versus preparatory steps with Nmap scans.

This option, in fact, is not always suitable – if you have a low quality Internet connection, then such an intensive scan can completely clog the channel (the Internet will be lost and, most likely, many online hosts will be missed).

Suppose I want to scan for routers on the 100.64.0.0/10 subnet. If you just enter this range into Router Scan and start scanning, it will take several days.

Note: Router Scan works fine in Linux through Wine in terms of finding vulnerable routers, but if you are using Router Scan on Windows, then you can use the commands below in WSL – they will work fine there.

The main idea behind fast scanning is to ping with a high level of concurrency:

After the scan is complete, you can parse the XML document to find out which IP addresses are up.

You can decrease the value of the --min-parallelism option if you notice symptoms such as loss of Internet connection. Wired networks can usually be set to higher values than Wi-Fi. The worse the Wi-Fi signal, the lower the value must be set.

Now, let's extract all the IP addresses that are online (status “up”) and save them in the hosts.txt file:

The scan was completed even faster – in 17 minutes. The disadvantage of this method is clearly visible here: of the previously identified as working 140509 hosts, 121710 turned out to be online. Due to the features of fast scanning, some packets were lost, and we did not find out that the hosts were on the network.

Let's extract the IP addresses that are online from the file obtained as a result of the second scan:

Let's count the number of hosts that have open at least one of the ports we are interested in:

I loaded the IP addresses from the routers.txt file into Router Scan. The scan took 18 minutes, and a total of 1,870 vulnerable routers were found.

Of these, 1135 were previously unknown. 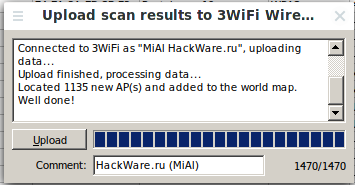 It turned out that I spent a little over an hour (43 + 17 + 18 minutes) instead of waiting for the scan results for several days. This efficiency gain was well worth the effort.