Guide to GPS Metadata in Photos (Part 2): How to understand, extract and convert geographic coordinates

Table of Contents: Guide to GPS Metadata in Photos

1. Programs for manipulating metainformation in images

2. How to understand, extract and convert geographic coordinates

2.2 What is geographical coordinates

2.4 How to output coordinates in decimal numbers from GPS metadata

2.5 How to determine the approximate location on the globe by coordinates

2.6 How to find out where a photo was taken without using third-party services

2.7 Converting coordinates to decimal and minutes/seconds

3. How to spoof GPS and other metadata in photos

4. How to build motion tracks based on a group of photos

With the programs mat and mat2, you can view and delete file metadata (a huge number of file types are supported). But what if, instead of deleting, you want to change the metadata in a photo or document? These programs will not help you with this task.

In addition, we will figure out various ways of coordinate formats – in order to write or edit something, you need to figure it out. We will also learn how to copy coordinate values from a photo to a map so that you can view the shooting location without uploading an image to third-party services.

We will also learn how to save metadata to a file so that this metadata can then be written to another photo and how to copy metadata between photos.

Well, as a bonus, we will learn how to display only those metadata that we need and change the format of their output.

In this tutorial, we'll look at three awesome programs at once:

They all work on both Linux and Windows – the links for each have detailed installation instructions. Geotag also has a graphical interface! That is, spoofing (replacing) GPS in photographs is reduced to editing the numbers in the table.

The most powerful of these programs is ExifTool (by the way, check out its documentation). When working with editing geographic coordinates, Geotag uses ExifTool, so if you use Geotag on Windows, you also need to install ExifTool and specify the path to the executable file (everything is already in the instructions on the links above). By the way, mat2 also uses ExifTool to show and remove meta information. And Exiv2 uses, for example, the GIMP photo editor to display and edit meta information.

The jhead program can also change metadata, but its capabilities are very limited – for example, it cannot change GPS coordinates in a photo.

What is geographical coordinates

Geographic coordinates are latitude and longitude.

Latitude defines the up-down location on the globe/map. The equator is considered zero. Longitude defines the right-left position on the globe/map. Greenwich is considered zero. We'll talk about the numbers themselves and how to figure out what part of the planet the coordinates are in below, but for now, there are a lot of coordinate formats about how they are written.

The decimal separator can be a period or a comma. Positive signs of coordinates are represented (in most cases by omitted) sign "+" or letters:

Negative signs of coordinates are represented either by “-” or by letters:

The letters can be in front or behind. There are no uniform rules for recording coordinates.

By default, search engine maps show coordinates in degrees with a decimal fraction with a "-" sign for negative longitude. On Google maps and Yandex maps, latitude first, then longitude. These coordinates are visible, for example, when laying routes from arbitrary points. Other formats are recognized during the search.

We don't have to go into all this in detail. From a practical point of view, we need to remember: you can search on map services (for example, Google Maps) for coordinates in the format “2 numbers with a decimal fraction; the decimal separator is a period”.

For example, instead of a place name, you can enter two decimal numbers in the search box on the map, for example: 12.459444 99.978611. And Maps will show you a place on the planet, located at the appropriate coordinates.

In principle, coordinates are easily converted to decimal numbers, but this work can be omitted, more on that below.

You can also add that, for example, Google Maps accepts the following formats:

But it is most convenient to use the decimal format.

How to output coordinates in decimal numbers from GPS metadata

If you get coordinates in the form of decimal numbers from a photo, you can find their location on map services without even loading the image itself, but simply by searching by coordinates.

I found two programs that can display coordinates in decimal form. 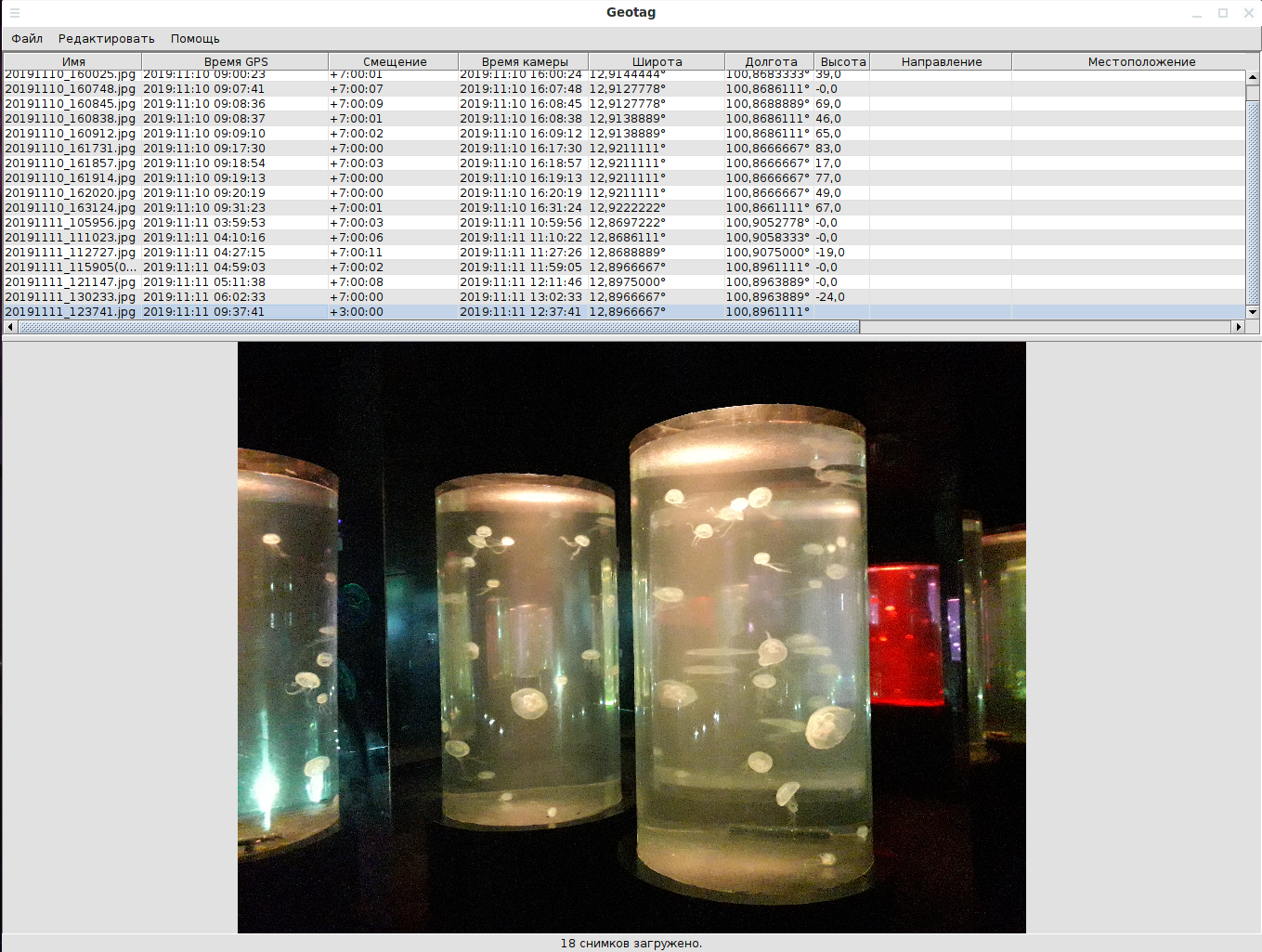 Secondly, this is ExifTool in which, using options and specifying tag names, you can display exactly what is required.

Using the “-lang LANG” option, you can display the name of meta information tags in your native language, for example, in Russian: 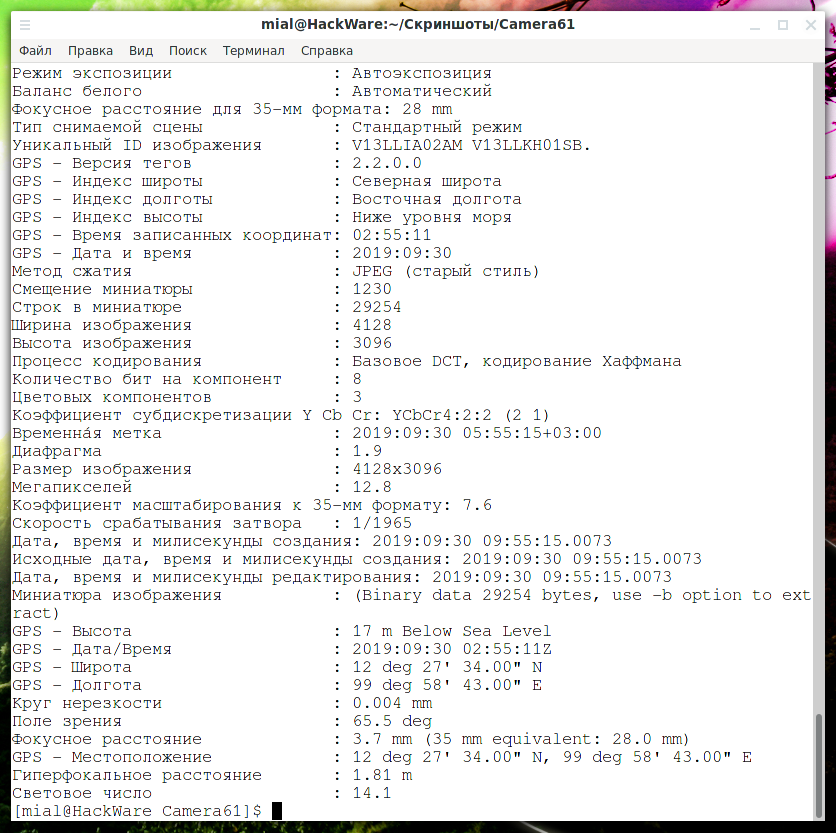 If you add the option '-*GPS*' (quotes are required!), Then only metadata tags with the string "GPS" in their names will be shown:

If only latitude and longitude are needed, then the tag name is "-GPSLatitude -GPSLongitude":

Finally, if you specify the -n option, the coordinates will be displayed in decimal form:

Also remember that the -n option will not use letters to indicate hemispheres and will output negative numbers if required.

The -c option allows you to set the format of the displayed coordinates. For example, if you have too many (or too few) digits after the decimal point, then their quantity can be changed with this option.

For example, to show only six digits after a period, and also to not use letters to denote hemispheres, but use the minus sign, you need to specify the -c '%+.6f' option.

Using the -c option, you can configure not only the decimal format, but also any other – you can make absolutely any form of displaying coordinates.

How to determine the approximate location on the globe by coordinates

What can you tell by looking at the following coordinates?

If nothing, now we will learn to “by eye” determine the approximate location by coordinates, even without a map – at least in which hemispheres the coordinate is located and how far it is from the equator, Greenwich and the poles.

Note that the latitude range is 180 degrees (half circle) and the longitude range is 360 degrees (full circle). The range of longitude allows you to “move” around the entire circumference of the globe (around the equator). And the latitude range allows you to move only along the visible half – if you would need to move beyond the North/South Pole, then you need to change the longitude, that is, “move” to another part of the equator. Therefore, 180° latitude is sufficient, but 360° longitude is needed.

In accordance with international agreement, the meridian that passes through the Greenwich Observatory (London, UK) was assigned a value of 0° longitude, in other words, it was chosen as the reference point for longitude on the globe. The longitude of other locations is measured as the angle east or west of the prime meridian, ranging from 0° to +180° east and 0° to −180° west. "

So, back to our coordinates:

If you do not want to upload a photo to any website or service, then this is a completely understandable desire.

The first method is already shown above – extract the coordinates from the image, go to Google Maps and enter them, in one of the following formats (distinguished by spaces and commas separating two numbers):

If suddenly a coordinate does not have decimal digits, then add “.0” to it, otherwise the service will not understand that these are coordinates – both numbers must be with a dot and a digit after it.

The second way is to use Geotag. This program in one click launches its local web server, which hosts a web page with a map, opens a browser and shows the photos that you have selected on the map.

Now we select the photos that we want to see on the map (you can select one, or several, or all).

Right-click on the list of images and select the desired action. 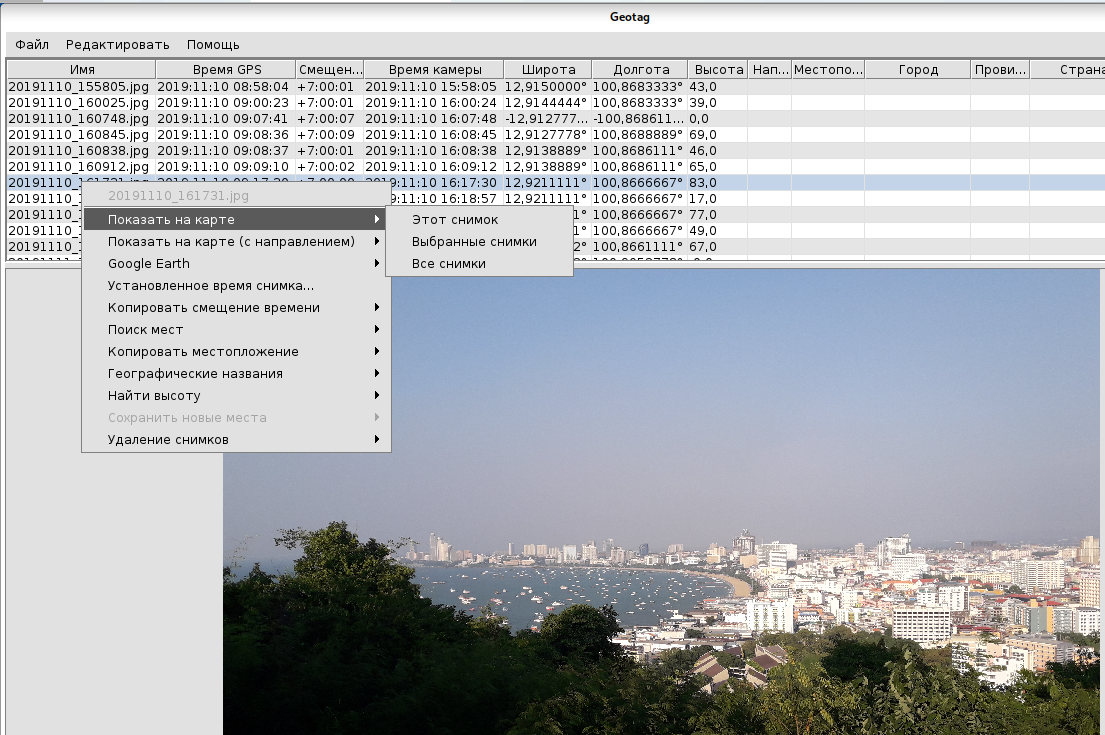 A browser with such a page will open. 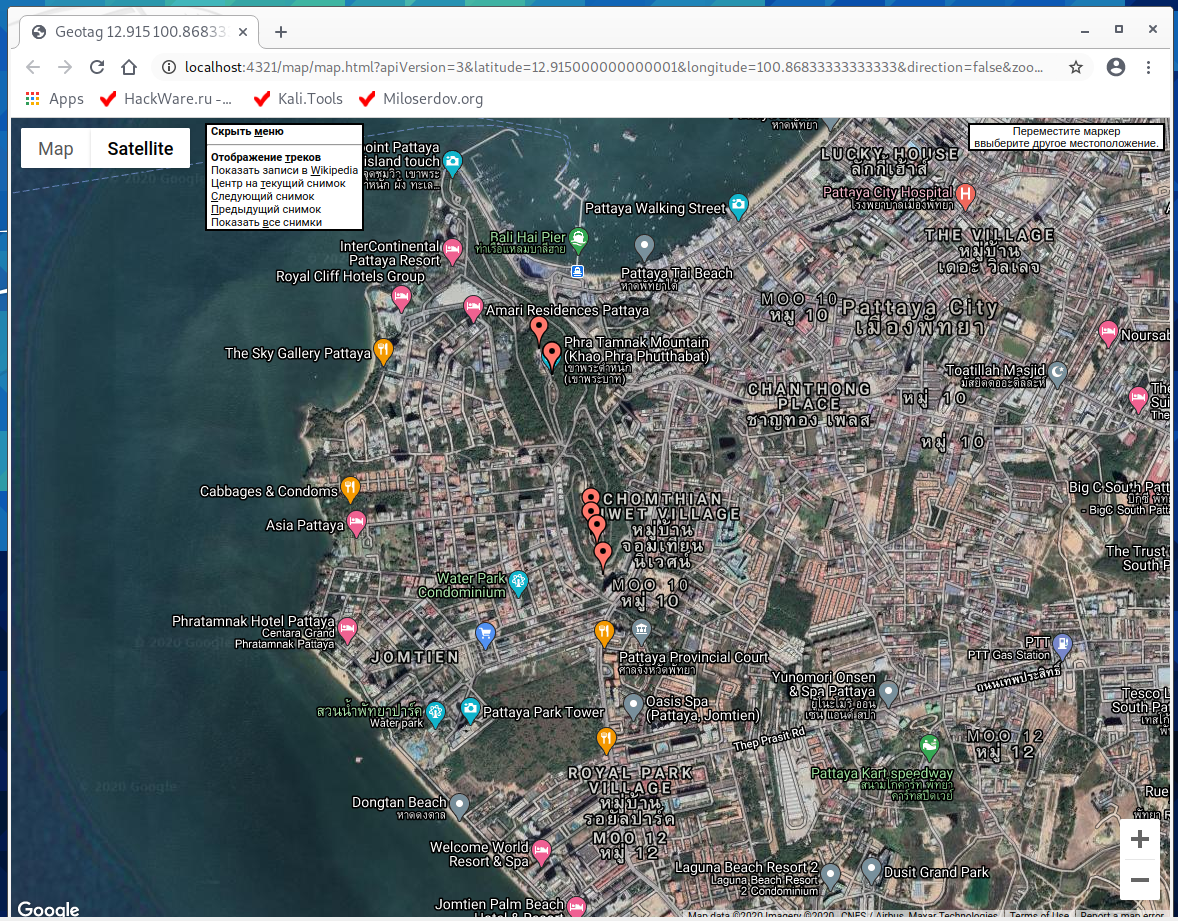 Converting coordinates to decimal and minutes/seconds

Conversion to decimal is performed using the following formula:

That is, the degree remains as it is, and minutes and seconds are divided by 60 and 3600, respectively.

If the string contains the letters S (south) or W (west), then a minus sign is placed in front of the number. That's all.

In order not to count manually (besides, when converting to minutes and seconds, you need to perform several actions), we will write a small script that will do this for us.

In this case, the coordinate will be calculated in the format of degrees, minutes and seconds.

In this case, the coordinate will be calculated in decimal format.

I hope the examples are obvious and do not need to be commented on.

If you just want to view what metadata is present in the files, and also see on the map where the photo was taken, then you can use the following online services:

Now these services have been switched to use ExifTool, so you will see absolutely all the metadata of your file.

Continuation: in the third part “How to change GPS and other metadata in a photo” we will learn how to remove and change GPS tags, creation time, comment, manufacturer and camera model in the metadata of photos.