Reverse engineering is the study of a device or the operation of something not based on documentation, drawings, etc., but through disassembly, analysis of components, analysis of work. The same principles apply to software. For example, if the network protocol is proprietary and there is no documentation or source code for it, then you can examine the requests and responses sent to write a client (or even a server) that supports the protocol. This can be used to port programs to another platform or to write an open source client. Reverse engineering is also used to analyze malware.

In addition to getting acquainted with basic examples of network traffic analysis (using the Wireshark program), we will learn how to send "raw" data in UDP and TCP. That is, not using HTTP, HTTPS or any other application layer protocols, but using only transport layer protocols. And also we will consider a fairly simple, but at the same time quite effective “obfuscation” of traffic to protect against analysis in Wireshark.

And for the computer, this very CMS program is used, which supports many cameras from various manufacturers. For example, I tested the R80X20-PQ camera, which, judging by the MAC address, is manufactured by HangZhou KuoHeng Technology. This is quite interesting, given the zoo of manufacturers of IP cameras - it turns out that all these cameras are united by some one protocol.

The CMS software is the official client of Polyvision cameras. In the program itself, when adding a camera, you can choose from four options:

First I added the camera as “Onvif” and then as Polyvision. We are already familiar with the ONVIF protocol from the article “IP camera security audit”: this protocol allows you to control an IP camera, get the address of a media stream, sometimes it is possible to use this protocol without entering a password. But the ONVIF protocol is bad in that it does not allow access to the storage of video files.

By connecting as Polyvision, you can control the camera and plus access to the video storage on the IP camera's memory card.

It was this Polyvision “protocol” that interested me - it turns out that cameras from different manufacturers use it. When communicating, this protocol uses port 34567, which reminded me of the article “IP Camera Security Horror”.

How CMS searches for cameras

The ONVIF Device Manager and CMS software, considered in the previous article, quickly detect IP cameras without even asking for network settings. A cursory analysis showed that they do not scan IP and ports on the local subnet, then how do they do it?

Let's launch Wireshark and start searching for new devices in the CMS. When the search is complete, stop capturing traffic in Wireshark. 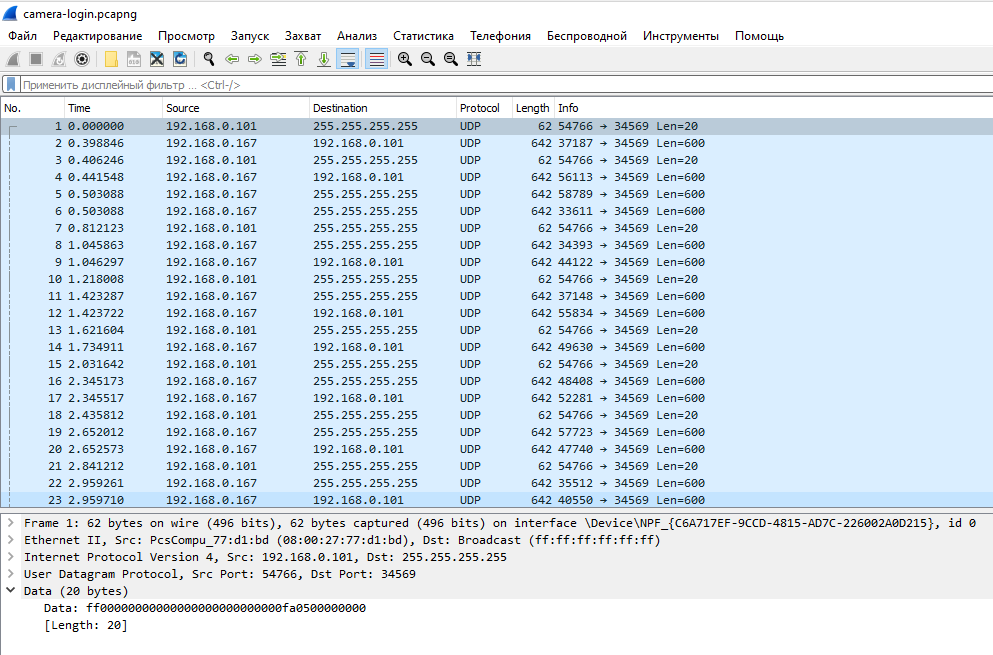 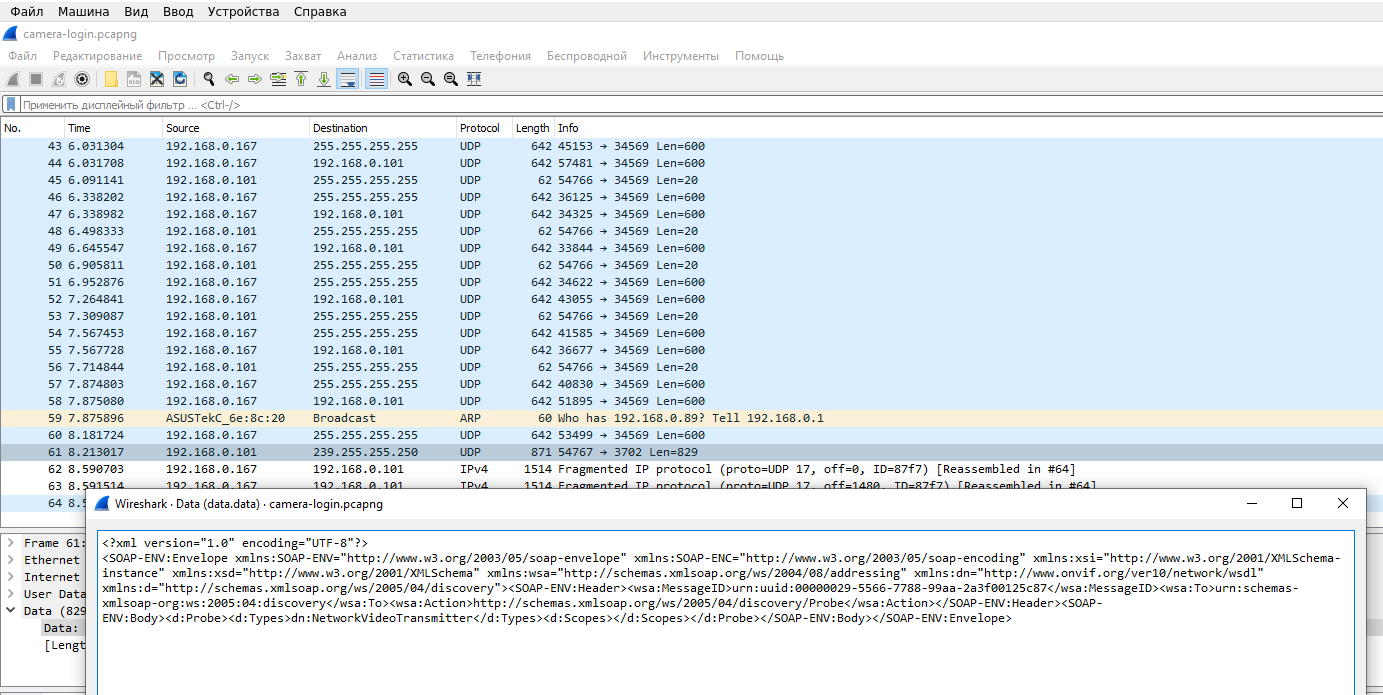 The following data is transmitted:

As you might guess, this is the familiar ONVIF protocol. We will not dwell on this protocol in this article, just remember that you do not need to scan the subnet to search for ONVIF - you can use the broadcast address and SSDP protocol.

Let's look at the answers that the camera sent. For Polyvision, these are: 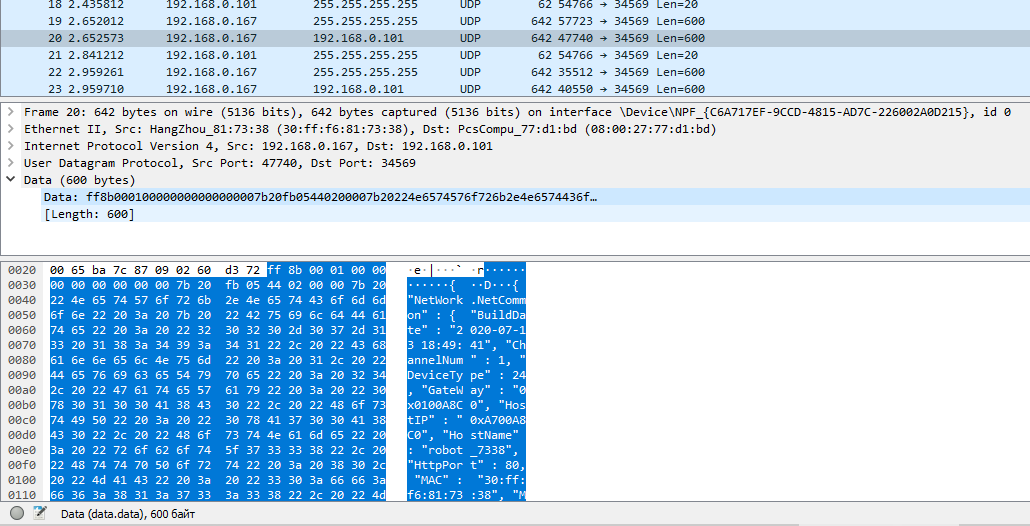 At first glance, the data is unreadable, possibly binary or encrypted. At least Wireshark didn't recognize any protocols in them.

Related article: How to use netcat (nc), ncat

In order not to just make a connection when data is entered manually (entering hexadecimal data manually is difficult for us), but to connect and immediately transfer data, you can use a command of the form:

The -u option means to use UDP protocol (TCP is used by default).

Let's start by saving the data we need to the hello-camera.bin file. To do this, we'll use the Bless hex editor:

In the program that opens, in the hexadecimal area, enter: 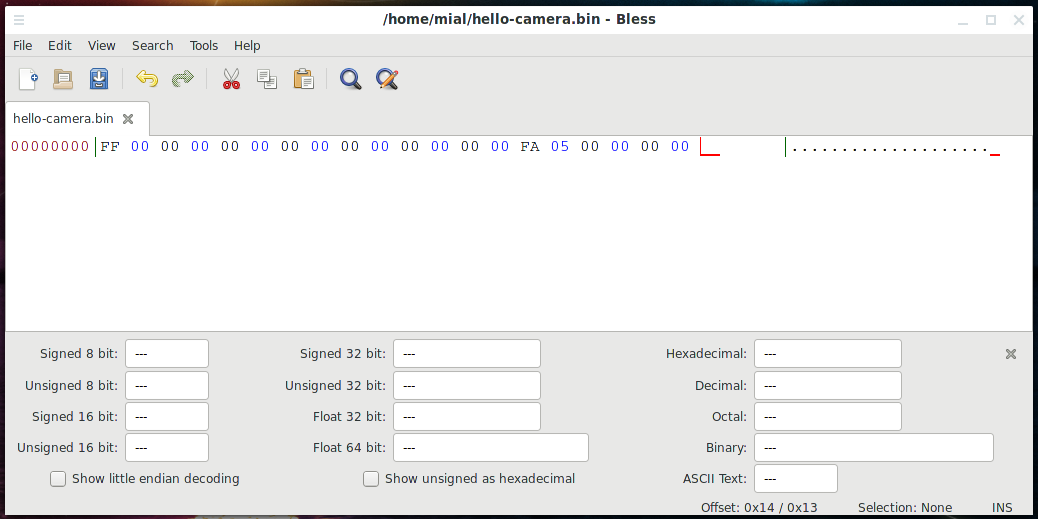 Then save the file as hello-camera.bin.

Now we can send data to the broadcast address with the command:

And… didn't work? In fact, it is impossible to answer whether it worked or not - we sent data, but the UDP protocol does not wait for a response, it ends the connection. To send a response from the remote host, it starts a new UDP connection, but the fact is that to connect it, we must listen on the port. The answer will come to UDP port 34569. You can also listen on the port with the ncat command. To do this, use a command of the form:

In this command, the -u option means to use UDP protocol (TCP is used by default). The -l option means listen for incoming connections. IP-ADDRESS is the IP of the network interface on the local machine where the ncat utility is running. PORT is the listening port.

Nothing seems to be happening, but the program does not exit - it just waits for an incoming connection.

Without closing this terminal window, open another console and send the request to the broadcast address again:

After that, the received response will be shown in the first console:

To save the submitted response (instead of displaying it on the screen), you can use the following command to listen for incoming connections:

As a result, the sent response will be saved in the response.bin file, open it in the Bless editor: 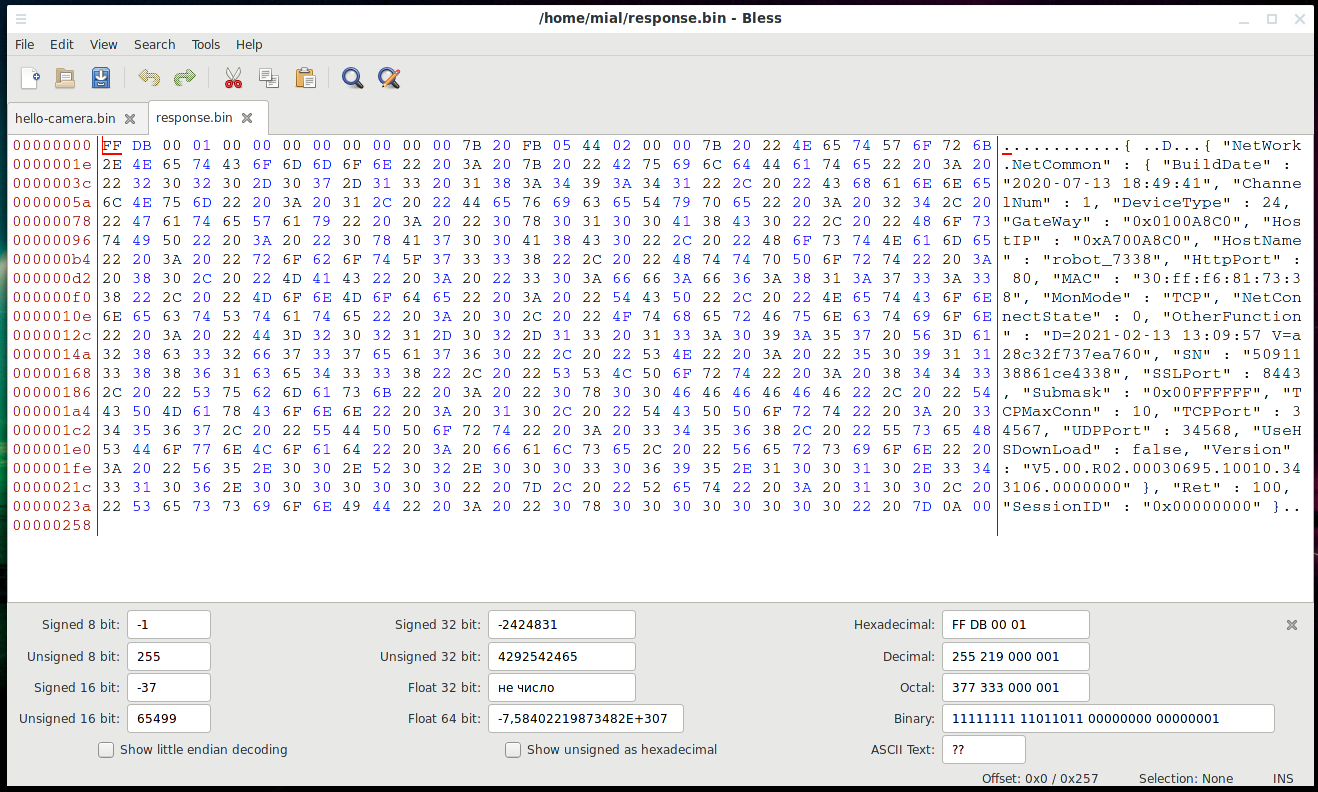 Most of the data is plain text, but due to the binary data in front of it, Wireshark was unable to parse the information.

Let's look at them:

Let's pay attention to the lines:

That is, the CMS program sends data to the broadcast address, and all cameras respond by sending information about themselves. This information is used to further connect to the camera.

Let's enter the camera in the CMS program, before that, restart data capturing in Wireshark. Let's analyze the captured traffic.

Since the capture took longer than the first time, then among the captured traffic there is not related to the camera. Let's filter it using the Wireshark filter: 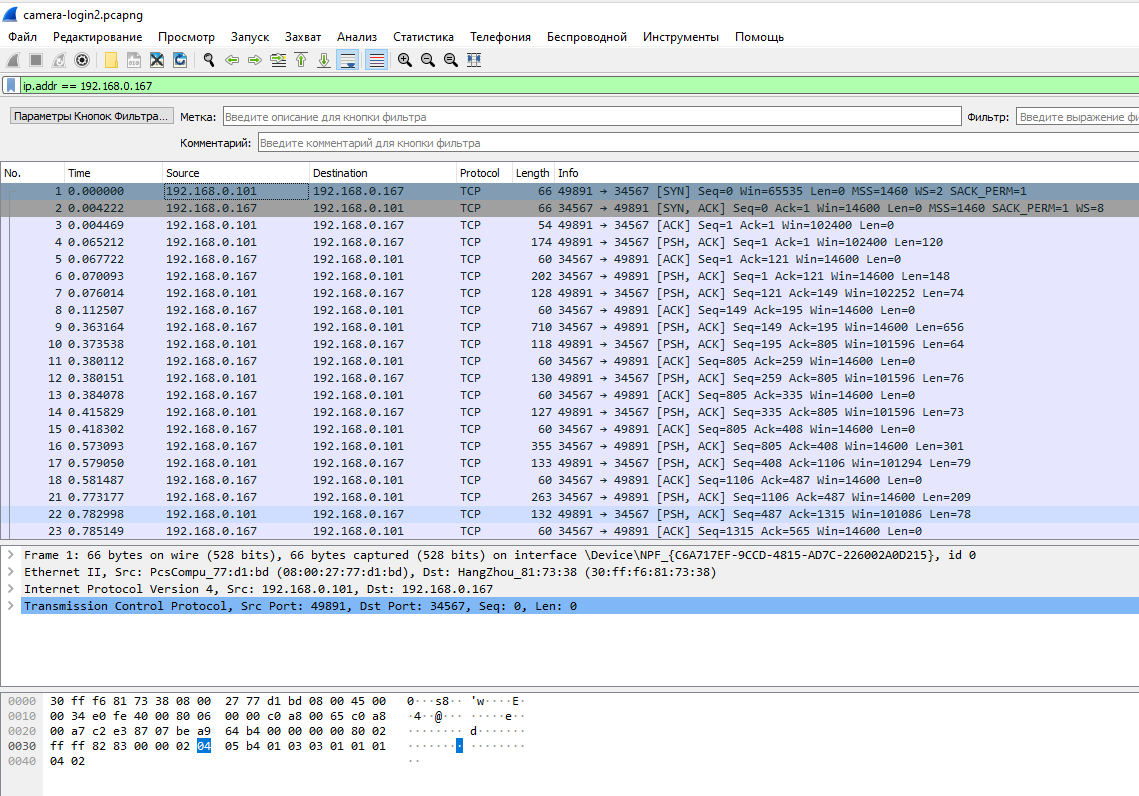 Note that Wireshark again did not recognize any protocol and shows the transmitted data as raw TCP traffic.

Right-click on the first packet in the context menu, select “Follow” → “TCP Stream”. 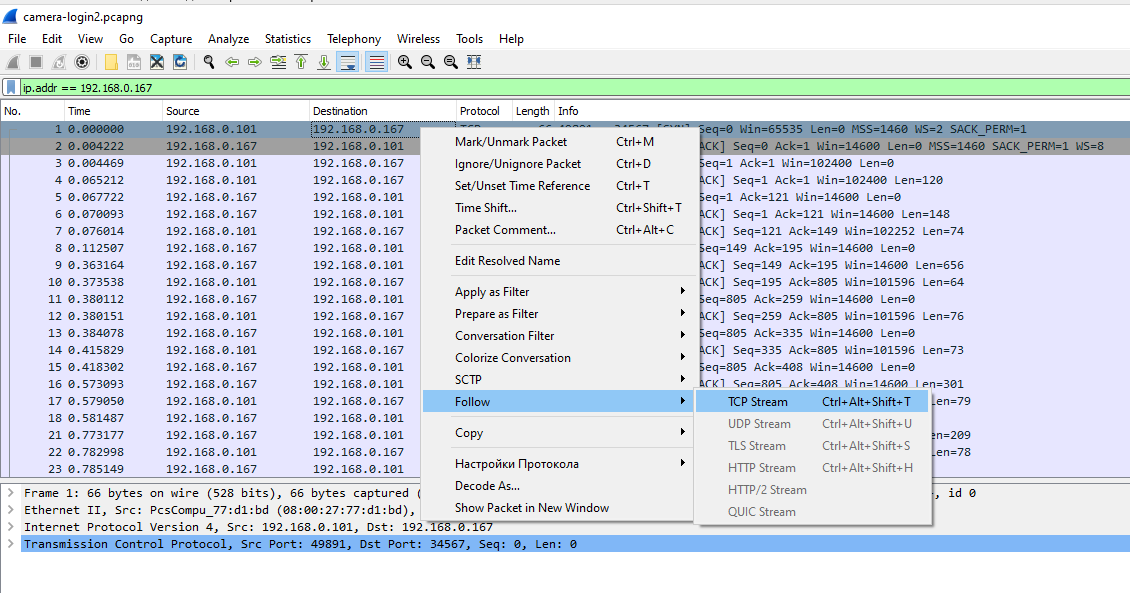 The data is in plain text, but there is binary garbage in front of it, so Wireshark again failed to parse it.

We can see the hash of the password. Thanks to the DVRIP-Web line, I found the article https://habr.com/ru/post/484518/. This article says that “the protocol, supposedly invented by the Chinese, which is used to communicate with surveillance cameras”, it is called either DVRIP, or Sofia, or NetSurveillance. In the same article, you can find the algorithm by which the password hash is calculated. If I remember correctly, the password can contain no more than 8 (or exactly 8) characters.

Now, in the “Show data as” field, I select the “Raw” option.

In Bless, I create a file named "hex" and write this line into it.

Now data is sent by TCP. To simply send raw data over TCP to ncat, remove the -u option. But in this case, you will not receive a response. In order to send data and receive a response, you need to use the construction:

As you can see, we have received a response.

I recorded all the binary lines that the CMS program sent to the camera into separate files named hex1, hex2, and so on up to hex12. To play a complete dialogue with the camera, you can use the command of the form: 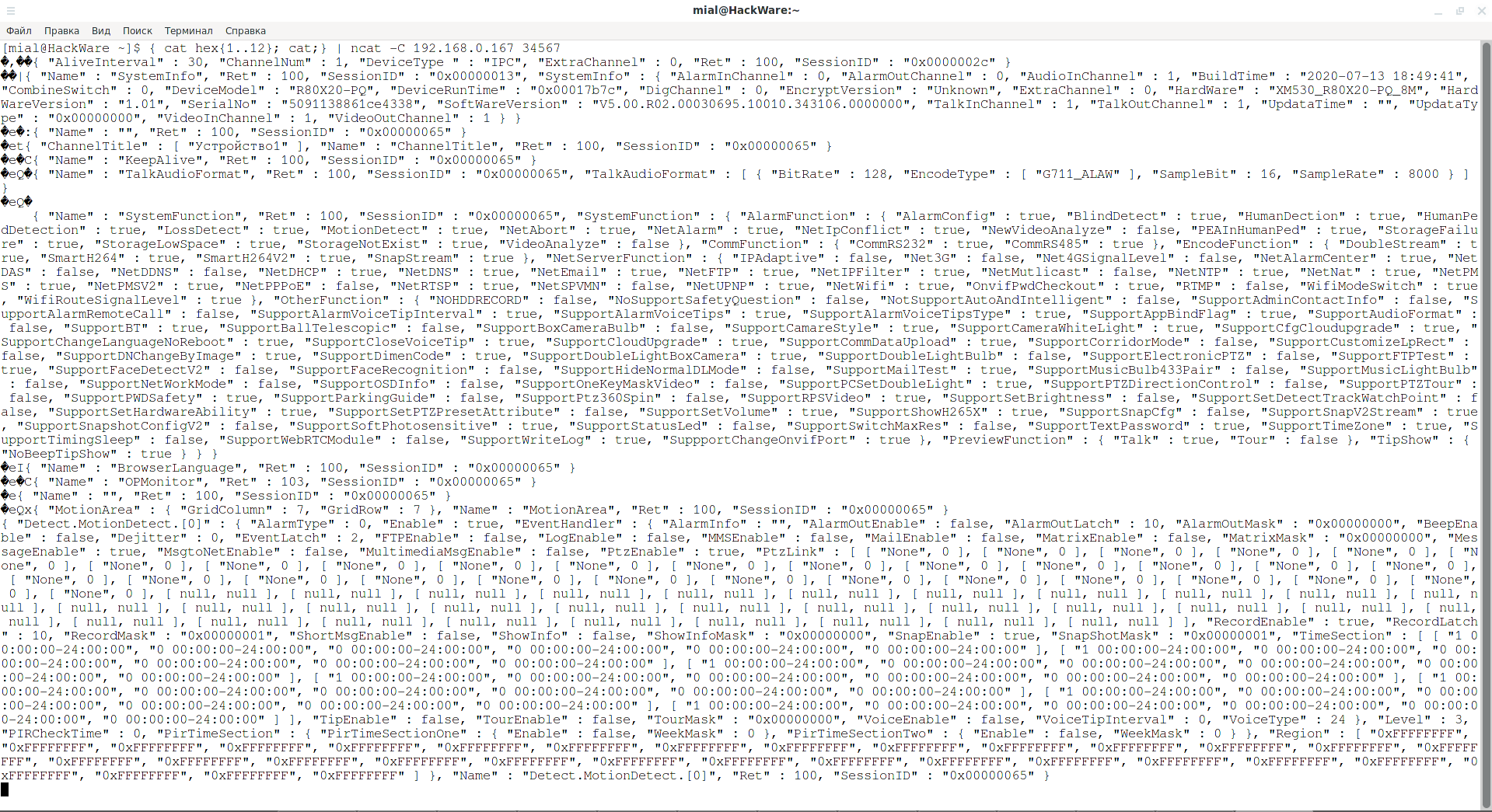 As you can see in the screenshot, the full “dialogue” between the CMS and the camera, which we saw before in Wireshark, is reproduced. More precisely, only the answers are shown, but they are the same.

You may have noticed the SessionID - its value increases by one each time we login the camera. Nevertheless, I did not change this value in the sent data - I was sending the same value all the time, this did not bother the camera. Although, to get the video, you probably need the correct SessionID value. Also, binary data before text data is not just garbage - they duplicate the session number, as well as information about the type of data sent/received, and in general it is necessary to take into account and substitute the session identifier sent to us in the first response.

So, this article shows an example of network traffic analysis for reverse engineering purposes. Continuing with the analysis, you can get information to write your own camera control client. For example, you can write a client that uses an intercepted hash instead of a password. By the way, you can use the following Wireshark filter to find the password hash:

In fact, having learned the name of the protocol used, it was possible to find ready-made implementations and even documentation. The finished implementation is written in Python 3, called python-dvr.

The python-dvr utility (or library) allows you to record videos from cameras, take JPG snapshots, create users, change passwords, and many other things. In terms of security auditing of IP surveillance cameras, python-dvr can be used to brute force camera credentials. This will be the subject of the next article “How to brute-force DVR-IP, NetSurveillance, Sofia”.

python-dvr article: “How to manage cameras via DVR-IP, NetSurveillance, Sofia protocol (NETsurveillance ActiveX plugin XMeye SDK)”. This article briefly talks about using DeviceManager.py. It is a powerful program for detecting IP surveillance cameras on the local network. If you look at the source code, you can see all the techniques used, among them there is the one that we “revealed” in this article.