How to get a custom domain name for Tor hidden service

Anyone can create their own Tor hidden service. You can find detailed instructions on how to do this by following the links

The hidden service address ends in .onion, always consists of 56 characters (this is in version 3, and in version 2 the addresses consist of 16 characters), which can be any small letters and numbers from 2 to 7. These addresses are generated automatically, and usually they are an unreadable set of characters, almost impossible to remember.

However, it is possible to get a .onion domain name that contains or starts with the string you want (main site domain, your name, service name, etc.). For example, the address hacking5xcj4mtc63mfjqbshn3c5oa2ns7xgpiyrg2fenl2jd4lgooad.onion starts with “hacking” string. If you clicked on the link, and the page was unavailable, then you are not connected to the Tor network - you need to open it, for example, in the Tor Browser. Another good, in my opinion, domain name with a lot of repeating letters is hackwareennyyxdk.onion (address for the second version), it is also good if after the desired line (site or company name) there is a number, for example, hackware6r2lay6j.onion, kalitools3cfvozx.onion, hacktools5nfie4s.onion.

You cannot customly create a .onion domain name, but you can create a large number of random names and choose the appropriate ones from them. With the help of Scallion you can automate and speed up this process by using a graphics card. It looks for domain addresses that match one of the entered regular expressions, but it only works with the second version. There is mkp224o program for TOR Onion v3 vanity, but it only works on the central processor. We'll cover both of these programs in this article.

TOR Onion version 2 hidden services will stop working in October 2021. Check the Tor logs to find out which version you are using. If you see the following line there, then you are using the second version and you need to upgrade to the third:

If you are interested, you can check out the Tor Rendezvous Specification - Version 3 for yourself. I’ll look at what this transition means in practice.

In practice, this means:

The most annoying thing is that at present I have not been able to find a program that would generate beautiful names of hidden Tor services on the video card. There is software that runs only on the central processor. The excellent Scallion program only supports TOR Onion service version 2 and will probably never support the third version as the authors announced that they had abandoned the project.

How to get beautiful name TOR Onion v3 vanity

There are several programs for generating beautiful names of hidden services, they all run on the CPU, some have already been sent to the archive by the authors:

I will show an example of generating a beautiful name using the mkp224o program as an example.

Let's start by installing the dependency to compile this program.

On Arch Linux, Manjaro, BlackArch and their derivatives, run:

Further, it is the same on all distributions:

Go to the official website of the program on the release page: https://github.com/cathugger/mkp224o/releases and download the archive “mkp224o-*-w64.zip”.

To work with the program, you need to run it on the command line. If you do not know what this is, then read the article “How to set up the PowerShell environment on Windows and Linux”.

2. Suppose the mkp224o.exe file is located in the C:\Users\MiAl\Downloads\mkp224o\ folder, go to it using the cd command:

3. To start generating addresses of the hidden Tor service, run a command of the form (replace hackware with the word you need): 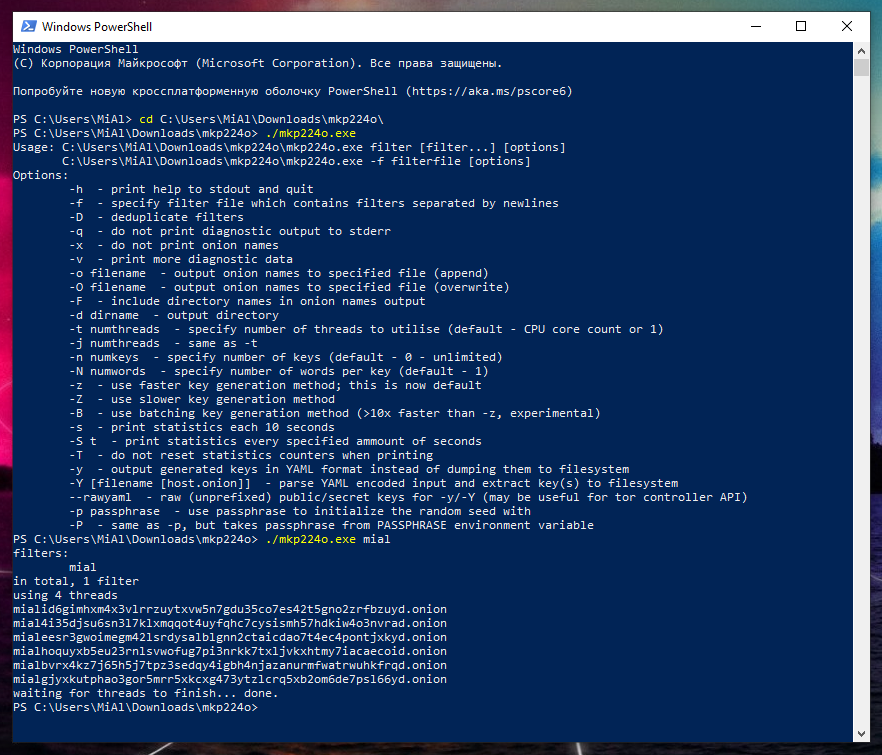 To start generating the names of hidden services, run a command like:

For example, to generate (or rather filter out) names with the string “hack” in their name:

And using the -d option, we specify the folder where we want to save the generated keys:

You can run it with several filters at once:

Filters do not need to be specified on the command line - they can be taken from a file. For a complete list of options for the mkp224o program, see this page: https://en.kali.tools/?p=1210

How to use the generated keys

If it was possible to generate a key suitable for filters, then one or several folders will be created, for example: hacking5xcj4mtc63mfjqbshn3c5oa2ns7xgpiyrg2fenl2jd4lgooad.onion

There are three files in each folder:

In the folder name, as well as in the hostname file, you can see the name of your home.

Technically only hs_ed25519_secret_key is required, but you can copy the entire folder to where you want to store the keys. For example, by default they are located in the /var/lib/tor/hidden_service/ folder.

In the following example, I move the keys folder to the /var/lib/tor/hackware directory:

Set the correct owner and permissions.

Include these keys in the /etc/tor/torrc file:

We restart the service and check its status:

How to get a nice name TOR Onion v2 (Scallion instruction)

Attention! Scallion only supports TOR Onion service version 2 and apparently will never support the third version as the authors announced that they had abandoned the project.

The program works on Linux and Windows. I'll show you how to work with the program using Windows as an example.

The source code of the program is located on this page. There you can also find a link to download an executable file for Windows, at the moment the latest version is 2.1, a link to it.

After a space, write down the phrase you are interested in and press Enter. At each launch, a quick SHA-1 test is performed and then the search begins. If the word is short, the result will be found quickly. 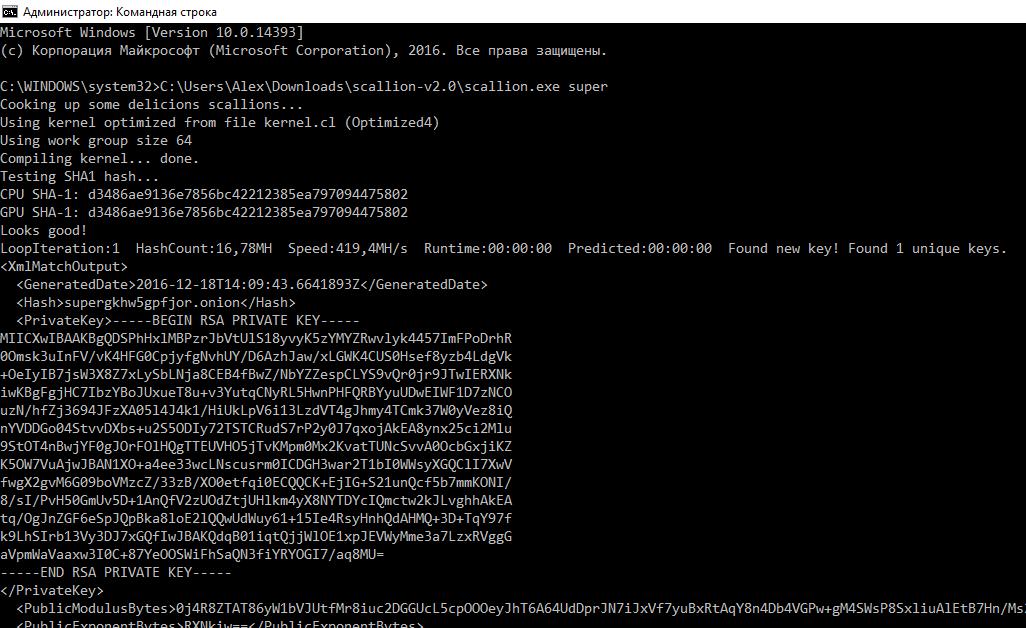 Through the syntax of primitive regular expressions, Scallion supports single or multiple searches. Only character classes are supported (for example, [abcd]). Symbol . (dot) means any character. By default, the entered phrase is considered the beginning of the domain name. If you are searching in the end of the name, then add $ to the end of the phrase (for example, DEAD$). Finally, the pipe character (for example, pattern1|pattern2) can be used to search across multiple patterns at once. Adding a lot of regular expressions has almost no performance impact.

Generate a domain name starting with the prefix phrase followed by any digit:

Search with the ending “badbeef”

A tricky but obvious example:

Searches for a tor hidden service address that matches one of the provided regexes.

You can find a detailed description of launching a hidden service here and here.