The method of filtering only suitable password candidates using Rule Based Attack, shown in the article “How to create dictionaries that comply with specific password strength policies”, is not always convenient. More precisely, it is convenient when working with existing dictionaries. If using this method to generate new dictionaries, then there is a problem with saving the intermediate dictionary, which can be very large.

Another approach can be used, with the following algorithm:

Cons of this approach:

Examples of regular expressions that will be useful to us:

There must be one capital letter:

There must be two capital letters:

There must be three large letters:

There must be one small letter:

There must be two small letters:

There must be three small letters:

There must be one number:

There are two numbers required:

There are three numbers required:

How to generate wordlists

The following command will generate passwords that have at least two uppercase letters, one lowercase letter and one number: 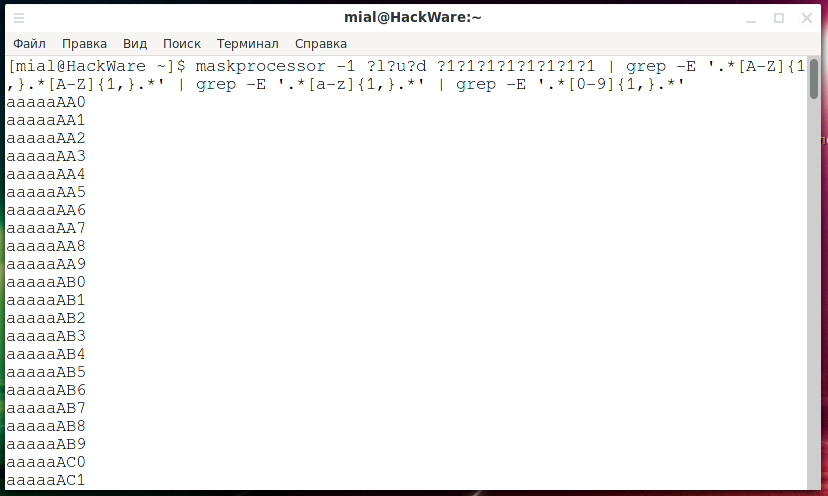 The generated passwords can be saved to a file:

The generated and filtered password candidates can be used directly with hashcat by passing them to standard input.

Let's generate a hash for cracking:

In hashcat, as the attack type, you need to select Dictionary Attack (-a 0).

An example of a command that cracks a test hash:

In this command, the first half is the same as in the commands above, that is, maskprocessor generates all possible password candidates, and the grep command sequence filters out only matching words. The resulting words are passed to hashcat standard input.

The same method can be used to select from existing dictionaries only those candidates for passwords that meet the specified criteria.

Let's take a dictionary for the test:

Let's count the number of words in it:

For details on the problem solved by the previous command, see the article “How to find and remove non-UTF-8 characters from a text file”.

Let's count the lines in it:

Now, instead of the maskprocessor command to generate words from the mask, we use the cat command to read the file and use | (pipeline) let's pass it to grep commands for filtering (the same conditions are used - at least two capital letters, at least one small letter and at least one digit):

Let's count the number of remaining password candidates in the new dictionary:

Let's calculate how much this is from the total:

It turned out that there were less than 1 percent of the words left.

Why then the Rule-based attack?

As the authors of Hashcat write, the rule-based attack is faster than the grep command. In my tests with one video card on a laptop, the bottleneck is still the video card, that is, the speed of grep is enough so that Hashcat does not wait for the generation/filtering of the next candidate for passwords.

The Rule-based attack allows not only filtering words, but also modifying them, that is, this attack has many other possibilities.