How to generate dictionaries by any parameters with pydictor

4. Dictionary based on custom character sets

6. Permutation and combination of strings

This tutorial is devoted to the pydictor program. The pydictor utility is a very powerful dictionary generator that probably does everything that can be done with other well-known dictionary generation tools, and has its own unique functionality. The program has many features, but is poorly documented – when preparing this manual, I relied on the translation of Chinese documentation, outdated English documentation, studying the program API, tables with some information from the author, which I was able to decipher only partially, as well as undocumented examples using the program like these:

I hope you appreciate my efforts ))

As the author of the program himself says (or maybe it's just some kind of Chinese wisdom): “Destination is just a point of departure. It's your show time”. So let's get started with pydictor already.

The dictionary generation methods are as follows:

The functions are as follows:

Only one generation method can be selected in one command. As for the functions, you may select: not use them at all, use one or several at once – depending on your needs.

You can see the pydictor options on this page: https://en.kali.tools/?p=1320

It is easy to get confused in them, since the commands for choosing the generation method and the filtering function are mixed together. Some more options start with one hyphen, some with two – I didn't see any logic why this was done like that. Taking these inconveniences, let's look at examples of generating dictionaries with pydictor.

Let's start by generating word lists of specific characters and word lengths. This is a bit like generating dictionaries based on masks (Mask attack), although different from it.

The -base option specifies the character sets that the generated words should include, you can choose from:

The “--len MINIMUM MAXIMUM” option specifies the length range. The default values are: min=0 and max=4.

For example, the following command will generate a list of words consisting of small letters (-base L), two to three characters long (--len 2 3):

Pay attention to the lines: 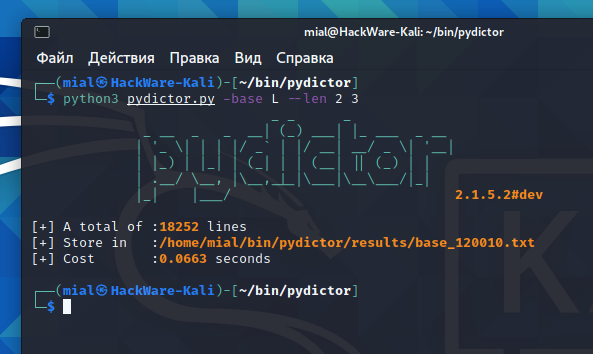 Let's look at the beginning and end of the dictionary: 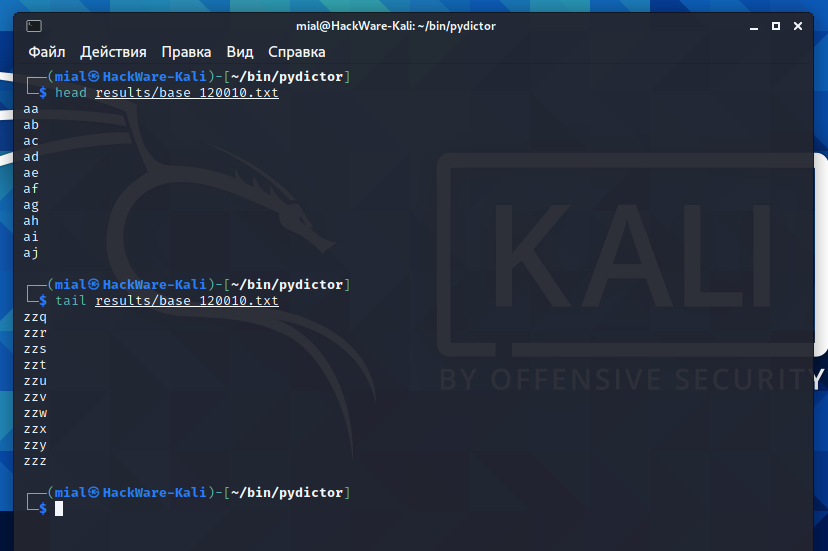 With the -o, --output option, you can specify the path and file name where the dictionary should be saved:

To generate words from 1 to 3 characters long (--len 1 3) from numbers, uppercase and lowercase letters (-base dLc) and save them to the specified file (-o /awesome/pwd):

Dictionary based on custom character sets

Custom character sets are specified with the -char option. Remember to put the character string in quotation marks if there are spaces or other special characters in the set.

The following command will create words of length 1 to 3, consisting of the characters “asdf123._@ ”:

There are two options for adding strings:

In similar programs, for example, Maskprocessor and crunch, there is no need for such options – you just need to write literal characters in the mask. But pydictor is a more flexible program that can generate dictionaries, including not based on masks, but, for example, by combining words from different dictionaries or from data about the “victim”. Since masks are not used in these examples, the --head and --tail options come to the rescue.

Permutation and combination of strings

To make it clear what exactly is happening, let's look at the output of the following command: 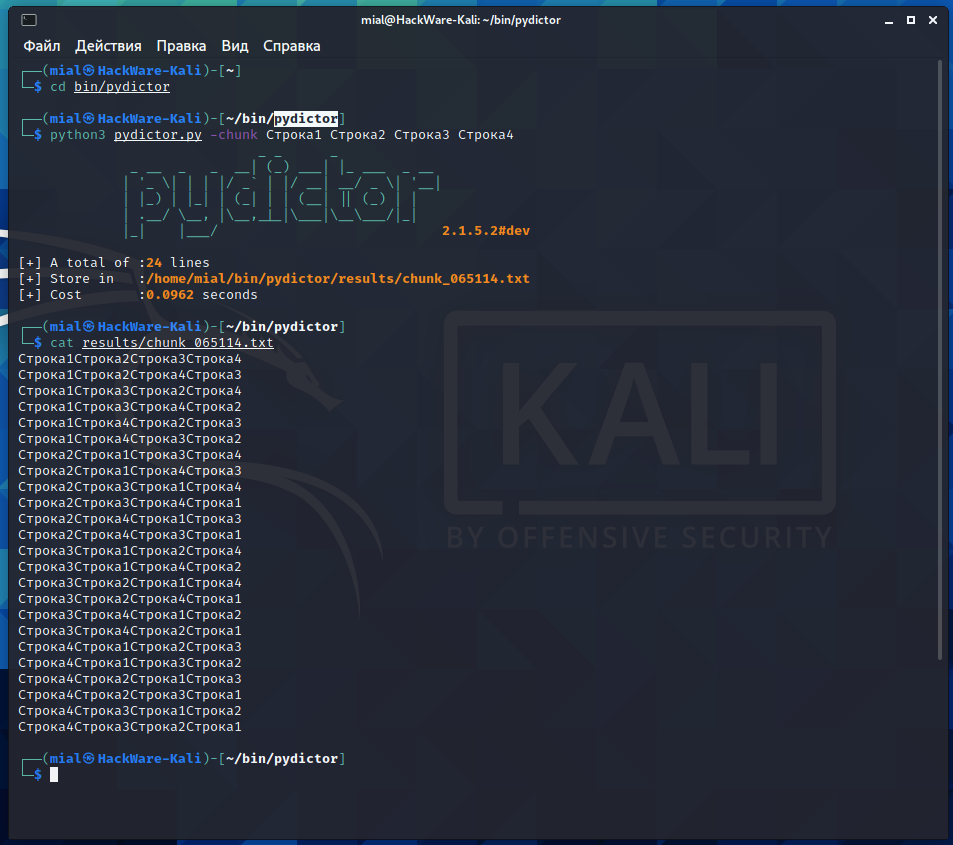 That is, the arguments to the -chunk option are combined in all possible combinations, each line being used once.

I think the essence is clear, in the following command, words are generated from six fragments of different lengths, to which lines are then added at the beginning and end:

In pydictor, you can filter or create lists of words that match the conditions:

To do this, pydictor has the following options:

The options discussed can also be used with dictionary processing tools (they will be discussed in the next part) when combining dictionaries, cleaning, and other actions.

Comparison operators can be used with these options:

The section “How to create dictionaries that comply with specific password strength policies (using Rule-based attack)” shows the principles of generating dictionaries that meet certain criteria. In short, the essence is as follows:

Therefore, we will consider an example of filtering words that meet certain conditions from a ready-made dictionary.

If you are on Kali Linux, then the dictionary is already there, just unpack it:

For details on the problem solved by the previous command, see the article How to find and remove non-UTF-8 characters from a text file.

The following command will take ~/rockyou_clean.txt as the source file, and remove all duplicate words (-tool uniqifer ~/rockyou_clean.txt), then it will filter the list of words, with each word having three or more letters, more than two digits and zero special characters (--occur ">=3" ">2" "==0"), the result should be saved to the specified file (--output ~/uniq.txt):

The following command will only save words with 8 or fewer letters, 4 or fewer numbers, and 0 special characters:

There are several options at once to emulate a Mask Attack:

They are all poorly documented, and their work differs from the intuitively expected behavior.

With the --conf option, you can specify the path to the file where the template is written, and you can also specify the template string (in fact, the mask), according to which the dictionary will be generated.

One symbol represents a five-element construct:

Of these, you can omit the prefix and suffix, and the other three are required.

Suppose we want to generate a list of words consisting of three digits (mask ?d?d?d), then the command is as follows (note: the site engine cannot master and correctly display the < none > lines, therefore some commands are shown in pictures):

Now, let's say we want passwords in which a number comes first, then a small letter, then two numbers (mask ?d?l?d?d), then the construction is as follows:

Sounds complicated? Don't be in a hurry to get upset. When you realize how much flexibility this syntax has, you will appreciate it.

If you need to specify literal characters, then they do not require special syntax, for example, the command:

In the command shown, the literal string becomes the prefix or suffix of one of the elements.

In the previous examples, we used ranges such as [0-9] (all digits) and [a-z] (all small letters). But you can specify any ranges, for example:

Take a look at the following example:

In it, the range includes not individual characters, but the strings bob, b0b and BOB. That is, the first part of the generated words will include one of these lines, then there will be four digits, and at the end there will be the string “@passw0rd”.

End of the first part

We covered the basics of using pydictor, and the instruction turned out to be quite voluminous, so we will get acquainted with other features and tools of this program in the next part.