1. What is dev and phy for iw command

2. Simultaneous use of a Wi-Fi adapter in different modes

3. Adding an interface in monitor mode

4. How to remove a virtual interface

6. How to add an AP interface with iw

7. How to use one Wi-Fi card as a client and an Access Point

8. Commands for displaying the names of network interfaces

What is dev and phy for iw command

The Airmon-ng program for wireless adapters shows information such as PHY and Interface.

The iw program allows you to control the network adapter by referring to it either as a phy device or as a dev interface. In this case, the set of commands is different. 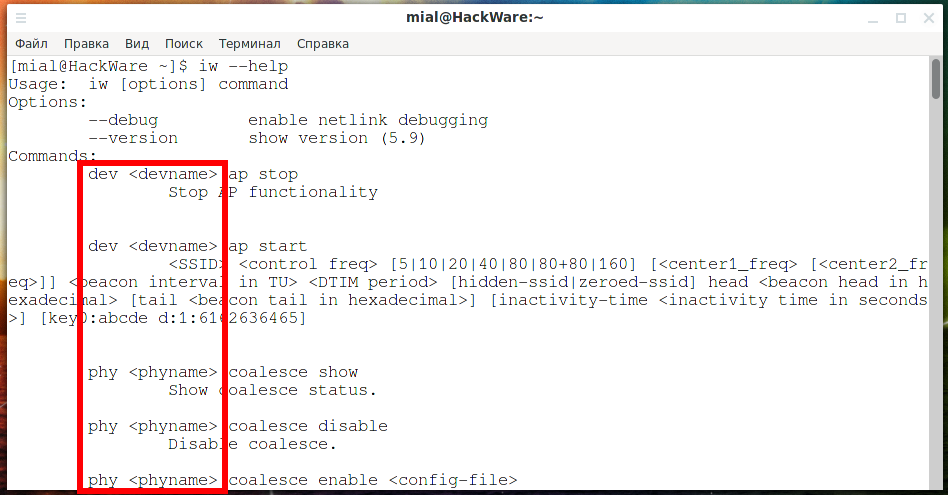 A PHY, an abbreviation for "physical layer", is an electronic circuit, usually implemented as an integrated circuit, required to implement physical layer functions of the OSI model in a network interface controller.

A PHY connects a link layer device (often called MAC as an acronym for medium access control) to a physical medium such as an optical fiber or copper cable. A PHY device typically includes both Physical Coding Sublayer (PCS) and Physical Medium Dependent (PMD) layer functionality.

That is, in Linux, PHY is the number assigned to the device by the PHY driver/framework for accessing it and configuring it at the data link layer.

Simultaneous use of a Wi-Fi adapter in different modes

It would seem, so what? Through phy, you can manage settings, the meaning of which is not clear without reading special technical documentation. Using the dev interface name, you can control more familiar settings (switch to monitor mode, switch to a specific channel, and so on).

Run the following command for a complete listing of the capabilities of all your wireless interfaces:

Look for the following lines:

Example for the first Wi-Fi adapter:

Also, this wireless adapter can have up to two network interfaces in managed, P2P-client modes, up to two AP, mesh point, P2P-GO interfaces, but in any case, the total number of interfaces cannot be more than two, while all of them have there must be one channel (#channels <= 1).

Up to four AP interfaces can be added.

Up to 8 AP interfaces can be made, but all of them can use one channel.

Adding an interface in monitor mode

My preferred way to get monitor mode is to move the existing wireless interface from managed mode to monitor mode:

As a result, the Wi-Fi card, while it is in monitor mode, loses its ability to connect to the Access Points, that is, there is no Internet connection.

This problem can be solved by adding a new interface.

Adding an interface in monitor mode is done as follows:

For INTERFACE, specify the name of an existing interface, and for NEW_INTERFACE, you can specify an arbitrary name.

Optionally, you can assign an arbitrary MAC address to the new interface:

Let's see what wireless interfaces are available in the system:

We see that the wlp0s20f0u1 Wi-Fi card is connected to a network named Jenechka. 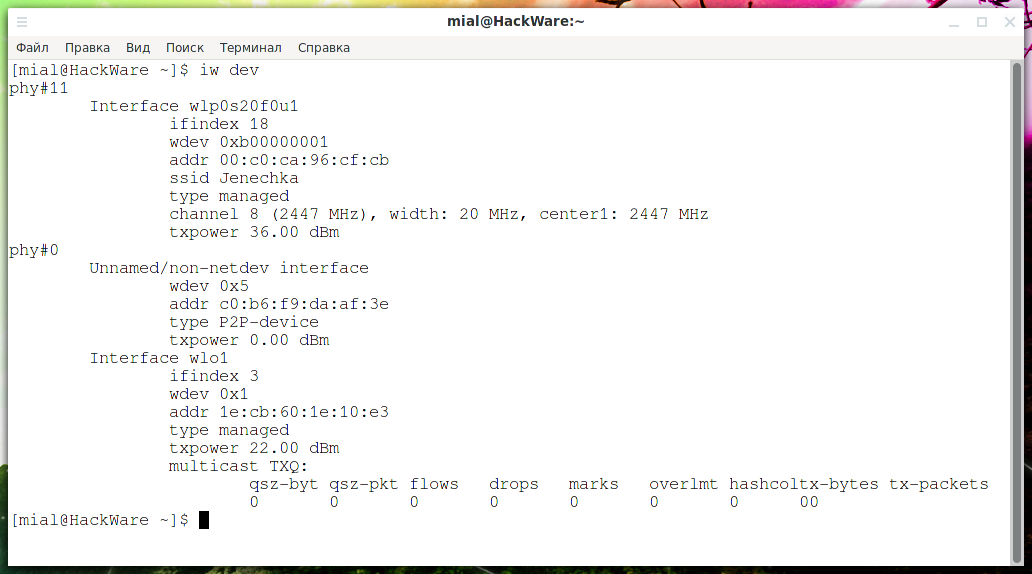 Let’s add an interface named wlanmon in monitor mode to wlp0s20f0u1 and set the MAC address on it:

Let's take a look at our interfaces again: 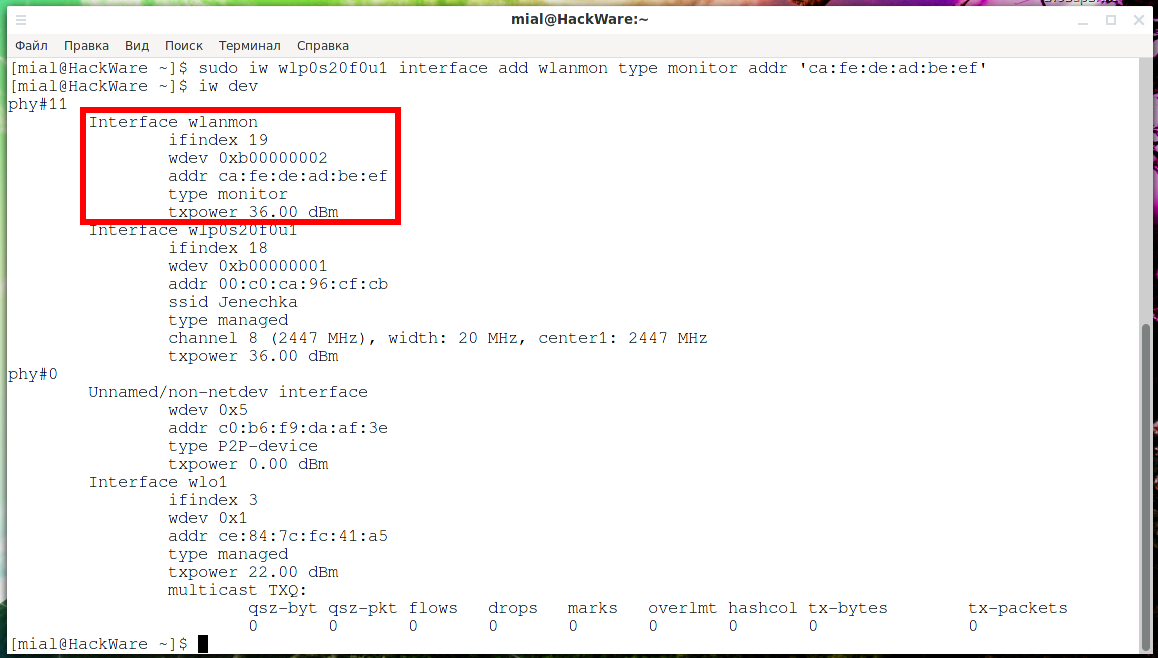 Please note that there is a new wlanmon interface.

And in another window, let's start a ping to make sure that the network connection is still available:

Please note that in spite of the fact that the Wi-Fi adapter needs to be on the same channel to communicate with the AP, nevertheless, the interface in the monitor mode switches over the channels.

Moreover, after stopping the screen recording, airodump-ng even managed to catch a handshake.

I have not noticed that the virtual interface in monitor mode, if used to capture data, interferes with the Internet connection. But if you try to send something from it (for example, to deauthenticate wireless clients), then the Internet connection is terminated. Most likely, this is due to a change in the channel used.

How to remove a virtual interface

To remove the virtual interface, use the command:

Above were shown examples of the command in which we specified the name of the network interface:

You can also add a virtual interface named PHY:

This can probably be useful if you have removed all existing interfaces (if possible).

Flags are used only for monitor interfaces, valid flags are:

The mesh_id is used only for mesh mode.

How to add an AP interface with iw

You may have noticed that there is no AP in the above list of valid interface types. This AP type interface will be created automatically when the Access Point is created.

For simplicity, we will use the create_ap program (the link shows how to install it).

For example, on the wlo1 interface, I want to create an AP with the name HackWare and the password 12345678, the wlp0s20f0u1 interface should be used as the Internet source, then the command is as follows: 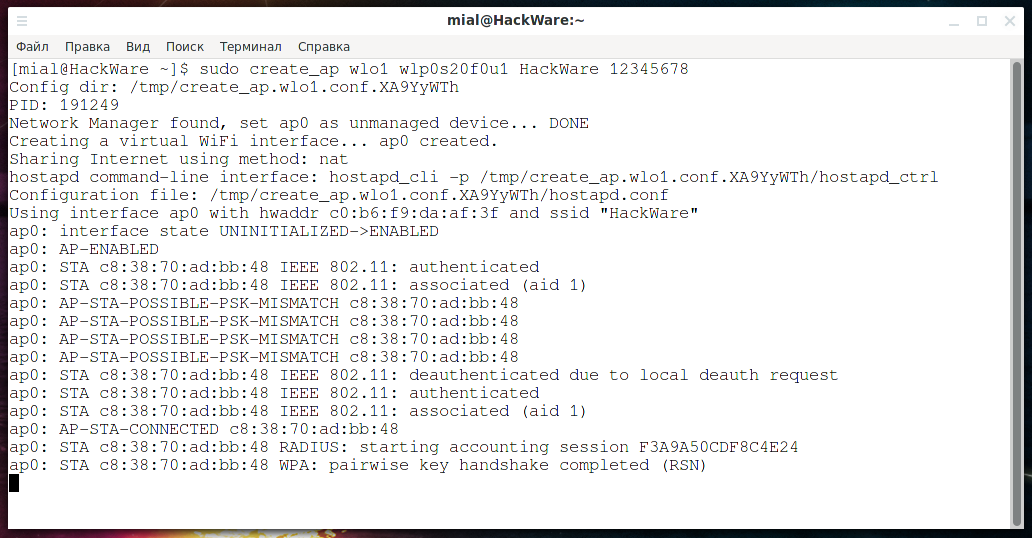 I can connect to this AP and use the Internet: 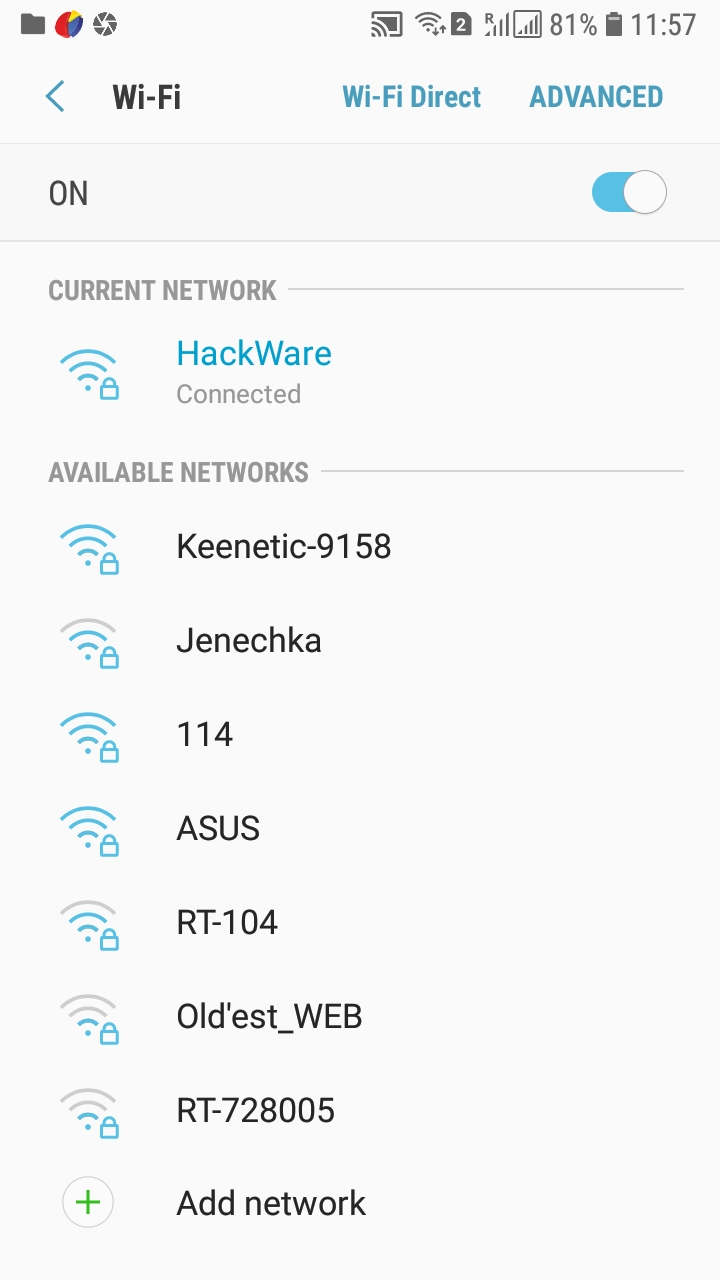 On the computer, a new interface of the AP type was created with the name ap0: 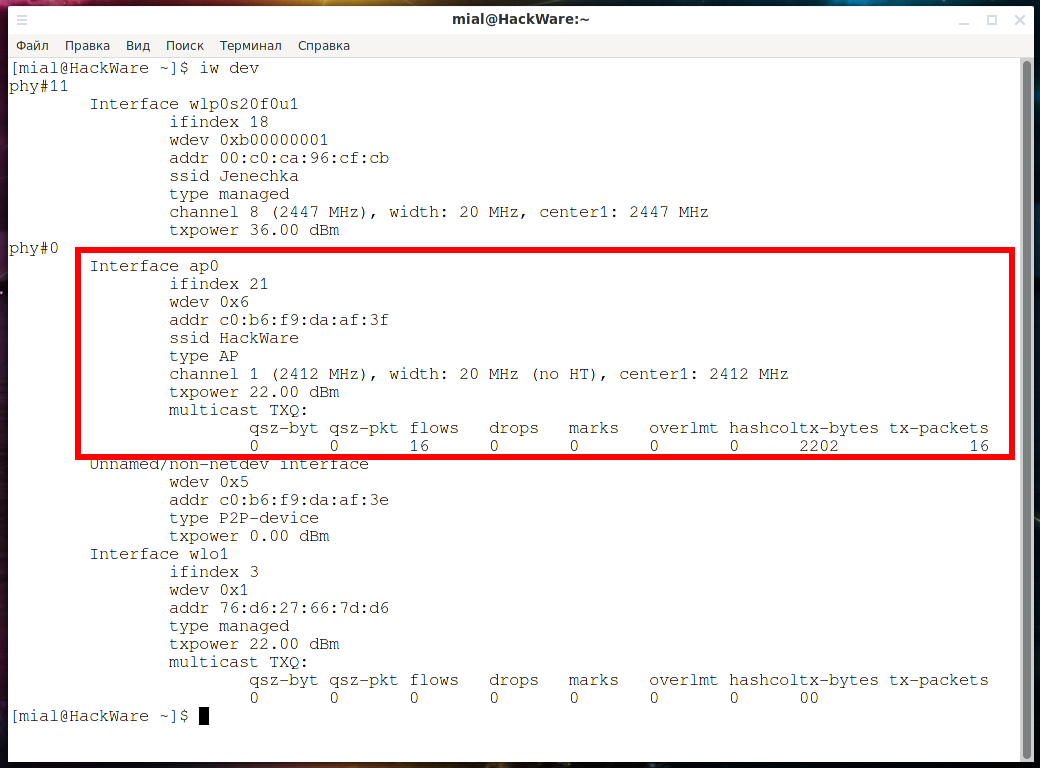 The method shown above assumes that you have two network interfaces – and one of them must be a Wi-Fi adapter, and the second can be either a Wi-Fi adapter or a wired connection.

Let's start by stopping NetworkManager, otherwise in my case I kept getting the error “RTNETLINK answers: Device or resource busy”:

If you have NetworkManager removed from startup, then you need to start by activating the wireless interface: 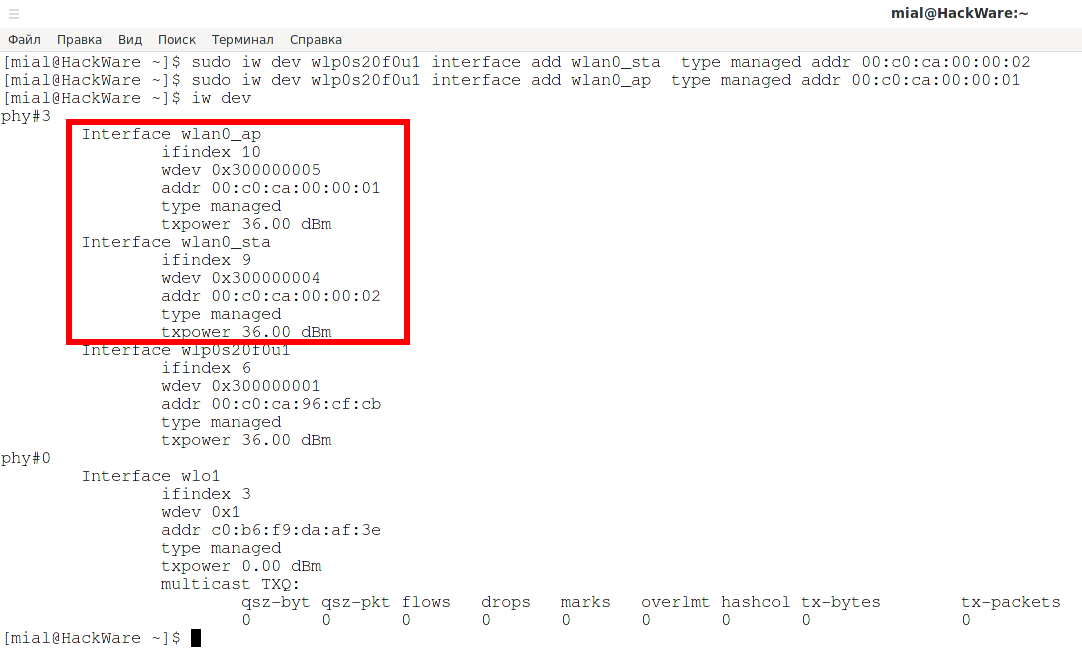 Since we disabled NetworkManager, now we need to connect to the remote AP manually.

We create a configuration file:

We make the connection:

If you want the wpa_supplicant process to go to the background, add the -B option:

We start the DHCP service to automatically obtain an IP address:

We look at the state of the interfaces: 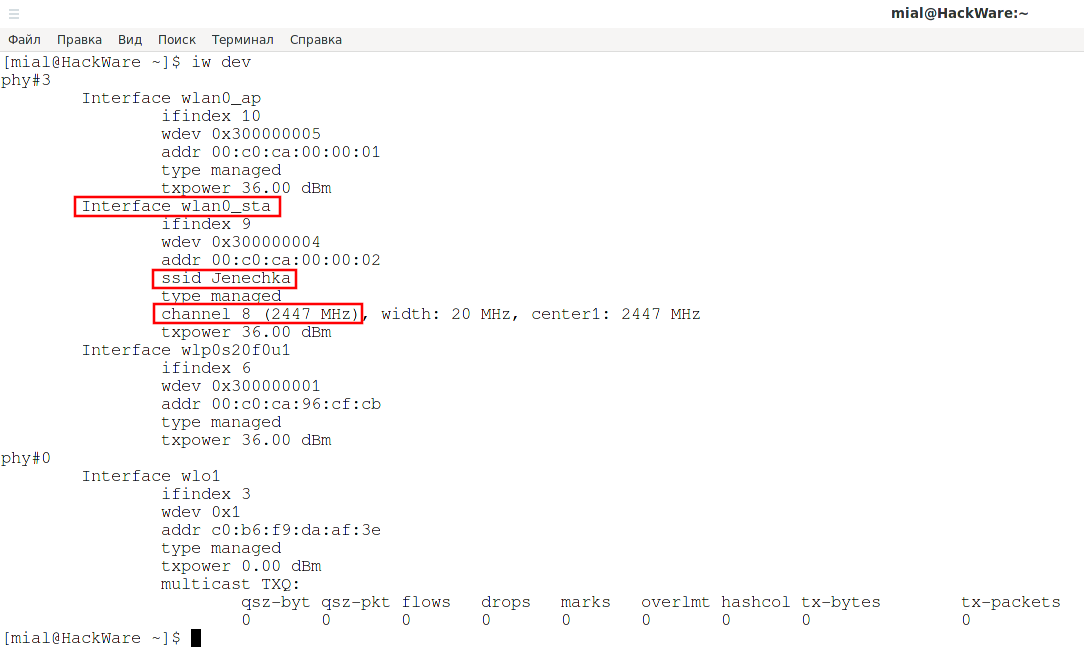 We see that the wlan0_sta interface is connected to the AP – this is what we need.

Very important – look at which channel the AP and the client are working on. This channel must be specified in the next command, otherwise nothing will work. In this case, they work on channel 8.

Everything worked out, and our Wi-Fi signal booster even has a connected client:

Commands for displaying the names of network interfaces

A small instruction manual for obtaining information about the network interfaces available in the system.

Output of wireless interfaces along with their PHY, driver and chipset information:

Output of everything that resembles network interfaces (along with virtual ones):

The following way you can see the names of the interfaces and equipment:

This is how you can display the names of interfaces other than virtual ones:

Please note that the interfaces created in this instruction are not considered virtual in this case, since they are tied to physical hardware.

Interface statistics can be viewed as follows: