See also: How to install Wi-Fi driver in Linux if the computer is offline

This post will show you how to fix the problem with Mediatek MT7921 and Mediatek MT7961 Wi-Fi adapters not working, which you can find in the latest laptop models, such as ASUS ROG G15 and Asus TUF Gaming A15 FX506L-HN004.

We need the mt76 driver, which provides the following chipsets (source): 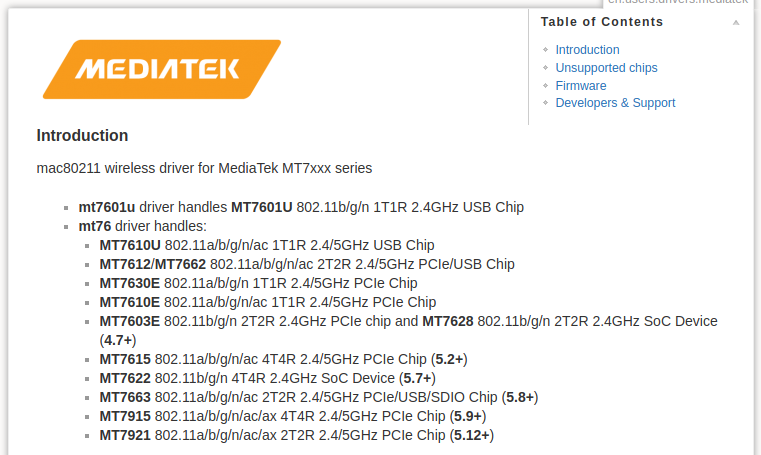 MT7961 is not included in this list, but the kernel module for MT7921 is responsible for its operation.

But the problem is that the Linux kernel from version 5.12 is relatively fresh and not as widespread in Linux distributions. For example, a preliminary version of the 5.15 kernel is already available at the time of writing, and the 5.14 kernel is already used in Arch Linux. But Ubuntu 21.04 uses the 5.11 kernel, so Linux Mint has an even older kernel. 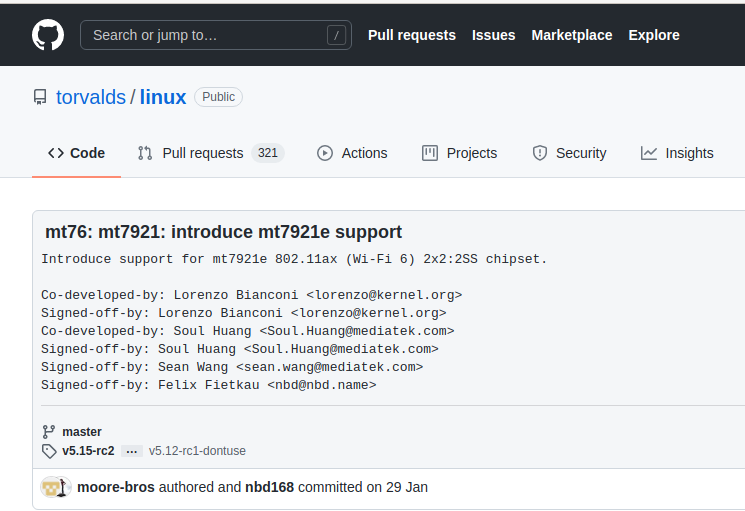 There are 2 ways out of this situation:

So, you need to install kernel 5.12 or later – how to do this depends on your particular distribution. This tutorial will show you how to install the latest kernel in:

If you already have a fresh kernel 5.12 or newer installed, but Wi-Fi adapters or Bluetooth are working with problems, then this section is for you.

The Mediatek MT7921 and Mediatek MT7961 chipsets require firmware, which, although available in the standard distribution repositories, is usually not installed by default.

On Ubuntu, Linux Mint and derivatives, run the following command:

On Arch Linux, Manjaro, BlackArch and their derivatives, run the command:

All subsequent sections show you how to update your kernel to the latest version. It should be remembered that due to the incompatibility of the kernel with programs (first of all, with proprietary drivers), you may encounter problems, including a black screen during boot.

In most cases, the problems encountered can be resolved without reinstalling the distribution. Start by going to the advanced options in the boot menu and boot with the previous version of the kernel. After completing the boot, remove the problematic kernel.

Proprietary graphics card drivers can cause problems, as older versions may not be compatible with the latest kernels without a patch. If you have proprietary video drivers installed, then seriously consider before following the instructions below. Also get ready, look for instructions on how to solve the problem when loading the distribution into a black screen.

Owners of old distributions should be especially careful – it is strongly recommended to update the kernel only on the latest OS versions.

This instruction has been tested on distributions:

Another very likely problem that you may encounter if you install the latest kernel is the problem with unresolved dependencies and, as a result, the inability to use the apt package manager to update and install programs. If you are faced with a situation where, after successfully installing a new kernel, you cannot update packages using apt, then try installing the previous versions of the kernel that suit you, and uninstall the versions that cause dependency problems. Remember that it is impossible to remove the kernel you booted with – boot your computer with any other version of the kernel before uninstalling.

Related: How to Install the Latest Linux Kernels on Ubuntu and Linux Mint

For Ubuntu, there is a repository of compiled kernels of all versions, including the most recent, so installation is not particularly difficult - you do not need to compile the Linux kernel. Moreover, there are tools, including those with a graphical interface, to install any kernels.

Since Linux Mint is based on Ubuntu, this guide is fully applicable to Linux Mint distributions, except for LMDE. For LMDE (Linux Mint Debian Edition) see the following section on Debian and derivatives, respectively.

If you prefer a graphical interface then use Mainline:

In this tutorial, I will show you how to install the latest kernel on Ubuntu 21.04 using the ubuntu-mainline-kernel.sh command line utility.

We check which version of the kernel is the latest:

To display a list of available kernels versions for installation, run the command:

For example, we want to install the kernel version v5.12.11, then the command is as follows (you do not need to specify the “v” prefix):

Attention: tests have shown that to solve the problem with the Mediatek MT7921 (Mediatek MT7961) drivers, it is recommended to install the kernel version 5.12.11, since the 5.14 kernel, although it installs normally, subsequently brings problems with unresolved dependencies when using the apt package manager.

If you want to install the latest version at the moment, then run the following command:

You will be asked if you want to continue, type “y”:

The program has exited – a restart is required for the changes to take effect.

By default, your system will boot with the latest kernel, if you want to change this, then go to advanced boot options

and select the version you want from the installed kernels.

The same instruction was tested on Linux Mint 20.2.

As you can see, the kernel has been updated successfully and Linux Mint is running.

Related: How to Install the Latest Linux Kernels on Debian and Debian Based Distributions

This section should be suitable for all variations and derivatives of Debian, for example:

In order not to compile the kernel from scratch, we will use the kernels of the XanMod Kernel project.

Wait for the update to complete and reboot.

If for some reason the GRUB menu has not been updated, then run the command:

By the way, you can choose the XanMod kernel version.

How to recover Linux after installing the kernel

If your computer boots with a black screen, freezes, or something doesn't work after updating the kernel, reboot and select Advanced options for your distribution from the GRUB menu:

Then select the previous kernel version and press Enter:

Regardless of the reason, you need to boot with the previous version of the kernel if you want to remove the latest kernel. This is because you cannot remove the kernel that is currently in use.

If you do not see the GRUB2 menu, press and hold the Shift key or press the Esc key repeatedly (this may vary depending on BIOS or UEFI boot and the version of Ubuntu/Linux Mint you are using) while booting GRUB. The Grub menu should appear allowing you to select a previous kernel version.

After booting the previous kernel, you can remove the faulty kernel. ubuntu-mainline-kernel.sh allows you to remove kernels installed from the Ubuntu kernel PPA.

With ubuntu-mainline-kernel.sh you can remove the kernel version by running:

Where VERSION is the kernel version, for example 5.14. You can also use this utility with -u without specifying a version, in which case the tool will list up to 10 kernel versions and ask you which one you want to remove. It's worth noting that ubuntu-mainline-kernel.sh will not show official Ubuntu kernels in this list.

To remove the XanMod kernel in Debian and derivatives run the commands:

If this was not done automatically, then update your GRUB settings: