What are meta-packages in Kali Linux for?

Meta-packages are empty packages that only describe dependencies. They facilitate the installation of a collaborative group of programs previously selected by the maintainer of the meta-package; thus the command

will automatically install all of these programs using the META-PACKAGE dependencies. The kali-desktop-gnome, kali-desktop-kde, and kali-linux-default packages are examples of meta-packages.

Meta-packages are used to install multiple packages at the same time, created as a list of dependencies on other packages. Kali Linux uses them in several ways. One way is to let users decide how many packages from the general Kali list they would like to install. Need to install packages just to run Linux itself? Do you want packages that are enough to run a penetration test in a specific area? Perhaps you want to install all the packages that Kali comes with? Meta-packages can help you with any of these tasks.

It is important to clearly distinguish between metapackages and virtual packages. The former are real packages (including real .deb files) whose sole purpose is to express dependencies.

Virtual packages, however, do not physically exist; they are only a means of identifying real packages based on common logical criteria (for example, services provided or compatibility with a standard program or an existing package). Sometimes virtual packages are used as short, handy, or commonly used aliases for real packages.

Desktop environments are full-fledged graphical shells like GNOME, Cinnamon, KDE, XFCE and others.

Window managers perform only some functions of the graphical interface, in fact, they only allow you to open several windows, add a desktop background, and can have a simple menu. Due to this simplicity, window managers consume a minimum of resources. But from the point of view of user convenience, they are inferior to a full-fledged desktop environment

All tools in Kali Linux are structured in menus and sub-menus. Menus are a convenient way to learn about a new tool, but practically useless from the point of view of running utilities, since most of them have a command line interface.

Meta-packages are also generated from these carefully sorted lists.

When installing a meta-package, the corresponding menu item will be created automatically, and relevant programs will also be automatically placed in it.

The meta-packages kali-linux, kali-desktop-common, as well as all metapackages of the form kali-linux-* have been renamed and the old names are no longer used. If you come across them, then you are reading an outdated source.

How to install a meta-package

To install any meta-package, use a command like this:

One or more meta-packages can be installed at a time.

How to see which programs are included in the meta-package

To find out which programs are included in the meta-package, use a command like:

Be aware that other meta-packages may be present in the output of this command! 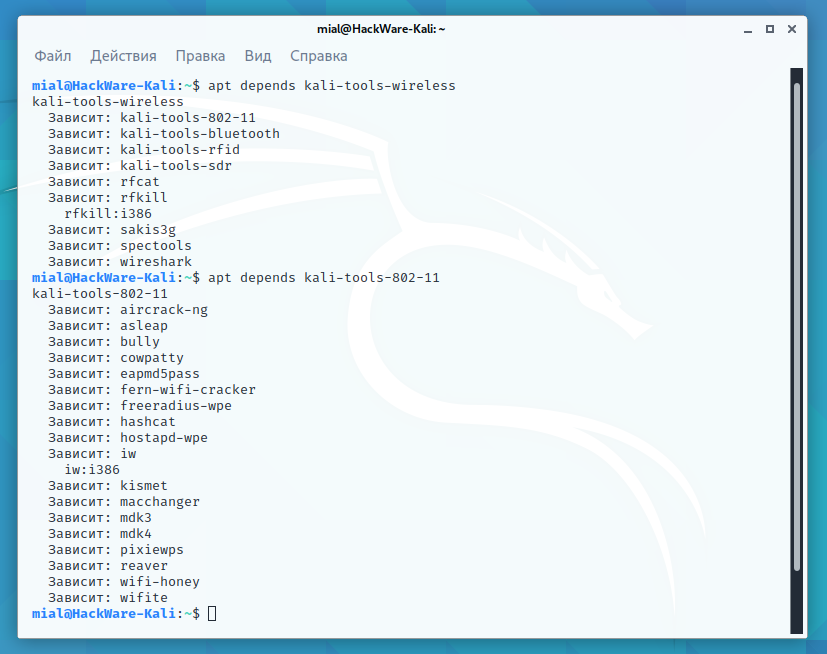 Another way to check which programs make up the meta-package is to visit https://tools.kali.org/kali-metapackages, which lists the available meta-packages and shows the programs included in them.

By default, no Kali Linux tools are included in the WSL image. This is done to keep the image as small as possible. Optionally, you can install any tool from the Kali Linux repository or use the meta-packages.

You can set the tool categories you need using the meta-packages described above.

For example, a set with the most popular tools for most users

The easiest way to get most of the tools is to install the kali-linux-large metapackage with the following command:

In WSL, you don't need tools from the following meta-packages (due to lack of access to hardware):

Making your own Kali Linux Metapackages

You can create and use your own metapackages to deploy the right environment for you. See “Making your own Kali Linux Metapackages” for details.