Description of the problem: airodump-ng and similar programs for auditing Wi-Fi security do not capture data in monitor mode when using a Wi-Fi adapter with Qualcomm Atheros QCA9377 chipset.

This problem is discussed on the forum in these threads:

That is, monitor mode works, but the wireless adapter does not capture anything.

But the problem appears when using firmware-6 on Kali versions released in 2020 and 2019. The user used firmware-5 from 2018 and everything started working as it should.

This user has extracted the fifth version of the firmware and uploaded it to GitHub.

Now if in Kali Linux you check the contents of the firmware folder for the Atheros QCA9377:

You can see that there are both the fifth and sixth versions: 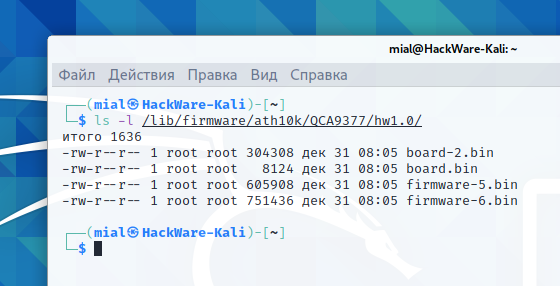 Therefore, you can try to uninstall the sixth version. And if that doesn't help, then download the version from GitHub.

Be sure to start by creating a backup (in case something goes wrong):

For the changes to take effect, reboot:

Check with airodump or another program.

If this did not help, or if the fifth version is missing in your distribution, then download the version from the github:

Remove the firmware (it is assumed that you have already made a backup as shown above):

Copy the downloaded fifth version to the place where it should be on the system:

For the changes to take effect, reboot:

Data capture should now work in airodump and other programs.

Users confirm that any of the described methods works.