A new attack on Wi-Fi without Clients

There are a lot of various attacks on Wi-Fi. The most universal attack (working on almost all access points) is the attack on WPA/WPA2 technology, because it is used in the vast majority of wireless access points. When a Client connects to a WPA/WPA2-enabled Access Point, EAPOL, security protocol, is used during which a step-by-step data exchange is performed between an Access Point and a Client that wants to connect. The essence of the attack lies in the fact that it is necessary to capture completely (or at least part) the transmitted data and find the appropriate password by brute-force. Simply put, you first need to capture a handshake (in the EAPOL phase), and then use brute-force attack to find the correct password.

At each of these two stages there may be difficulties: problems with capturing a handshake can be caused by a variety of reasons, the most fatal of them is the absense of Clients. That is, if there are no connecting clients, then EAPOL protocol is not used, so there is nothing to intercept.

At the hashcat.net forum (topic https://hashcat.net/forum/thread-7717.html), a new method we found that allows you to get the data necessary for brute-force without having to capture a handshake. This new technique allows you to attack Wi-Fi passwords - WPA/WPA2 PSK (Pre-Shared Key).

Wi-Fi technology uses variety implementations and many related technologies and solutions. Therefore, the method described here can work in not all cases - it depends on a vendor and its implementation features. In addition success may depend on the chip of your Wi-Fi adapter.

Further a little theoretical information from the forum, and then an example of a real successful attack according to this technology.

This attack was discovered accidentally while looking for new ways to attack the new WPA3 security standard. WPA3 will be much harder to attack because of its modern key establishment protocol called "Simultaneous Authentication of Equals" (SAE).

It is not reported whether a new way of attacking WPA3 was found, but for WPA/WPA2 PSK a new attack was invented, and the necessary tools were also prepared. The main difference from existing attacks is that in this attack, capture of a full EAPOL 4-way handshake is not required. The new attack is performed on the RSN IE (Robust Security Network Information Element) of a single (the first) EAPOL frame.

At this time, we do not know for which vendors or for how many routers this technique will work, but the authors think it will work against all 802.11i/p/q/r networks with roaming functions enabled (most modern routers).

And in the list there is 802.11q - this standard is not used, the designation is reserved, the authors added it to this list for fun - to look at those who copy-paste texts without any verification.

The main advantages of this attack are as follow:

The RSN IE is an optional field that can be found in 802.11 management frames. One of the RSN capabilities is the PMKID.

Example RSN PMKID in the first message of a handshake: 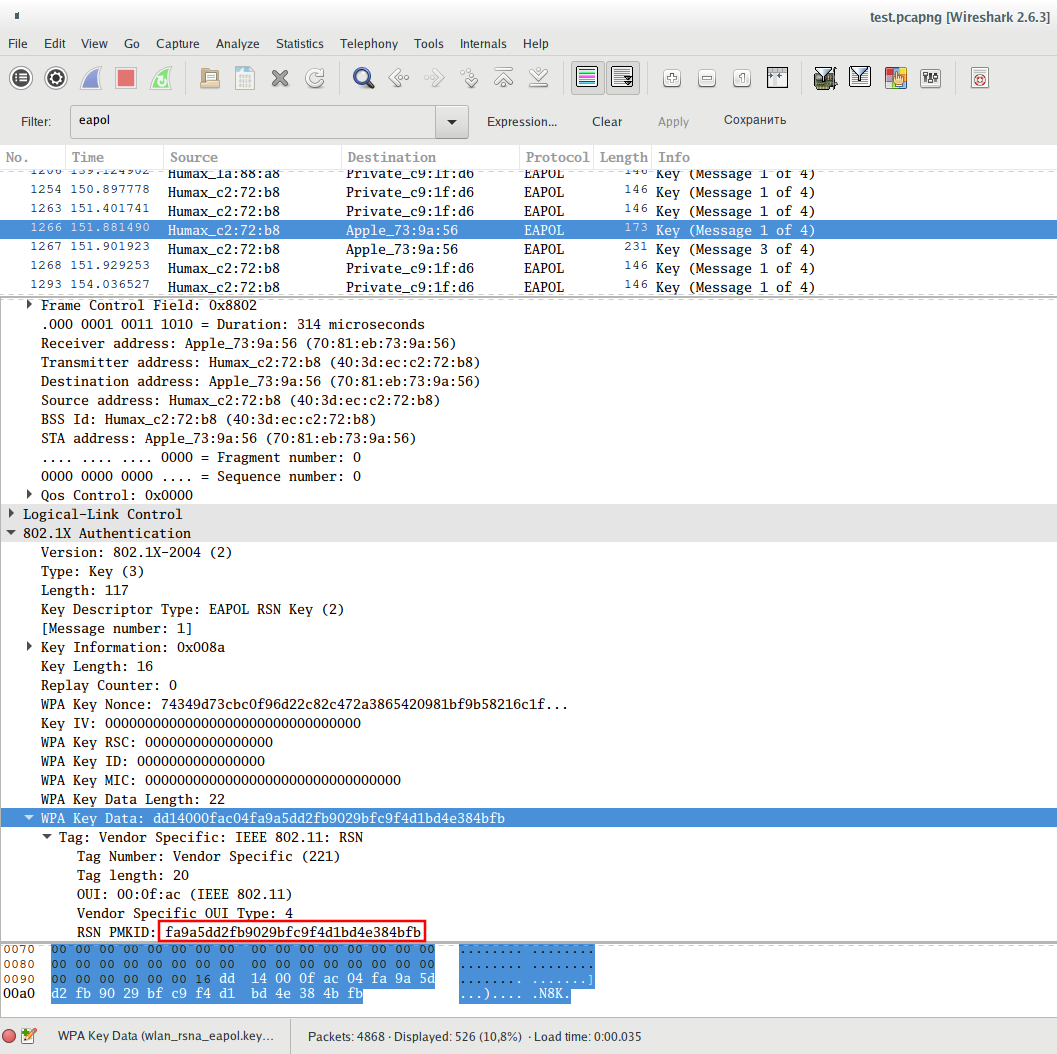 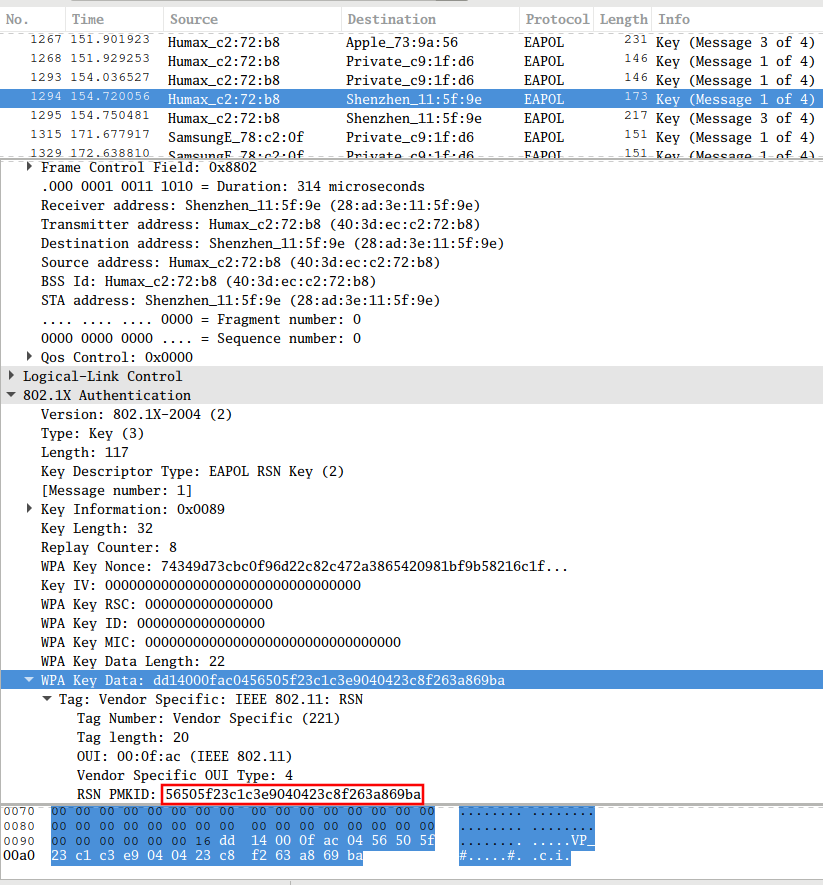 Even one more example: 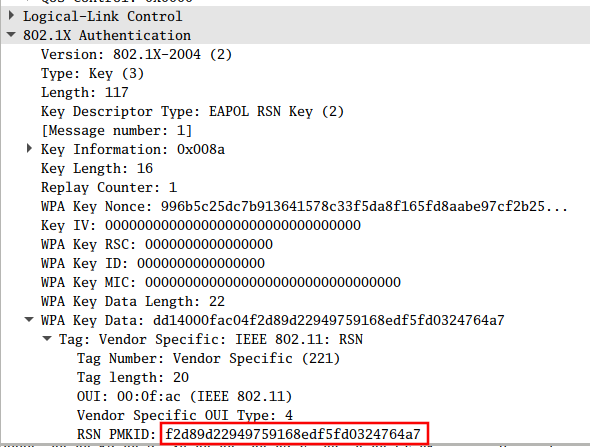 The PMKID is computed by using HMAC-SHA1 where the key is the PMK and the data part is the concatenation of a fixed string label "PMK Name", the access point's MAC address and the station's MAC address.

The calculation formula is as follows:

Since the PMK is the same as in a regular EAPOL 4-way handshake this is an ideal attacking vector.

We receive all the data we need in the first EAPOL frame from the AP.

Programs for attack Wi-Fi without Clients in Kali Linux

For this attack, you need three programs:

It is quite simply to install hcxdumptool and hcxtools in Kali Linux:

Programs for attack Wi-Fi without Clients in BlackArch

hcxdumptool and hcxtools in this distribution are present in the repository, so they are installed with one command:

How to install Hashcat in Arch Linux/BlackArch is explained here.

An example of a “client-less” attack on Wi-Fi

Let's start with the following command:

With this command, we get a list of wlan interfaces:

They mean that the programs NetworkManager and wpa_supplicant with process IDs 578 and 1190 are running at the moment. It is highly recommended stopping these programs. This can be done with the kill command, after which specify the pid of processes (change the digits to your values):

In theory, you do not need to set the Wi-Fi adapter to monitor mode - hcxdumptool should do it for you, but if the next command arises messages:

then set the wireless interface into monitor mode manually with commands of the form:

For example, I want to use the interface wlp0s20f0u1, then my commands look like this:

Run hcxdumptool to request the PMKID from the AP and to dump the received frames to a file (in pcapng format).

In the previous command:

If you want to attack a specific access point and you know the channel number on which it works, you can specify the -c option, in addition to the --filterlist option (which specify one address) and the option --filtermode=2, after which write the channel number of an AP.

If the AP receives our packet with an association request and supports sending the PMKID, we will see the message [FOUND PMKID]. That is, if [FOUND PMKID] appears, then we have successfully received the PMKID for the access point. 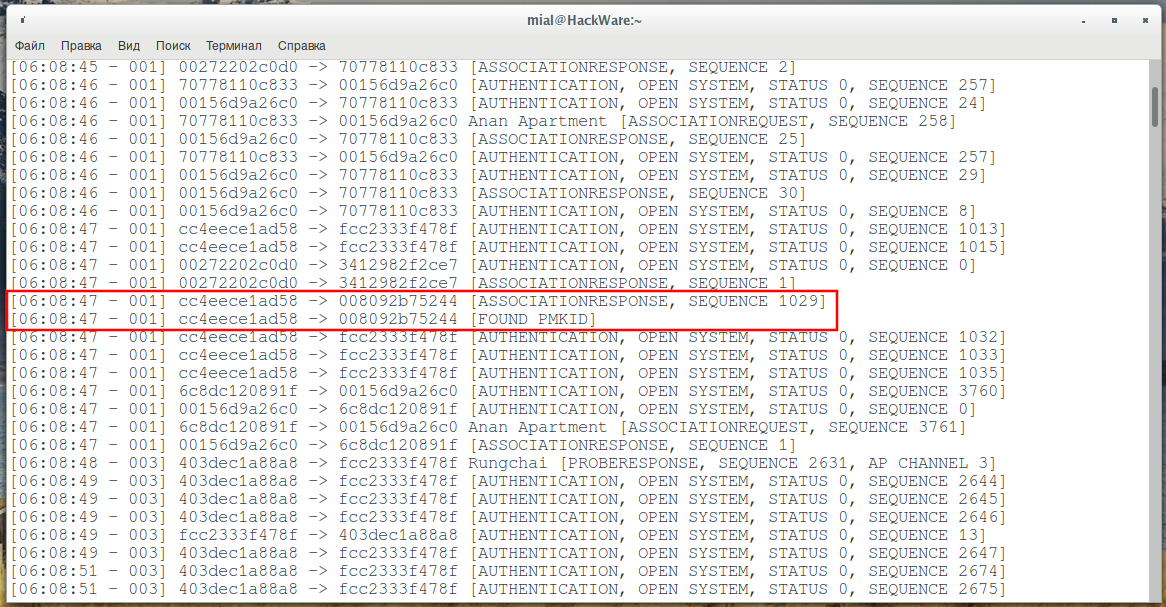 In addition, from time to time, summary data appears, including a powned string, for example, powned=6: 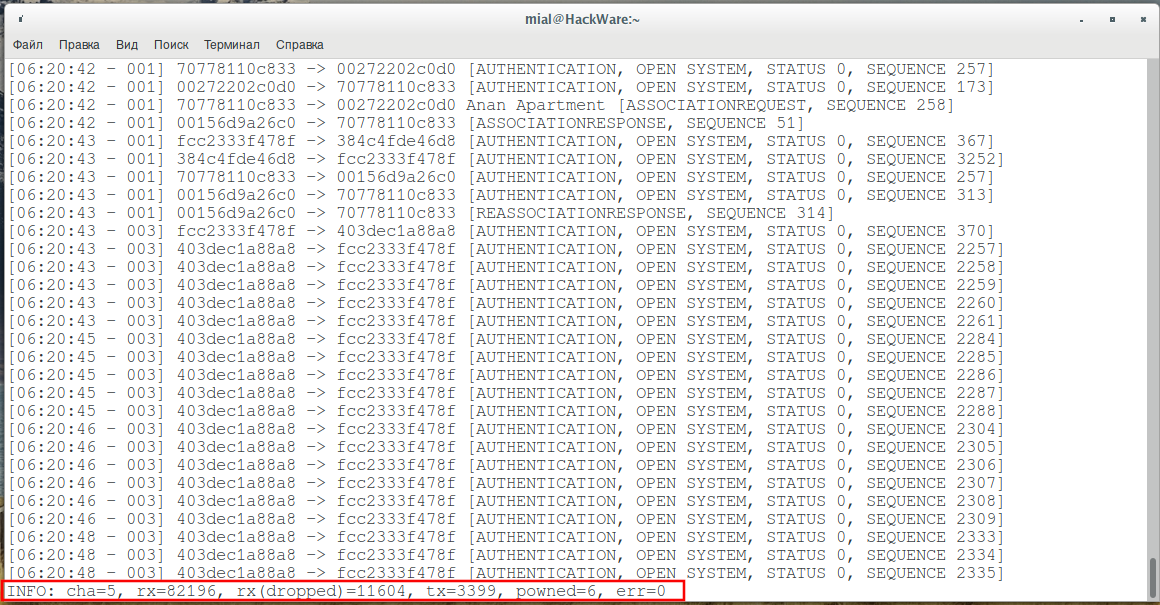 This means that data is captured for six (in my case) access points. This is not necessarily the PMKID - it also takes into account the usual handshakes (if the deauthentication attack was not previously disabled).

Depending on the noise level of the wifi channel, it may take some time to receive the PMKID. The authors recommend running hcxdumptool up to 10 minutes. Data collection can work any time, usually 10 minutes is more than enough. To stop the capture, just press Ctrl+c.

Now run hcxpcaptool to convert the captured data from the pcapng format to a hash format that hashcat accepts: 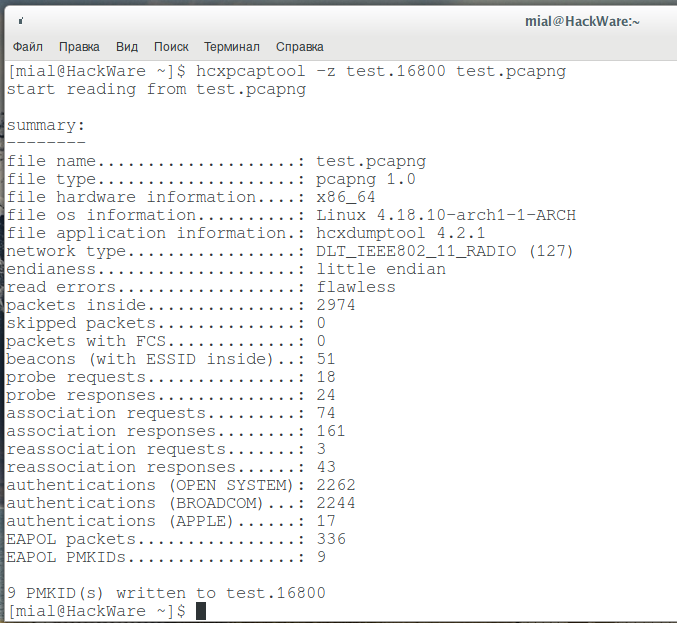 A hash file is just a text file, you can open it with any text editor and examine it:

The contents of my file:

It seems that nothing is clear? In fact, everything is quite simple. The most interesting part of the hash for us is the one that follows the last asterisk. It contains the name of the Access Point in hexadecimal form. To decode this name into a normal form, use the following command:

To show the names of all access points for which data is captured, use the command:

If necessary, replace the test.16800 file name with another one.

The columns are the following (all hex encoded):

While not required it is recommended to use options -E, -I, and -U with hcxpcaptool. We can use these files to feed hashcat. They typically produce good results.

The command along with these options:

New essidlist (mostly consisting of Access Point names, but there may be other very interesting strings), identitylist and usernamelist files may appear. Some files may not appear if nothing is found.

Now we can lunch brute-force.

You can start dictionary attack or mask attack. You can attack all hashes in the file as well as separate ones.

For example, if I want to attack all hashes by dictionary attack, my command is as follows:

For a mask attack, use the following command:

If the password is found, it will be displayed, and also saved in the file temp_cracked.txt or temp2_cracked.txt.

In this case, the records will have approximately the following form:

That is, this is the original hash, after which a password is added in clear form through the colon. In this case, the password 00001777, in order to decode the name of the access point, the already familiar construction is used:

The results of the attack:

The first dictionary attack did not succeed. But the second mask attack hacked 2 of 9 passwords.

This attack is an excellent addition to the already existing ones. With the help of it there is a real chance to get a password from completely “hopeless” Access Points (without clients and with disabled WPS).

6 Comments to Hacking Wi-Fi without users