In the article “How to identify hash types” we have already got acquainted with such utilities as hashID and HashTag, which determine the hash string by which algorithm it was calculated.

The aforementioned tools still work, but the world does not stand still (and the development of these programs does stand still). Now there are new types of hashes that are not supported or have errors in these tools.

Right now, at the time of writing, two new programs are under active development for identifying hash types. They support more hashing algorithms and are just better than the old tools in everything. This article is devoted to acquaintance with new tools for identifying a hash type.

Why do we need new tools for identifying hash types?

hashID has been deprecated since March 2015, hash-identifier has been deprecated since 2011, Dagon since June 2018, and findmyhash since 2011. All of them do not have at all, or have incorrect, erroneous support for modern hashes such as Keccak/SHA3/Blake2, etc. Also, a tool like hash-identifier, which is completely interactive, has no parameters and is not convenient for use in scripts. findmyhash has a very limited set of detectable hashes. The most interesting tool is hashID (for identifying a hash), but since it hasn't been supported for over 5 years, problems and open PRs (Pull Requests) are piling up, bugs are not fixed, and some features are missing.

All this could have prompted the authors to create new tools with capabilities missing from their predecessors.

Let's look at a comparative table of tools for determining the type of hash:

If you need sample hashes for verifying instruments, see the section “Where to see examples of hashes”.

I selected several hashes for analysis:

Hashes must be enclosed in single quotes!

Hashes can include special characters that have a special meaning to the shell. This is especially important if you are using Linux. If you do not take this into account, the program for determining the hash type, although it will not report an error, will receive a string different from the one you thought you entered.

Moreover, even in double quotes, the shell treats some characters as special. So to avoid escaping them, put the entire hash in single quotes.

It is not necessary to quote hashes consisting only of letters and numbers, but I prefer to pass all hashes in single quotes.

HAITI (HAsh IdenTifIer) is a command line tool (and library) for identifying the type of a given hash. The library is especially good for scripting because you don't have to wrap the command line tool in a subprocess.

A complete list of program options and installation instructions can be found in the program card: https://en.kali.tools/?p=1567

Moreover, OPTIONS are not necessary, the default behavior of the program is very balanced and in most cases you will not want to change it with any additional parameters.

Among the output is the correct answer: SHA3-512

In the output, HC is an abbreviation for Hashcat, and subsequent digits (for example, 1700, 17600, and so on) are the mode numbers in this program.

JtR is short for John the Ripper, and the following lines are the name of the hash algorithms for cracking in this program (raw-sha512, raw-sha3, and so on).

Color improves the readability of the output very well, especially if it is large. If you want to disable color output, then use the --no-color option:

Although often the output contains more than one guess about the hash type, salted algorithms are excluded by default. To show all possible hashing algorithms, including using a salt, use the -e or --extended option: 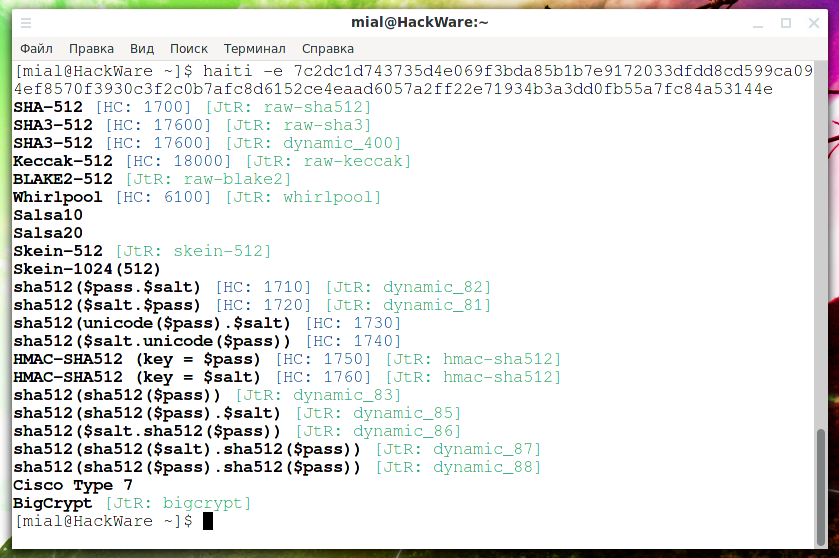 If you only want to know the hash type and information about hashcat and john the ripper modes is superfluous for you, then you can specify the --short option for shortened output:

From January 2021, almost two years after work on HAITI began, a project called Name-That-Hash emerged because the author needed a Python library for Ciphey. There are now two relevant options for identifying a hash.

Name That Hash defines the type of hash. The program supports MD5, SHA256 and over 300 other hashes.

Features of Name That Hash:

Installation instructions and a complete list of options can be found at https://en.kali.tools/?p=1556.

To determine the hash type, specify it with the -t (--text) option: 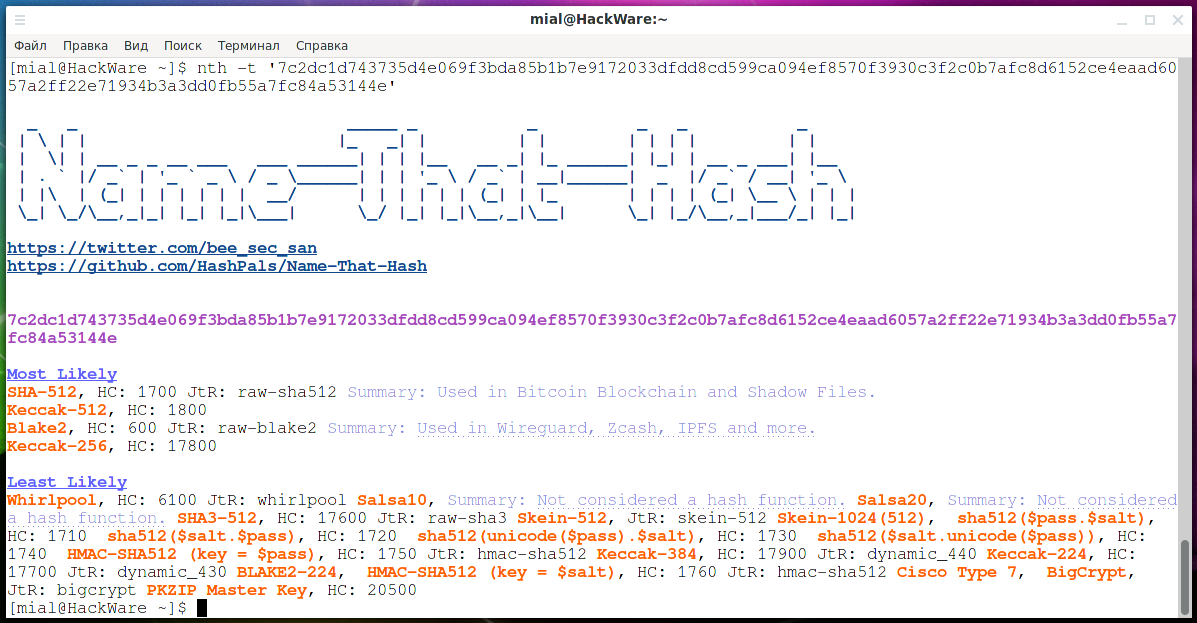 Hashes are divided into two groups:

Moreover, in these groups, they are also sorted by frequency of use.

In the output, you can see the already familiar HC and JtR strings with the numbers and names of hashing algorithms in Hashcat and John.

In addition, there is a short description of the application, for example:

Moreover, please note that some entries are hyperlinks (they are underlined with dots) and for more information you can go to web pages. All this is done so that you can navigate the proposed hash types and choose the most suitable one.

To check multiple hashes, use the -f (--file) option:

The file format is one hash per line.

One of these options (-t or -f) is required.

If your hashes are Base64 encoded, then use the -b64 (--base64) option. It tells the program to decode Base64 hashes before identifying. For files with mixed Base64 strings and in plain text, the program first tries to decode base64, and if this fails, then it treats the hash as an ordinary plain text string.

Please note that the already decoded string is shown as a hash (after the header). 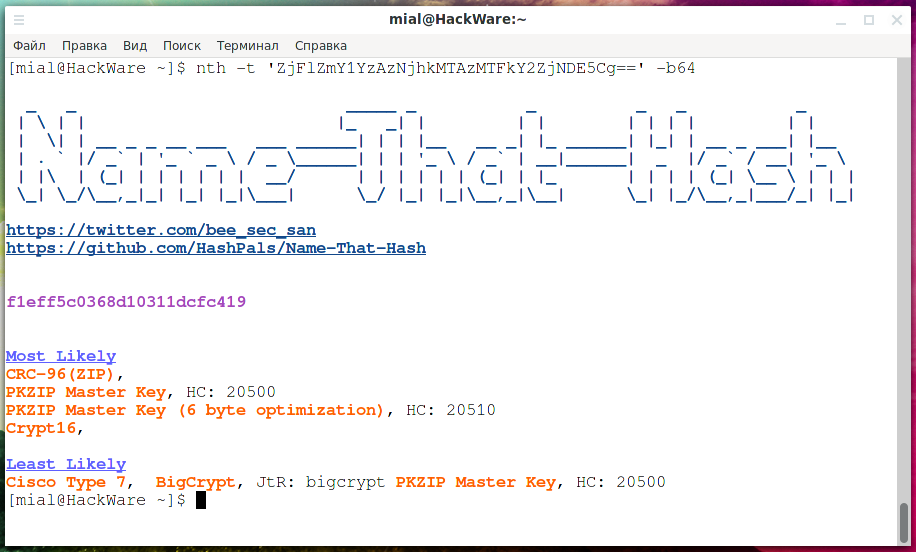 In theory, the following two commands should give the same result:

But they turned out differently for me. Therefore, use this mode rather as an experimental one.

The Online hash type detection service has existed for a long time. It works very simply – you enter a hash and you get a hash type. Previously, it relied on the hashID and HashTag utilities. Now the service has been updated and works with the HAITI and Name That Hash utilities – the most up-to-date tools for determining the type of hash.

As you can see, it is difficult to choose which of the programs is better – HAITI or Name That Hash. You can use one or two. Or if you need JSON output or need API support or a library for defining hashes, then you can choose the one that best suits your needs.