How to check WordPress sites for vulnerabilities (WPScan)

What is specific in vulnerability search on web sites powered by WordPress?

Every web site, using popular content management systems, such as WordPress, has basically the same source code (scripts). This code has already been tested many times. Therefore, using general-purpose scanners for searching, for example, SQL injection, XSS and other popular vulnerabilities in WordPress, is unlikely to give results, as it has already been done many times before us.

Nevertheless, security researchers regularly find vulnerabilities in both the main WordPress code, and in its numerous plug-ins, the themes of the design. This means that you do not need to scan WordPress by general-purpose vulnerability scanner, instead you should use a specialized program.

The best program for scanning WordPress is WPScan. This tool is able to determine the version of WordPress, as well as what plug-ins and themes are used, which versions. WPScan has an extensive and up-to-date vulnerability database of these plug-ins and themes. So by comparing the data obtained by scanning with this database, the program tells us about the vulnerabilities that are present on the site under investigation.

How to install WPScan

WPScan is preinstalled in Kali Linux and BlackArch. But if you do not use these operating systems, then you can install WPScan on Linux Mint or in Ubuntu. To do this, run the following commands:

How to use WPScan

You need to start with updating the database:

WPScan contains several options, you can see the full list on this page: https://en.kali.tools/?p=282

To set the target address, use the -u option, after which you need to specify the site to scan.

In addition, if you know the names of users, this information can be used for phishing attacks or for brute force (brute-force passwords).

Choosing which information we want to get (plug-ins, themes) is done by the -e flag. After it, you can specify additional options (note: they are used without a dash). These include: 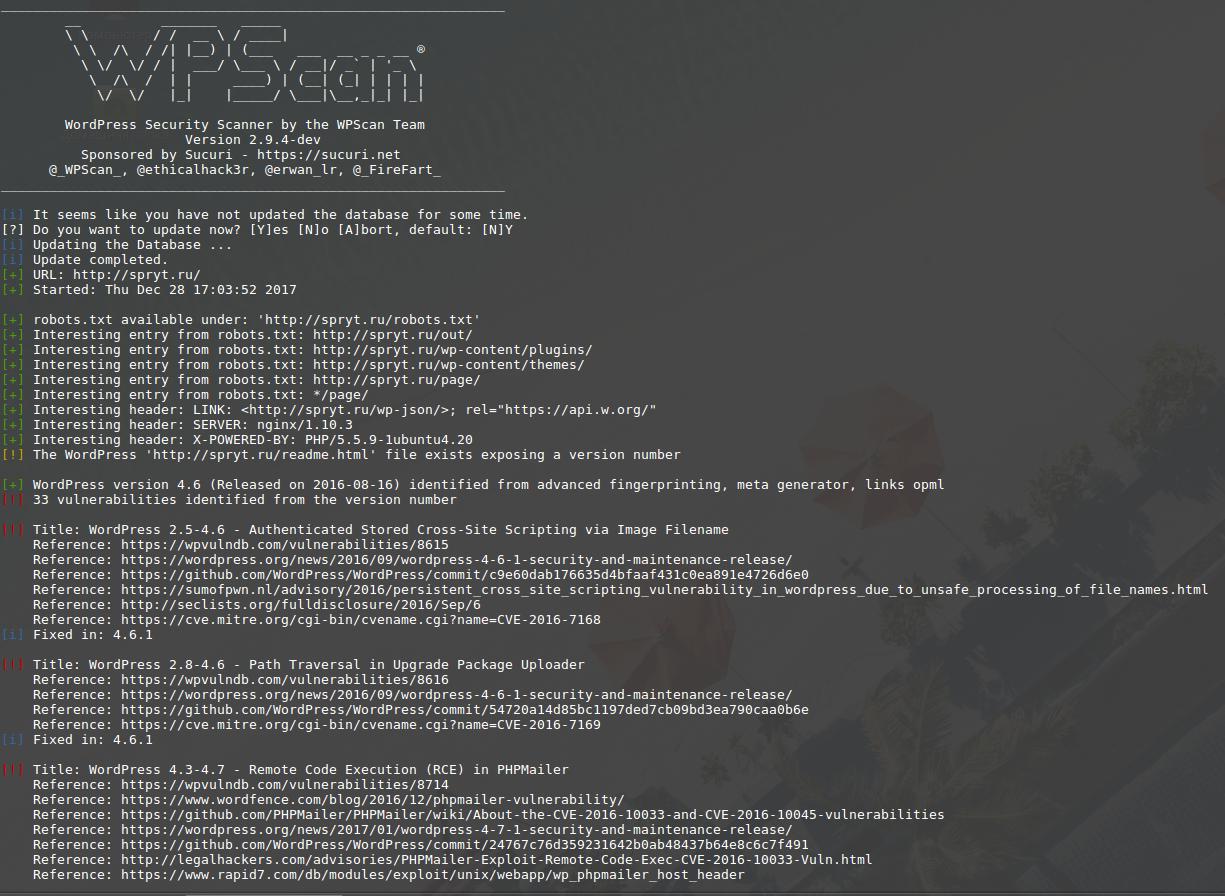 The report begins with a list of interesting records from the robots.txt file, interesting headers (can contain data about the server software) and the version of WordPress. 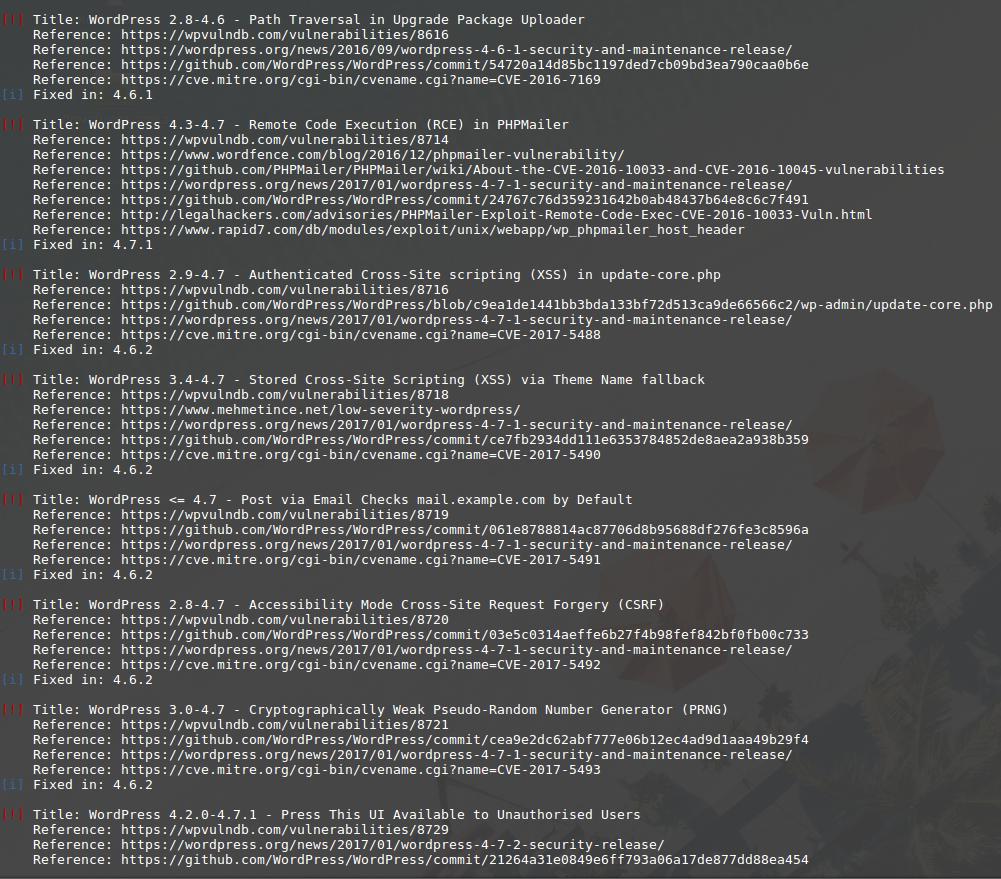 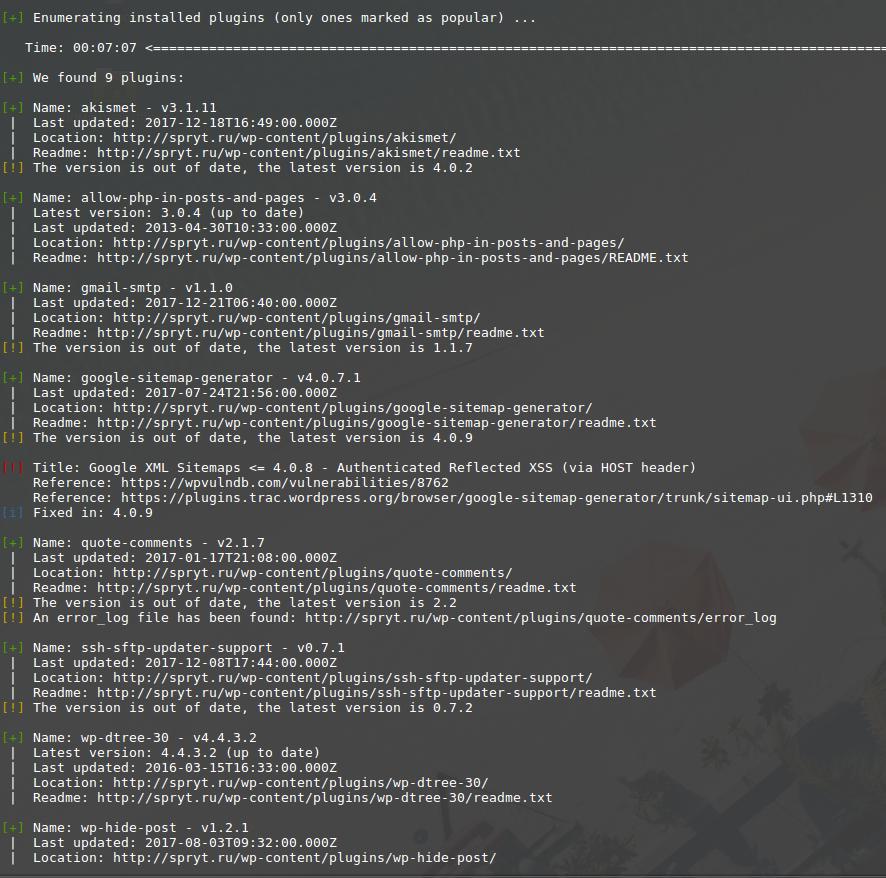 At the very end the names of users are shown to us: 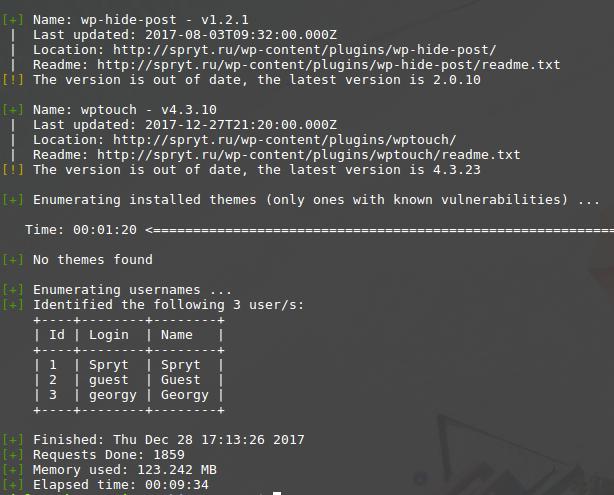 If you find a vulnerable plug-in or theme on your site, then update them as quickly as possible. If there are no updates for them, the best solution is to remove them as soon as possible.

WPScan does not work on Windows. Therefore, if you want to scan your site but can not cope with Linux, then you can use the following free online service for scanning WordPress with WPScan:. There you just enter the address of your site and wait for the scan to finish (10-20 minutes). 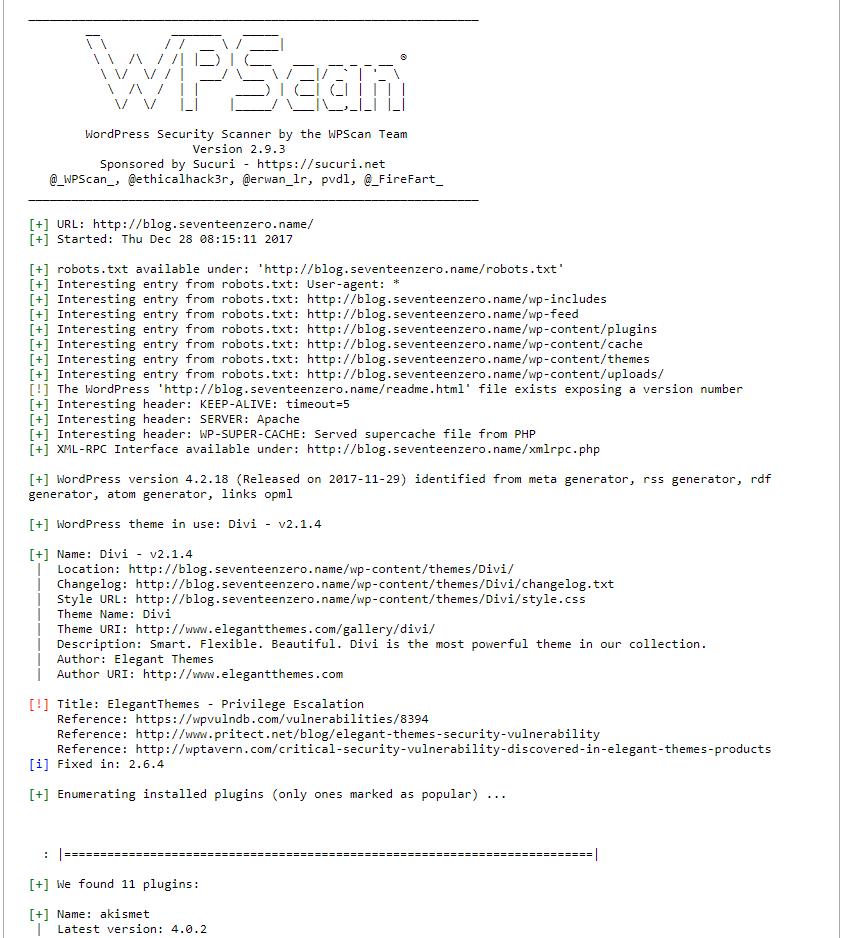 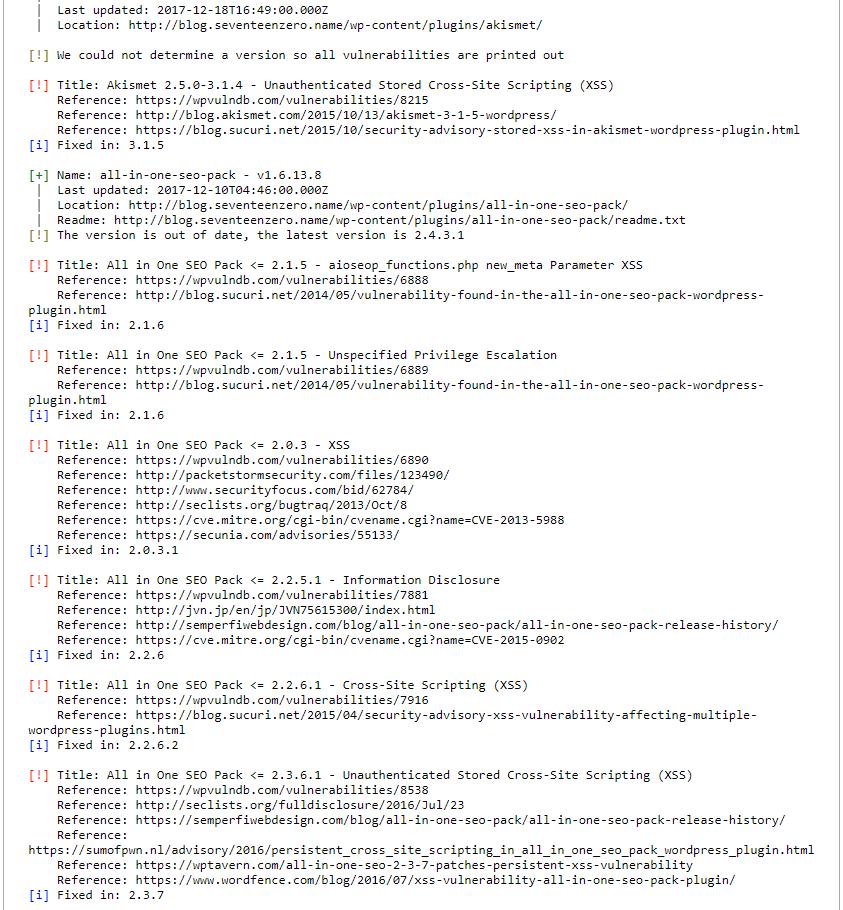 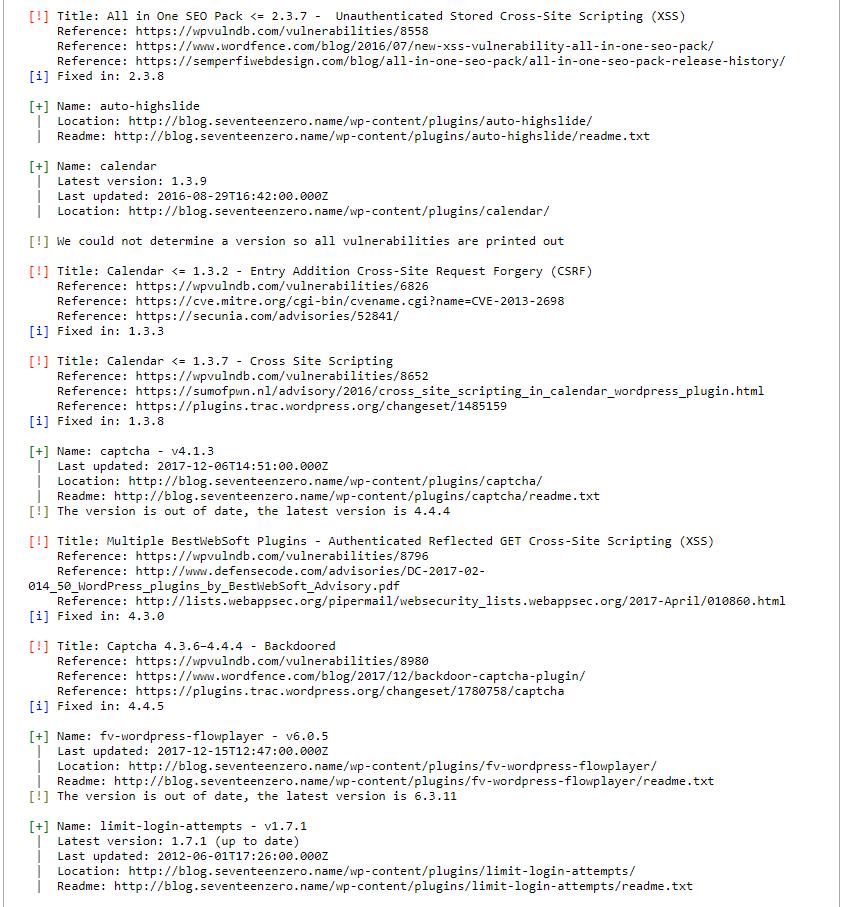 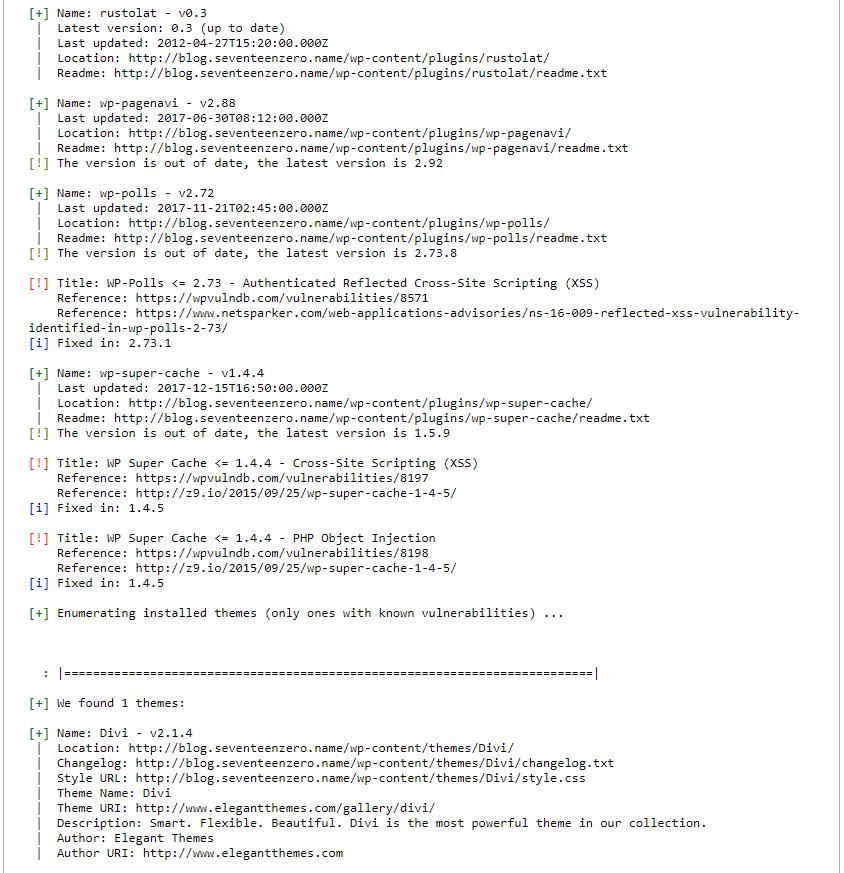