It is recommended to start with the first part entitled “How to find out the type of a file without an extension (in Windows and Linux)”.

Many files are concatenations of several files. For example, office document files .docx and .odt. You can replace the extension of such files with .zip, open with any archiver and make sure that in fact these are just containers containing many files. For example, if you inserted a picture into a Word document, then in order to extract this picture, it is not necessary to open the file in an office editor – you can change the extension, unpack the archive and take your picture back from it. Almost all firmware (for routers, IP cameras, phones) are containers. ISO images and filesystem images are also containers. Archives, as you might guess, also contain several files at once.

1. Files are stored unchanged, in their original form.

An example of such a combination of files is file systems without encryption and without compression. For example, EXT4, NTFS – they contain files in their original form. Accordingly, images of such file systems also belong to this group. This also includes some firmware, for example, for routers and IP cameras.

2. Files are processed according to a certain algorithm.

Examples of this way of combining files are file systems with encryption or compression (for example, Squashfs), archives with compression.

To search for individual files by their signatures, you must perform the opposite action, that is, if the file was compressed, you must unzip it. If it is a compressed filesystem, then you need to mount it.

Mounting, for example, an NTFS image will give us the following: we will be able to access the files of this file system in the way the developers intended, that is, we will see a list of files and will be able to access any of them without having to search for files by signatures. But at the same time, we will not be able to get or even find out about already deleted files.

Without mounting an NTFS image, we will be able to work with the files stored on it directly, that is, on the one hand, we will have to search for files by signatures, but on the other hand, we will even get access to remote files. Deleted files are available as a result of the fact that usually deletion on the HDD means that information about the file is simply deleted from the “journal” of the file system, but the file itself remains where it was (unless it was accidentally overwritten with another file later). As for the SSD, data is usually deleted there.

How to unpack camera firmware

Let's look at an example of unpacking the firmware of a Network Surveillance DVR r80x20-pq camera (I used this camera in tests, for example, in the article “IP camera security audit”.

Links to the firmware that I managed to find: https://download.xm030.cn/d/MDAwMDExNDI= and https://yadi.sk/d/LqvlLP-1u_z8cQ

Let's check what kind of file it is:

The conclusion is as follows:

That is, it is a Zip archive.

Let's check with Detect It Easy:

We will also use the Binwalk utility, which is specially designed for analyzing firmware:

Since this is just an archive, let's unpack it: 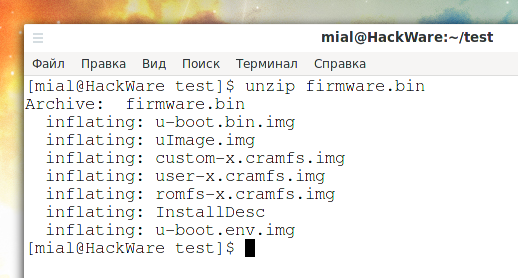 Apparently, the following images are part of the file system:

Let's take an interest in the user-x.cramfs.img file:

U-Boot is a boot loader for Embedded boards based on PowerPC, ARM, MIPS and several other processors, which can be installed in a boot ROM and used to initialize and test the hardware or to download and run application code. On your Linux, you can find packages uboot-tools (Arch Linux and derivatives) and u-boot-tools (Debian and derivatives) – these are tools and utilities for building firmware and performing other actions with them.

We get the error:

Let's turn to the Binwalk utility for help, which can find files and file systems even if they are not at the beginning:

Now everything has become clear – this image consists of two partitions. The first 64 bytes are occupied by the uImage header. And the Squashfs file system itself starts at 64 bytes.

We can extract the file system – how to do this in several ways will be shown below – but we can also still simply mount it, specifying the offset:

Let's look at the files located in the user-x.cramfs.img image:

I didn't find anything interesting in this image, let's unmount it:

Let's see where the filesystem starts in romfs-x.cramfs.img:

The hash of the default root user can be found here: 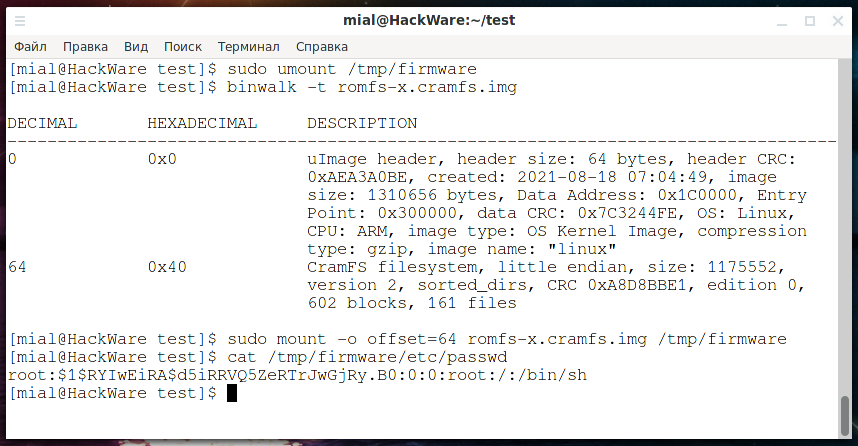 Likewise, by scanning with Binwalk and mounting file system partitions, you can look for interesting files.

How to separate partitions within a disk image (carving partitions)

As shown above, using the offset option, you can specify an offset and mount a file system that is part of the image and is not located at the very beginning:

If the image contains multiple filesystems, you may also need to specify the sizelimit option – the size of the filesystem:

Let's find the sections in the firmware: 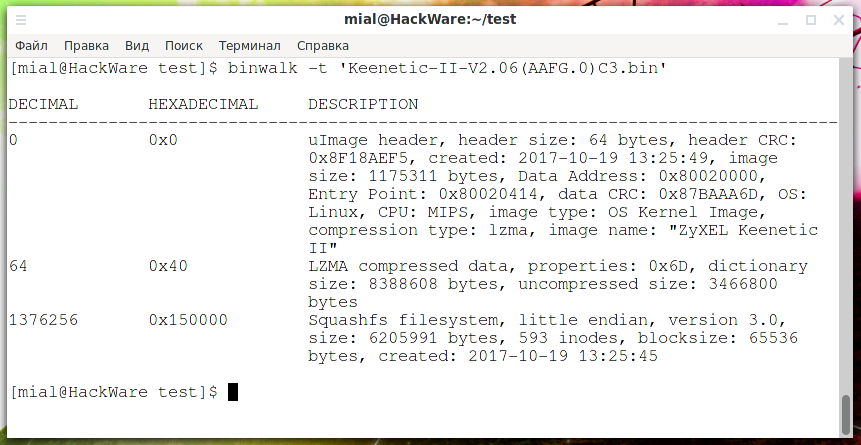 There are three areas in total:

To extract each of these sections, you can use a command like this:

For example, from the Keenetic-II-V2.06 (AAFG.0) C3.bin file I want to extract the first 64 bytes, then the command is as follows:

Now I want to extract the second partion starting at 64 bytes. This section ends at byte 1376256, but the count option of the dd command specifies how many bytes to read (not the fetch boundary), so count is calculated using the formula:

An LZMA file can be unpacked, for example, with 7z:

Basically, the command fetched the data, although it reported an error:

The essence of the error is that data was found after the end of the payload. We can say that this is normal (inevitable) in this case, since we did not know the exact size of the block and indicated as its end byte where another section begins. Another section starts with byte (in hexadecimal) 0x150000, so it can be assumed that for padding (alignment) between sections, the end of the partition was just “stuffed” by zeros. You can verify this by opening the data.lzma file in a hexadecimal editor, for example, in Bless: 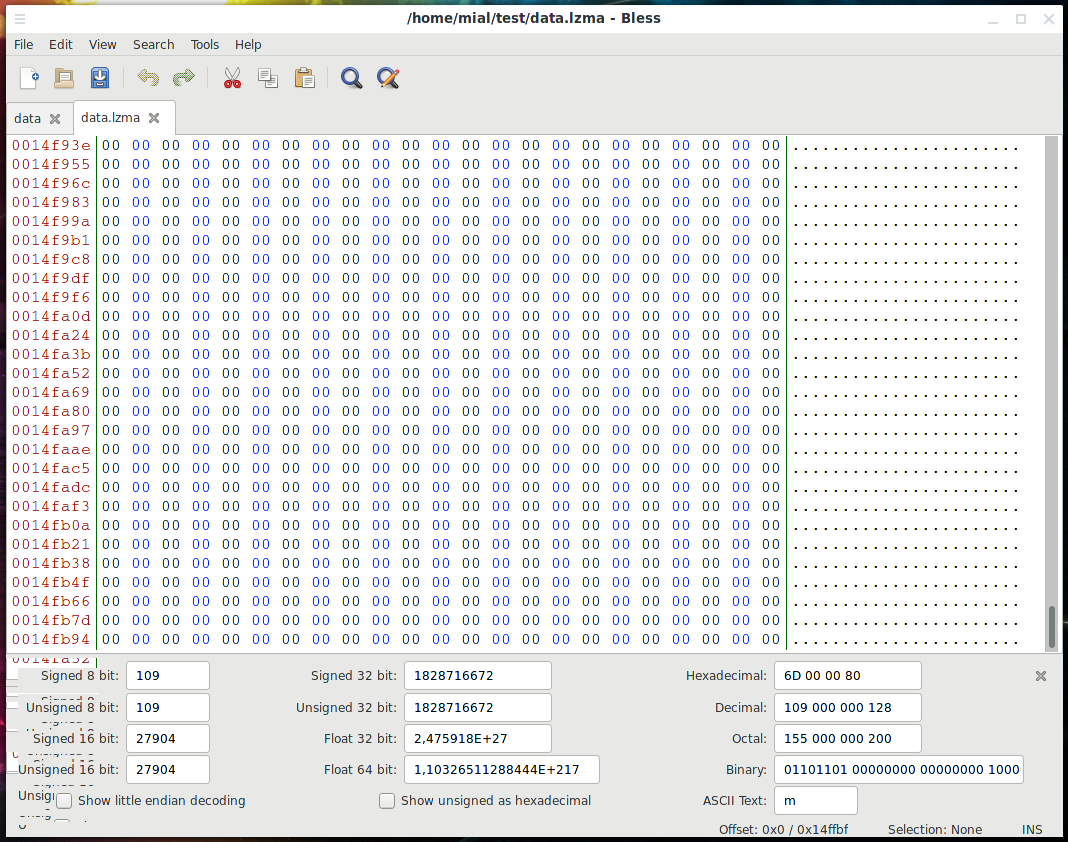 Yes, there are zeros at the end of this file – if the exact size is unknown, then it is better to write too much than to lose data.

But the firmware manufacturers still outwitted me by using Squashfs version 3.0 from 2006 and I could not open it for technical reasons: 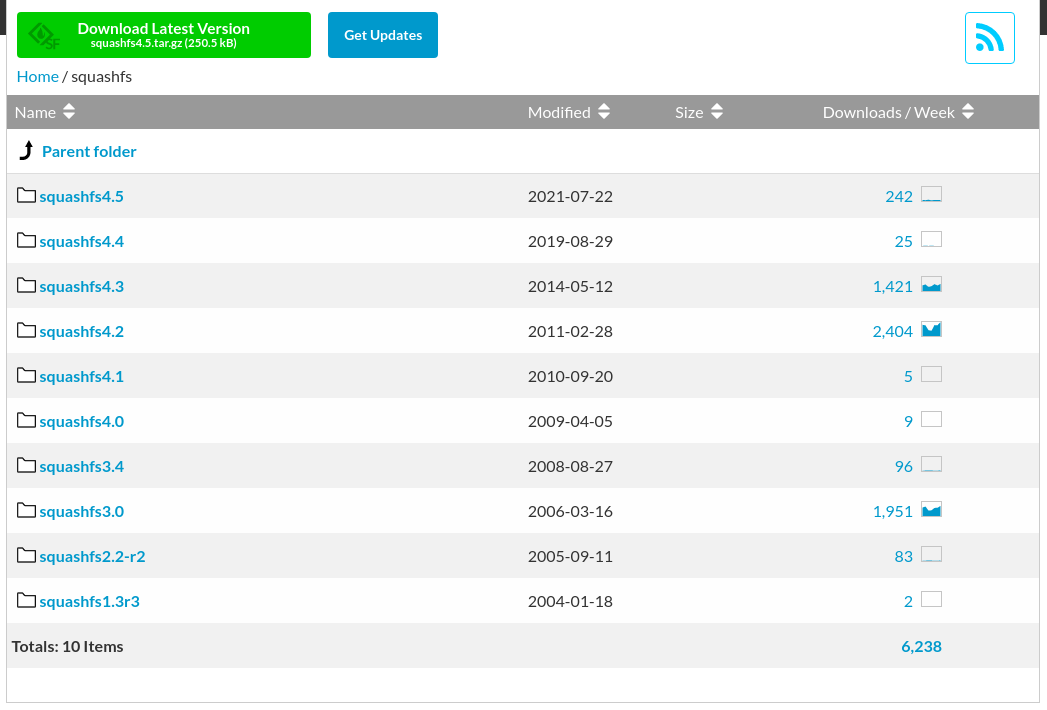 Binwalk has the following extraction options:

You can read a more detailed description of them in the program card https://en.kali.tools/?p=1634. It seems convenient to fetch the data automatically, but in practice the result will not be exactly what you expect. Since, even in manual mode, we do not always know the exact boundaries of partitions, the same applies to the specified options, which do not work well with partitions for which a specific size is not specified.

dd has improved versions of dc3dd and dcfldd. If desired, you can use them to extract file system partitions from a disk image.

Finding a sequence of bytes in a binary file

The file utility, Binwalk, and Detect It Easy use signatures to find data. These signatures are predefined in their databases (so called magic files).

If you need to search for your own signatures, that is, a string of binary data, then you can use Binwalk with the following options:

For example, looking for 53EF hex bytes in /mnt/disk_d/fs.ext4:

The sigfind program from the Sleuth package also allows you to search by signatures, while the program allows you to specify an offset from the beginning of a block (NOT a file). The program contains several signatures for searching for file systems, for example:

So, the methods shown allow you to find partitions of file systems even if they are not at the beginning of the image. For example, try to find the beginning of file systems in the images fs.ext4.xz, fs.ntfs.xz (from forensics-samples) without the tools listed here and you will once again see how much easier the analysis of firmware and compound files is made by the Binwalk program and others listed in this article.