How to install Pupy

More information about Pupy you will find here: https://en.kali.tools/?p=932

This is one of several articles about Pupy. In this one the installation is described step by step. The following articles will discuss the principles of the program, basic concepts, practical examples of use.

Those interested in this topic also recommend the article ‘Concealed control of a Windows-based computer’ dedicated to similar tools in Metasploit.

How to install Pupy in Kali Linux

The author of the program offers two installation options: directly to the system and using Docker.

This program has a bug (about it will be slightly lower) due to incompatibility with the latest version of one of the Python module. This bug leads to the fact that Pupy does not work in listen mode (it cannot accept connections). When using Docker, errors are not displayed on the screen and it is difficult to understand what the problem is. But much worse is that it is not clear how to fix the problem with the library in this container.

How to install Pupy on Kali Linux without Docker

To fix the error: 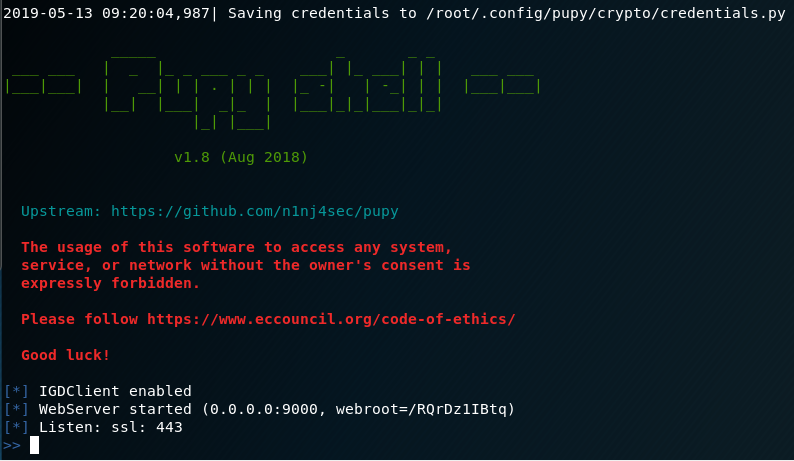 To install and run Docker, run the following commands:

Open the install.sh file and replace the line there:

Then run the commands:

To run the program:

Installation in BlackArch is as follows:

To fix the bug, you need to remove the new version of one of the Python packages, so that the system does not remove Pupy itself, for which this file is a mandatory dependency:

And install a version that does not cause problems:

But payloads, which I generated in BlackArch, do not to connect to the controlling computer…

When you run Pupy, see if the line is there:

If present, then there is a serious error. Details about this bug here: https://github.com/n1nj4sec/pupy/issues/622

The problem is that when the Victim’s computer tries to connect to the Attacker’s computer, the following error appears:

That is, the listening mode for the reverse shell in Pupy does not actually work.

The problem is solved by downgrading the version of the rpyc package to 3.4.4: