Over the years, it became apparent that the use of OpenVAS as a trademark for an open source project and funding for almost all of the project's development had not been appreciated from outside. Therefore, after the release of the OpenVAS 9 platform, it was renamed Greenbone Vulnerability Management (GVM) and released as Greenbone Source Edition (GSE). Since GVM 10, the term OpenVAS is used only for the scanner component, as it was at the beginning of the project.

If during the installation process you do not encounter the described errors, please write about it in the comments – if the errors do not appear for everyone, then I will put them at the very end of the article, due to which, in general, the instruction will become clearer.

How to install OpenVAS (GVM)

Since the authors renamed openvas to gvm (more precisely, divided it into different packages), now the main package is gvm, when it is installed, all other necessary packages will also be obtained as dependencies.

It is used in Greenbone Security Manager and is a full-fledged scan engine that performs constantly updated and expanded submissions of Network Vulnerability Tests (NVTs).

The scanner needs a running Redis server to temporarily store the collected information on the scanned hosts. Configuring the Redis server is done like this (these commands need to be executed once):

Starting the Redis server (must be done after every computer restart):

The Greenbone Vulnerability Management (gvmd) service acts as an OSP client to connect to and manage scanners. openvas does not act as an OSP service – you need the OSPD-OpenVAS module for that. Actual user interfaces (like GSA or GVM-Tools) will only interact with gvmd and/or ospd-openvas, not the scanner. You can run openvas to load plugins in Redis using the following command:

but ospd-openvas will update automatically.

Since openvas will be launched from the ospd-openvas process using sudo, the following configuration is required in the sudoers file:

Replace USERNAME with your Linux username.

You can find out the username with the command:

If something does not work, then you can view the log with the command:

It manages the storage of any vulnerability management configuration and scan results. Data, control commands, and workflows are accessed through the XML-based Greenbone Management Protocol (GMP). Scanners such as OpenVAS are controlled through the Open Scanner Protocol (OSP).

Deployment script (instead of openvas-setup):

This script needs to be run only once.

The script ended with an error:

also showed an error in the fourth step: 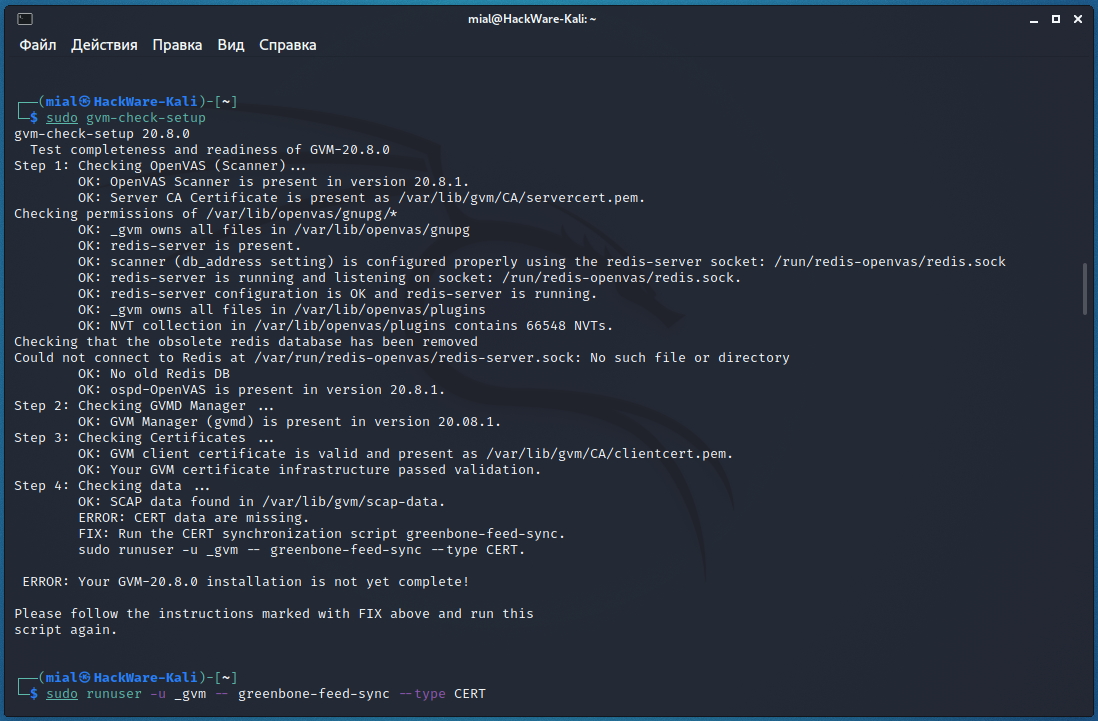 Re-running the check showed an error at the fifth step: 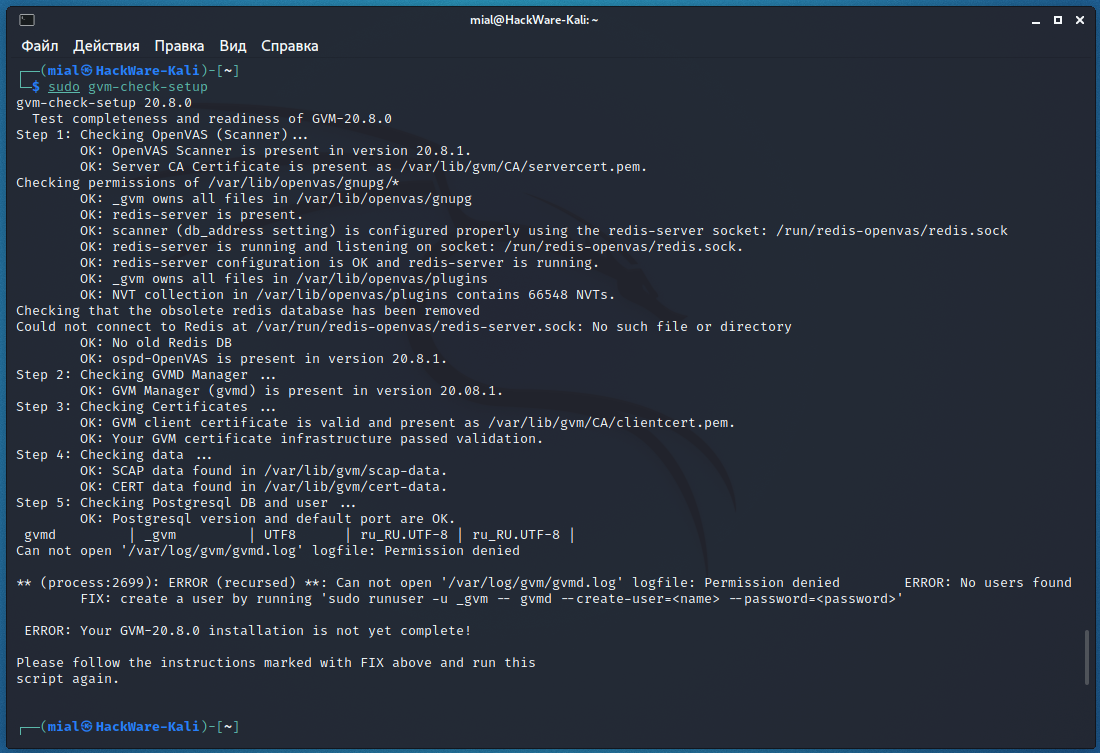 There are several errors at once, but the key one is “ERROR: No users found. You need to create at least one user to log in.”, To fix it, run a command like this:

For example, to create a user named mial and password 2:

The essence of the error is that the command does not have enough permissions to write to the /var/log/gvm/gvmd.log file, even though the previous command was run with sudo. To fix the error, run the following command:

And one more mistake at the seventh step: 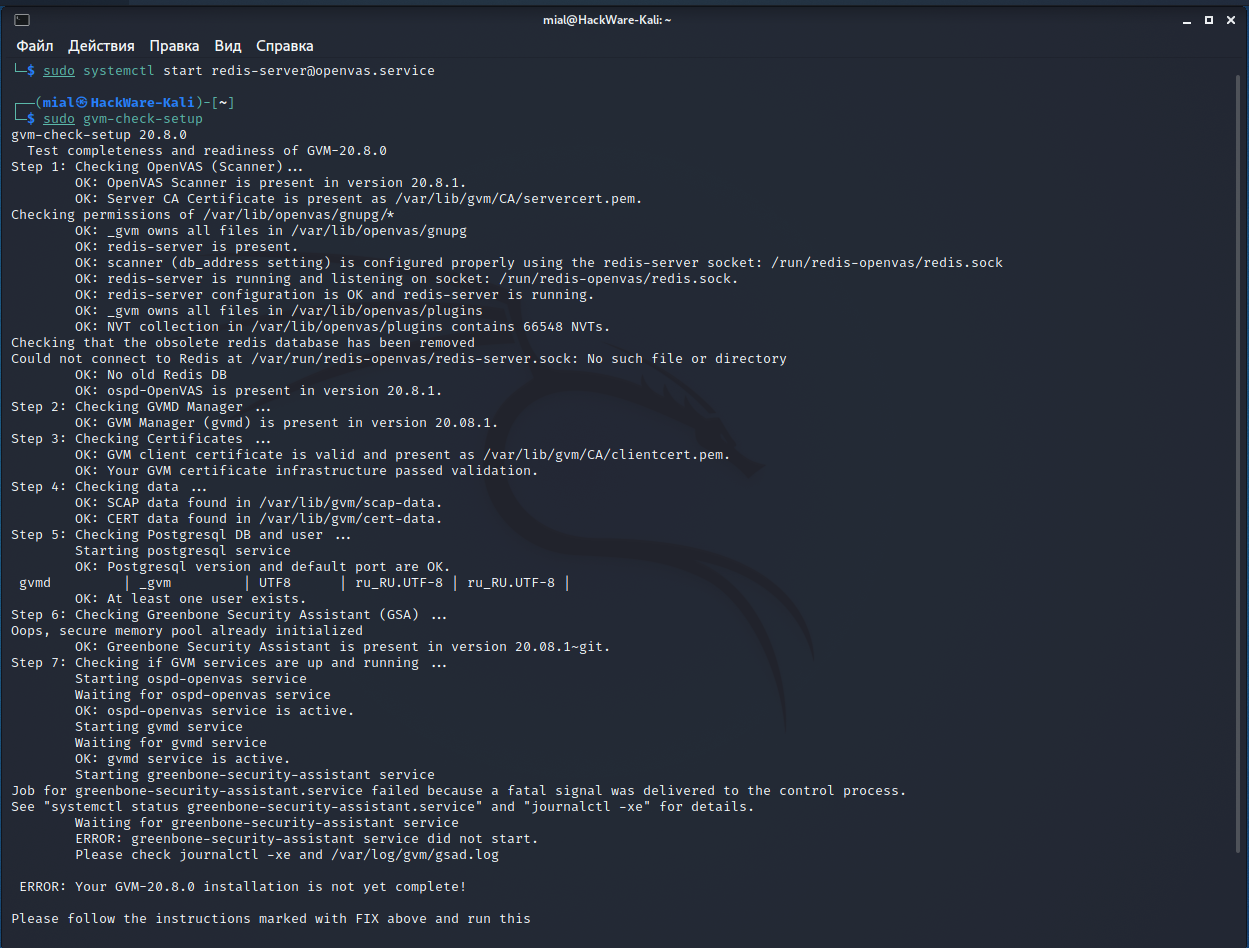 Let's move on to starting the necessary services.

Do not forget that before starting the service you need to start the Redis server, that is, type following before executing the primary command:

And we get the following:

The essence of the messages is that everything started fine, except for the greenbone-security-assistant, that is, gsa, that is, Web UI (Greenbone Security Assistant), that is, the web interface.

You can see the contents of the log file:

gsad has a --http-only option which only runs HTTP without HTTPS. Let's use it:

Again, the next message will be displayed that something is wrong: 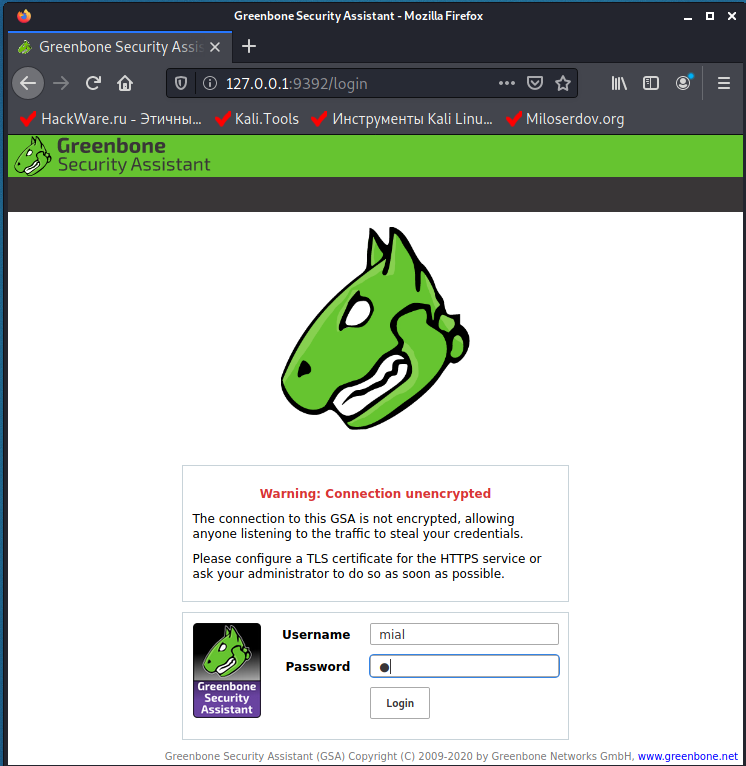 Log in using the credentials that you came up with when creating a new user. 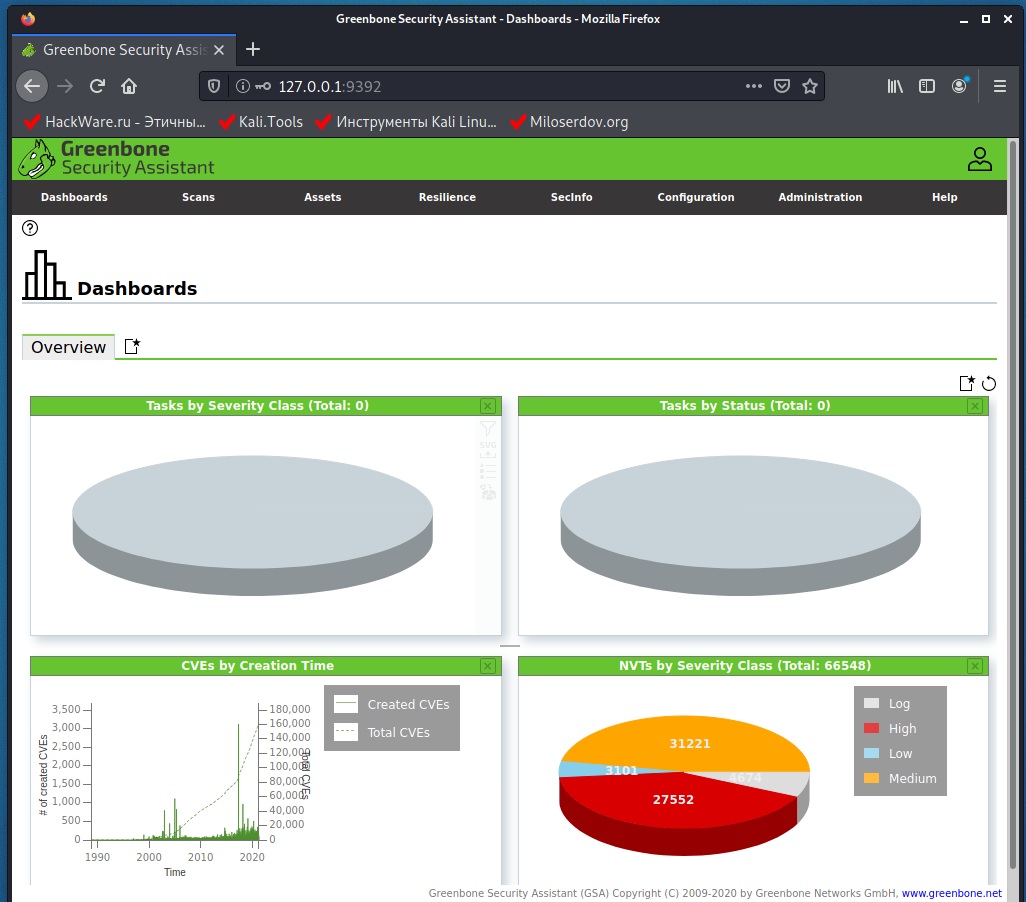 To stop the service:

In the future, sometimes run the command to update signatures:

If something does not work, then you can view the log with the command:

One of the following instructions will be devoted to how to work in Greenbone Vulnerability Management (GVM) (formerly OpenVAS).

And do not forget to write – have you encountered the described errors during installation?