Is it possible to hack Wi-Fi nowadays?

Previously, under articles on the audit of Wi-Fi network security, comments were left in the spirit of “that’s all nonsense, you won’t crack a password for a thousand years”. And this seems to be a correct statement, but if I just need access to the Internet, then practice in different cities and even different countries shows the same result: I can ALWAYS gain Internet access via Wi-Fi.

There are two factors help us:

1. We do not need to hack a specific Wi-Fi network or all networks. It’s enough to find one weak Access Point with an acceptable signal level

2. There are several very effective methods, and if one apply them one by one, then ones will almost certainly be able to find a Wi-Fi network that will succumb

And when I did this, I caught myself thinking that I use a few commands and programs. Actually I use several methods, and I look at my manuals only as a hint for complicated commands. At first, I wanted to make a list of commands that I can’t remember, so that there was something like a cheat sheet. But then the idea came up to collect all the most effective methods, which together always bring me success.

This will be a cheat sheet for both me and beginners, since most methods are fairly simple and almost all are fast.

That is, on the one hand, in this article there will be no new methods that would not have been considered at Miloserdov.org before, but, on the other hand, there will be something like a strategy when combining the least time-consuming and most effective methods You can quickly succeed in gaining Internet access in a new place.

Here is an example of the hacked Wi-Fi networks in my previous place of residence (Asian remote place with three-story houses): 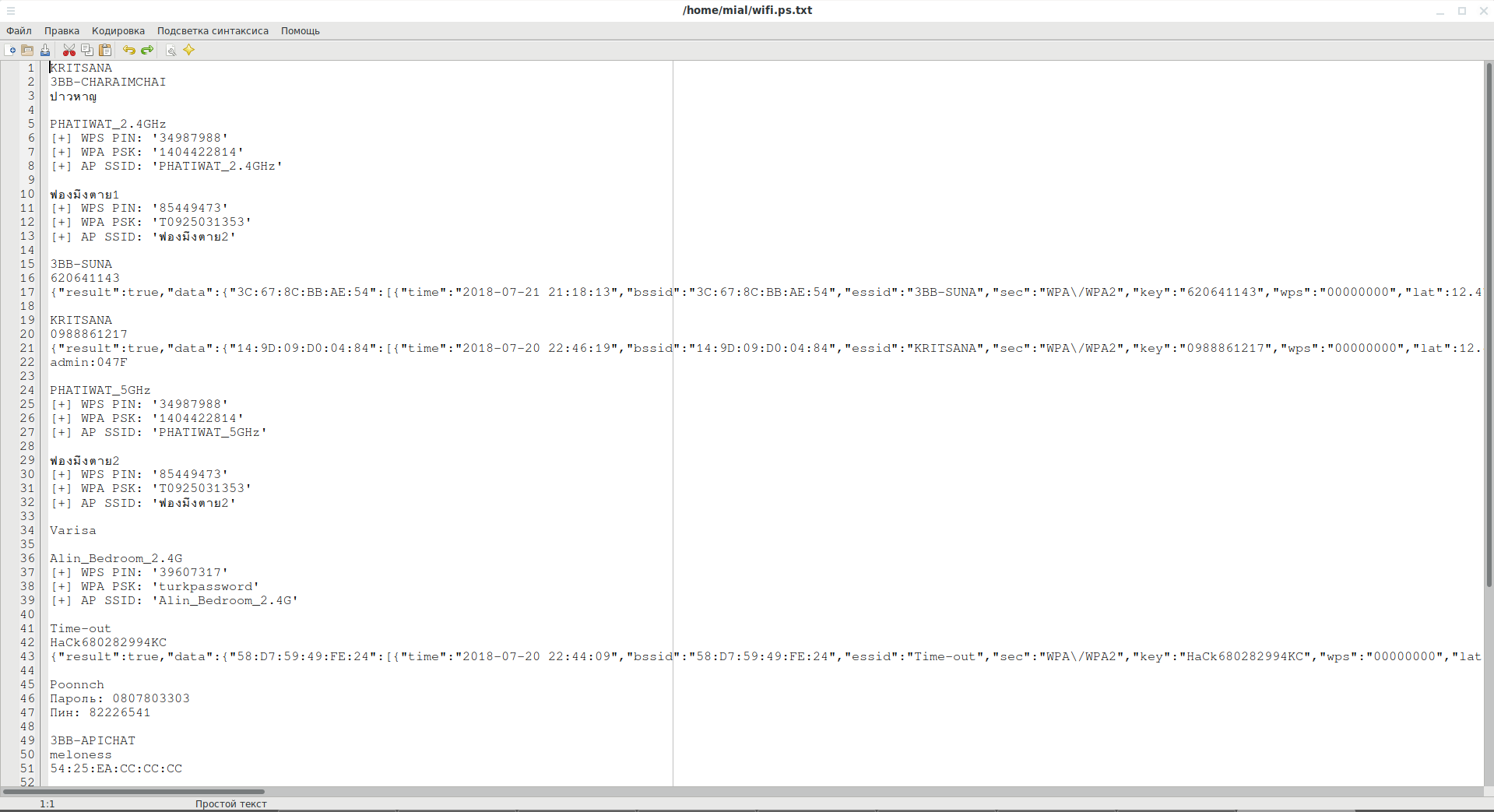 What you need to hack Wi-Fi

1. You need a sufficient number of wireless networks. If you live on the edge of the village and you have within your reach one Wi-Fi network that you can see, then it is invisible that there are not many chances.

The more networks in the area, the better.

2. There are no special hardware requirements, and for some attacks even Wi-Fi adapters that do not support monitor mode are suitable. Nevertheless, I highly recommend adapters with an external antenna, and if the antenna is removable, it is better to buy another bigger one. IMHO, half the ‘skills’ of a Wi-Fi cracker in a large antenna…

Further I will only say “adapter in monitor mode” or “adapter in managed mode”, I will not duplicate these commands.

To view the names of the wireless interfaces and their current mode:

To set a Wi-Fi card in monitor mode:

Or just unplug and plug in the Wi-Fi adapter – by default, it is always turned on in managed mode.

If you stopped NetworkManager, then to run it:

This is the easiest method, it does not require wireless mode, but requires an Internet connection.

See the article “How to get passwords of Wi-Fi hot-spots nearby (without monitor mode)” for details.

After the scan is completed, when the seen APs are checked against the database, the Wi-Fi adapter (which performed the scan) is no longer used. That is, while the check is in progress, you can proceed to the next attack.

If you have another, non-guest 3WiFi account, then in the script itself, replace the API and remove the line

In this case, the script will not pause between checks.

On Windows, you can use Router Scan by Stas'M to view the BSSID, and then search by 3WiFi. See the article “3WiFi: open database of Wi-Fi Access Points passwords” for details. If I am not mistaken, Router Scan can automatically check the Access Points it sees on the 3WiFi database.

The author of the current mod wrote me about the OneShot program in a comment, since then this is my favorite program, I run it even more often than my own WiFi-autopwner script.

This program can only hack passwords from APs with WPS enabled, but monitor mode is not needed. When attacking Pixie Dust, a password can be obtained in seconds. See the article “How to get passwords of Wi-Fi hot-spots nearby (without monitor mode)” for detailed tutorial.

For Windows, Router Scan by Stas'M is an analogue; for details, see the article “How to hack Wi-Fi in Windows”.

Unfortunately, there are not many access points with WPS enabled. Nevertheless, we will return to them. Now we will consider the classic method: capture a handshake and brute-force a password. We will speed up and automate the process partly, for this we will use:

We have to set the wireless interface in monitor mode.

Run the command to collect handshakes:

All handshakes will be saved to the wpa.cap file.

If you are going to hack them all, you can convert all at once to hashcat format using cap2hccapx:

If you only need the hash of a specific Access Point, then use the network name (ESSID) as a filter. For example, I’m only interested in the Wi-Fi handshake of the netis56 network and I want to save it in the netis56.hccapx file:

If you want to split the wpa.cap file into separate handshakes, then use the script from the article “How to extract all handshakes from a capture file with several handshakes”, and then also convert them with cap2hccapx.

For a dictionary attack, I use the rockyou dictionary, a cleaned version can be downloaded from this link. 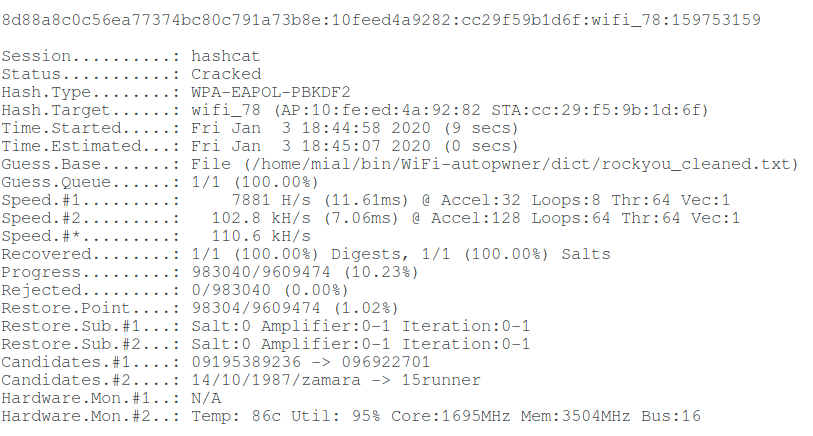 Another example of a successful dictionary attack (hacking time 13 seconds): 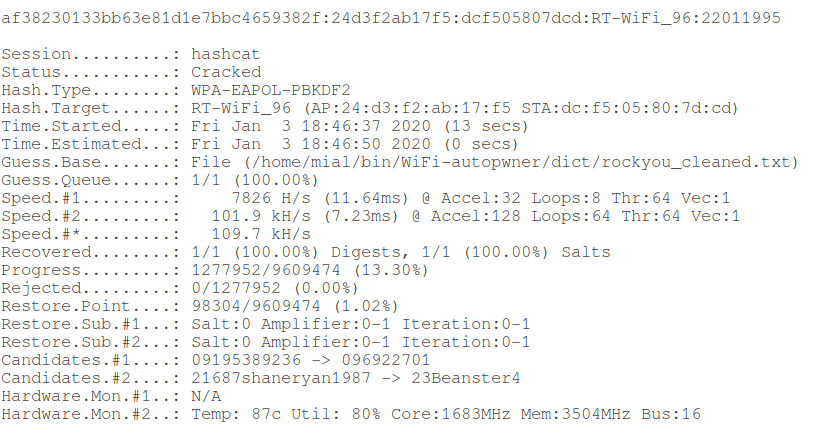 My command to launch:

Mandatory options in this command:

To launch a mask attack:

New in this command:

In addition to passwords of 8 digits, passwords of 9-11 digits are also common (the latter are most often mobile phone numbers, so you can specify a mask with fixed digit as 1?d?d?d?d?d?d?d?d?d?d), but each an additional digit increases the brute-force time by 10 times.

In addition to the already discussed Pixie Dust attack, there is another very interesting attack on Access Points with WPS enabled. The fact is that for some models of routers, pins are generated according to certain algorithms, for example, based on the MAC address of the router or its serial number. Knowing this data, one or more pins can be generated, which are highly likely to be suitable for a wireless access point. 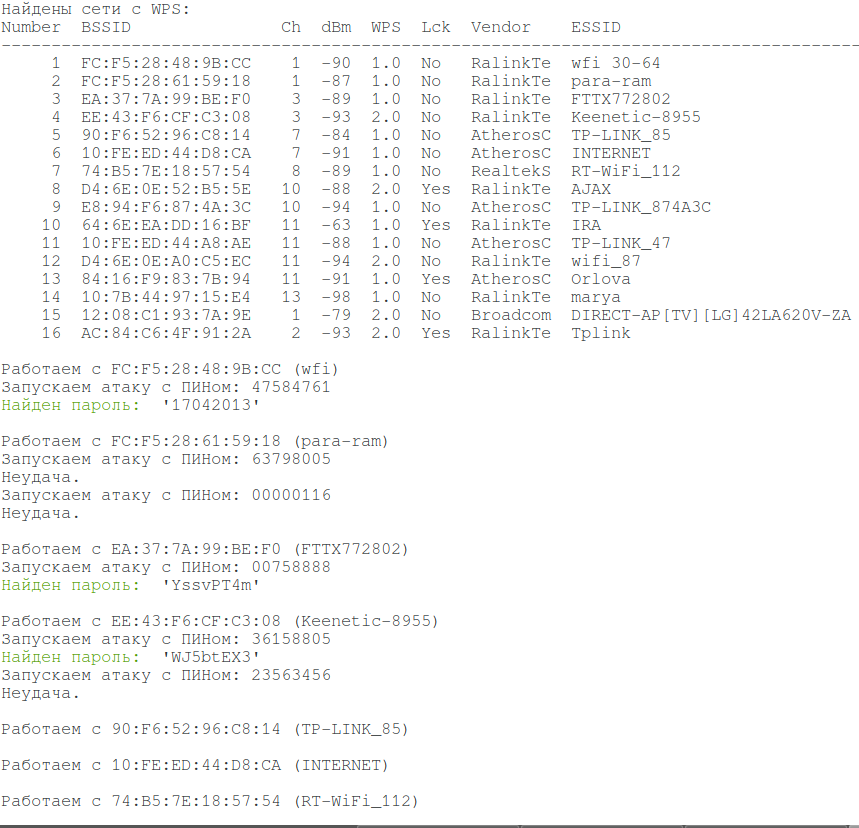 Another similar attack is implemented in airgeddon. But in this program, WPS attacks do not work with adapters based on Ralink chipsets. In this program you need to use, for example, Alfa AWUS036NHA (Atheros chipset). Best with an Alfa ARS-N19 antenna. 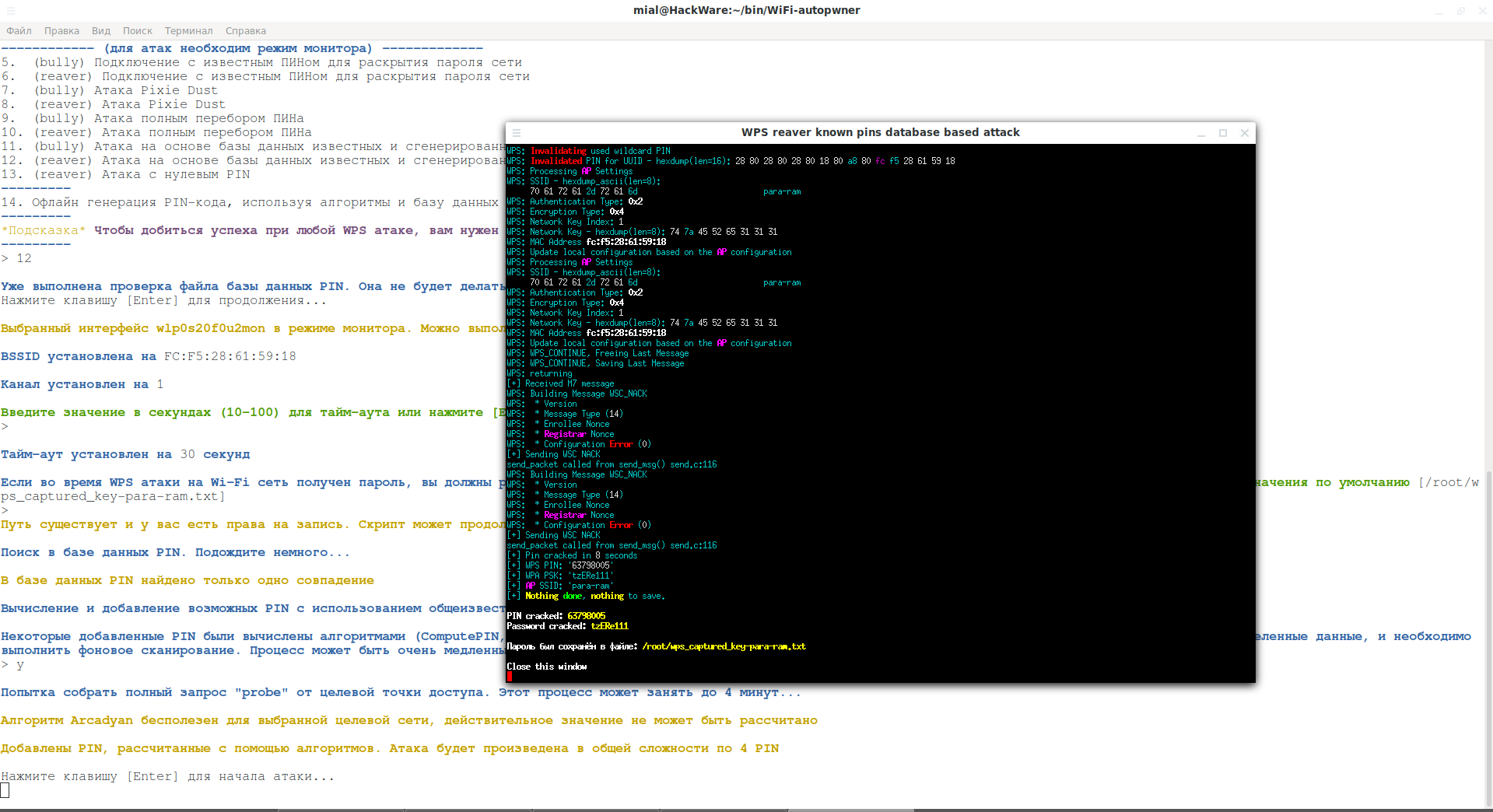 See the article “Effective WPS PINs attack based on known PIN and PIN generation algorithms” for other details.

I have not seen normal open networks for a very long time. But there are enough Captive portals.

Locking system of many of them can be bypassed using the hack-captive-portals program; for details, see the article “Fast and simple method to bypass Captive Portal (hotspot with authorization on the web-interface)”.

As well OpenVPN on the port 53 can be used for this purpose.

A good option for beginners is the Alfa AWUS036NHA with the Alfa ARS-N19 antenna. This is generally a very good Wi-Fi adapter for hacking wireless networks, including for attacking WPS. The disadvantage of this card is that it is quite old and does not support modern Wi-Fi protocols.

To support modern protocols, you can choose Alfa with external antennas from this list.