NetBIOS: what it is, how it works and how to use in information security

Every Windows computer has a computer name. Even if you did not set it, thenthe name generated during the installation of the operating system is written there.

This computer name on the local network can be used as a complete alternative to the local IP address:

See the article “Windows Computer name: how to change and use” for more details.

It does not require any configuration of the DNS or hosts file, since such name recognition is provided by NetBIOS. We have already encountered NetBIOS, or rather, one of its three services – NBT-NS – in the article “Windows Network Authentication Hacking”. This is one of the services that was used to perform the attack.

That is, NetBIOS is important for Windows, as well as for digging in the Windows architecture, analyzing the network activity of Windows and the security issues of local networks and Windows computers.

Naturally, in the best traditions of Miloserdov.org, the article will contain only the necessary theory and maximum practice – we will ‘probe’ the NetBIOS protocol in Wireshark, the built-in Windows utility and in specialized tools for security auditing. But let's start with the theory.

NetBIOS is an acronym for Network Basic Input/Output System. It provides services related to the session layer of the OSI model allowing applications on separate computers to communicate over a local area network. As strictly an API, NetBIOS is not a networking protocol. Older operating systems[clarification needed] ran NetBIOS over IEEE 802.2 and IPX/SPX using the NetBIOS Frames (NBF) and NetBIOS over IPX/SPX (NBX) protocols, respectively. In modern networks, NetBIOS normally runs over TCP/IP via the NetBIOS over TCP/IP (NBT) protocol. This results in each computer in the network having both an IP address and a NetBIOS name corresponding to a (possibly different) host name.

Applications can find through NETBIOS the resources they need, establish a connection and send or receive information. NETBIOS uses port 137 for the name service, port 138 for the datagram service, and port 139. For sessions, any session starts with a NETBIOS request, specifying the IP address and determining the TCP port of the remote object, followed by the exchange of NETBIOS messages, after bringing the session to a close. The session exchanges information between two NETBIOS applications. The message length ranges from 0 to 131071 bytes. The simultaneous establishment of several sessions between two objects is acceptable. When organizing IP transport via NETBIOS, the IP datagram is embedded in the NETBIOS packet. Information exchange occurs in this case without establishing a connection between the objects. NETBIOS names must contain IP addresses. So, part of the NETBIOS address can be of the form IP .**.**.**.**, where IP indicates the type of operation (IP via Netbios), and **.**.**.** is an IP- address. NETBIOS system has its own system of commands (call, listen, hang up, send, receive, session status, reset, cancel, adapter status, unlink, remote program load) and primitives for working with datagrams (send datagram, send broadcast datagram, receive datagram , receive broadcast datagram). All NETBIOS end nodes are divided into three types:

An IP address can be associated with one of these types. B-nodes communicate with their partner through broadcast requests. P and M nodes use netbios name server (NBNS) and datagram distribution server (NBDD) for this purpose.

(Note: SMB, an upper layer, is a service that runs on top of the Session Service and the Datagram service, and is not to be confused as a necessary and integral part of NetBIOS itself. It can now run atop TCP with a small adaptation layer that adds a packet length to each SMB message; this is necessary because TCP only provides a byte-stream service with no notion of packet boundaries.)

In order to start sessions or distribute datagrams, an application must register its NetBIOS name using the name service. NetBIOS names are 16 octets in length and vary based on the particular implementation. Frequently, the 16th octet, called the NetBIOS Suffix, designates the type of resource, and can be used to tell other applications what type of services the system offers. In NBT, the name service operates on UDP port 137 (TCP port 137 can also be used, but rarely is).

The name service primitives offered by NetBIOS are:

NetBIOS name resolution is not supported by Microsoft for Internet Protocol Version 6 (IPv6).

Datagram mode is connectionless; the application is responsible for error detection and recovery. In NBT, the datagram service runs on UDP port 138.

The datagram service primitives offered by NetBIOS are:

The session service primitives offered by NetBIOS are:

In the original protocol used to implement NetworkBIOS services on PC-Network, to establish a session, the initiating computer sends an Open request which is answered by an Open acknowledgment. The computer that started the session will then send a Session Request packet which will prompt either a Session Accept or Session Reject packet.

During an established session, each transmitted packet is answered by either a positive-acknowledgment (ACK) or negative-acknowledgment (NAK) response. A NAK will prompt retransmission of the data. Sessions are closed by the non-initiating computer by sending a close request. The computer that started the session will reply with a close response which prompts the final session closed packet.

When NetBIOS is run in conjunction with Internet protocols (e.g., NBT), each computer may have multiple names: one or more NetBIOS name service names and one or more Internet host names.

The NetBIOS name is 16 ASCII characters, however Microsoft limits the host name to 15 characters and reserves the 16th character as a NetBIOS Suffix. This suffix describes the service or name record type such as host record, master browser record, or domain controller record or other services. The host name (or short host name) is specified when Windows networking is installed/configured, the suffixes registered are determined by the individual services supplied by the host. In order to connect to a computer running TCP/IP via its NetBIOS name, the name must be resolved to a network address. Today this is usually an IP address (the NetBIOS name to IP address resolution is often done by either broadcasts or a WINS Server – NetBIOS Name Server). A computer's NetBIOS name is often the same as that computer's host name (see below), although truncated to 15 characters, but it may also be completely different.

The Windows LMHOSTS file provides a NetBIOS name resolution method that can be used for small networks that do not use a WINS server.

A Windows machine's NetBIOS name is not to be confused with the computer's Internet host name (assuming that the computer is also an Internet host in addition to being a NetBIOS node, which need not necessarily be the case). Generally a computer running Internet protocols (whether it is a Windows machine or not) usually has a host name (also sometimes called a machine name). Originally these names were stored in and provided by a hosts file but today most such names are part of the hierarchical Domain Name System (DNS).

Generally the host name of a Windows computer is based on the NetBIOS name plus the Primary DNS Suffix, which are both set in the System Properties dialog box. There may also be connection-specific suffixes which can be viewed or changed on the DNS tab in Control Panel → Network → TCP/IP → Advanced Properties. Host names are used by applications such as telnet, ftp, web browsers, etc. To connect to a computer running the TCP/IP protocol using its name, the host name must be resolved into an IP address, typically by a DNS server. (It is also possible to operate many TCP/IP-based applications, including the three listed above, using only IP addresses, but this is not the norm.)

How to detect NetBIOS

You can run a regular scan of TCP ports on a LAN using nmap:

And among the results you can find open TCP port 139: 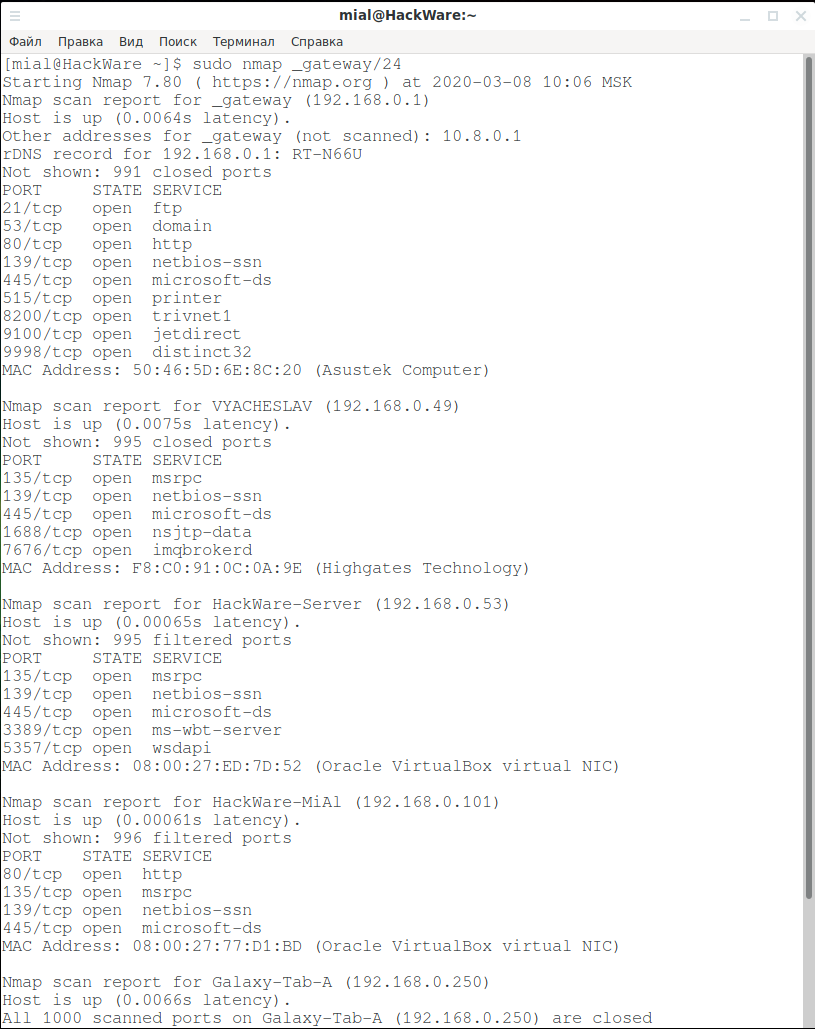 The advantage of this approach is that scanning is much faster and additional open UDP ports are found. 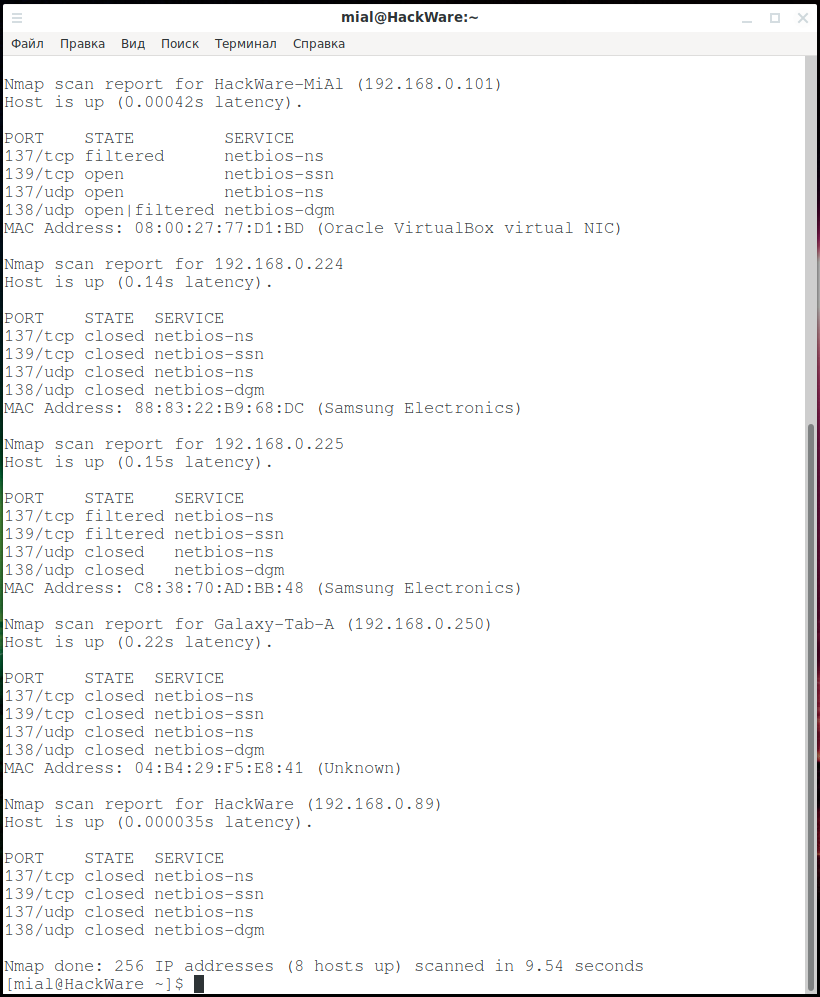 You can use another Nmap usage tip to collect service banners, for this we add the -sV --script=banner options: 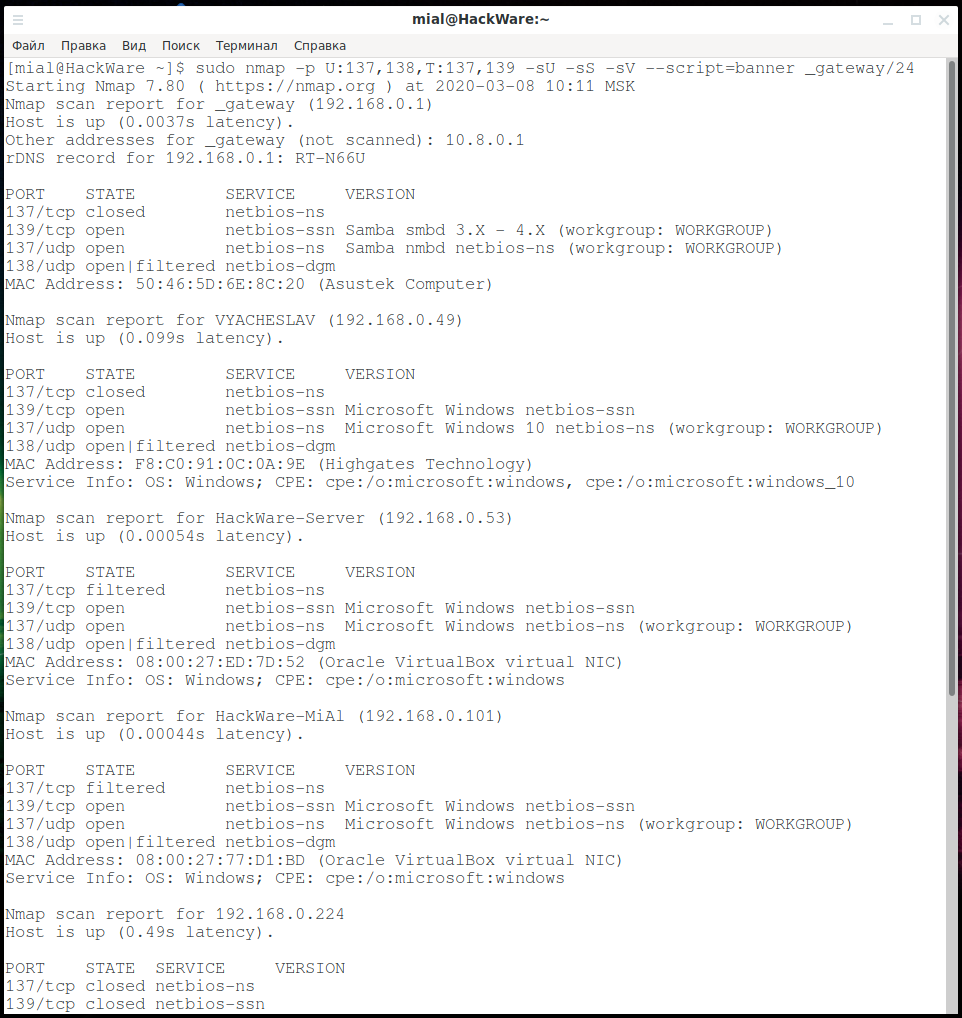 Thanks to the last command, we additionally discovered:

Additionally, you can use Nmap scripts (NSE) – I found 3 scripts that are related to NetBIOS:

Attempts to retrieve the target's NetBIOS names and MAC address.

Attempts to discover master browsers and the domains they manage.

To use them during a scan, the command is approximately the following: 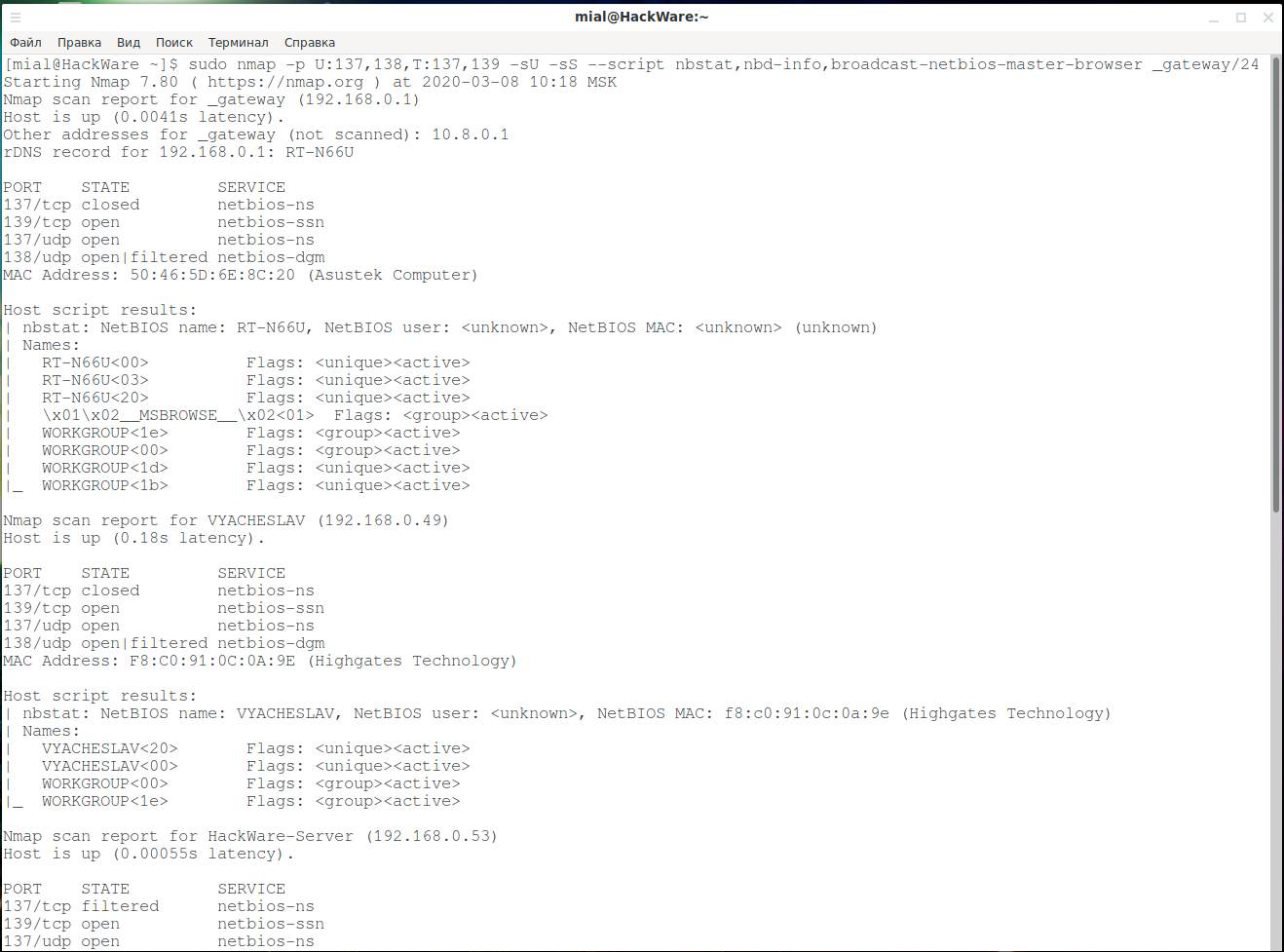 The nbtstat program is designed to display NetBIOS protocol statistics and current TCP/IP connections using NBT (NetBIOS over TCP/IP). The nbtstat program is preinstalled on Windows, that is, it does not need to be downloaded and installed, but it must be run on the command line. See “How to set up the PowerShell environment on Windows and Linux”.

To find out the host name by IP address, use the -A option: 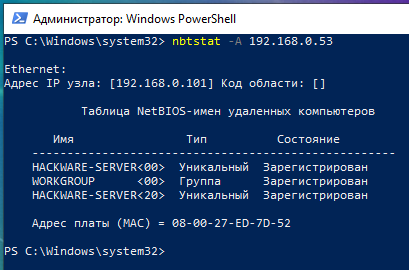 To view the names of computers and their IPs stored in the cache use the -c option: 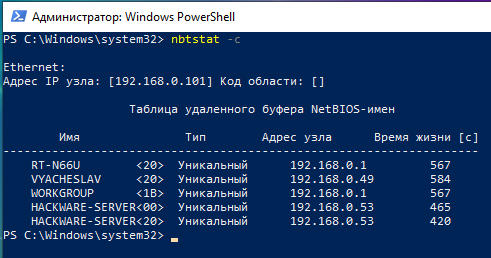 To find out the name of the current computer use nbtstat with the -n option: 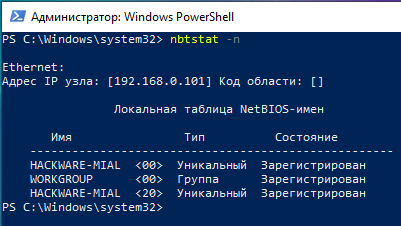 To list names resolved by broadcast and via WINS run the command: 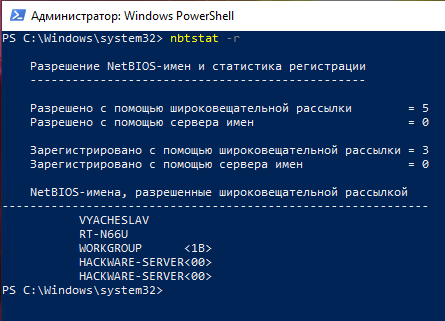 A broadcast request to determine the IP address by computer name: 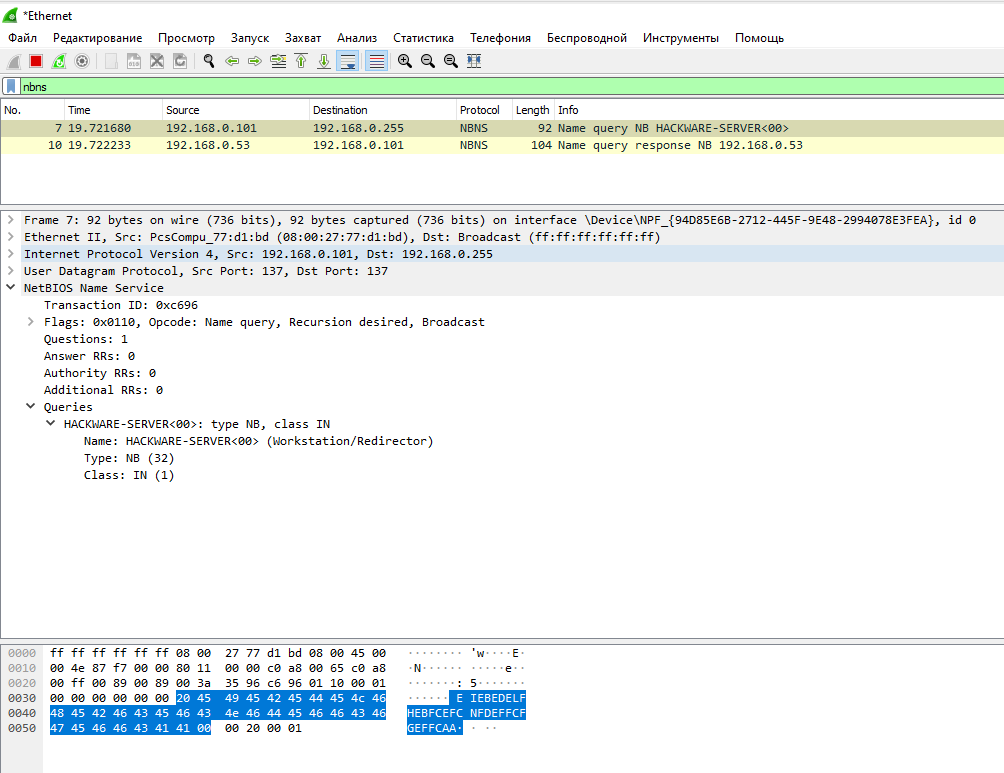 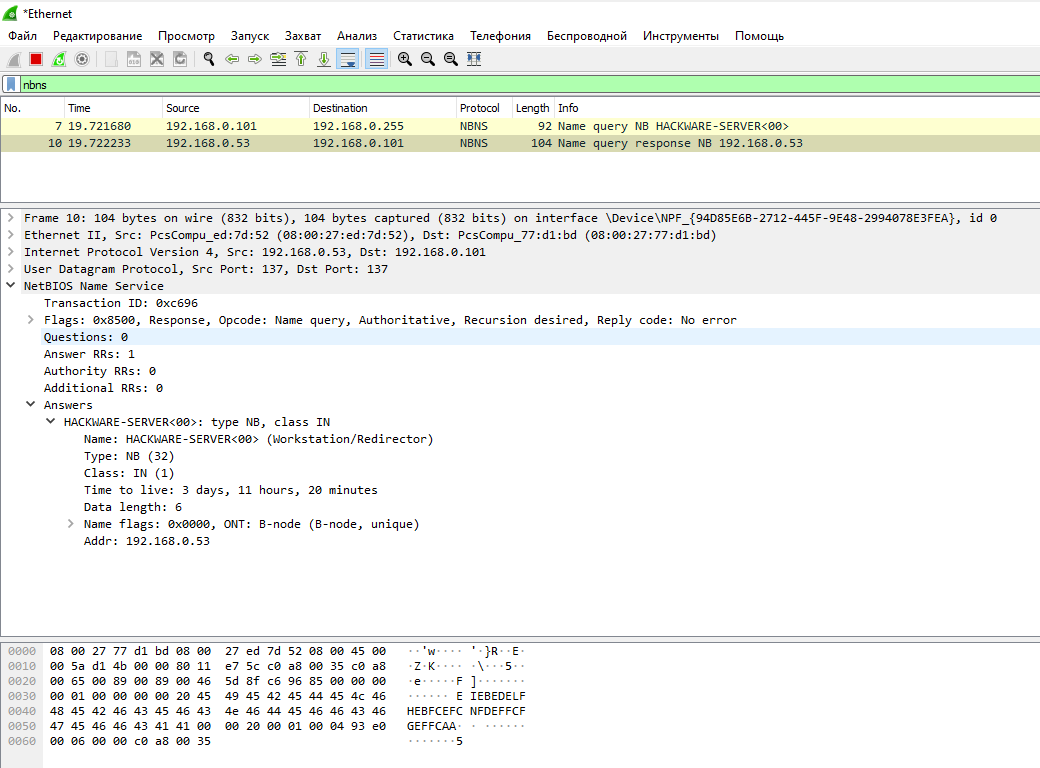 A request to a specific host to obtain its host name: 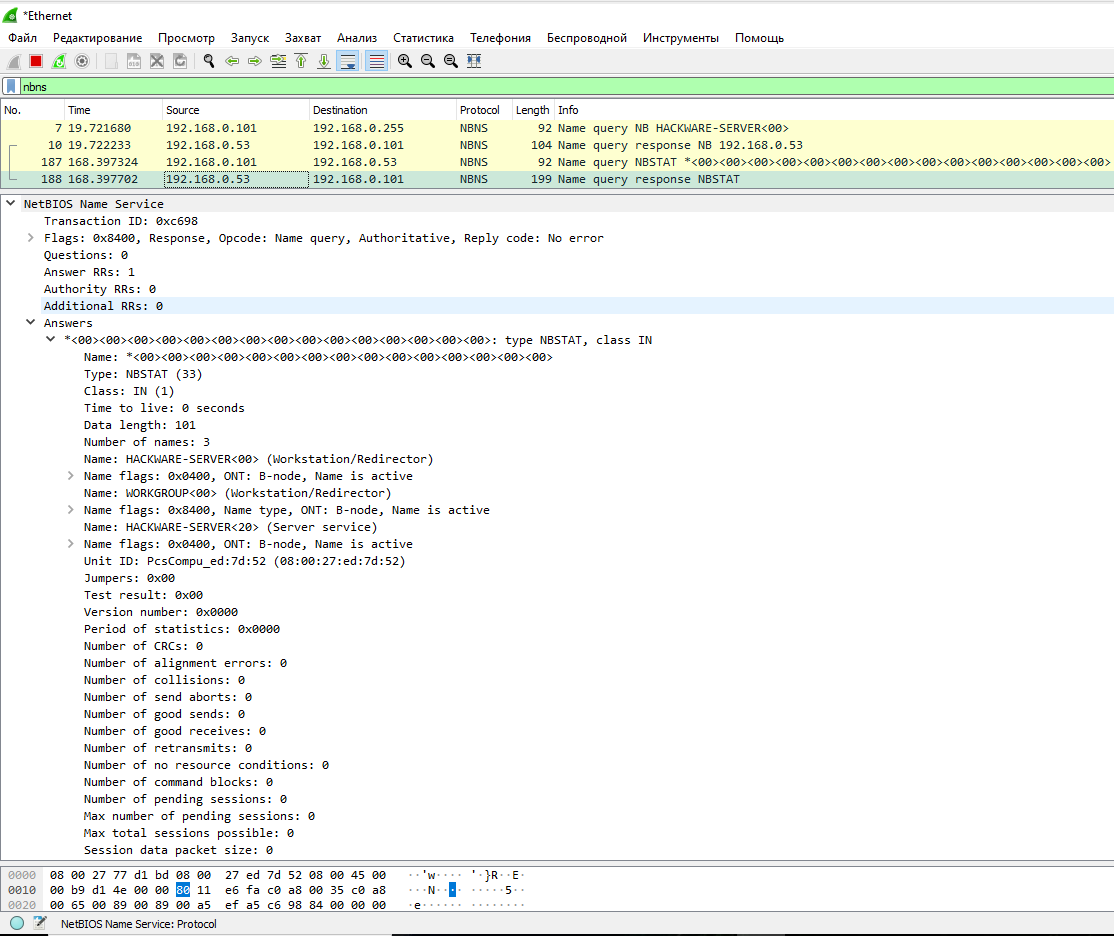 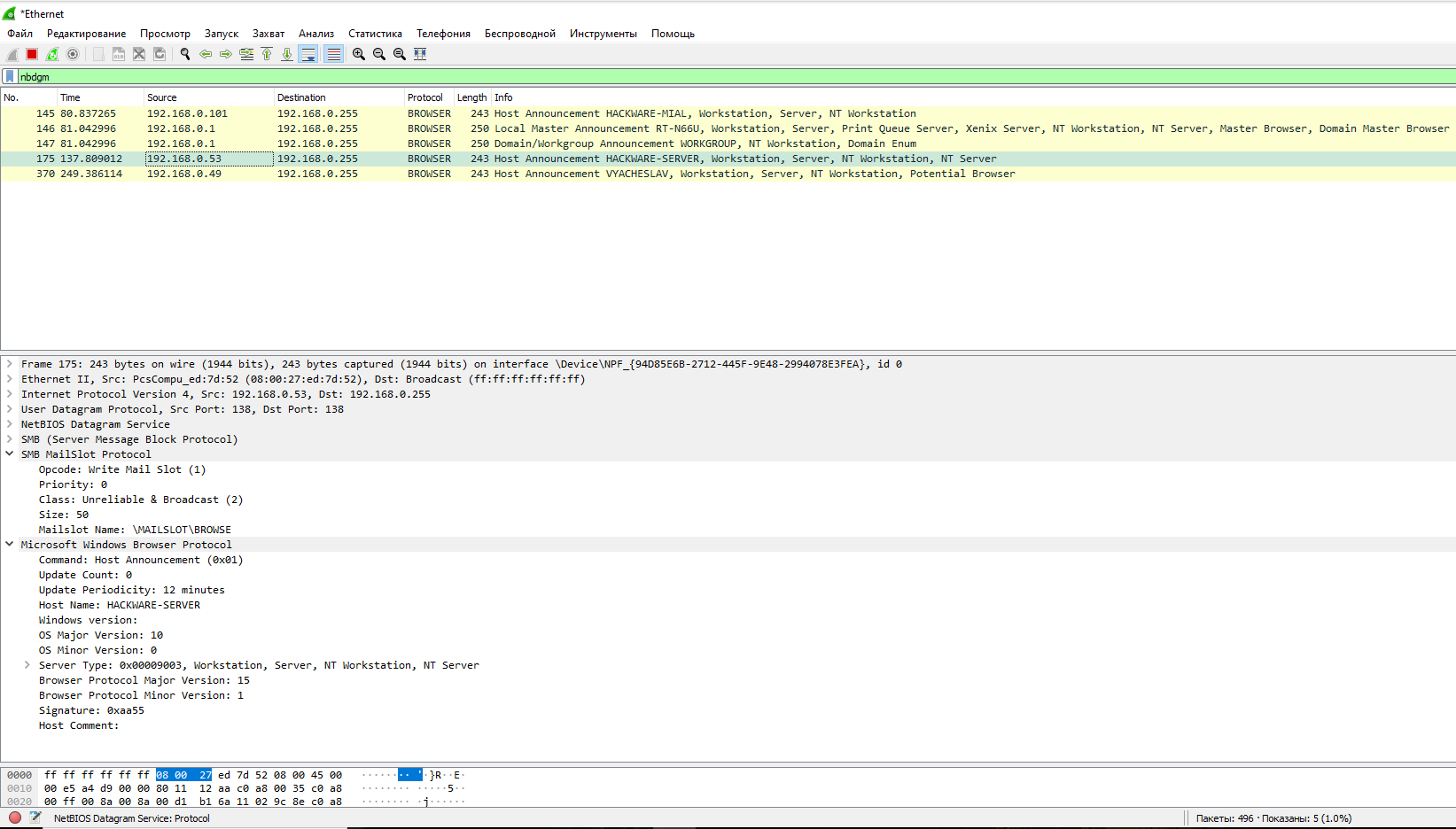 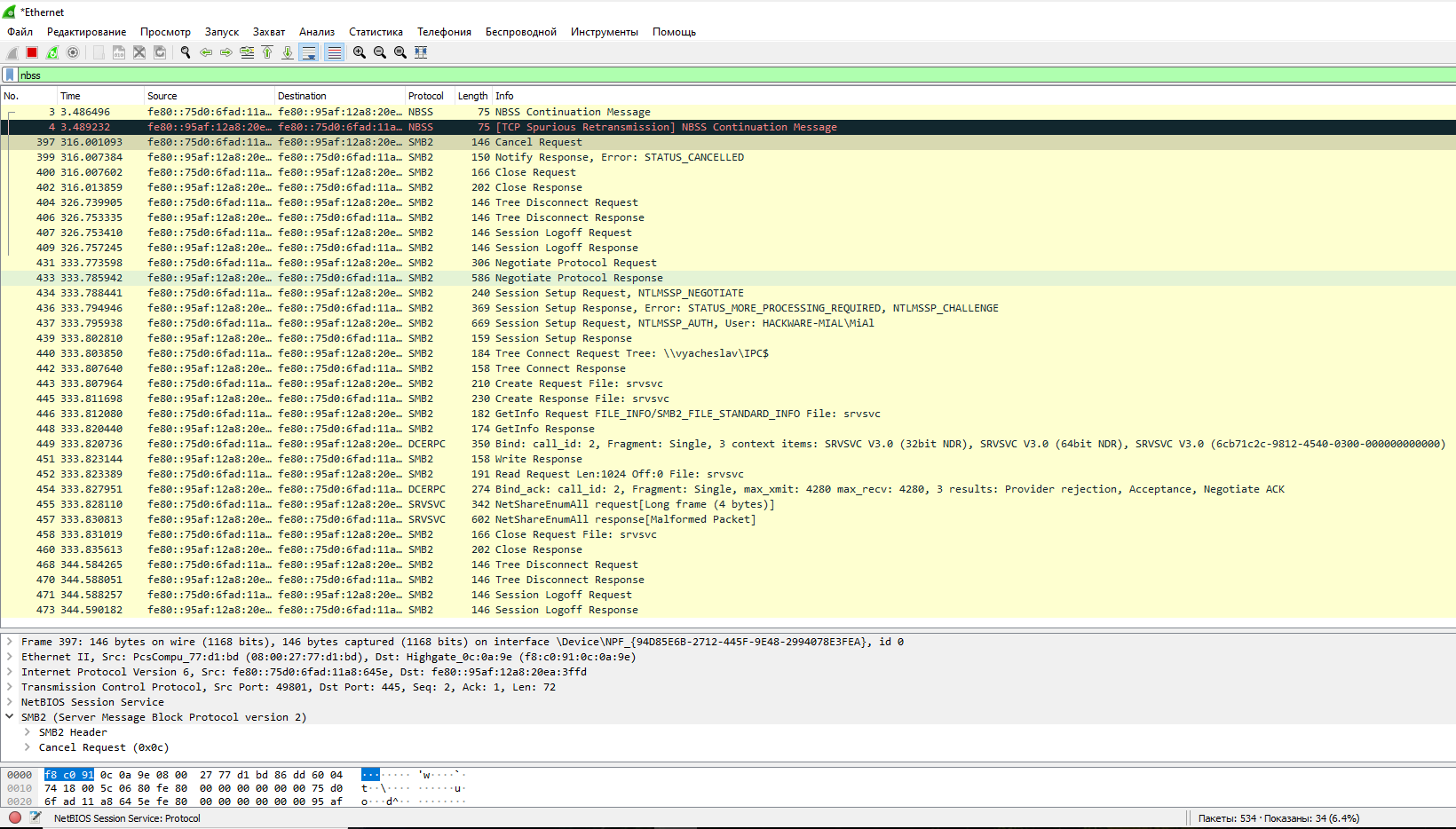 To filter all NetBIOS traffic:

The LMHOSTS (LAN Manager Hosts) file is used to enable Domain Name Resolution under Windows when other methods, such as WINS, fail. It is used in conjunction with workgroups and domains. If you are looking for a simple, general mechanism for the local specification of IP addresses for specific hostnames (server names), use the HOSTS file, not the LMHOSTS file.

The file, if it exists, is read as the LMHOSTS setting file. A sample file (lmhosts.sam) is provided. It contains documentation for manually configuring the file.

The syntax for the LMHOSTS file is the same as for HOSTS, i.e.:

NetBIOS security audit program can be divided into 2 groups:

The programs for scanning NetBIOS are mostly abandoned, since almost all information (name, IP, MAC address) can be gathered either by the standard Windows utility or by the Nmap scanner.

As for NetBIOS spoofing tools, there are quite a few mordern programs among them, usually including spoofing of NetBIOS services as part of a complex attack.

The following is a brief overview of the tools, since the scanning tools are too simple to talk about them much, and the spoofing tools are too complex to be considered in this article – each of them deserves its own article or even a few tutorials on their various functions.

Inveigh is a PowerShell ADIDNS/LLMNR/NBNS/mDNS/DNS spoofer and a man-in-the-middle attack tool designed to help penetration testers/red timers that are limited to Windows.

Inveigh tutorials are being prepared for this program for Miloserdov.org website.

An example of starting an inspectation without attack: 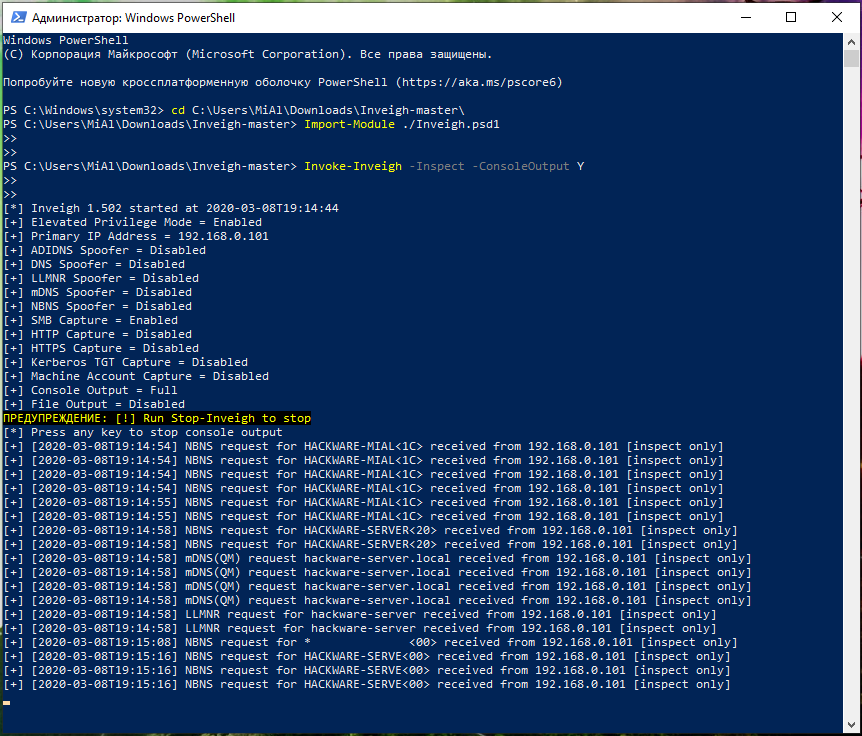 nmbscan scans the shares of a SMB/NetBIOS network, using the NMB/SMB/NetBIOS protocols. It is useful for acquiring information on a local area network for such purposes as security auditing.

It can discover all the NMB/SMB/NetBIOS/Windows hosts on a local area network by using the hosts lists maintained by master browsers.

The source code can be downloaded from this link: http://nmbscan.g76r.eu/down/nmbscan-1.2.6.tar.gz 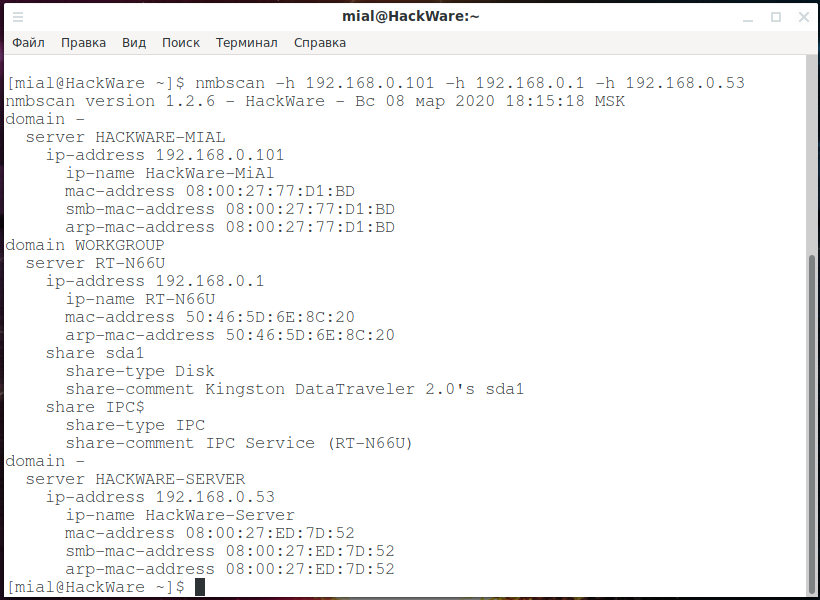 To scan a subnet (very slow):

This tool can be used to check Windows workstations and servers if they have available shared resources. 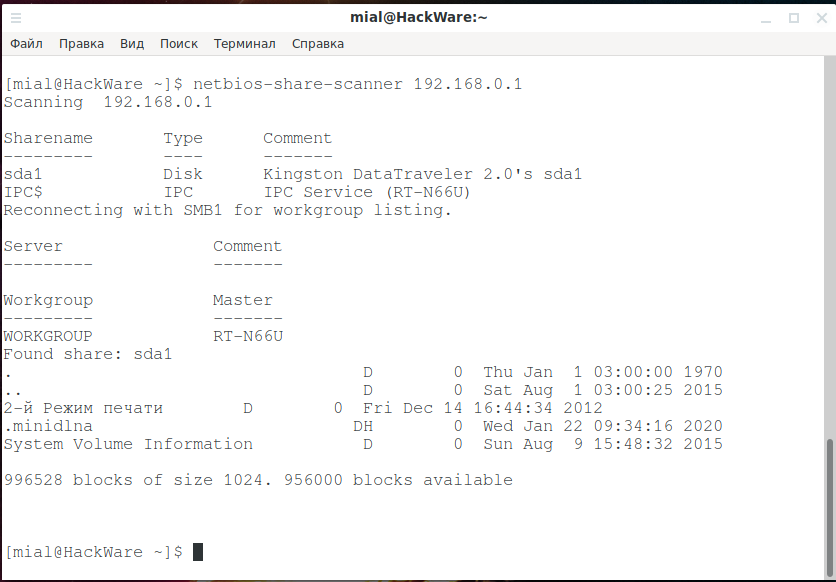 A family of tools designed to simulate Windows hosts (NetBIOS) on a LAN (local area network).

The source code of the program (written in Python2).

A utility for Windows that can be used to list NetBIOS information from a single host or range of hosts. To run on Windows.

Several tools for exploring, attacking and communicating with NetBIOS and DNS.

Decodes and displays all the names of NetBIOS packets received on UDP port 137 and more! To run on Windows.

The last two programs did not work for me.